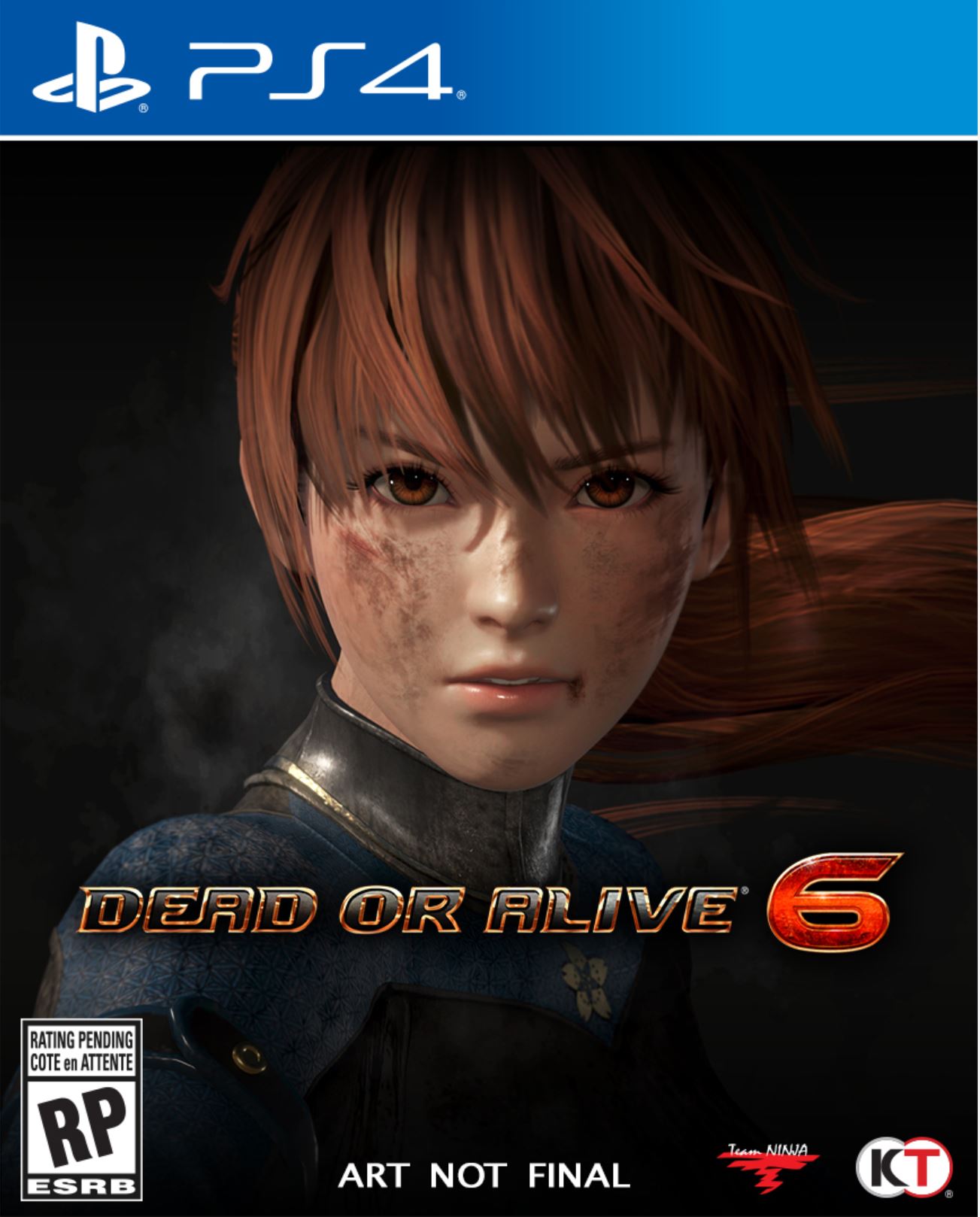 Sometimes it’s difficult to figure out how many games are actually in a franchise with numbered entries. Street Fighter is notorious for this, as Street Fighter V Arcade Edition is something like the 912th Street Fighter game. Dead or Alive is another celebrated fighting franchise that uses a comparable numbering system, with 2012’s Dead or Alive 5 being the fifteenth DOA title and Dead or Alive 6 being the 24th entry. Sure, the franchise has taken a couple breaks from fighting to enjoy some beach volleyball action which is included in that game tally, but after seven years it’s time for a brand new mainline Dead or Alive title.

Dead or Alive 6 doesn’t offer too much in the way of surprises for Dead or Alive fans. Out of the initial batch of characters, only two characters are new to this entry, which are NICO and Diego. Long time fans will be familiar with the other 22 fighters initially available. The frenetic fighting feels familiar, as will the Dead or Alive staple of interactive arenas where fighters can end up in new locations or have third parties interfere with the match. Too much familiarity does negate the need for the new title, and there are some new tweaks to help Dead or Alive 6 feel like a new game.

The fighting mechanics in Dead or Alive 6 have been overhauled with the 4-Way Hold system, which adds an element of realism to the martial arts combat. Offense is only half of the equation and this system allows players to make defensive maneuvers more retaliatory. Using the thumbstick with the appropriate buttons, players are able to catch incoming attacks and perform a throw or hold on their opponent. Conceptually this doesn’t seem like a big deal, but once the player gets the hang of it, this is a useful mechanic and can turn the tide of a fight when the player is getting pummeled, which is a much more satisfying approach than simply blocking and waiting for an opportunity to strike. A Special command button has been introduced, which is deadly in the hands of a skilled player, but also helps level the playing field for novices. When the meter is fully charged the special button can unleash a devastating series of attacks, but even without being charged, it can do a powerful stunning attack. This next part is a little trickier, but proper timing can use the charge to use a defensive move that can nullify the most brutal of attacks from the opponent. 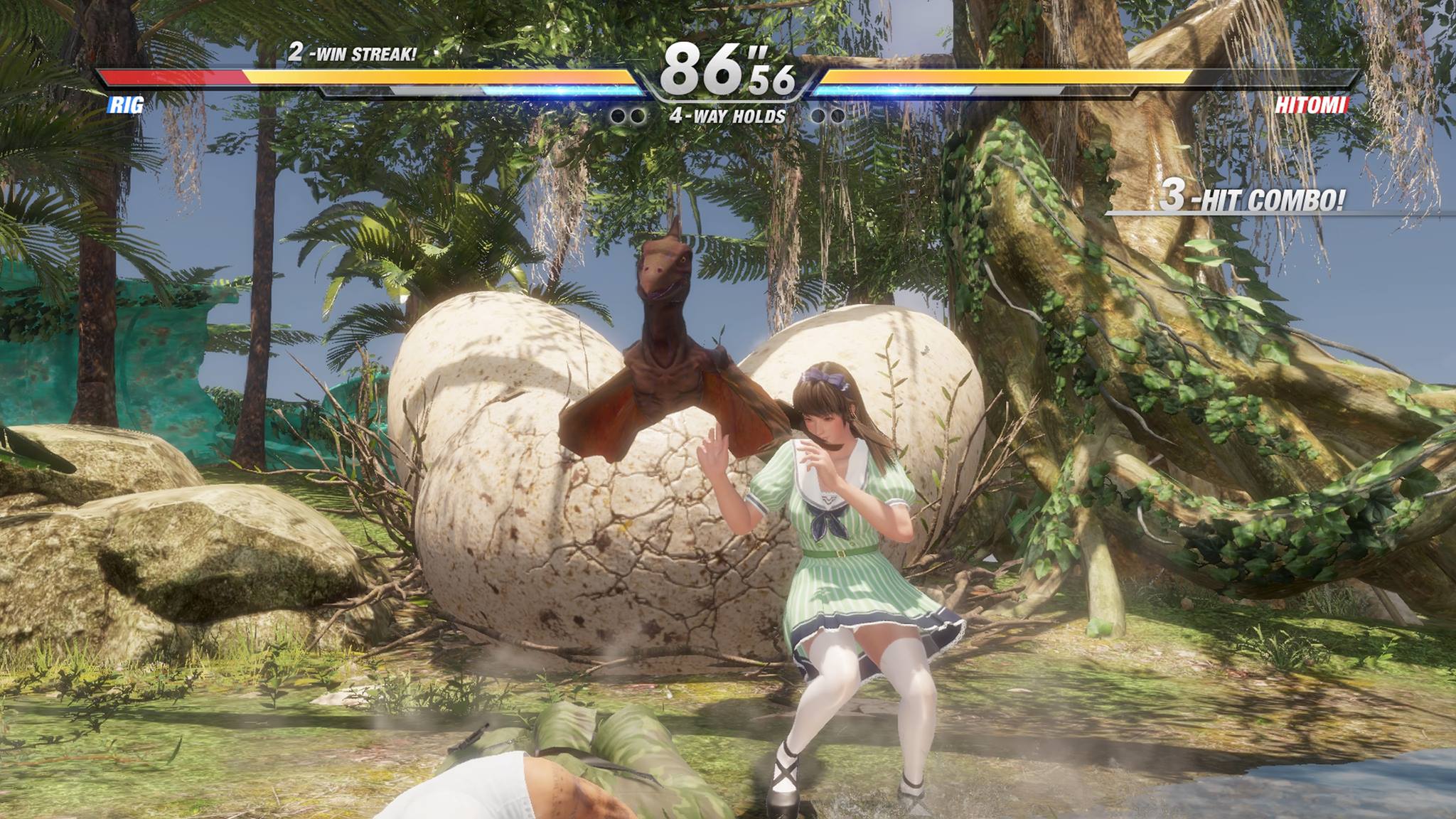 Dead or Alive 6 has a few different game modes to keep players engaged. The first one we’ll look at is the Story Mode, which features eight chapters. The story stages are laid across a grid and completing certain stages will unlock other chapters for different characters. The story itself isn’t the most in depth or always the most clear, but is an interesting enough device to put players into the next fight. Fans may appreciate the references to previous Dead or Alive titles by such things as mentioning Project Epsilon. In addition to some background information for individual characters, some of the story arcs focus on Raidou and the sixth Dead or Alive tournament. The difficulty is forgiving in this mode with a difficulty spike at the final boss but even with that the story can be completed in only a few hours. There isn’t a whole lot of reason to come back to the story once completed, but it’s interesting enough where the playthrough was enjoyable.

There’s a fair amount of single player content in addition to the story. These modes include Arcade, Survival, Time Attack, Versus, Training and DOA Quest. Most of these are pretty self explanatory to any fighting game fan. Arcade is eight consecutive matches where the player is awarded money for completing it and strives for the highest score. Versus is just individual fights that can be played against another person or against computer AI. Survival is trying to withstand an onslaught of multiple opponents without full health regeneration between fights. Time Attack is trying to beat multiple opponents in the shortest amount of time possible. Training is where the player can learn the ins and outs of fighting, which includes basic tutorials, combo training and combo challenges, with that last one being geared to make training more enjoyable. For training purposes it succeeds, but enjoyable by training standards is not the same thrill as an all out fight. 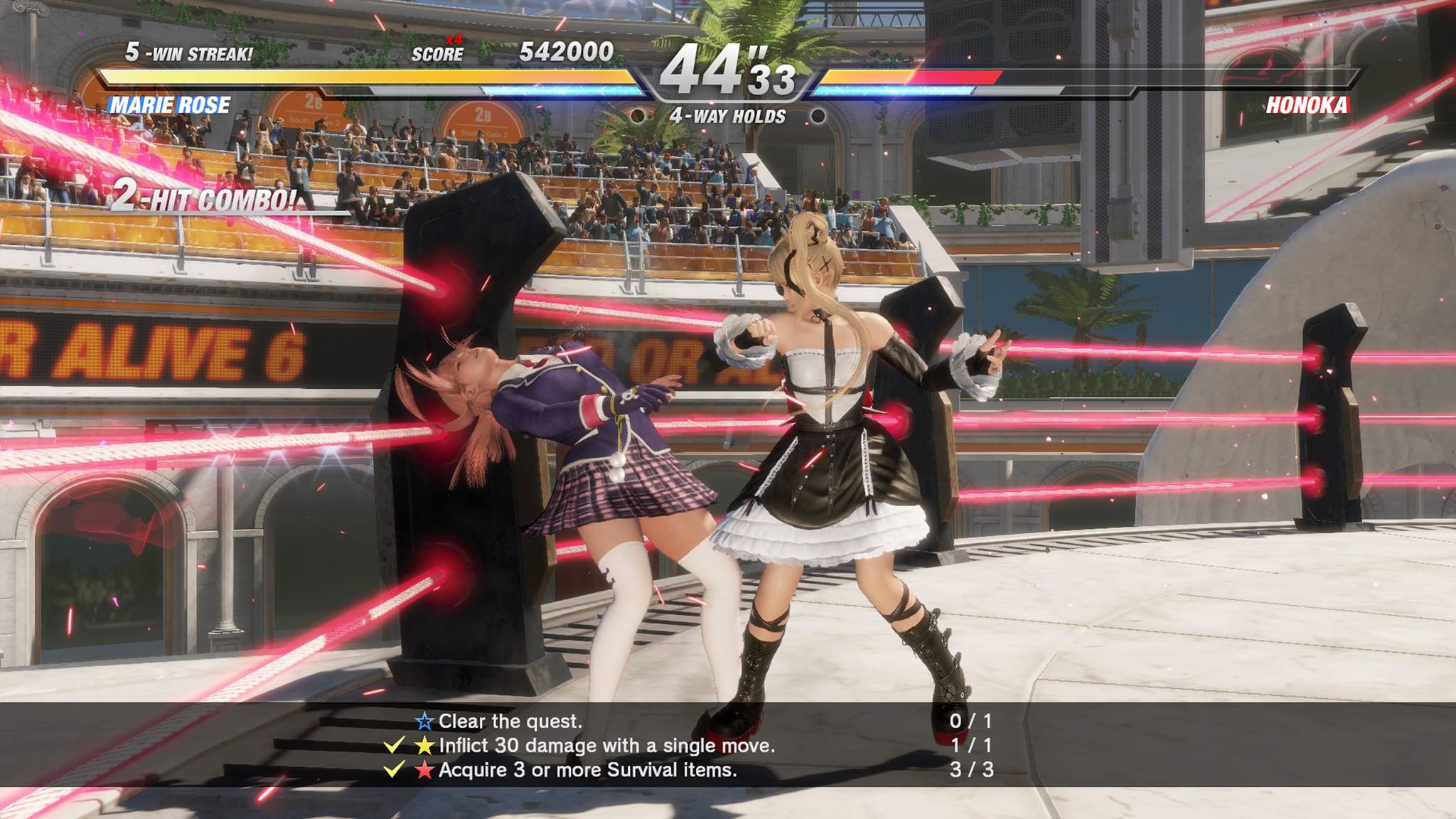 DOA Quest is a mode where the player takes on special challenge matches. Each match has three stars that can be earned by completing different objectives, such as beating the opponent within a certain time limit or performing a specific move multiple times. This mode is actually more fun than originally expected. Completing the challenges make the fights more engaging and strategic than regular matches, and the game offers tutorials for objectives the player didn’t get the first time, which helps eliminate the frustration factor and also teaches the player how to play the game in a way that is more entertaining than just playing the tutorial. Earning stars rewards the player money to spend on costumes and earning all three stars on a match will earn some of the required fabric for a specific character’s specific outfit.

Dead or Alive 6 offers a fair amount of collectibles. There are several outfits for each character available for purchase, along with various accessories and hairstyles to allow for some customization of how characters look. Unlocking all of these can be a bit of a grind. There is a player level, which increases whenever the player plays certain modes and there are character levels that increase whenever a character is played. Increasing these levels unlocks more customizable pieces, but even if the player saves up enough money they’ll need to complete the specific challenges in DOA Quest to get the material needed for the costume they want. Grinding is always a chore in any game, but at least grinding in Dead or Alive 6 can be done in small enough doses and the game itself is enjoyable. 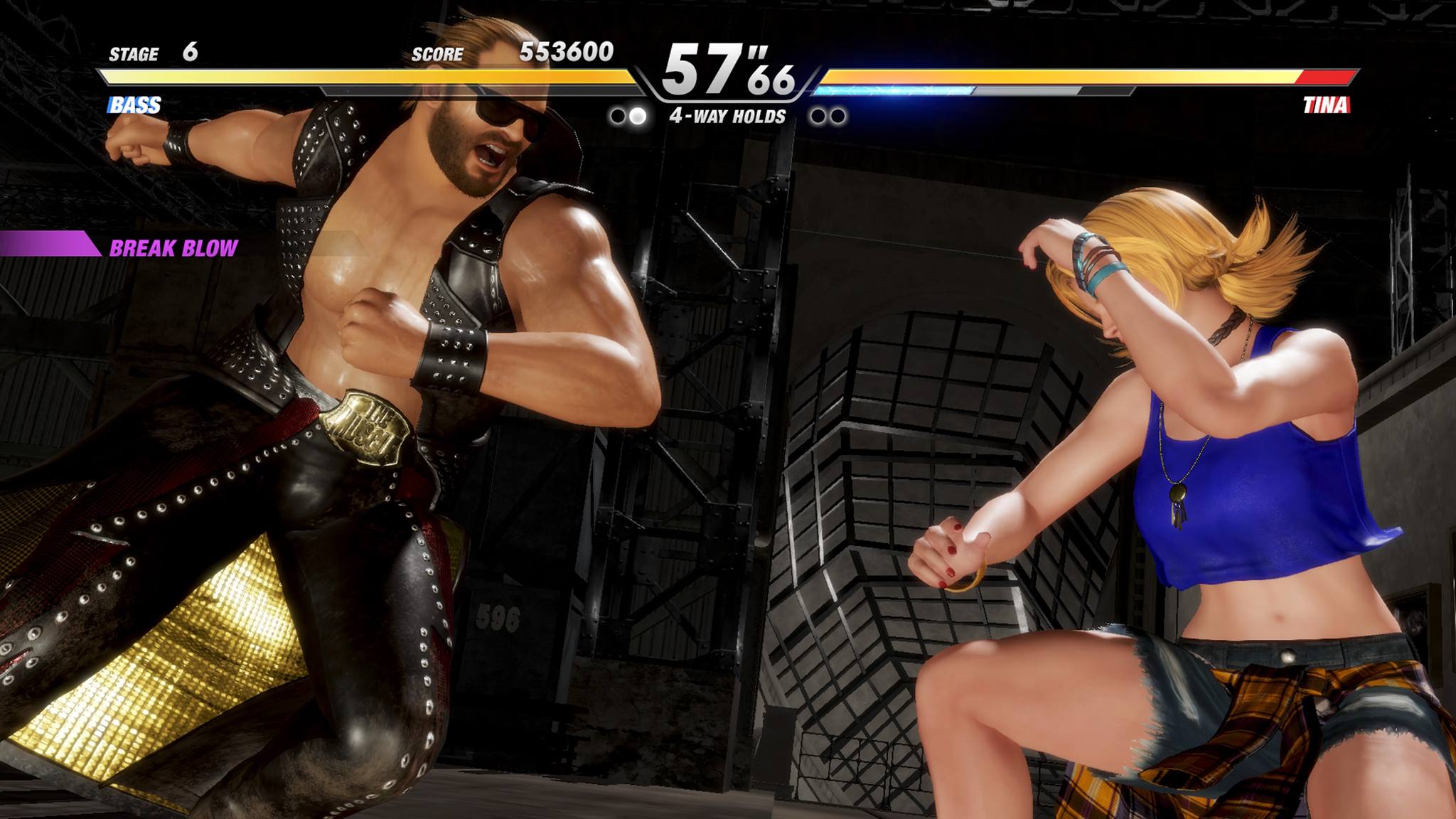 The bulk of Dead or Alive 6 play sessions for most people will be competitive multiplayer. Playing against another person is a completely different dynamic than against the computer, and with online and local options available, there is plenty of opportunity to throw down against other people. Currently there is only ranked matches where the game matches the player up with an opponent, but an online lobby is coming in an update later on in March. From what is available finding an opponent to fight is a fairly quick process. Players will move up the ranks by earning rank points through winning matches. Completion of matches, whether win or lose, will net the player some money along with some materials for a random character’s outfit which can alleviate grinding through materials through trying to get all the stars in DOA Quest. In its current state the online component isn’t much to write home about, but the hope is the upcoming lobby update will improve this.

Dead or Alive 6 is a blast to play thanks to great game mechanics and combat design. The 4-Way Hold system and special button give the game a bit of a rock paper scissors system which also gives more depth to the fighting mechanics than one would expect from simply watching a gameplay video. Learning all there is to know about the fighting system does require to actually use the Tutorial mode, but for people who don’t want to master every character’s move set, the controls are rather intuitive. The fighting is fast paced which helps make playing multiple bouts against a friend easy. The visuals are stunning and the developers obviously put a lot of work into the interactive stage backgrounds, where slamming an opponent into the right part of the arena can lead to a dinosaur attack, tank uprising or releasing the Kraken. The characters themselves have a lot of detail as well and as the fight progresses we see them sweat, bleed, bruise and even have their clothing take damage. Prior to this title’s release, there was some talk from the developers about making the female fighter’s proportions less exaggerated and toning down the breast physics. This is up for some debate as a few of them look more realistic but some of the other ones appear rather enhanced. Fans of the physics need not worry though, as they have been toned down but not eliminated. 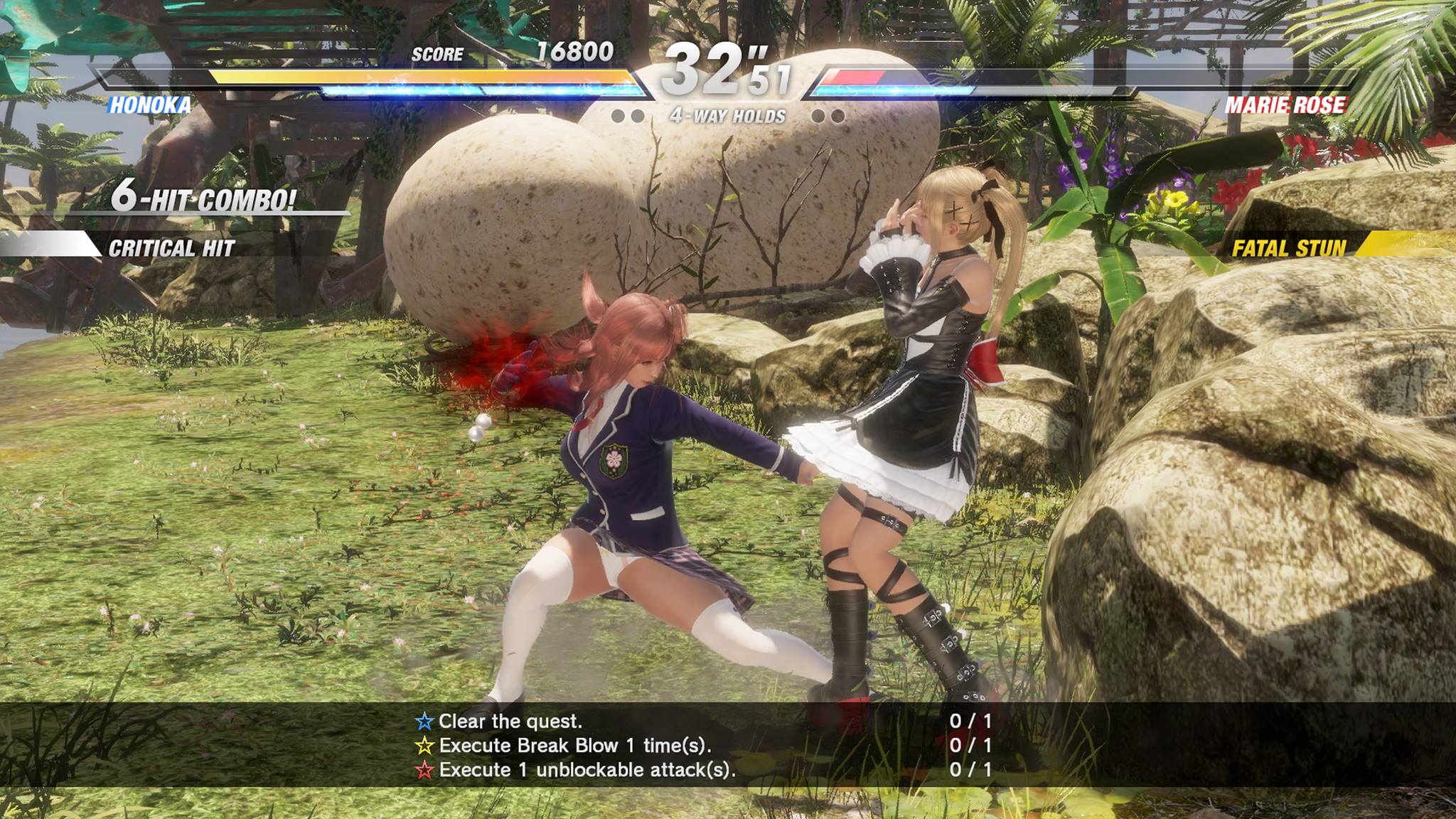 Dead or Alive 6 doesn’t make any drastic deviations from the previous titles, but adds just enough new features to feel fresh and exciting. The changes that were implemented in the training mode help make what is traditionally one of the most boring game modes enjoyable and helps a lot with mastering the fighting mechanics. The different game modes and amount of collectibles such as trivia entries and wardrobe items provide plenty of single player content, but the main attraction is playing against other people. Dead or Alive 6 shines the most at its most basic level, which is two people just beating the living snot out of each other. Simply put, Dead or Alive 6 is an incredibly fun fighting game, with enjoyment that can be found in each of its several game modes.