The purity of the human is overrated.  Sure, it comes with a matched set of arms and legs with hands or feet at the ends, and there’s nothing really wrong with the standard-issue head, but just imagine the possibilities in spring-feet or replacing a spare hand with a flame-cannon.  Heck, the spinal column is just sitting there acting as the structural support for the entire body when it could be doing so much more!  All it takes is the right mutation from a few spare strands of DNA and you can become just about anything.  Or at least your clone can.  The “you” that exists has the all the genetic modifications it’s going to get, but the cloning creche in Beacon keeps on pumping out new versions of stranded privateer Freja Akiyama, and each new life is a chance to get a bit stronger at the expense of her once-human form.

The planet Kovus-18 is probably the worst place to be marooned.  It’s been wiped from all records despite obviously having been partly explored and it’s crawling with native life and hostile robots, all of which have it in for anyone setting foot on the surface.  Freja’s landing zone is relatively safe, but in classic action-roguelike fashion, the moment she steps outside its protection she finds the entire world has changed in every way except its desire to kill her.  The clone bay doesn’t seem to have any limit on the number of Frejas it can pop out, other than only being able to make one at a time, so death is just another chance to come back a little more prepared than before. 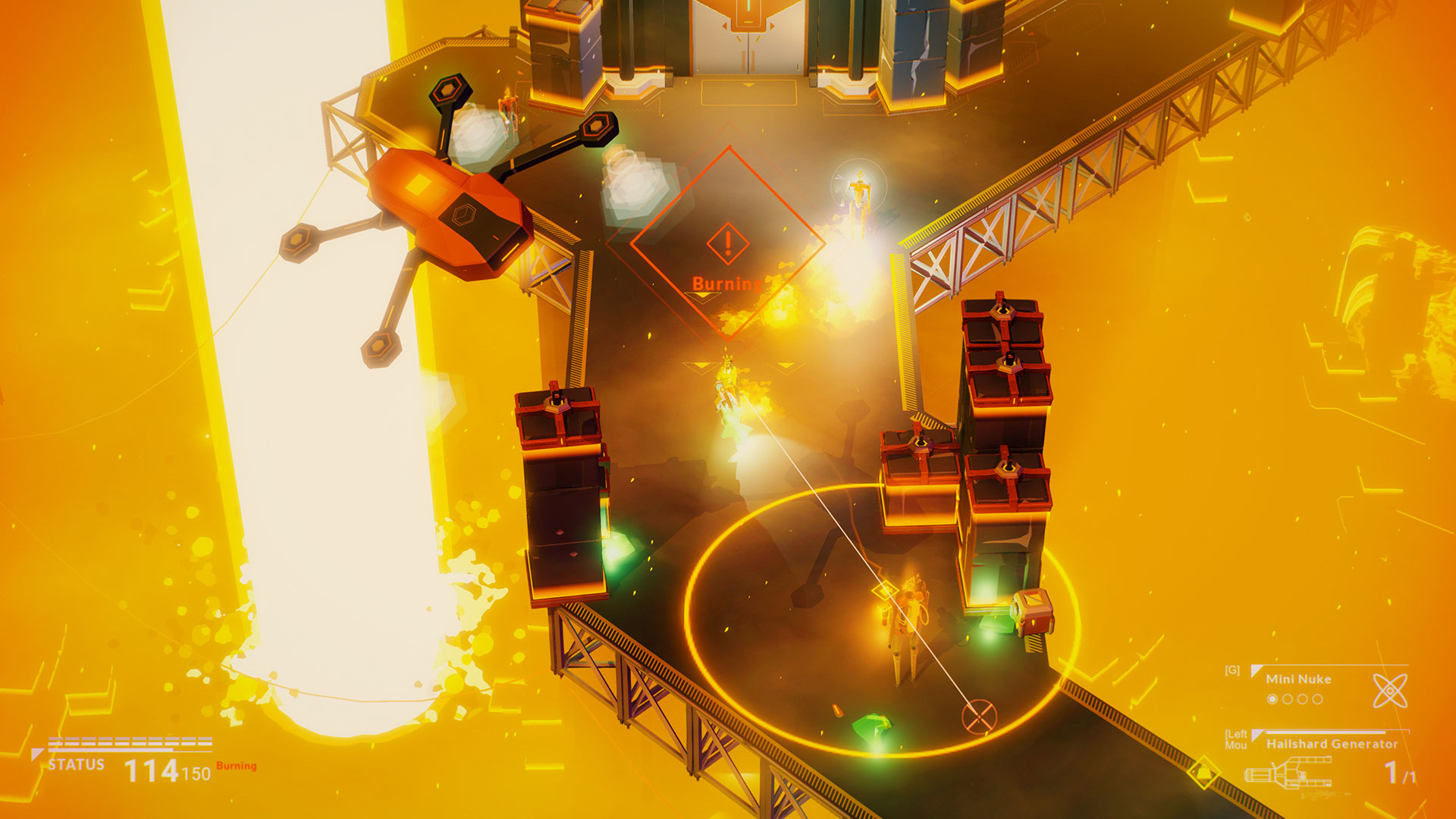 Each run in Beacon starts exactly the same.  Freja stumbles out of the cloning pod, and after a second’s orientation, is ready to try to locate her distress beacon again.  All she’s got to begin with is a pistol, which isn’t a bad little weapon, but not particularly impressive either.  Other than the standard run & gun plus a melee strike her only other normal ability is a dodge roll, which doubles as a jump over the occasional gap, but Kovus-18 has plenty of pickups scattered about the cliffside paths that make up the bulk of its terrain.  Grenades are fairly common, as are single-use pickups that give momentary ability boosts such as electric attacks, extra speed, drone helpers, etc, but there are plenty of other goodies to find as well.  New weapons are fairly scarce while stat-boosting pickups or multi-use secondary abilities are rare and frequently hidden, but their rough location is marked on the map so you can try to figure out how to find them.  These items are only good for the single run, but DNA hangs around for a while.

Every enemy, whether wildlife or robotic, has a chance to drop its DNA.  It’s not any good for the current run, but after the inevitable end, you get to not only browse through the DNA you’ve found but also graft a few strands onto Freya’s genome.  Each piece has its positives and negatives, with the good generally outweighing the bad, and you’ve got five slots to place them in while trying to balance Freye’s stats so she doesn’t end up too weak in any particular ability.  The DNA lasts for five lives, and in addition to its bonuses, it has a chance to cause a mutation as well.  Hitting the Sequence button locks the loadout into place and then the system runs through each strand to see if anything happens.  Once a strand is mutated you’re stuck with it for as long as the DNA is active and the results can create major changes in how you approach each run. 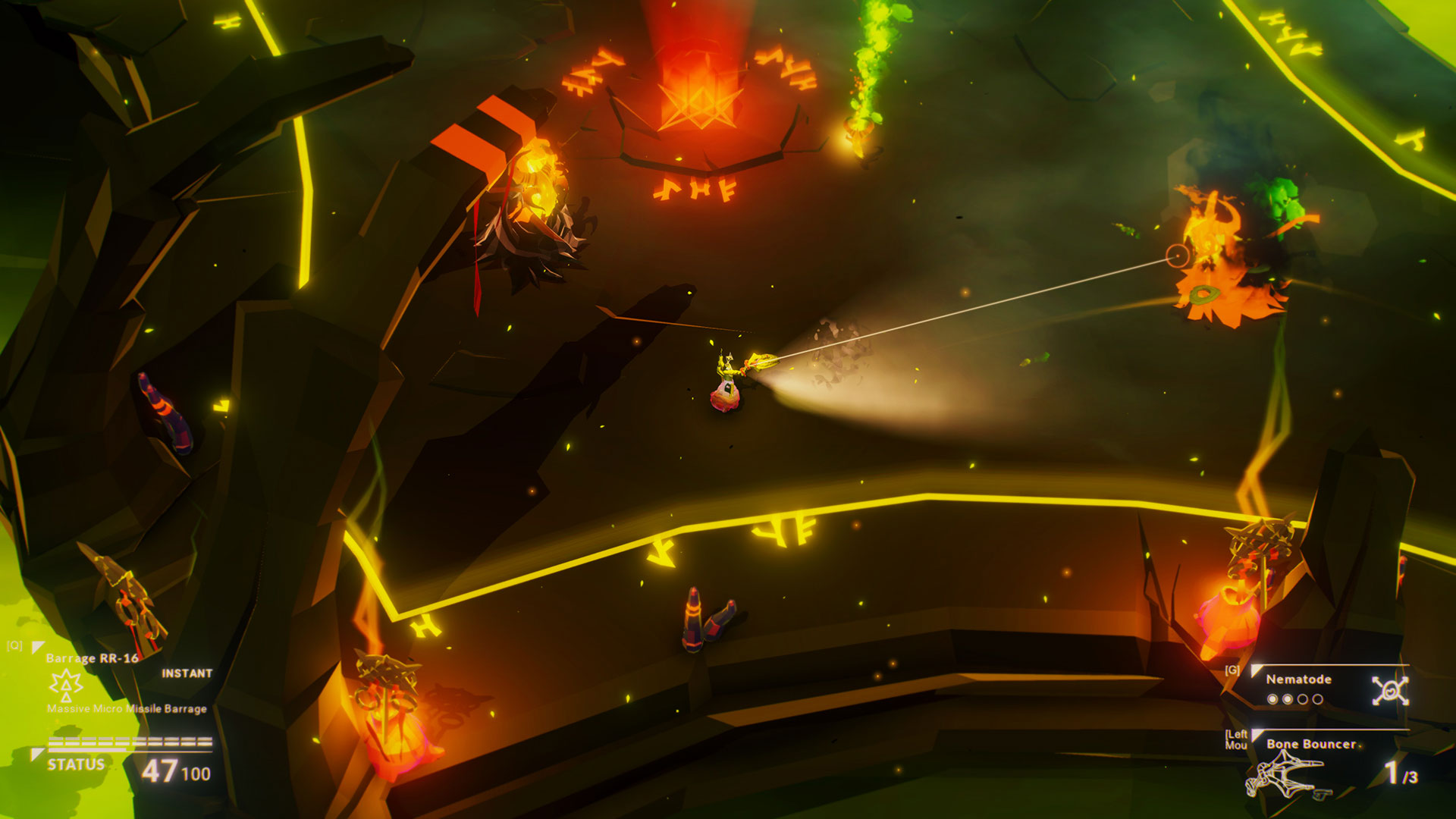 Freja can mutate in her arms, legs, feet, spine and head, and when all five are changed at the same time, she’s almost completely alien.  Supplement her spine with a gas tank and she gets a revenge explosion when taking a hit, or swap out her normal feet for elephant-style stumps and she no longer takes falling damage at the expense of losing the dodge roll.  There are a huge number of possible mutations, many of which work together and a few that are at odds with each other, and the trick is to figure out how to make use of the good ones while minimizing the effects of the ones that just aren’t helpful.  Releasing a cloud of rot spore on a melee attack sounds like a good plan until discovering it also poisons you for a bit, and I’ll admit to committing accidental suicide when punching a tree for health-giving fruit only to realize I’d also created a death-haze.  Whoops…

While Beacon is a clever action-roguelike with a fantastic sense of sci-fi style, there’s no escaping that it’s also very early in its Early Access period.  One of the worst bugs that prevented continuing has been fixed already, but even so I’ve died by being shot into the air with an enemy that doesn’t actually have that as an attack, by committing suicide due to being stuck on a ledge with no way off, or being killed by an enemy hidden by a piece of scenery that can’t be moved due to the fixed camera.  Aiming is best with mouse and keyboard while movement feels much better with a gamepad, but a gamepad makes the menus slow and clunky.  There’s a huge amount of polish and tweaks needed in Beacon‘s coming updates, but the game is under active development and updates from its months on itch.io came at a fairly rapid pace.  There’s no reason to expect the Beacon of a few months from now won’t have these issues addressed, but for right now it’s worth being aware you’ll need some patience with the development process. 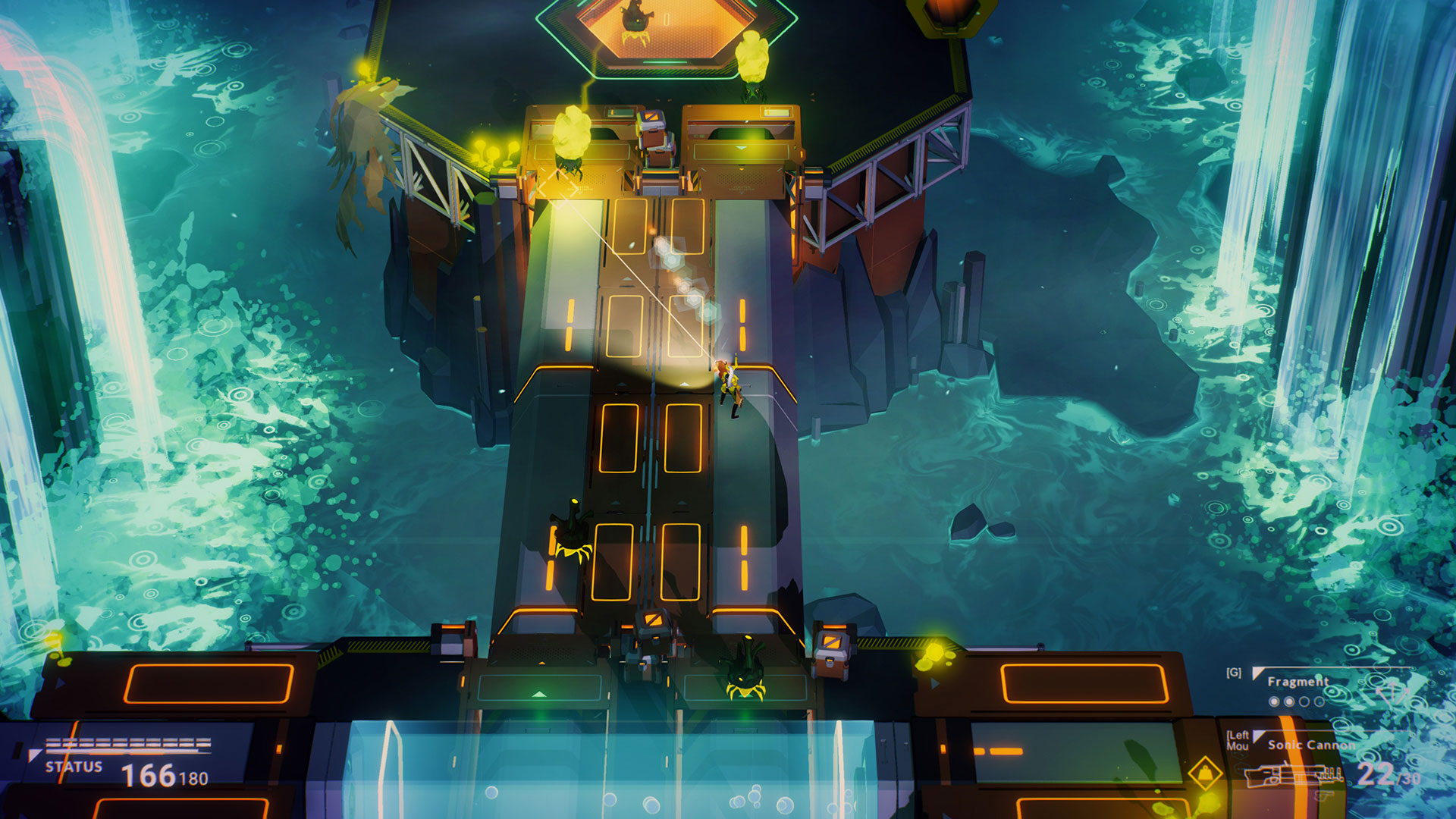 While a bit rough around the edges, Beacon is still an incredibly sleek, stylish trek across a sharp-looking sci-fi landscape.  The multiple biomes feature a nice variety of aliens, monsters and robots to pump electro-plasma into, with the combat broken up by intricate levels hiding goodies just off to the side or buried under several layers of secrets.  Death is inevitable but the chance to become a freakishly-mutated abomination takes the edge off the failure, with the next life being a new adventure that just might have the right mix of skills to make serious distance into the mysteries of Kovus-18.  It’s a hostile, lonely planet that has no use for humanity, but with the right mutations, a lot of firepower, and a few months of bug-squashing and overall polish it just might be possible to climb the pile of clone-corpses to escape.