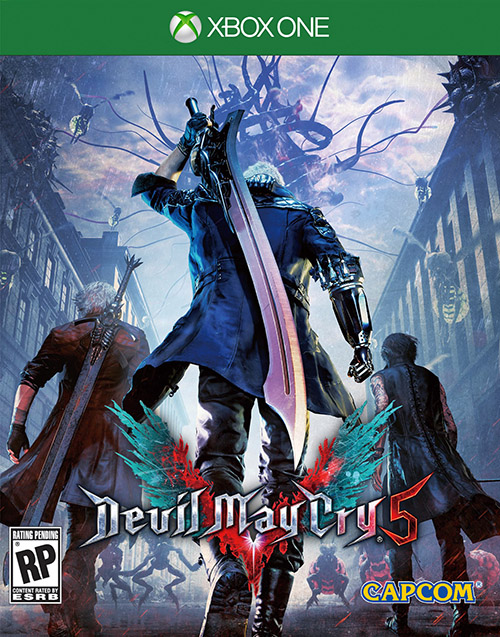 For over a decade, Devil May Cry fans have been anticipating a sequel to their beloved franchise. While Capcom decided to go in a different direction when they handed Ninja Theory the license to create the divisive DmC, it only made veterans more fired up to get back to the Dante they know and love. Granted, the prequel was and still is a fun distraction, but it had a far different tone from what we’ve come to expect when it came to the character action series, not to mention a wildly more rebellious take of our wise-cracking hero. Well, after so long, we finally have Devil May Cry 5, a proper sequel that brings back not only Dante, but the boyish Nero, and a brand new mysterious figure by the name of V. It has the style, but does it have the substance to go along with it?

The story is broken up between three different characters: Dante, Nero and V. While the first two are franchise veterans, or at least to a certain degree, V is the newcomer to the story, so it’s a little off-putting that he doesn’t really get a proper introduction until the latter half of the campaign. He is with Nero and Dante right from the prologue and he keeps us in suspense until his twist/revelation occurs much later on. Unfortunately, most of the story of Devil May Cry 5 is pretty mediocre. It’s essentially a monstrous demon called Urizen has emerged in the real world and unleashed the apocalypse, absorbing as much human blood as possible to become the strongest living being. It’s up to Dante, Nero and V to defeat him and save the world, with only a couple (predictable) twists that are ham-fisted into the plot. Even the conclusion, which is supposed to link everything together, feels underdeveloped and undeserved, sending us a confused state for the last couple of minutes before the credits rolled. Heck, it feels a little artificially spaced out near the end when there are three missions that, if were like earlier missions in story, would have been compressed into one with multiple character choices. Instead, you are tasked with completing each of the characters’ paths just so Capcom can hit that twenty mission goal. In terms of characters, there’s a wide range, but they don’t always come off well. Dante is still the loveable, fun-loving individual, Nero tries to offer some sarcastic whit, but more times than not comes off as a child, and V is a mysterious goth-like individual who likes to spout cryptic gibberish. Thankfully, Devil May Cry has never really been known for its story, but instead for its fast-paced and enjoyable combat, something the fifth entry nails. 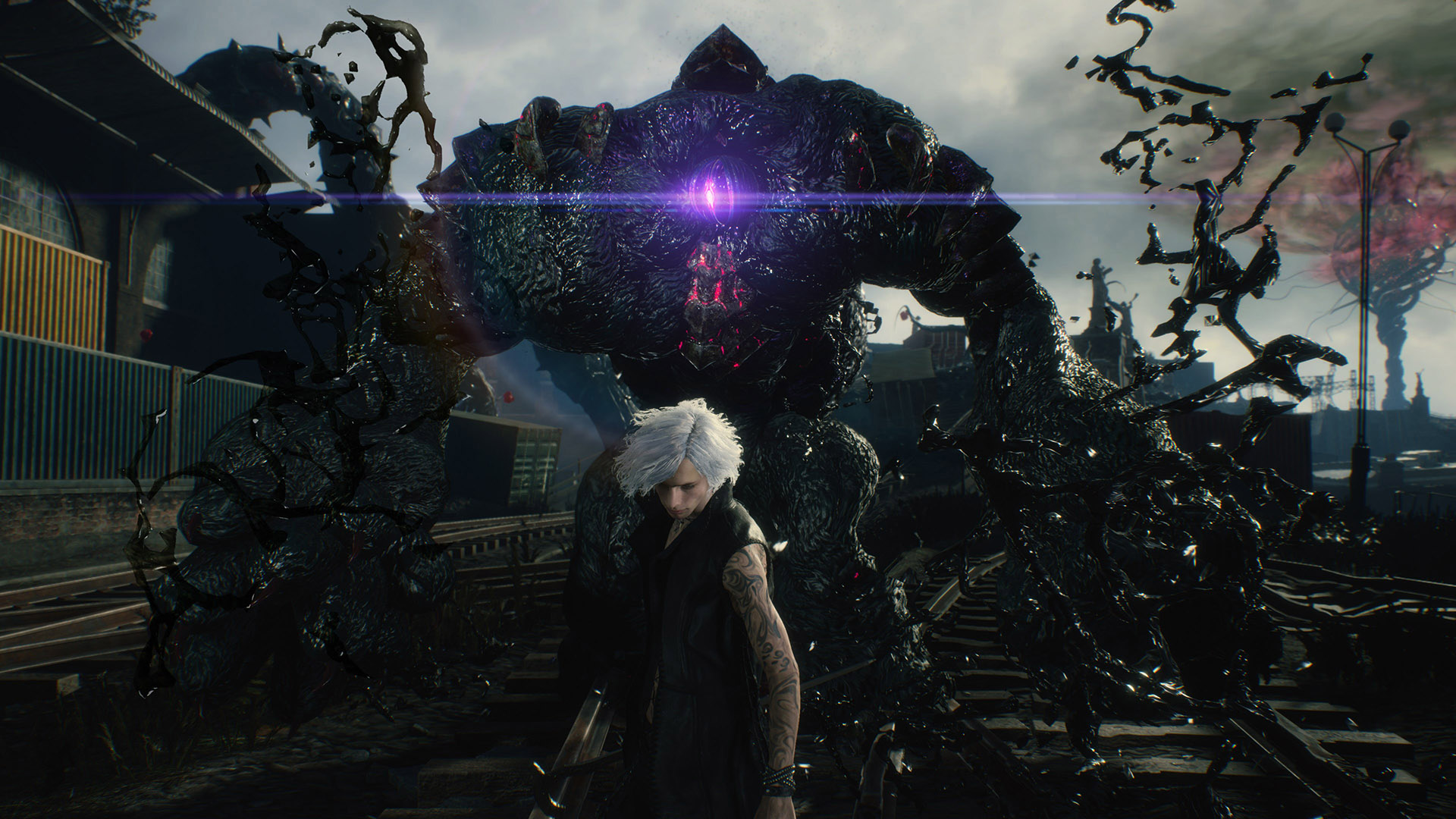 Just as there are three protagonists, each has their own missions throughout the campaign, sometimes interweaving among each other. Nero is close to how he played in Devil May Cry 4, having his trusty Blue Rose two-shot magnum and motorized Red Queen, but there’s one major difference: he no longer has his Devil Bringer at his disposal. In its place, newcomer Nico has built our lighthearted hero a slew of mechanical arms, each with their own functions. Some have the ability to knock enemies back, some can be used for traversing potentially inaccessible areas and others can slowly heal. There’s a good deal of variety when it comes to this, but unfortunately there’s a slight flaw to them. The problem is that you’re unable to swap between each arm without destroying them, and even then they’re locked in a set pattern, one after another. It makes less sense considering you pick up arms throughout each level, but alas, they still introduce an entertaining twist to combat, even though it’s not executed perfectly.

V is both the most fascinating in terms of gameplay, yet the most infuriating. The whole gimmick around this character is that his melee and long-ranged weaponry are tied to his demon panther and hawk, respectively. He summons them to do his bidding, but their actions are inconsistent as your commands are based on V’s movement. They can be difficult to control when it looks like V’s body is twitching all over the place, not to mention trying to avoid damage alongside your companions, and distance from an enemy is frequently unpredictable. That’s not the worst part, as height is V’s biggest downfall. Griffon sometimes is in a position where he’s unable to dive-bomb correctly, and Shadow can get stuck below platforms and not respawn when you want him to. Nightmare, the equivalent of a devil trigger, is the only decent and most devastating component to combat and is surprisingly fun to bring into battle, especially in an enclosed room. It will even unlock shortcuts and extra areas in a level depending where you summon it. Overall, V is not necessarily lousy to play as, particularly because it’s easy to rack up the style meter, but the quality of his gameplay design is left much to be desired.

Finally, Dante is easily the best and most versatile character to play as, so it’s a shame that it takes so long before you get to step in his shoes. He has the weapons, the technique and the charisma the others can’t hope to obtain. Being able to swap between the four different fighting styles ensures for a significantly more enjoyable experience, allowing you to customize how you want to play between agility, offense, defense and ranged. Then you add the easily accessible moves, through both numerous melee and projectiles weapons, making so that series veterans can do some insane combos while newcomers will feel a little bit of confidence in their ability. There are times when I wished the entire game was focused solely on him, because there had to be so much time and effort put into the other two that could have been focused on Dante, but alas we get a glorious 40% of the story with our lovable devil hunter. 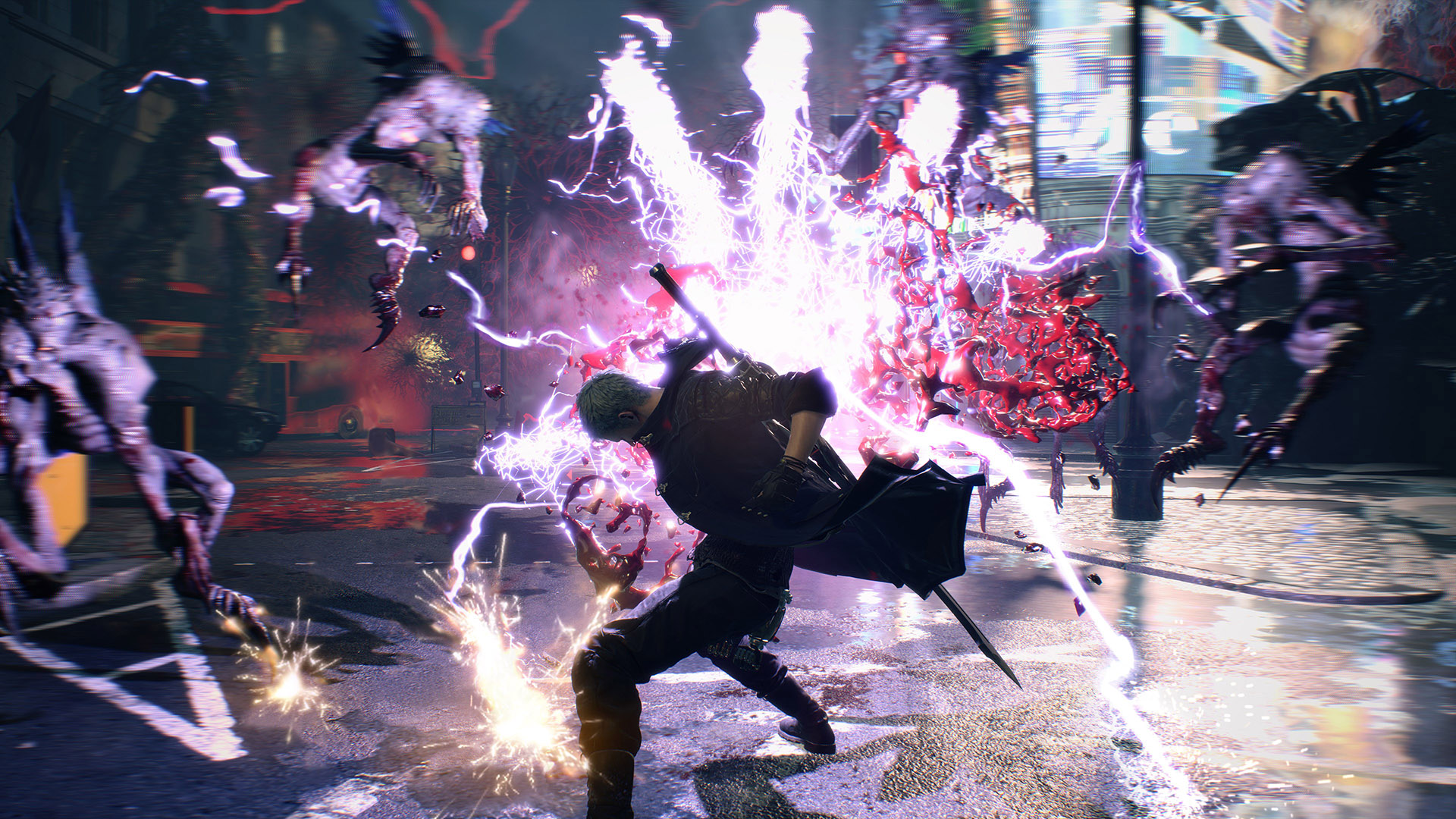 Other than that, Devil May Cry 5’s pacing is frantic and never lets up throughout the 10-hour campaign. While I have an issue with the environmental design from a visual perspective (which we’ll touch on in a bit), in terms of mission structure, it encourages exploration and replayability. This is one aspect Devil May Cry 5 nails as numerous stages have branch paths or mechanics you might not realize have been activated. For example, there might be a platform that’s slowly descending and the only way to raise it back up to get the health piece is kill or knock everyone else off. It’s experimenting with the environment that Capcom does particularly well this time around. The Japanese studio has also implemented a pseudo cooperative experience where other players around the world will appear in your game as the other characters. Sometimes it will be during the same mission, but most times it’s separate missions as the characters’ paths cross quite a few times. Unfortunately, this feels underdeveloped as I barely could see the players actually fighting; I just had to go by their style ranking beside their name that they were actually doing well. Finally, there was some worry regarding microtransactions affecting red orb drop rates (which is used as currency to buy moves and continues). While each character has one taunt that can be obtained for an obscene amount of orbs, everything else is easily obtainable. I only need to complete around ten to fifteen extra missions to obtain everything each character has to offer, and even then I was replaying missions as alternate characters or exploring the different routes.

For the first time in the series’ history we get to see what Devil May Cry looks like in Capcom’s RE Engine, and the results are positive, but they aren’t without issues. The characters have a great deal of detail, and most of the bosses as well, but outside of that, it’s desolate ruin after desolate ruin, along with a good portion of the story where you get to see a fleshy demon hive. If there’s one aspect past games in the franchise nailed (especially Devil May Cry 4), it’s the varied gothic environments. That is nowhere near the case in Devil May Cry 5. There are a couple of areas that stand out, but outside of that, the designs are stale and trite, and the further you get into the story, the worse they get. That’s not to say the game is graphically inferior, as while the artistic design takes a back seat, at least its presentation is rock solid, with sensational animation and special effects, not to mention a rocking soundtrack. With that said, at least playing on the standard Xbox One, you’ll run into numerous frame rate inconsistencies, especially during cutscenes. There were even a couple where it went well below 30 to look like a choppy mess. Not exactly a good start to a mission. 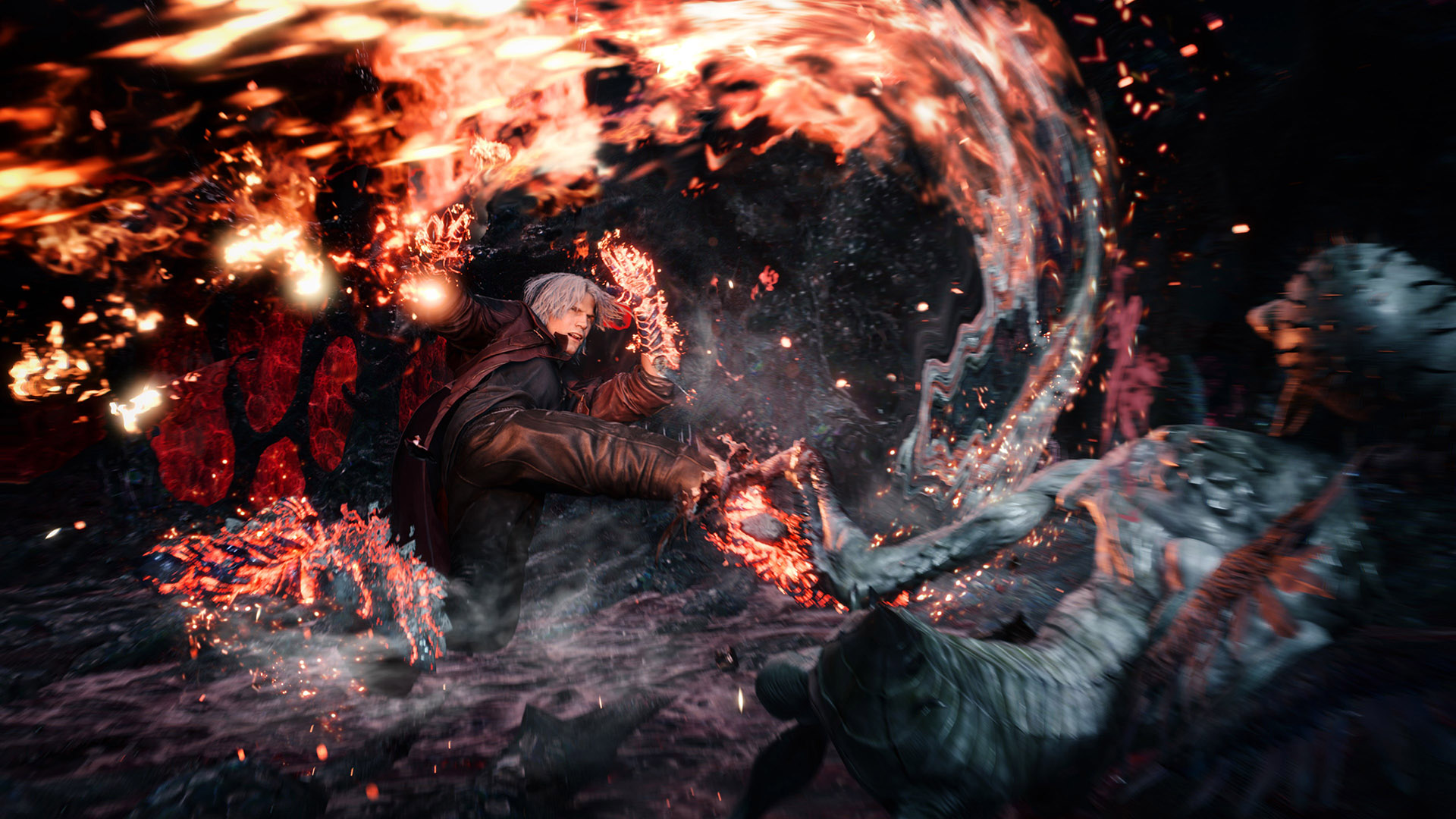 I may have been fairly critical throughout this review, but in the end Devil May Cry 5 is still one of the better character action games you’ll play. Dante is the highlight of the package as his charismatic and highly-diverse skillset lend to the game’s outlandish scenarios. Nero is the same as ever with a couple of new tricks up his sleeve, but unfortunately our newcomer is a bit of a disappointment. V is the most intriguing character from a gameplay perspective, but he falls flat as his demon summons are not at all reliable. While the story feels rushed, and a couple missions could have been compressed into a singular one, Capcom has crafted a well-designed and finely-tuned structure that encourages exploration and experimentation. I do wish that the coop-esque mechanics were better implemented and the visual design leaves a lot to be desired, but there’s just something about cutting through so many deadly demons in such a fashionable manner that has me coming back for more. It’s slick, it’s stylish, it’s sensational. It’s Devil May Cry 5.