Ah, the beauty of the unspoiled wilderness!  The stunning vistas of pristine nature stretching on forever under a clear blue sky invite dreams of endless exploration and adventure, discovering  sights unseen and wonders new.  The land of opportunity awaits any explorer brave enough to set their sights away from the convenience of a pre-made world, albeit with one small disclaimer.  FICSIT doesn’t send people into space for the joy of pure freedom in a new land, but rather expects something in return.  That pristine planet is a giant ball of untapped resources just begging to be exploited, with every leaf, rock and mysterious whatsit getting repurposed into whatever Project Assembly turns out to be.  It’s a lovely handcrafted planet with plenty to explore, but a good chunk of it is going to be covered by massive clanking machines all tuned to pay off your debt to the resource-hungry FICSIT corporation.

Which is, of course, far more rewarding than it really ought to be.  There’s something about a new world that makes it hard to resist putting it to work, and once you’ve got one assembly line churning out products it’s much easier to build another, and then a few more to keep them company.  The Satisfactory open alpha this weekend is a peek at the opening stages, taking the player from a scrub with only a few hand tools to get anything done to creating a fully-functioning home base with multiple automated assembly lines running to provide all the resources one could hope for.  And it all starts with little more than a chisel, scanner, wildlife-zapper and the skeletal structure created from the landing pod that will eventually be a fully-functioning home base. 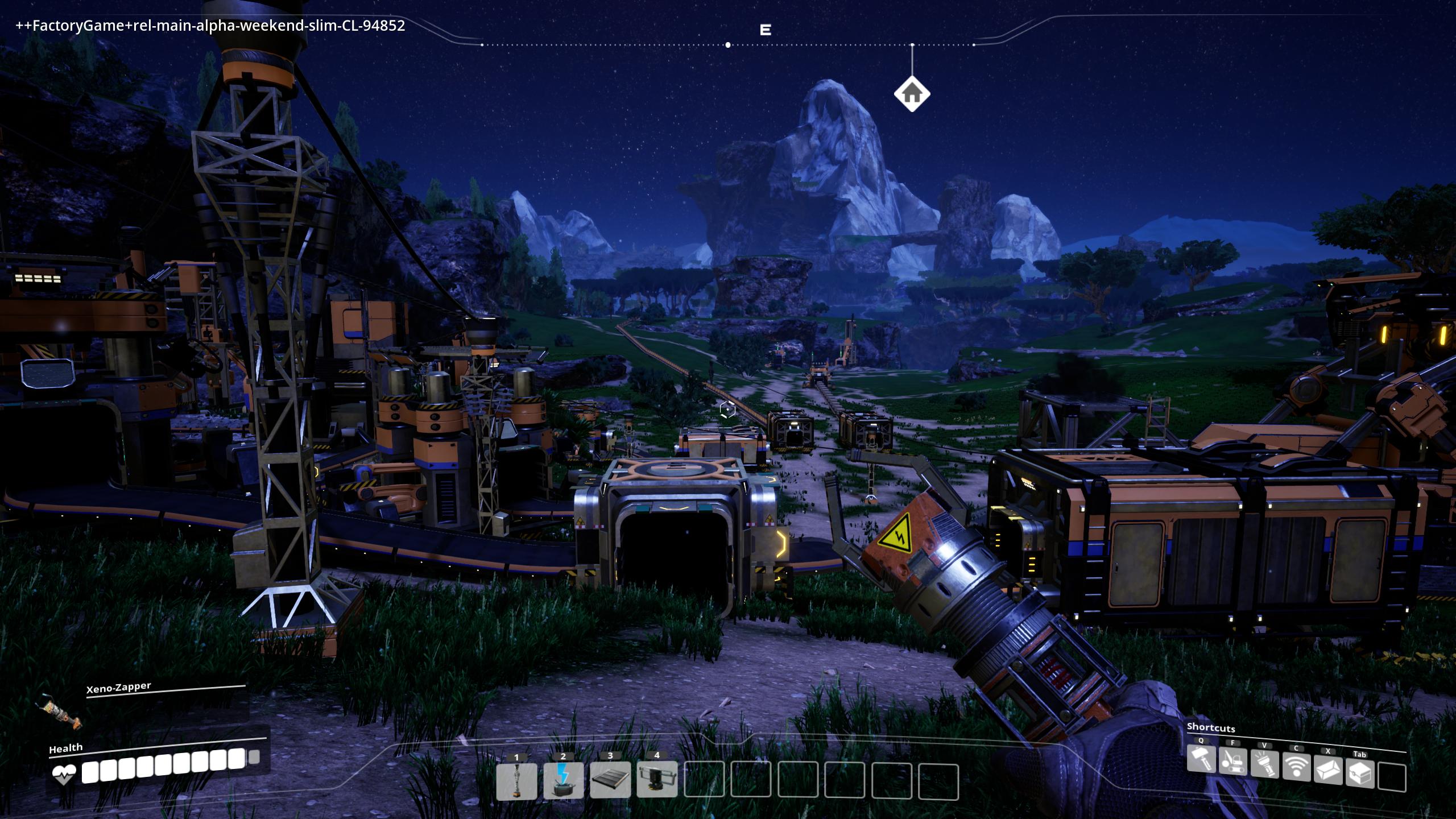 The alpha sets you down in a green field with stands of trees and scrub brush everywhere, perfect to quickly clear off and use as biomass for the power supply.  Once home base is established, preferably near mineral deposits for maximum efficiency, it’s time to create the production facility of your dreams.  The computer at home base gives milestones, reached by feeding it resources that have been refined into items like iron sheets or rods, copper wiring, cement, etc, and once it’s got enough you’re rewarded with new things to build.  The first few milestones involved turning the outline of home base into a fully-functioning production facility, complete with a shuttle to send resources into space, and after that it’s time to build the space elevator.  Project Assembly is hungry for materials and that little shuttle just isn’t going to cut it in the long term.

That’s all just a cheap excuse to build a complicated set of machines interacting to create as many widgets as possible.  Dump a mining unit on a mineral deposit, send a conveyor belt to the refiner to turn the raw ore into ingots, the ingots go to a materials processor to turn into rods or plates, etc.  The buildings take power, which is supplied by grabbing up wood and leaves and at first dumping directly into the biomass converter and then refining it into biomass blocks or fuel cells.  Like everything in Satisfactory, however, efficiency is key, and the power converters take 200 units of fuel.  200 leaves burn out much more quickly than 200 compressed biomass blocks, which in turn aren’t as efficient as refined biomass fuel.  They produce the same power but it’s nice not to have to tend multiple power sources spread out over the landscape. 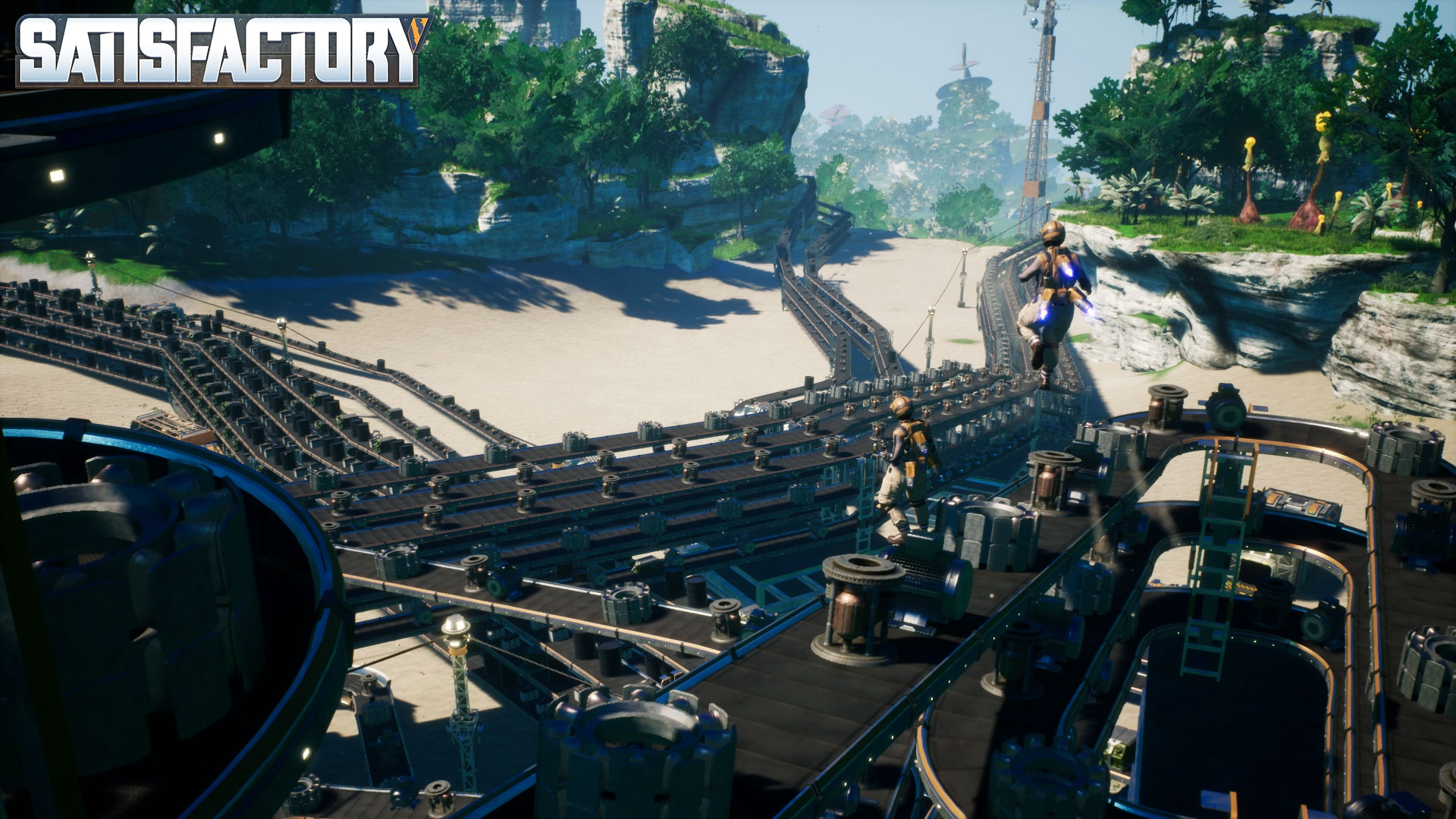 The same quest for efficiency holds true in making a production line.  The mining machine can produce X units per minute, and the refiner works at the same tempo, but it’s unlikely that the processor can pump out as many units per second as it receives resources for and that results in a backlog.  No resource is wasted, but it hurts the soul a bit to see machines backed up and unproductive, so installing a conveyor-splitter to evenly divide the ingots between two processors speeds up the line, and then a conveyor merger puts the output back together again before everything ends up in the storage unit.  Anything you build has a cost associated with it in terms of plates, cables, rods, etc, but once you’ve built a decent infrastructure you should have a ready supply.  Seeing the empty wilderness turn into a functioning set of production systems really shouldn’t feel so good, but when you’ve built a series of machines that do exactly what you want, it’s hard to deny the world feels like a better place for it.

The Satisfactory alpha is a small slice of what promises to be a much larger game.  There’s a lot of content I’ll admit to not seeing, such as a 5km x 5km handcrafted planet that I mostly kept to one area of, and completing the space elevator can wait for the pending Early Access (or whatever the Epic store equivalent is called) release on March 19.  It took me a bit to come to grips with all Satisfactory‘s systems, helped in no small part by watching a developer video explaining how the various pieces work together, but with a mental push in the right direction the game’s potential opened wide.  The planet is a beautiful untamed wilderness with stunning vistas, wildlife that ranges between hostile and indifferent, and pristine blue skies, but it’s also an incredible platform on which to build a giant machine that works.  Sorry, nature, but you lose out on this one.