As a developer, Image & Form Games has never been shy about getting weird with their robot-based SteamWorld series. Their initial title, SteamWorld Dig, was a simple and supremely fun sidescrolling mining game with a focus on improving equipment to reach the bottom and learn the answers to the mystery presented. Then SteamWorld Heist came along, turning the game world on its head with a fun turn-based strategy game. They followed this up with SteamWorld Dig 2, expanding on the original with exploration platformer elements along the lines of Metroid or one of the Igarashi Castlevania games (yes, there is a widely accepted term for this, but spell checker already hates me enough). The developer’s newest title, SteamWorld Quest: Hand of Gilgamech follows this trend of design documents created on what must be heroic amounts of coffee by creating an RPG title and mixing it with a card-based battler. Unsurprisingly, especially with the talents of this particular studio behind it, it works really well.

Players start off in command of Armilly, a knight that seems to have trouble taking anything except the legendary hero Gilgamech seriously, and Copernica, a mage with a particular affinity towards fire. While out on a particularly minor quest, they banter in good nature and fight off a seeming unending horde of coglins (if it isn’t obvious, Image & Form loves inflicting robot-based wordplay upon their audience with an almost malevolent glee). When the quest is complete, the pair return home to find their village in the process of burning down. It might have something to do with all of these vicious villains running about the place, though their motivations are unknown. They could be fans of s’mores and found a fire already in progress with which to roast their sticky treats, only to catch the blame for something they didn’t do. That theory seems unlikely, though. Here, the pair of heroes meet up with Galleo, a healer with a mean punch, and set to work in fighting off the baddies. 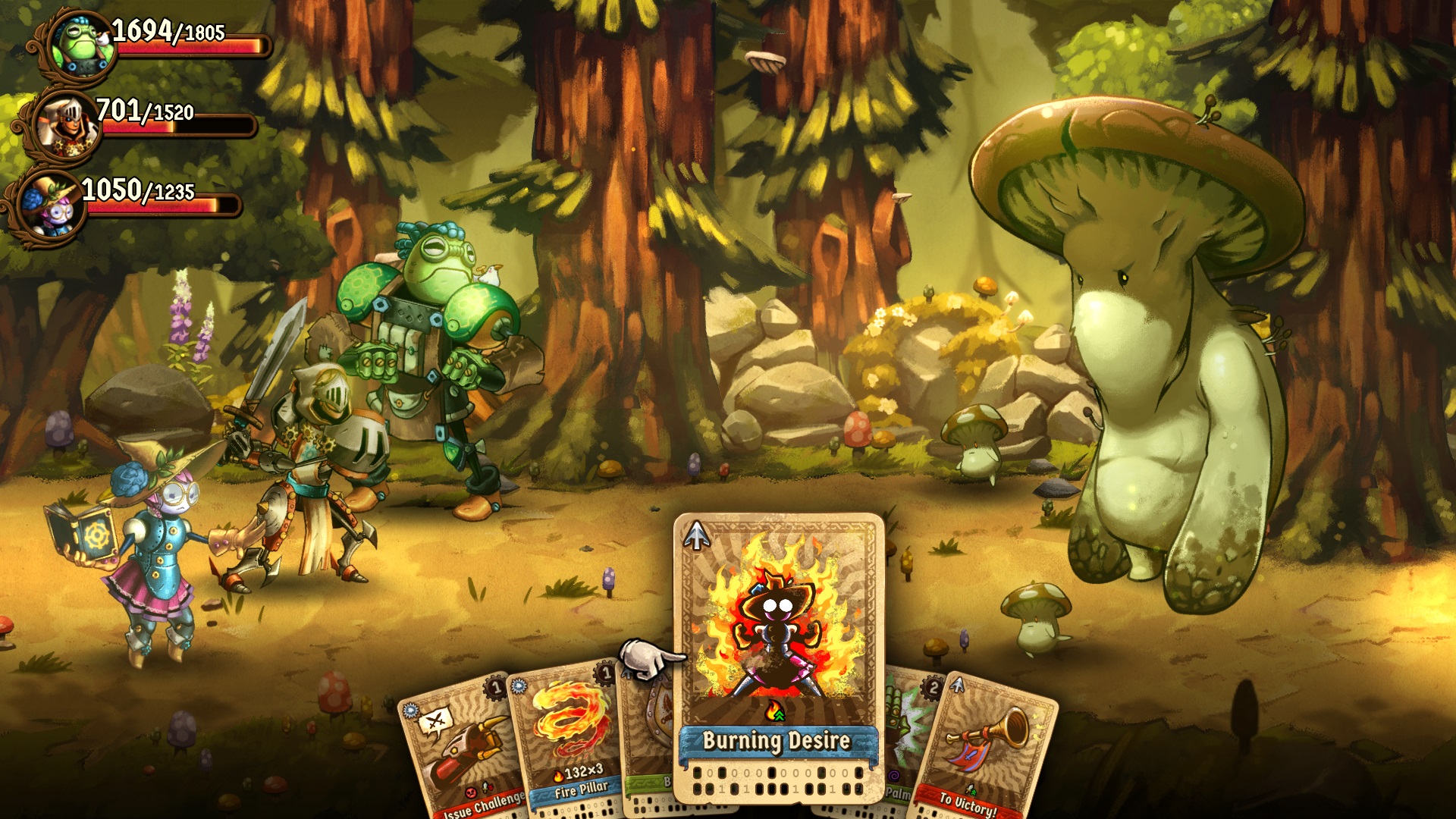 While the base set up for the game might appear trite on its face, the actual game is anything but. The banter between the characters and the lighthearted tone establishes the feel of the game extremely well. Because of this, even the trope of the burning village lands ably. It also helps that the gameplay stands on its own as something unique and fun.

The exploration is handled much like an RPG beat-em-up, such as Dungeon Punks or Dragon’s Crown, with larger spaces in rectangular blocks giving way to paths leading to the next chunk. Buried in these areas are secrets, hidden behind bales of hay or shadows cast by objects in the foreground, encouraging the player to check every nook and cranny they can for much-needed items and materials. Those materials are used to craft new cards or provide a desperately-required rescue in battle. 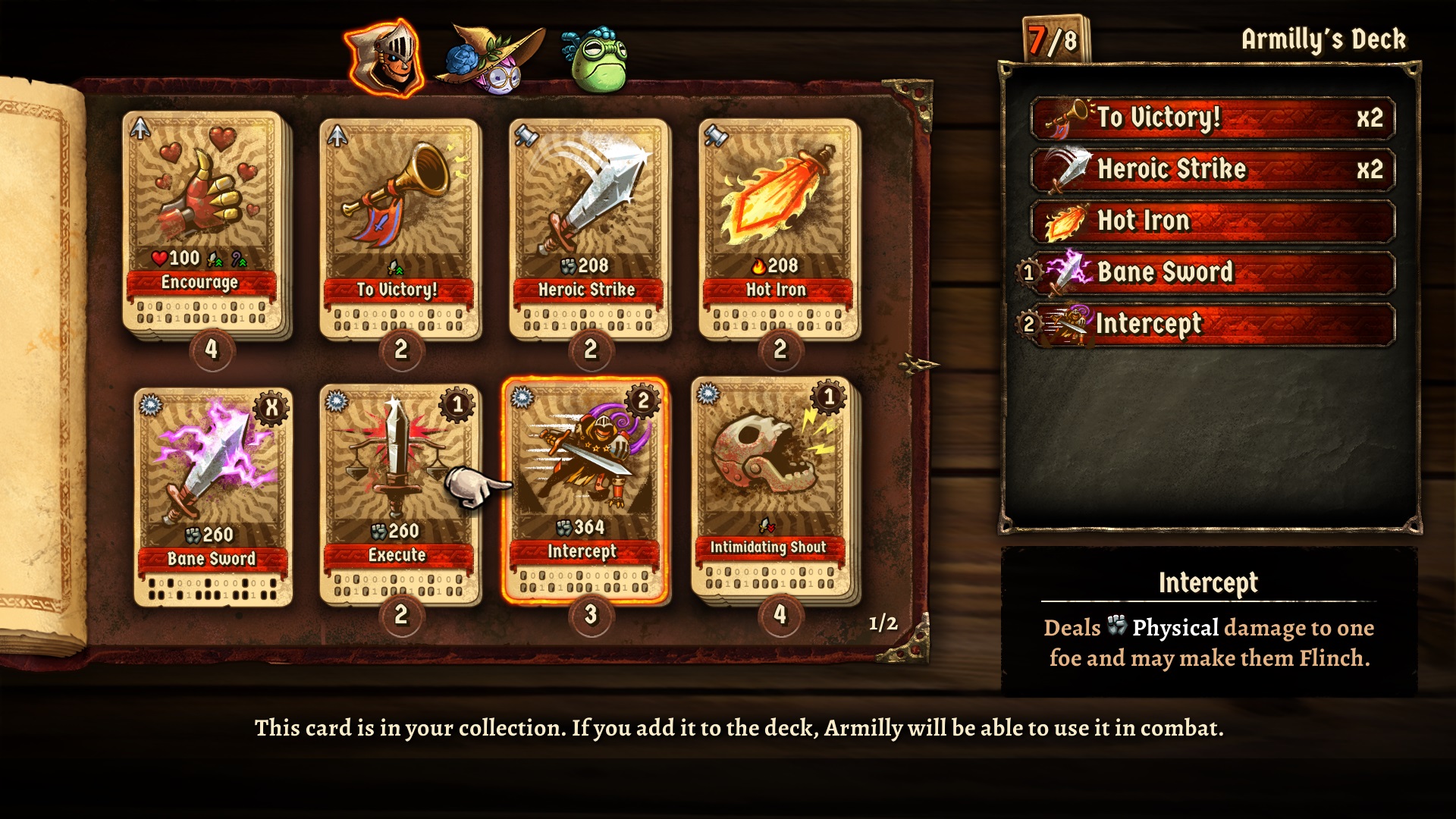 Combat is where things get really interesting. This is a turn-based affair, as one might expect. The player is dealt a hand of cards that represent actions the heroes can take, from buffs and healing, to direct attacks. Item cards, such as healing potions, are in their own separate menu. If the player needs to use an item, they won’t have to rely on the luck of the draw. Three cards can be played per turn. Using weaker cards generates steam pressure to power the stronger ones, forcing players to consider when to push for damage and when to hold back and focus on buffing, healing and generating pressure. The extra wrinkle is that when a player is able to use three cards for one of the heroes in one turn, the hero gets a bonus card tacked to the end of the string. For example, in one turn, the player might use one of Galleo’s healing cards, then have him punch twice. Afterwards, he’ll be able to cast a shield for the team for “free.”

This dynamic, when mixed with the elemental strengths and weaknesses that the enemies all seem to possess, pushes the player to think hard and learn to make do with the hand they are dealt. Even that hand, though, can be jiggered around, as the player can discard and redraw an unneeded card twice per turn. The randomness of the draw combined with the RPG trappings of grinding (if desired) and leveling up provides a heady concoction of great gameplay. 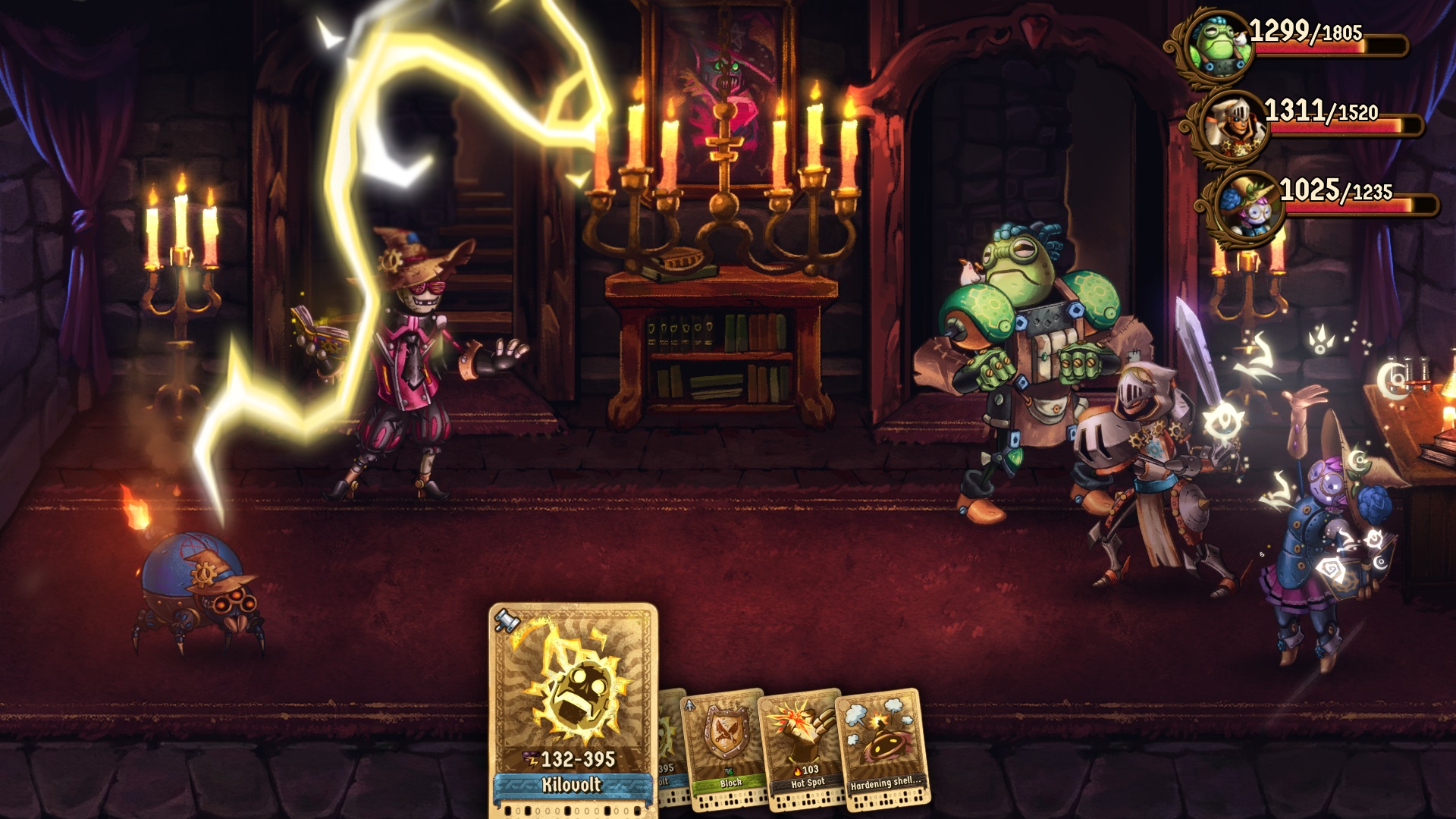 As someone that tends not to like card-based games such as Magic: The Gathering, it’s surprising how well this works for me. Everything already seems balanced to be a bit challenging for the careless, but fair. The expertly-interlocked systems allows the player to goose things in the right direction, even when the battle might seem lost. SteamWorld Quest: Hand of Gilgamech is already shaping up to be the next great SteamWorld game. To be fair, this was expected. What wasn’t expected was how it mixes two genres so incredibly well to create something that could influence the state of RPGs and card games for years to come. While the only platform announced right now is the Switch, others seem likely. No matter what, keep an eye on this one. It will not only be fun, but it might also be a turning point for games.