Since the announcement of Funko and Pokémon teaming up for a line of Pikachu figures, there has already been one released. The series is going to be filled with some adorable collectibles for Pokémon fans and we received a bit of luck last month with the “One Lucky Day” Pikachu. This time, we brave the wet season with the “Rainy Day” Pikachu.

The figure depicts Pikachu sitting on the ground dressed in a bright orange raincoat and hood. It’s holding a Sunny Castform doll in hopes of better weather and there’s a puddle of water sculpted around the base. Lots of bright, complimentary colors make it stand out as part of your collection. Compared to the last figure, this one is lacking in one place and that’s with decoration. The droplet ripples and tufts of grass are well done, but it could use an extra little easter egg. One Lucky Day had a hidden Amulet Coin at the back of the figure, but Rainy Day doesn’t have a fun feature. It’s not a big deal as it’s not the main attraction, but seeing it in the first and not present in the next didn’t match up. Something small like a Damp Rock would be perfect for hardcore fans to spot and matches up with the theme. 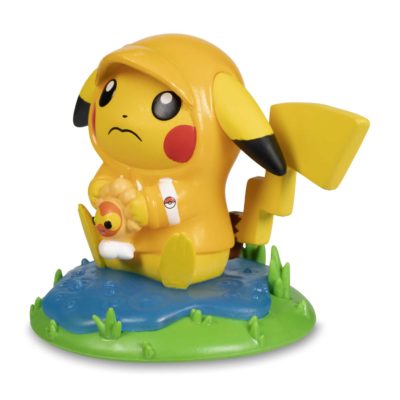 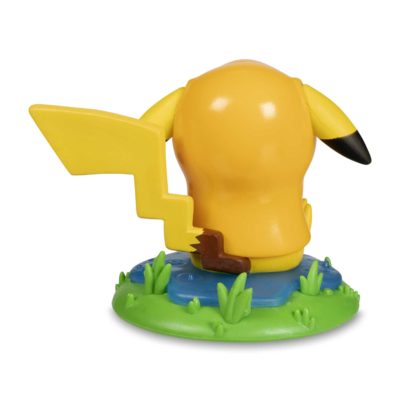 Usually when you come across a Pikachu figure it shows off a cheerful expression or is ready for battle. This time, however, Pikachu is sad and miserable. It’s done purposely to reflect the dreary weather elements so Pikachu is just a bit glum. It’s still cute, but different from what we are used to. This isn’t such a bad thing, though, as it will give some variety to Pokémon and Pikachu collections. You just might feel sad whenever you see it. It is kind of odd since Electric-types would enjoy rain, but I guess it’s too much for this cutie.

Hopefully you can keep Pikachu out of the rain by keeping it on a desk or shelf. Come up with a clever way of displaying it though thanks to its Rainy Day title. It can alert coworkers of overcast conditions that could occur or teach a classroom of young students about different weather conditions! Though, if you live somewhere that is always expecting some precipitation, you might as well keep it out all the time. 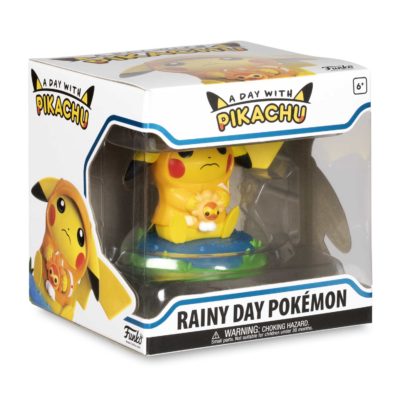 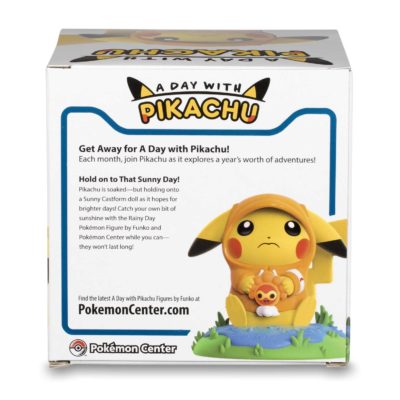 Grabbing this Rainy Day Pikachu is a must for huge Pikachu collectors as it’s different from the usual Pikachu items out there. Plus, if you are trying to collect all the A Day with Pikachu figures, then you’re going to need it. Grey skies are going to clear up as soon as you have this adorably-soaked Pokémon.