While considered by many to be among the lower forms of philosophical material, video games are often the most accurate representations of the human condition and our own self destructive nature. People will strive to create paradise, which will only last until its inevitable collapse before we revert back into our war mongering ways. The titular Valfaris was such a place, a utopian society that maintained paradise through its heavy military capabilities. This is of course until things go horribly wrong and Valfaris vanishes, snuffing the paradise out of existence. This is ample reason for protagonist Therion to go on a rampage through space, laying waste to countless horrific alien lifeforms in his quest to return to Valfaris.

Valfaris is made by the same studio behind Slain: Back From Hell which is apparent from the similar art style and heavy metal soundtrack, also composed by former Celtic Frost bassist and guitarist Curt Victor Bryant. Stylistic similarities aside, the world of the two games is vastly different, taking place in a nightmarish science fiction world opposed to Slain’s medieval fantasy hellscape. 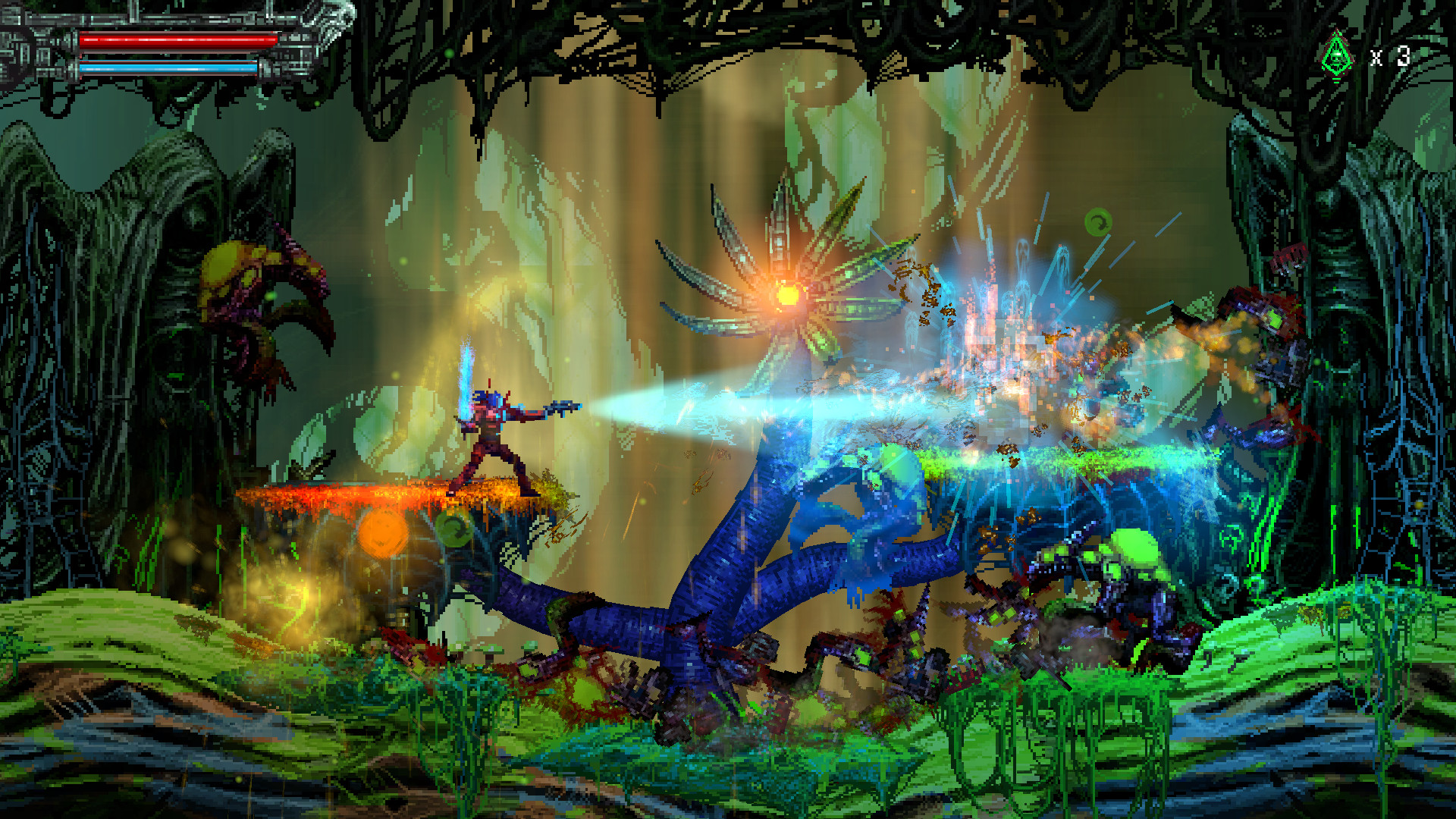 Therion must battle across various pixel art landscapes, battling maybe bizarre and horrific alien lifeforms. The level designs are composed of a vibrant color palette arranged in a way that still conveys the desolation of the alien world. The retro-style graphics lend themselves well to the character and environmental designs that hearken back to animated fantasy from the ’80s such as Heavy Metal and contain a similar feel to classic games such Shadow of the Beast. From the time spend with the early build of Valfaris it feels like it could be the perfect mix of modern game mechanics implemented in an homage to classic games of the ’80s and early 90s.

Therion is armed with a gun and sword to defend himself against the hostile creatures that inhabitant the world of Valfaris. The gun can be fired in eight directions, which is not only a useful feature for combat but also is essential for bypassing certain areas. For example, some areas can only be accessible by hitting a target at a specific angle. The difficultly of Valfaris is designed for the old school player, where a combination of quick combat reflexes and platforming skills are required to make any progress. Check points do make slogging to the end of the level a bit easier and the difficulty does not seem quite as unforgiving as Slain, but there isn’t any real handholding in Valfaris. Bosses and minibosses are dealt with the same way they were in many classic titles, which is a combination of tenacity and learning their attack patterns and overcoming them. During the demo, the challenge in Valfaris is apparent but it never feels impossible or unnecessarily cheap, though that statement may not apply to later stages in the game. 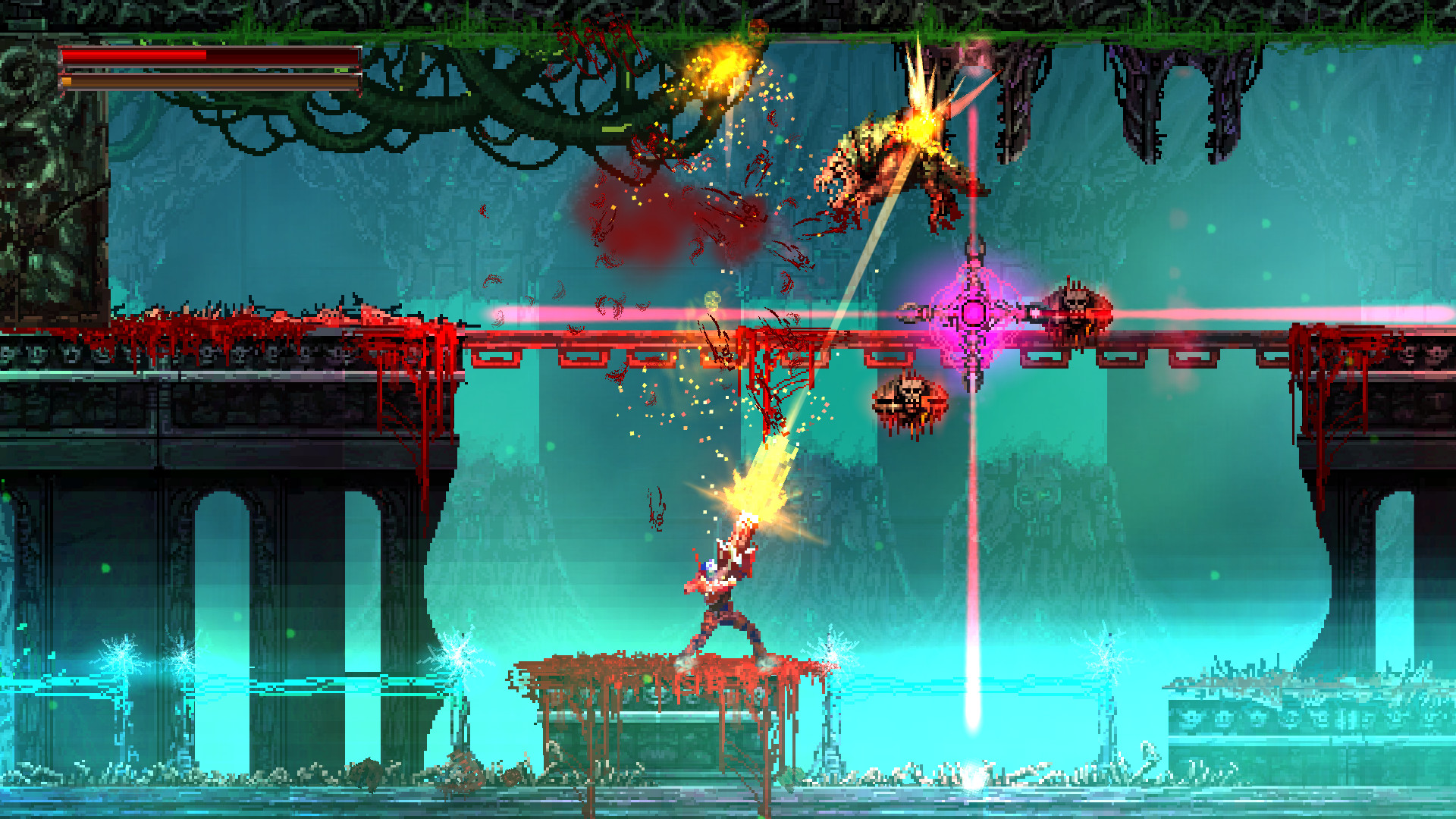 Valfaris is slated for release sometime in 2019. Currently there is a demo available in its Steam page which is a great way for interested players to check it out. Throwback titles have become a bit of trend in recent years and have been of varying quality and Valfaris seems like it’s one of the titles that does an homage to 8-bit and 16-bit titles properly. Slain had an overall classic Castlevania flavor to it and Valfaris transports that same vibe into outer space and adds some Contra seasoning on top of it. Any of fan of classic 2D run and gun platforming needs to put this title on their watch list.