There’s far more to urban planning than simply laying down buildings based on expected usage patterns.  The needs of the people living and working in the city are important, of course, but no development can succeed unless it takes into account how the buildings feel about it.  The people using the facilities have the illusion of control but their success or failure revolves around the attitudes of the structures they inhabit.  It’s probably best to leave the citizenry’s beliefs undisturbed, but in Buildings Have Feelings Too you’ll need to work towards the real catalyst for urban success, and that’s creating a town of happy buildings.

Buildings Have Feelings Too is a town-builder played from a non-traditional side-view perspective.  You arrange buildings on a street, creating empty structures and pointing them towards the desired spot, at which point they amble on over and plunk themselves down.  If there isn’t quite enough space that’s fine, because the other buildings will shuffle aside to make room. These are living buildings, and while they look mostly realistic when at rest, they sprout cartoon arms and legs when it’s time to get moving.  It’s weirdly adorable, like one of those kids’ storybooks that’s as much about artistic playfulness as it is precision rendering. 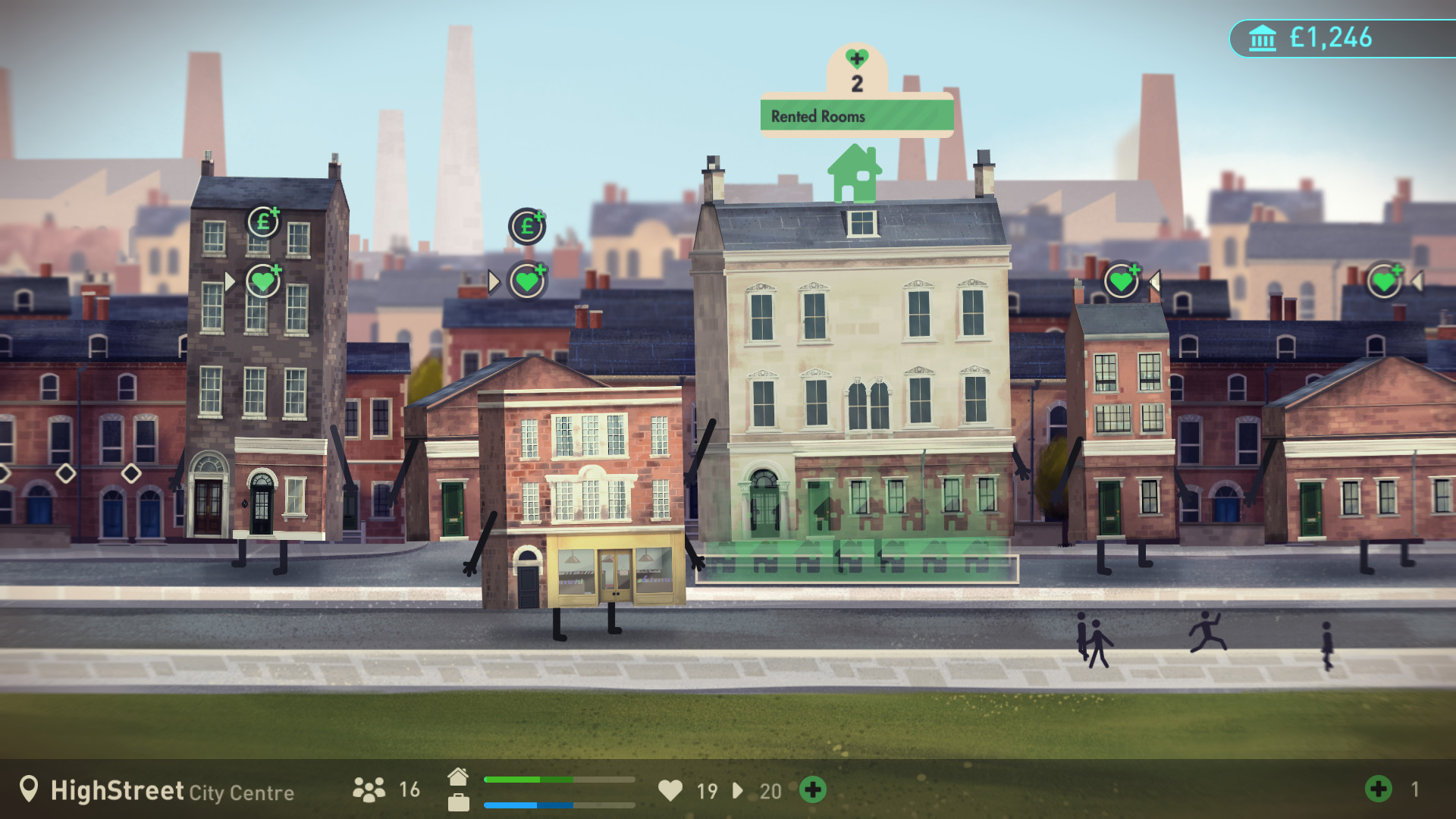 The empty street is filled with potential and it’s up to you to construct a balanced, happy city to take advantage of all that space.  During my time playing at PAX East I had a helpful developer giving advice over my shoulder, pointing me in the right direction to see as much of the demo as possible in the short period of time I had to play.  The first task was to buy an empty warehouse, which is a building with the potential for any number of jobs.  The game starts in the early 1900s so my options were for businesses like a linen mill or whiskey distillery, but as time passes more era-appropriate industries will become available as well.  I chose a linen factory and plonked the building down in a random spot, generating a little bit of happiness in the town.

A little happiness is nice, but a lot is better, so the next building needed to complement my new factory.  Factories need workers so building number two was a residence and its assigned task became rented rooms.  That got workers for the industry, but people also like entertainment, so a new building got a job as a pub, and then another as a bakery, plus as long as the town is growing yet another building became rented rooms.  All those businesses need more than just the one house residence’s people to keep them happy, after all.  The more satisfied a building is with its place in the world, the more useful it can become, with up to three stories’ worth of development possibilities.  The ground floor is available right when you buy the building, but floors two and three open up when you successfully build the town around it.  Happy buildings mean more development opportunities and a better income from the one property, and that attracts human specialists. 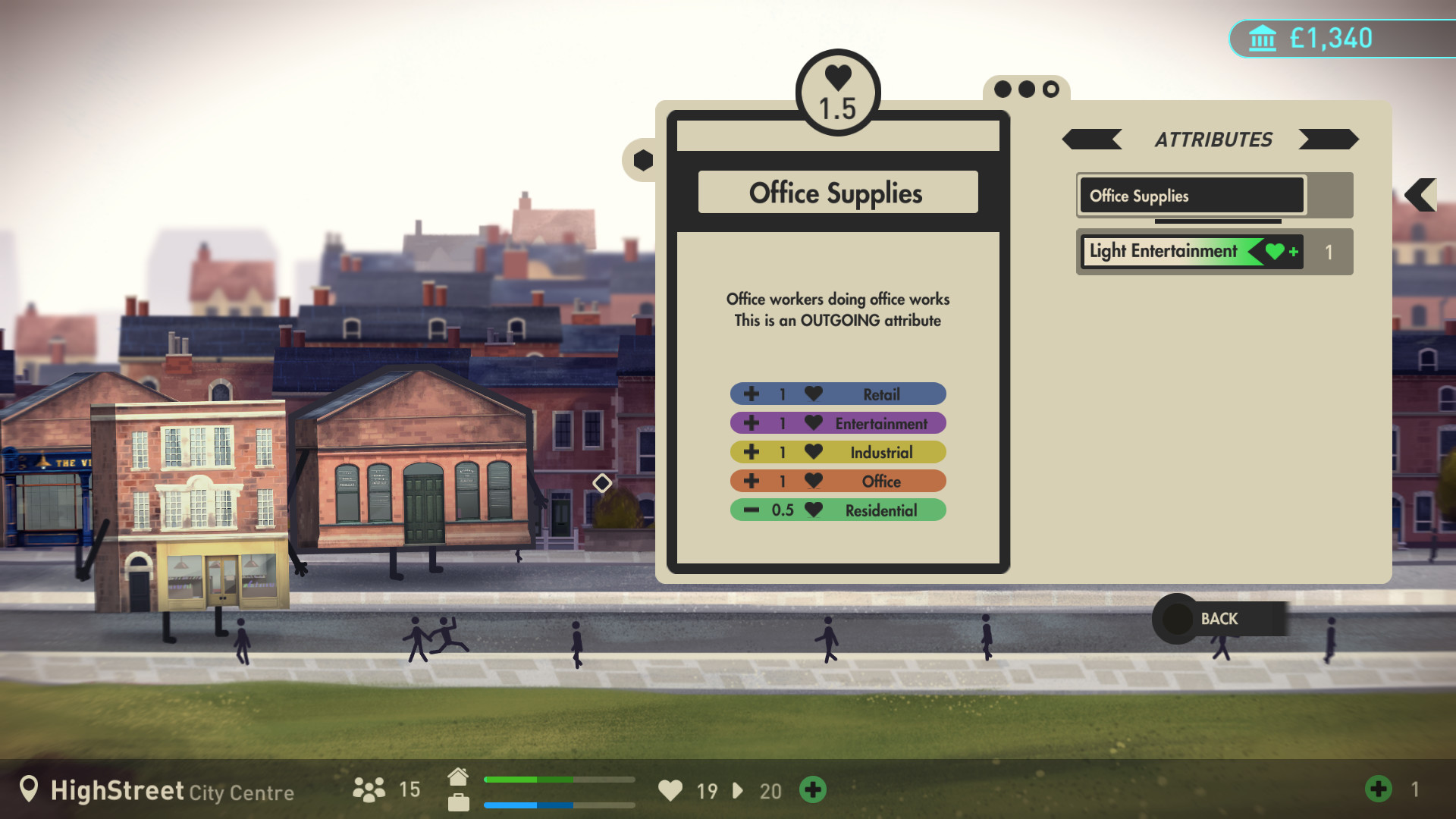 Certain businesses require trained people to run, so while a factory works nicely with the general populace something like a bakery requires an actual baker to operate.  These people show up as the town grows, but they’re a limited resource so need to be placed in a good spot.  By the time I was done my demo I had a street about eight buildings long divided up between industry, residential, and entertainment, and a couple of them even had multiple stories of businesses.  It took a little shuffling about to make everyone happy, but it’s much easier to move a building around when it’s got legs and a positive attitude.

Like many demos this is all an early-game experience, but there’s quite a bit more to come.  As the in-game years roll by there will be difficult choices to make, repurposing buildings into new industries as the future sucks the life from the past.  Rented rooms get upgraded to apartments, the linen mill becomes a relic of the past, and a good bank may be forever but whiskey distilleries aren’t really a staple of downtown industry any more.  Change is inevitable but if managed properly then it will lead to a healthier city and happier buildings, assuming the malls don’t suck all the life out of downtown.  Even having a fair idea of what the future holds doesn’t make urban planning easy, but with a good balance of businesses, entertainment and people all arranged to maximize their happiness, you should be able to construct a cheerfully growing city filled with contented buildings.