Keyboards in video games are often extremely limited in the range of topics for discussion. Outside the debate on what mechanical varieties or brand types are preferable or whether or not you prefer such a peripheral over a gamepad. Specifically, as a means to control how players interact with the events on-screen; few games in total attempt to revolve their mechanics and overall objectives around the very functioning of keyboards themselves. Beyond the standard affair that is the WASD configuration and the accompanying arrow keys. There are some, those whose variation on gameplay relies on one’s memorization of the keys sitting beneath them in close proximity. In terms of navigation and character control, it may well be an odd (if still interesting) concept to wrap one’s head around. But what about typing itself — spelling words out, as quickly as possible, as efficiently as possible.

What if, instead of simple button prompts or a quick chain of prompts, such things like attacks and magic use revolved around the proficiency of spelling/typing out words displayed on screen? It might sound and look like an unnecessarily convoluted gimmick to revolve an entire Action RPG around, but that’s exactly what Nanotale: Typing Chronicles is. While not the debutant iteration in its respective series — instead a follow-up entry — you’d be forgiven for making all kinds of less-than-pleasant judgements. One may very well be the assumption that combat (if you could still call it such) will turn out sluggish, a needless chore just to get anything done. After all, words spanning eight even nine letters on occasion can litter the screen. And that’s just to knock a single slice off one lone hostile’s health bar. The process may indeed look prolonged and pointlessly so, but the reality — the realization of just how effectively and enjoyably so the simple act of typing flows into proceedings — is far from. 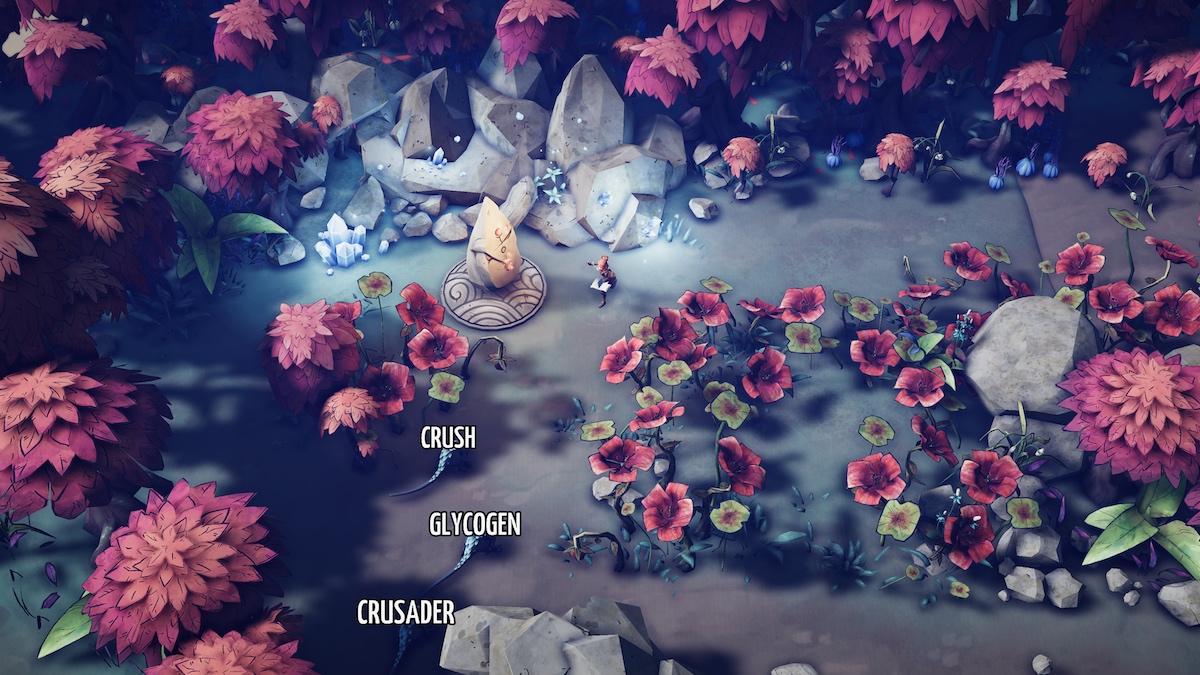 Like a lot of MMOs or tactics-orientated role-playing, Nanotale is all about surveying the surrounding space from one’s overhead view. Deducing how particular interactive objects and environmental tricks may be played across a series of biomes that, while semi-open in their many branching paths, all eventually meld back into one intended route forward. Specifically, Nanotale places great emphasis on positioning — even going as far as to deny you an opportunity to attack should a large husk of a creature slip out of your line of sight or even try to play the same stealth game amidst shoulder-high grass. It’s up to you to decide how close/far is enough before the pitter-patter of keys commences and you’re spelling out random words varying from five to nine letters long, chipping away at enemy health bars as they begin their prowling move towards you.

It should be noted that as this was a demo build, the developers incorporated an infinite health perk, meaning that deducing how challenging combat affairs were in regards to damage taken remains completely up in the air. Even so, such is the surprise to find Nanotale‘s combat one of cat-and-mouse — of skirting about a more spacious surrounding of trees and raised ground — this necessity for space between you and the enemy, combined with the rampant mashing of keyboard eyes, results in a fascinatingly unique take on reflex-based combat. And while the words displayed on-screen do feel a little basic in their design — simple white font that just pops into view, lacking any of the magical aesthetic or low-poly, varied color palettes alike of the overall game — it takes little away from how tricky these encounters can become. 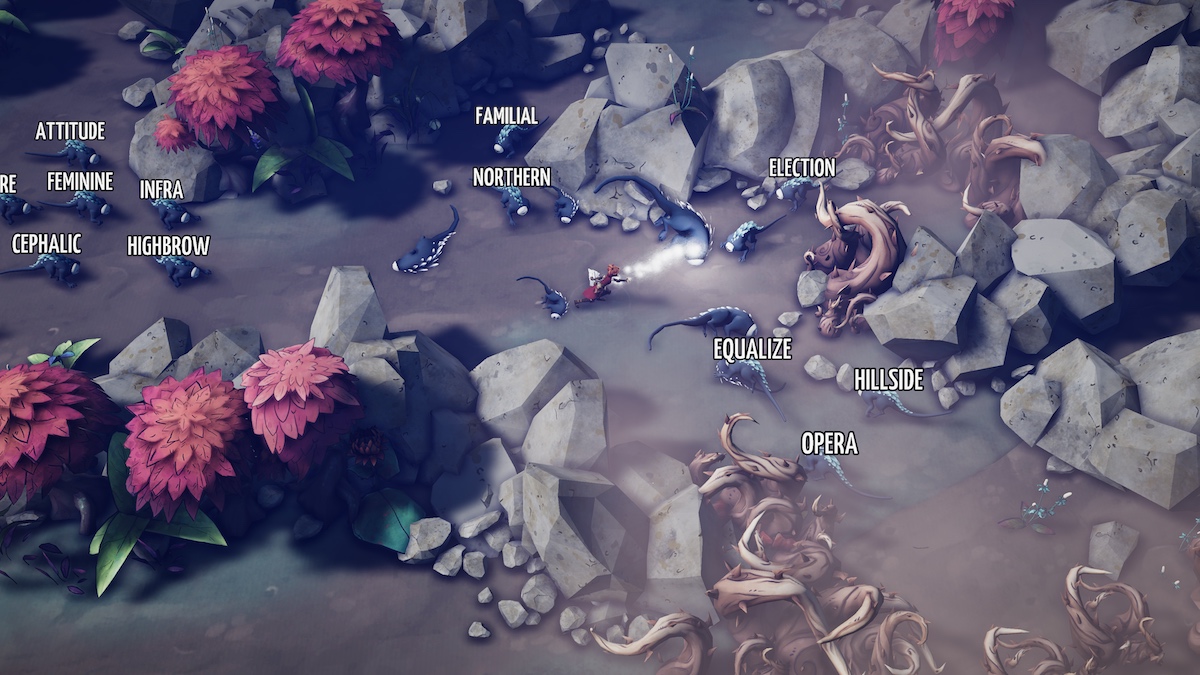 Especially when it’s a large crowd or huddle of foes and a couple of bulkier equivalents to keep constant track of. All the while, hammering away at the keys — deciding when it is that enough (for that given sequence) is enough. The interaction with certain environmental objects comes into play here again; a key component to Nanotale‘s take on magic-altering elements in the surrounding world is that inputting particular context-sensitive terms, ICE for example, followed by a now-visible word hovering over a gem, will allow you to freeze a pool of water. Forming a bridge or maybe even preventing foes from lunging forth. Similarly, tricking foes into nearby grass, to then apply an opposing FIRE spell, could net you a helpful area-of-effect as fire burns it away, and with it, the surrounding enemies.

Nanotale‘s variety isn’t that expansive and yet it needn’t be given its rather compelling primary mechanic of inputting words to score hits. A frequent affair in stopping, typing, retreating to safe distance, typing some more, repeat until victory. All the while making sure to keep a stern observation of any enemies that may try and catch you from the side. The process is straight-forward enough and the moment-to-moment gameplay simple to grasp, but that doesn’t mean that the hurried need to spell out as many words in as little time as possible ever fades. It doesn’t and Nanotale lands itself a concept that hardly loses its allure. 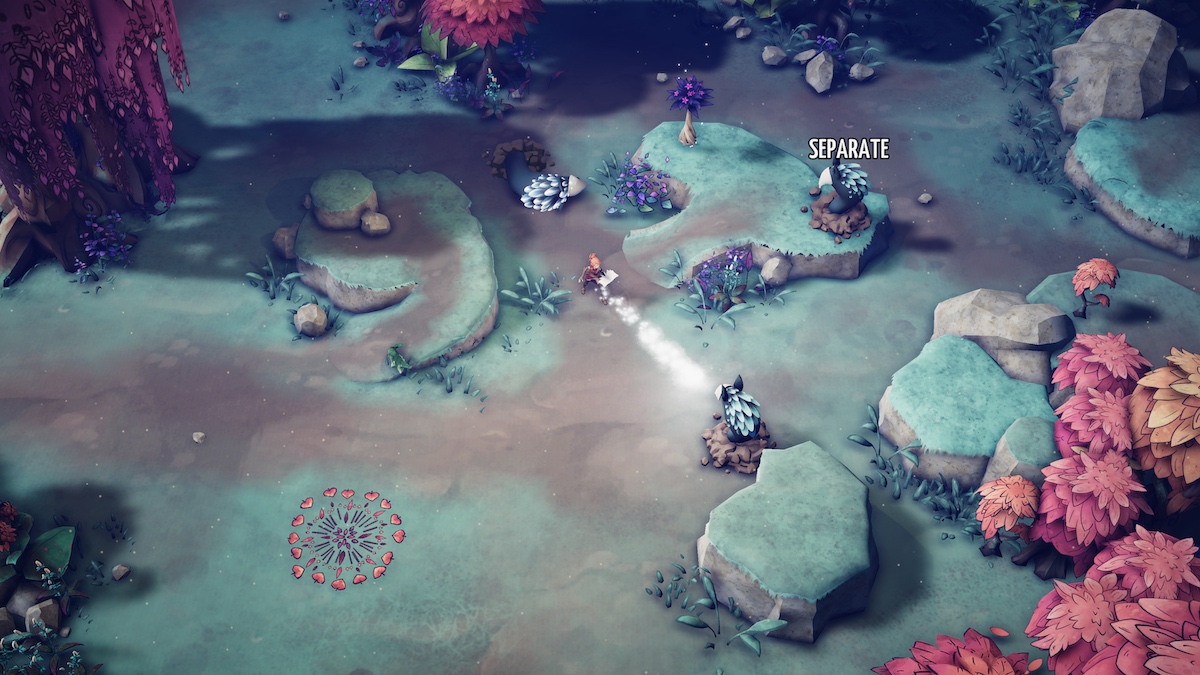 There are even some neat little moments of additional challenge players can test their mettle at; certain static enemies in the demo build steadily regenerating their health over time. Meaning you have to be fast as possible in typing out each word that pops up over the creature’s head. How far developer Fishing Cactus will go in pushing this addictive template to other possibilities — even if they are optional objectives or side-quests that require a little more pace — Nanotale: Typing Chronicles is easily one of the year’s more intriguing concepts when it comes to the link between the player put before the screen and the action that unravels on it. There aren’t that many games out at the moment that utilize a conventional keyboard in this manner, but Nanotale has proven there’s potential and indeed room still for such a peculiar spin on Action RPGs.