In 2014, Yacht Club Games first released the now-legendary platformer Shovel Knight. It was a truly terrific bit of action that felt fully authentic when it came to its retro aesthetics and gameplay, from detailed pixel art to simple yet challenging gameplay. It didn’t take long for people like me to declare it to be the best game that 1991 never gave us. And now, Yacht Club is stepping into the role of publisher to help bring us Cyber Shadow, a new retro action platformer from developer MekaSkull, to a wider audience. And appropriately enough, it may very well be the second-best game that 1991 never gave us.

While it would be easy to cite Ninja Gaiden as Cyber Shadow’s primary influence, the visual style and gameplay reminded me more of latter-era Natsume titles instead. And indeed, Shadow of the Ninja ended up being one of the game’s influences, along with the likes of Batman and similar games. It actually might be a bit hard to explain the types of action platformers that I was reminded of while playing it, since most of them like Shatterhand and Kabuki: Quantum Fighter are cult classics at best, but Cyber Shadow captures the spirit of these underrated gems perfectly. 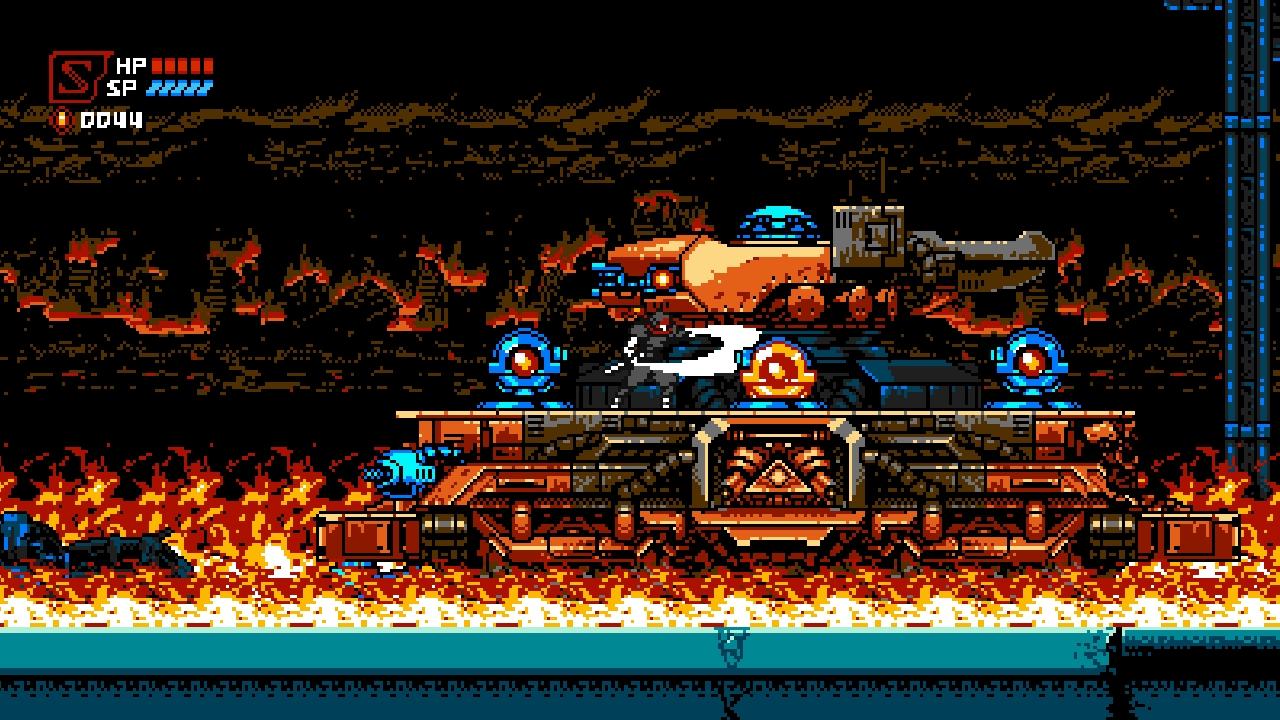 Diving right into things as a ninja on a journey in a world overtaken by machines, we start off simple. Mainly just jump and slash, take out the lanterns(?) and various boxes scattered about for life and power-ups, deal with a variety of enemies. The level also had a stationary piece of machinery as a boss, which had a decent pattern to get down. Having defeated them, our hero learned a new dash skill. In a slight Mega Man-esque twist, defeating a boss earns you a new skill. All in all, some standard yet fun stuff.

Of course, then I learned that aside from Level 1-1, the preview also had one of the later stages from around Level 3 or 4 to check out as well. And as you may have guessed, this is where the difficulty of the NES era began to emerge in Cyber Shadow.

Well, it wasn’t as difficult as expected, though. In fact, things were settling nicely into the “tough but fair” category. Naturally, enemies got trickier to deal with. More and more of them were using projectiles, and I had to battle some of them right next to environmental hazards and bottomless pits (which did lead to one cheap death, which hopefully won’t be common). Also, our hero had a new skill to master, one that flung a small wave of fireballs upward. And coincidentally, now there were aerial enemies to deal with, so I had to manage my energy and make sure to use this move only when needed. The boss of this level also upped their game a bit, with multiple phases and trickier patterns and attacks to dodge. They also tended to stay in the air via jetpack while firing lasers at you, so suddenly that rising attack was more vital than ever in order to deal significant damage. 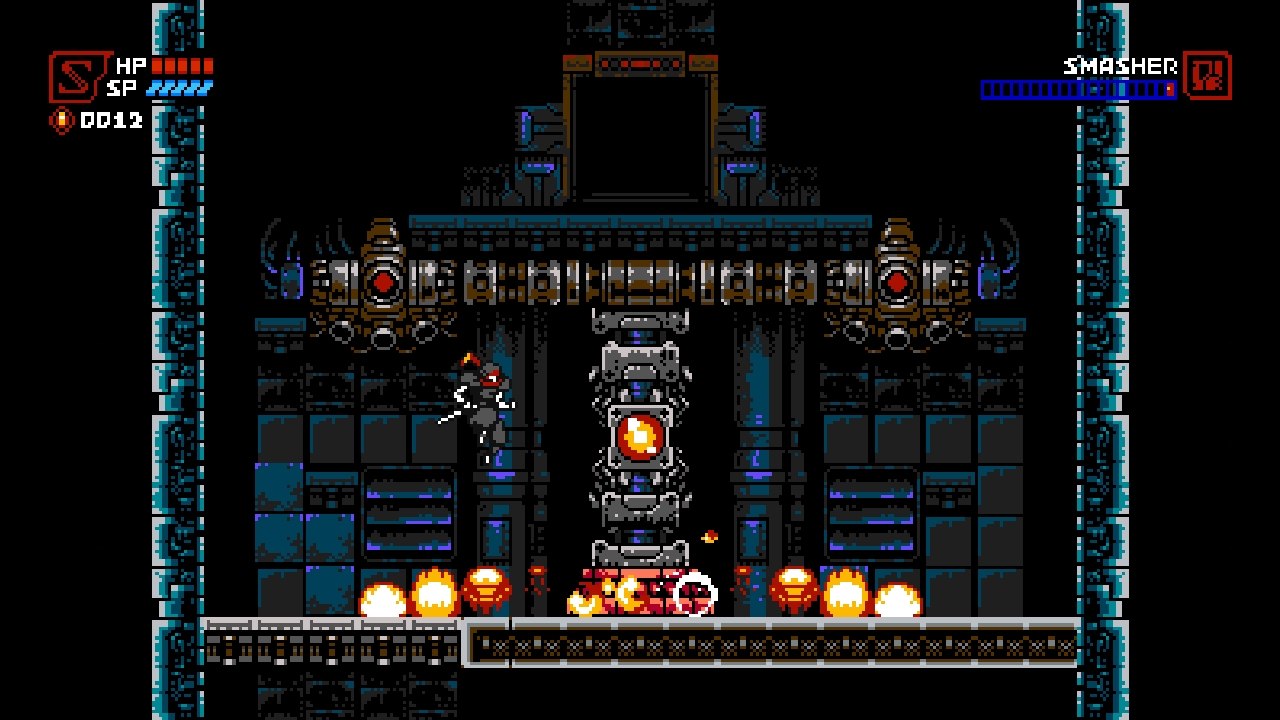 But again, things were still fair. Enemies still dropped their fair share of power-ups, and most important, currency. Yes, even in a world ravaged by synthetic lifeforms, you still needed to pay for the occasional shot of health or energy booth. You do these at special stations throughout the levels, which are spaced apart perfectly. In fact, the level design in general just seems incredible, looking dazzling with retro 8-bit styles and modern touches and delivering a perfect level of challenge and a good chunk of variety when it comes to gameplay.

The most interesting part of Cyber Shadow, though, happened at the very end of the later level. Throughout the level, I noticed a few areas on the ground with different textures, seemingly indicating that they can be broken to have new areas uncovered. But there were no attacks in my arsenal that could get through. It wasn’t until after the boss was defeated that our hero learned the necessary move. So why tease optional areas earlier? What secrets are being hidden here? Well, apparently these sections will contain content such as new upgrades, items and even extra bits of story that may supply new details. In other words, there’s the potential for a lot of replay value here and hints that there may be a deeper story than what first appears. 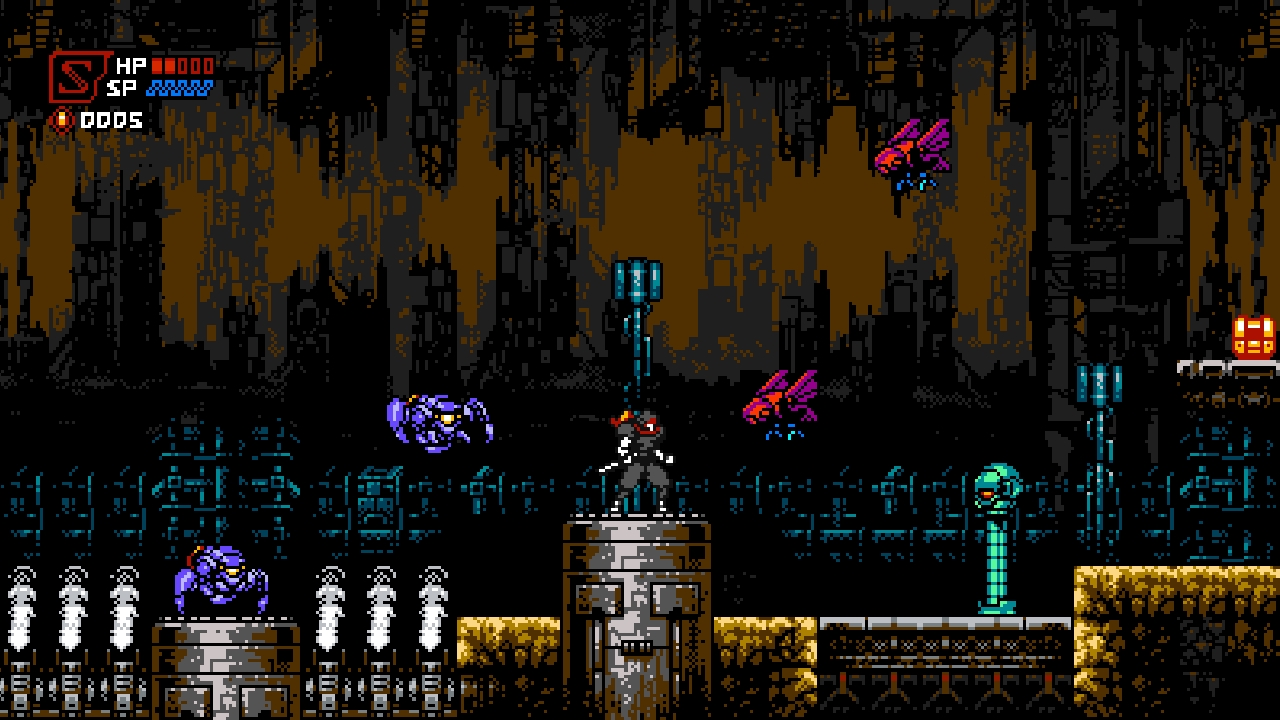 Much like with Shovel Knight, Cyber Shadow so far seems to do everything perfectly when crafting a tribute to classic NES action games. On its surface, it could easily pass as a title from the early ’90s. But the extra little graphical touches, level design, abilities and more all take a modern approach in subtle ways, creating what should be a highly interesting game not just for retro enthusiasts, but all gamers in general. Cyber Shadow doesn’t have a release window yet, but will be due out on all major platforms, so you’ll definitely have a chance to check it out.