First-person shooters have evolved a lot over the last few decades. These changes and advancements were necessary and did a lot in moving the genre forward, but the classic shooters from the ’90s still hold up well. Wolfenstein 3D, Duke Nukem and of course Doom were all integral titles in popularizing the genre which contributed to the force it has become in the gaming world. Ion Maiden, which much to my dismay does not star a trooper named Eddie, is an homage to these titles. Ion Maiden looks and plays like an unearthed relic from 1995, but for anyone who enjoyed these titles in their younger years, this not a bad thing at all.

As a true successor to the classic shooters of the twentieth century, Ion Maiden is built using the EDuke32 branch of the Build engine that was used for the early 3D shooters. The use of this engine allows for an authentic recreation of the games this title pays homage to but does work in some modern touches. Localized damage, such as headshots, have been added so this title won’t feel so archaic for gamers who cut their teeth on more modern shooters. The levels are all handcrafted and offer a variety of weapons, such as grenade launders, shotguns and triple barrel revolvers. While we did not get to play with it during the PAX demo, word on the street is level editors will be available on launch date. 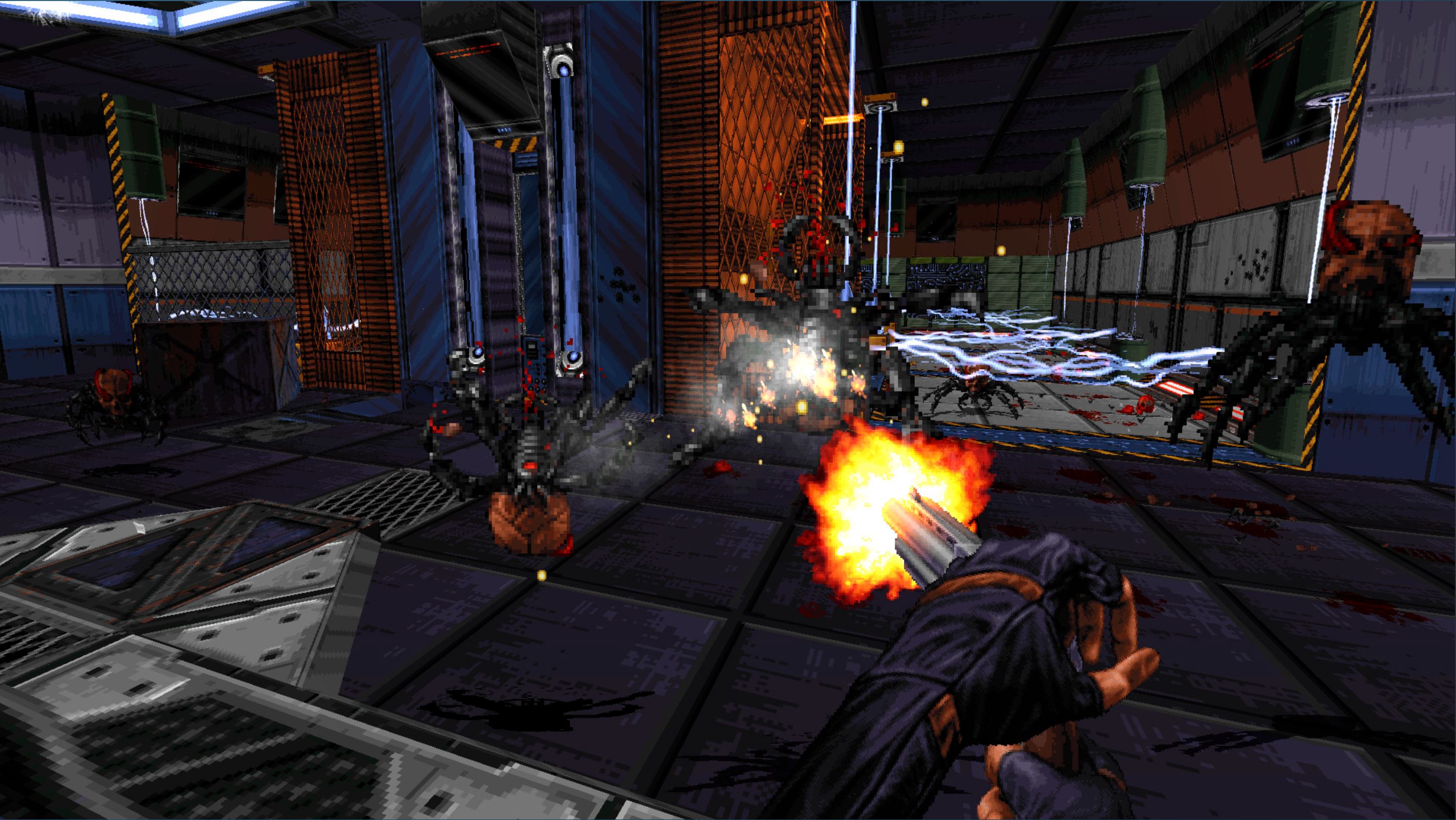 While not immediately apparent, Ion Maiden is a prequel to the 2016 title Bombshell, though both games are very different from each other. Players will once again be taking on the role of Shelley “Bombshell” Harrison, who is working with the Global Defense Force as a bomb disposal. She is going up again Dr. Jadus Heskel, a transhumanist cult leader who happens to have an army of cybernetically-enhanced sodliers at his disposal. While Harrison’s trade may be disarming bombs, Ion Maiden has her assuming the standard shooter heroine trope of one woman army, where she leaves of a wake of destruction as she travels through Neo DC, laying waste to Heskel’s minions that stand in her way.

Upon playing Ion Maiden there were no doubts about what games influenced it. The pixel art style and old timey gameplay made Ion Maiden feel like it would have been right at home with any of the titles mentioned in the first paragraph. Even the difficulty setting was reminiscent of Doom’s “I’m Too Young To Die” or “Hurt Me Plenty.” The regular difficulty was challenging, I died a lot but typically made it a bit further with each respawn. There weren’t too many checkpoints or straightforward linear paths. The area in the demo was a large mansion and some of the surrounding exterior. Leaving from one area to another was seamless. Color coded keys and random armor boosts scattered throughout the map further paid tribute to its influences. The enemies were a mixture of the cybernetic cultist soldiers and some rather demonic-looking creatures. The gameplay mechanics seemed simplified and primitive compared to modern shooters, but judging them against the earlier titles they were par for the course. 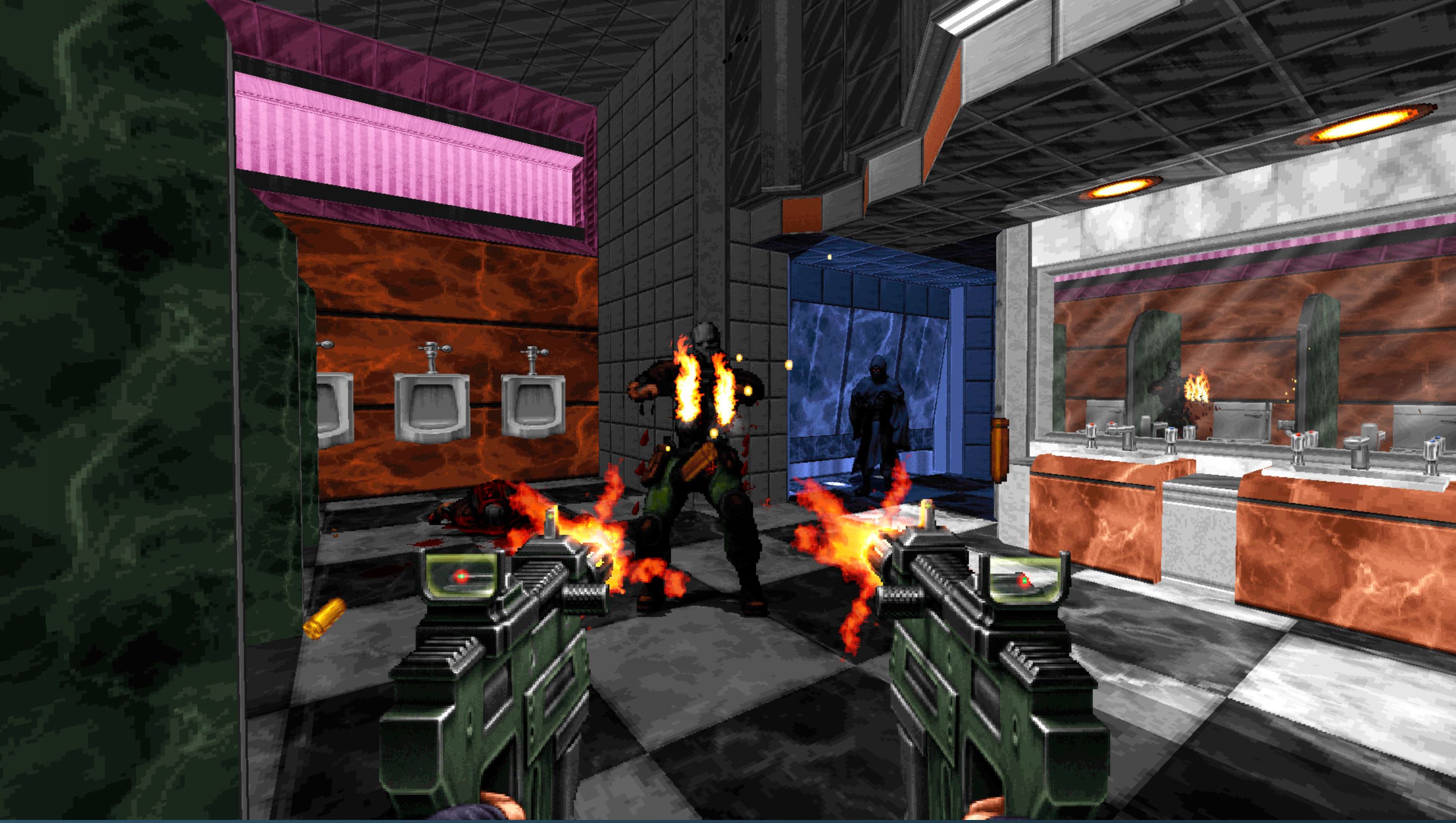 Ion Maiden is one of those titles where it’s clearly to meant to be an homage to older games and invoke nostalgia from older gamers or at least fans of retro games. There’s a few modern touches here and there, but those mainly address quality of life issues that are common with games from 20-30 years ago. Ion Maiden is not as impressive as Doom or Wolfenstein 3D was back in their day, but fans of those games need to check out this title. Ion Maiden demonstrates that games built on a 25 year old engine will have some limitations compared to modern titles, but that doesn’t prevent them from being a enjoyable and worthwhile time. While we only played a small portion of the game, what we did play indicates that this is a throwback to old school shooters done properly.