Life is a stressful thing.  Bills mount up while time evaporates and managing all the responsibilities that the grown-ups of childhood seemed to handle so effortlessly can leave you feeling like a failure who can only hope that nobody catches on to how completely you’re faking it.  Seeing the pressure mount up in their human is enough to make a poor bird’s feathers molt.  If only there was something it could do to make their person happier.  Something fun, adorable and distracting, like maybe skateboarding.  It’s only a little thing, but a moment of happiness doesn’t have to be huge to be effective.

SkateBird is several things all at once.  It’s a game about a bird riding a fingerboard through a skate park made of household objects.  It’s a game about making your person happy.  Most importantly, it’s a game about trying your best.  Points are nice and pulling off a sweet trick chain will always feel awesome, but you’re an adorable little bird riding a tiny skateboard flapping like mad to get just that little extra bit of air time, and it’s almost impossible to not smile while playing. 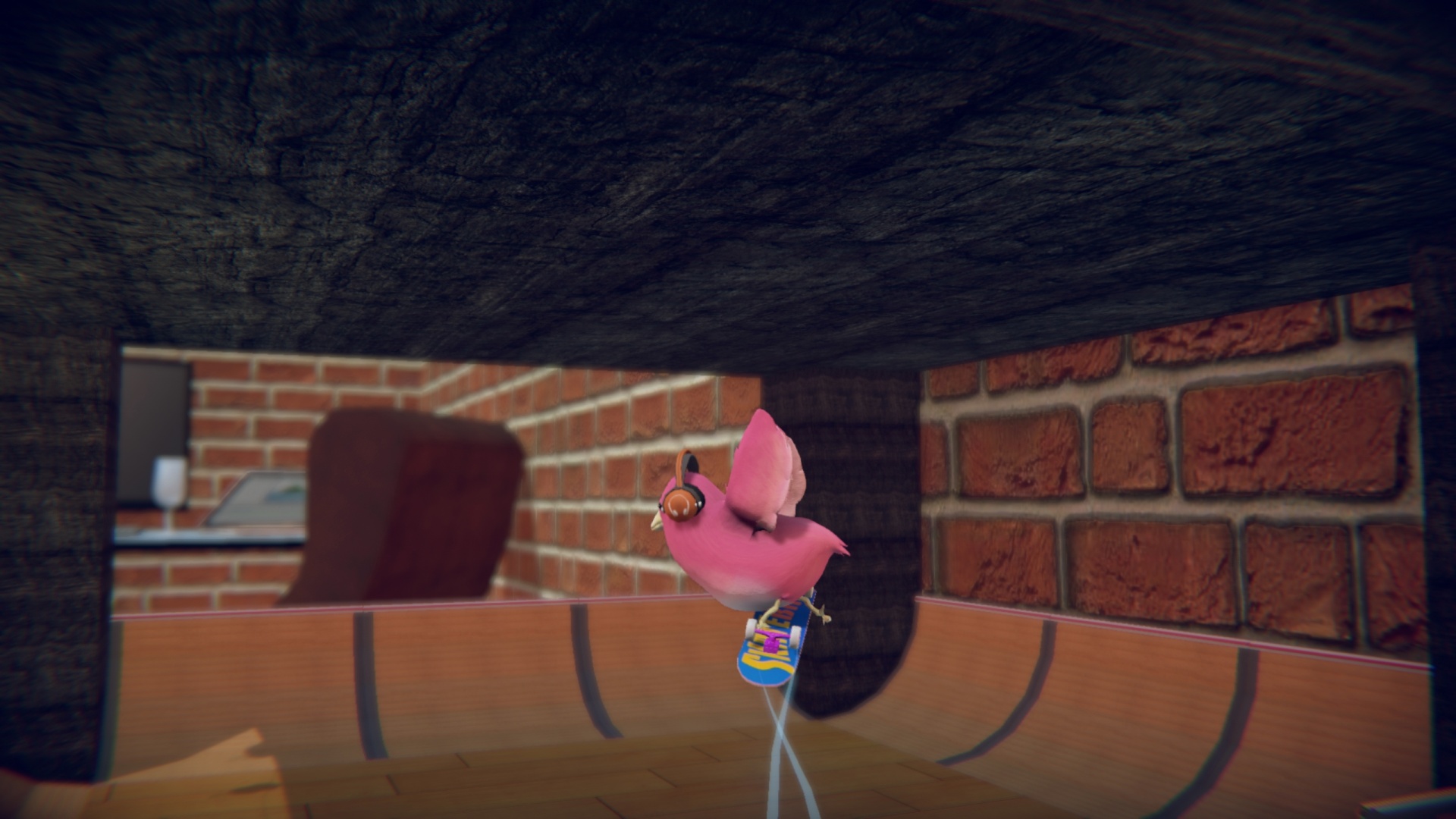 That doesn’t mean SkateBird isn’t a “real” skateboarding game, though.  The bird and its skate park may be cute but you still need to bust out the moves to make the most of the environments, constantly chasing the combo chain while trying to judge when to bank the points.  Tricks are performed in the classic “direction plus button” style and each new one in a chain grants +1 to the bonus multiplier, whether that be grinding a rail made of pens or switching holds during the air-time over a vertical gap between curved cardboard ramps held together by duct tape.  Stop and the combo ends, adding the points to your score, but crash and all that effort goes down the tubes.  On the other hand, just think of the score a couple more tricks will add to the total, if you can just pull them off without bailing.  While this may be the standard extreme sports risk/reward setup, it’s as tricky a call to make today as it was back when the genre was new.

The build I got to play back during PAX East was an early one, which makes sense seeing as SkateBird hasn’t been in development all that long.  I’ll admit to having a bit of fun breaking the game in ways that were completely unfair to the poor thing, but when playing properly there was a solid Tony Hawk-style trick boarding game underneath the cuteness.  The level design in particular was off to a nice start, with the demo area set on a large platform in the brick-walled corner of what will probably be a living room when there’s more furniture than just a tiny bird’s skate park in there.  The lower area had some nice grinding opportunities with rails on the edge of the platform, plus a half-pipe area and a large tube to skate through.  A little exploration turned up a series of ramps leading to the upper area, complete with trick-ready ramps at the switchbacks so you can work on the combo during the ride up, and up top there was a rink set on a glass-bottomed table plus a large gap to transfer over leading to another raised area.  The entire park was bursting with personality, from the Thrusher magazines leaning against the wall to the staplers you could grind off.  Just because it’s adorable doesn’t mean it can’t be clever, too. 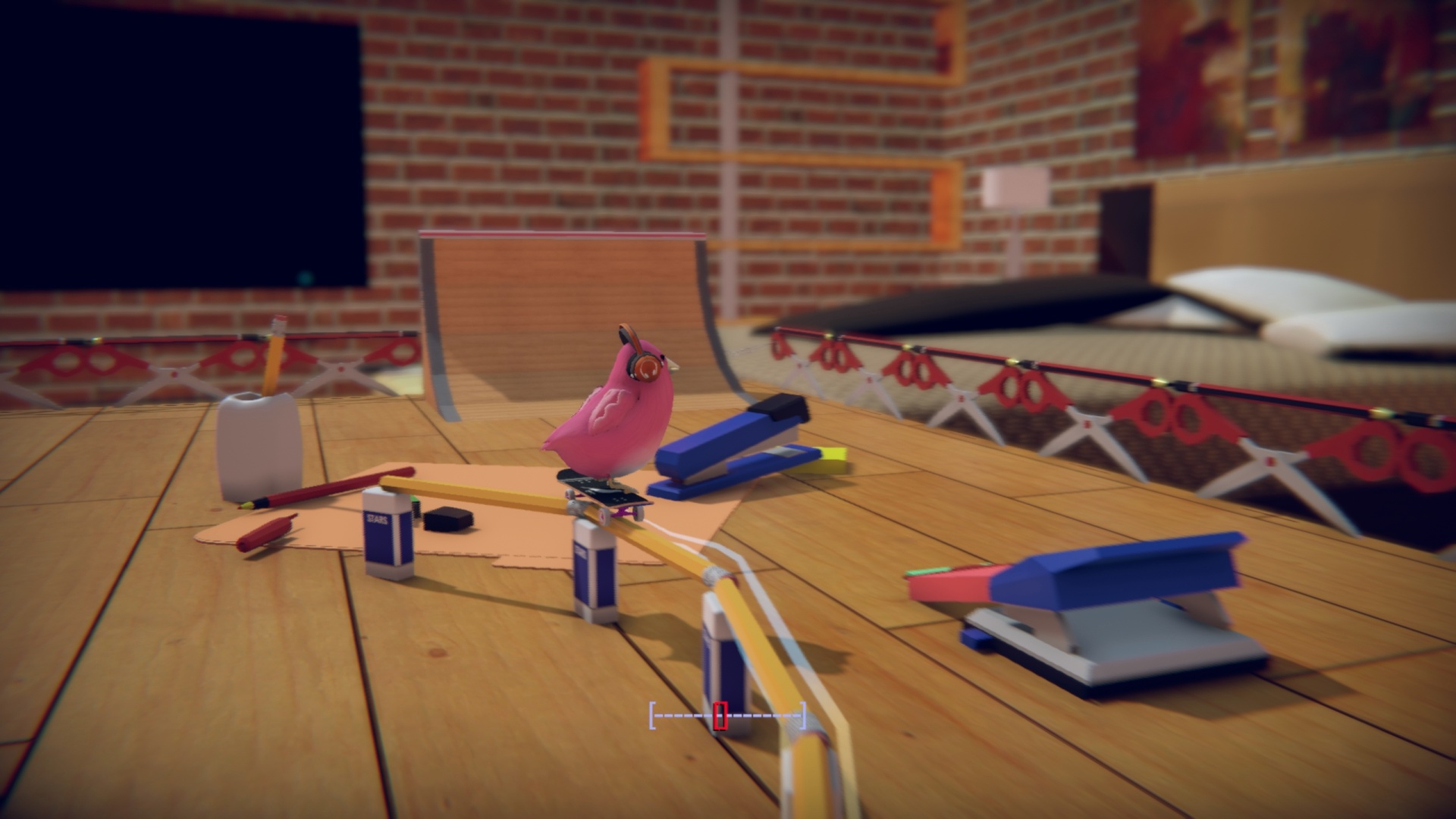 While it’s still incredibly early, the heart of SkateBird is that of a pure extreme-sport game that could have stood beside the Tony Hawks and Dave Mirras (but not Jonny Mosely Mad Trix, because let’s not get crazy here) of the day.  It’s cute beyond belief but underneath that is a skateboarding engine that’s all about finding the best line and maximizing its potential.  Not for fame or money, of course, but because you’re a little bird wearing tiny headphones trying its best to make its human happy.  However strong the trick line or high the combo, the fact that the little guy hopped on a fingerboard and tried should be enough.