It says a lot about a game when there are multiple writers here at Hardcore Gamer fighting for a chance to cover it at major events and during any preview opportunities. This was the case with Afterparty for fellow HG writer Chris Shive and myself, as we both immediately wanted a chance to check it out. For me, I wanted to take a look because developer Night School Studio’s previous title, Oxenfree, was one of this decade’s best adventure games (at least in my opinion). And given that game’s unique approaches to dialogue, intriguing and intelligent story, amazing characters, and even the brilliant way they handled New Game Plus, I just had to see how they could possibly match or even top a game of such quality, while still crafting something unique.

Chris, meanwhile, wanted to play it mainly because he heard it was a game where the goal is to beat Satan in a drinking contest.

Which, to be fair, is also why I wanted to check out the game as well. 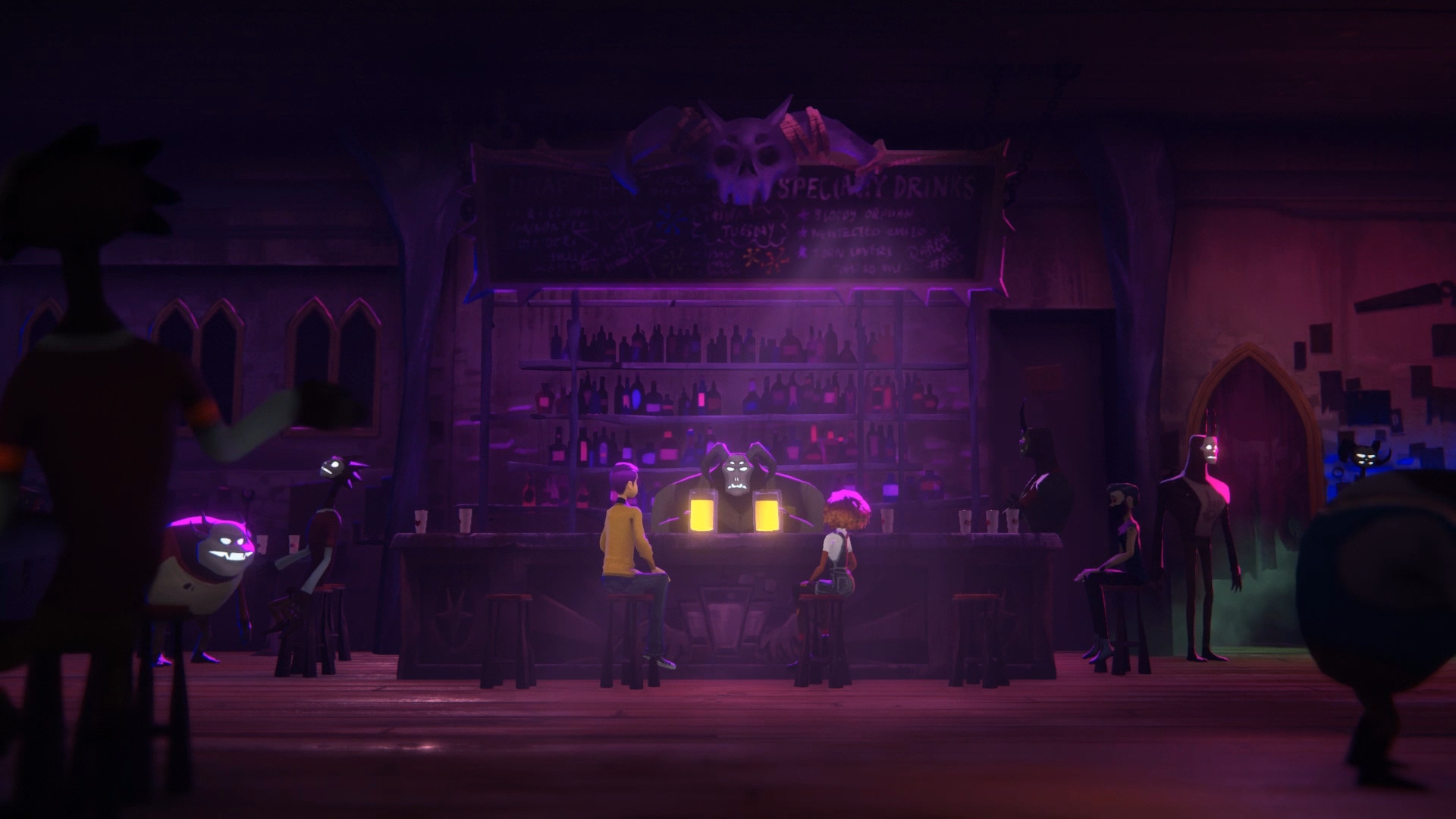 Wait, there was a point to this, right? Oh yeah, both Chris and I were extremely excited to see Afterparty for different reasons, so in the end, we decided to both check it out together. Which was actually an appropriate approach, given the game itself centers around another pair of friends, Milo and Lola, having to also work together. Milo tends to come across as the more timid and worrysome of the two, whereas Lola feels like she could easily mess you up even without a few drinks in her. And these college kids just have to solve the simple task of escaping Hell.

Yes, our two heroes are in Hell. Not only that, but they have no memory of how they got there, or what they did to earn them a spot in the underworld. The demo on display essentially showcased part of the introductory section. One of the taxi drivers on the River Styx, Sam, drops the duo off (whom you can switch between depending on the current narrative), then decides to take them to a bar to help get used to things. After some initial fun chit-chat along the way, we arrive at the bar, with a notable variety of drinks to order.

The liquor, however, isn’t just for show or plot purposes. No, it actually helps form the rather unique backbone of Afterparty. Each bar you hit has multiple drinks to choose from and each unlocks potential new dialogue options. And depending on your taste in poison, the options you get have different moods. One might give you options with more confidence. Maybe one allows you to come off as more mellow. Or potentially flirty. Heck, maybe talk like a pirate, even! Much like how real-life drinks pack certain kinds of punches, the cocktails you choose allow for certain hidden choices that could shape your game. As strange minds think alike, however, both Chris and I chose the “Famous Last Words” drink in each of our demos, so we can’t confirm the different options and effects yet. 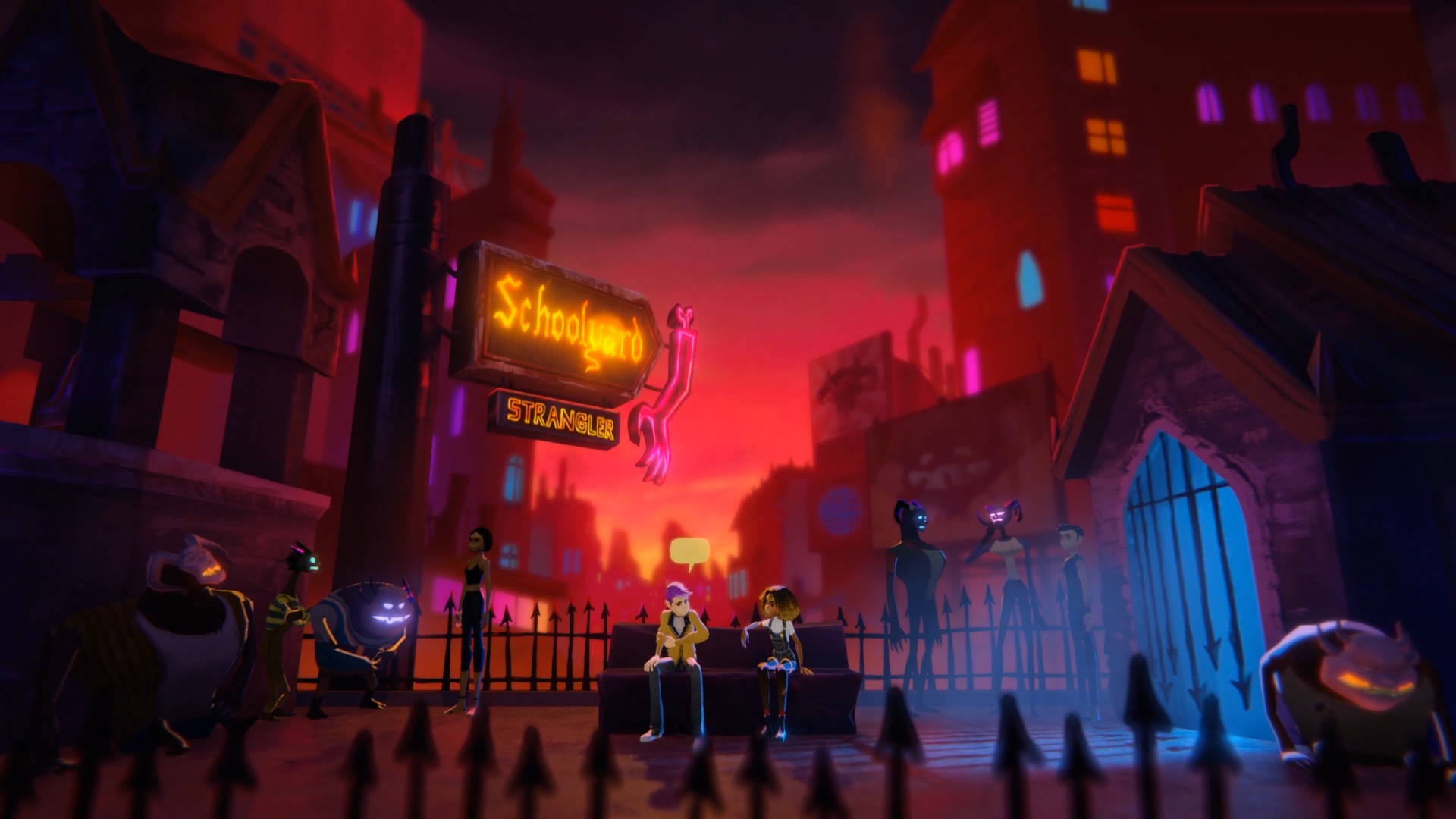 It isn’t simple as “order drink, unlock new dialogue,” though. You have to actually down these spirits like a champ. With the press of a button, whichever character you’re playing with as the moment begins to down what they have, and a meter begins to fill. After that, it ticks down in a fashion similar to the devil’s thorn power-up from fellow dialogue-focused adventure game The Council. The main difference here, though, is that as long as you still have your drink, you can refill your meter by holding down your button for as long as you’d like. So there’s a bit of a challenge in knowing exactly when to wet your whistle, even conserving your beverage for when you feel you may need some unique options concerning what to say.

The secondary challenge, though, is in making sure the booze you down doesn’t impair your skills when you need them. See, in order to advance in certain areas in Afterparty, Milo and Lola have to compete in various bar challenges. Beer pong, arm wrestling, Dance Dance Revolution, et cetera. Sure, downing some hair of the dog may provide you with an epic burn to use that can throw off your opponent, but in the case of something like beer pong, it makes it harder to aim your shots. The challenges add another nice twist that provides a good bit of variety, with Chris noting that it breaks up any sections with a lot of walking and talking.

The reason why we were engaging in beer pong, mind you, was to impress a fellow prisoner of Hell in order to get invited to their currently ongoing “Death Day” party, where we could learn more about things from Sam. He seemed like a nice guy, so naturally, it turns out he was actually a famous serial killer. Chris pointed out that the sense of humor can be a tad predictable (a lot of Hell-related jokes across comedy do share a lot of the same elements), but overall, the writing was still as sharp as ever and still funny overall, with signs that we will indeed explore Lola and Milo’s relationship and this version of Hell in general in greater detail. In fact, in a shift from Oxenfree’s deserted island, you have several NPCs to work with, some of whom may have optional quests. 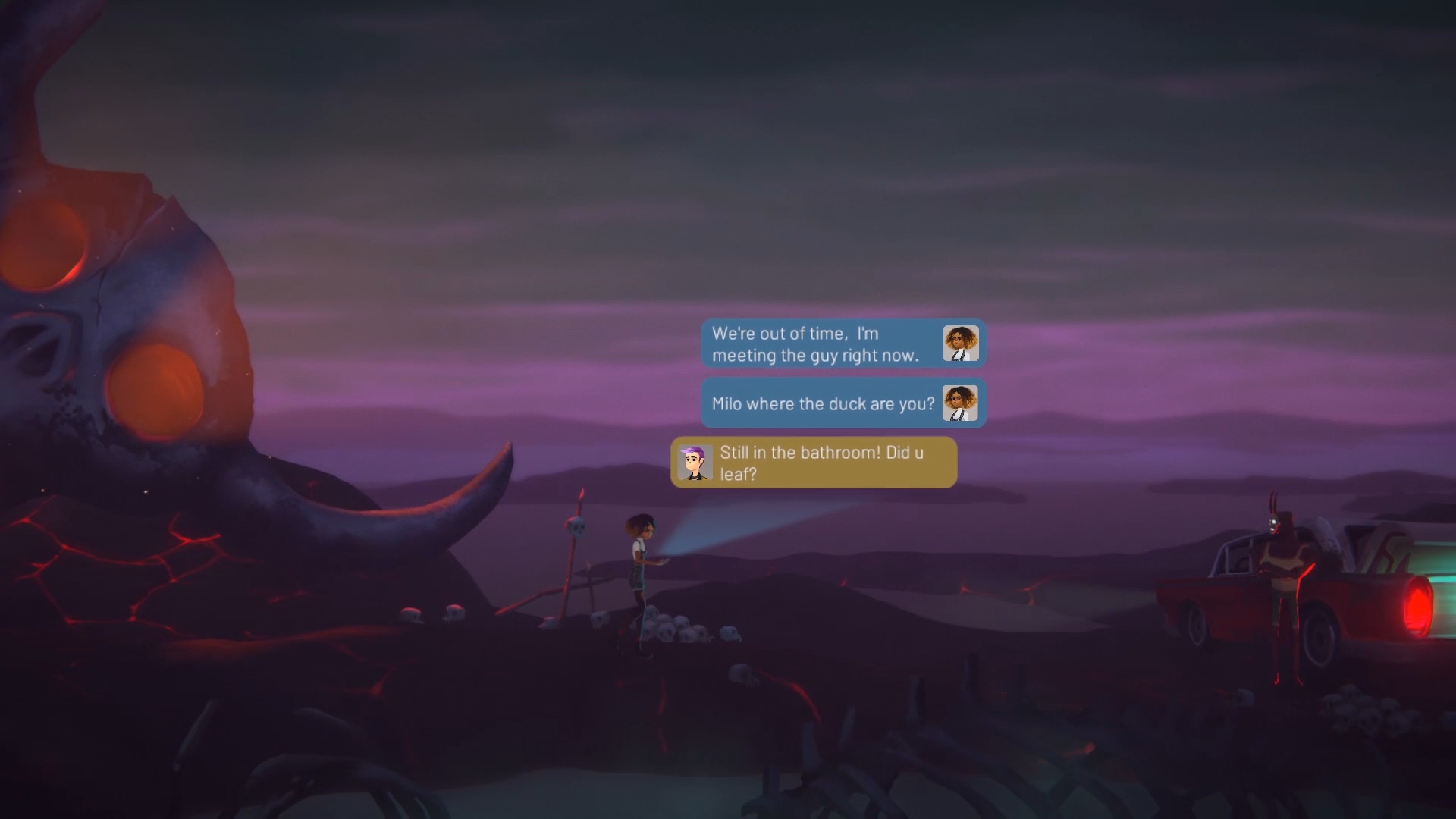 While Afterparty seems to be shaping up to be a terrific game on its own, there was still one part of Oxenfree that we had to compare it to, as was mentioned earlier: New Game Plus. Without spoiling anything, Oxenfree implemented New Game Plus brilliantly, so will Afterparty have something similar? Well, it won’t have New Game Plus, but when asked about it, Night School has said that there will indeed be reasons to replay the game. There will be multiple endings and outcomes, but one has to wonder if there’s something else up their sleeve…

In the end, both Chris and myself walked away from Afterparty feeling like what we had experienced showed a lot of promise. Mind you, we only had a short demo to work with, but it was an impressive little sip of things to come nonetheless. For Chris, he saw a game with a clever premise inspired by classic point-and-click adventures that nicely mixed in themes relevant to young adulthood. For me, it was a sign of a sweet successor to Oxenfree and a great game in its own right with a unique and twisted fantasy world and impressive dialogue mechanics. So it seems like Afterparty may be expertly designed enough to appeal to a wide variety of gamers, meaning we can’t wait for when it hits the PC (initially as an Epic Games Store exclusive) later this year.

(Oh, and if at anyone at Santa Monica Studio is reading this, please let it be known that any drinking contest between Kratos and Satan should take the form of the tricycle race from Revenge of the Nerds, of course.)