The end of the world is a trying time but if there’s one thing anime has taught us it’s that a plucky schoolgirl can stave off even the most deadly apocalypse.  There generally needs to be some kind of incentive aside from “Save humanity from its self-created demise,” but once they get going, there’s just no stopping the indomitable schoolgirl tsunami of righteous justice.  Super Crush K.O. may not be anime, but it still features a stylish young lady going up against an AI uprising that, somehow, for some inexplicable reason, kidnapped her kitten.  Pity the AI, for they know not what they’ve done.

Super Crush K.O. is a run & gun brawler that, on the surface, looks very different from Vertex Pop’s first two titles.  We Are Doomed and Graceful Explosion Machine were pure arcade games that looked the part, featuring bug-monsters and spaceships, but Super Crush K.O. features someone recognizably human fighting through videogameified real-world environments.  The unnamed girl takes on the robo-invaders in a pastel town, alternating attacks to keep their effectiveness high and busting out the super moves at the drop of a hat as one move flows to another.  She’s got the pure strength to fight off the AI uprising but chaining the moves together to keep the combo alive takes skill, and when one attack segues flawlessly into another, she feels like a young unstoppable force of nature. 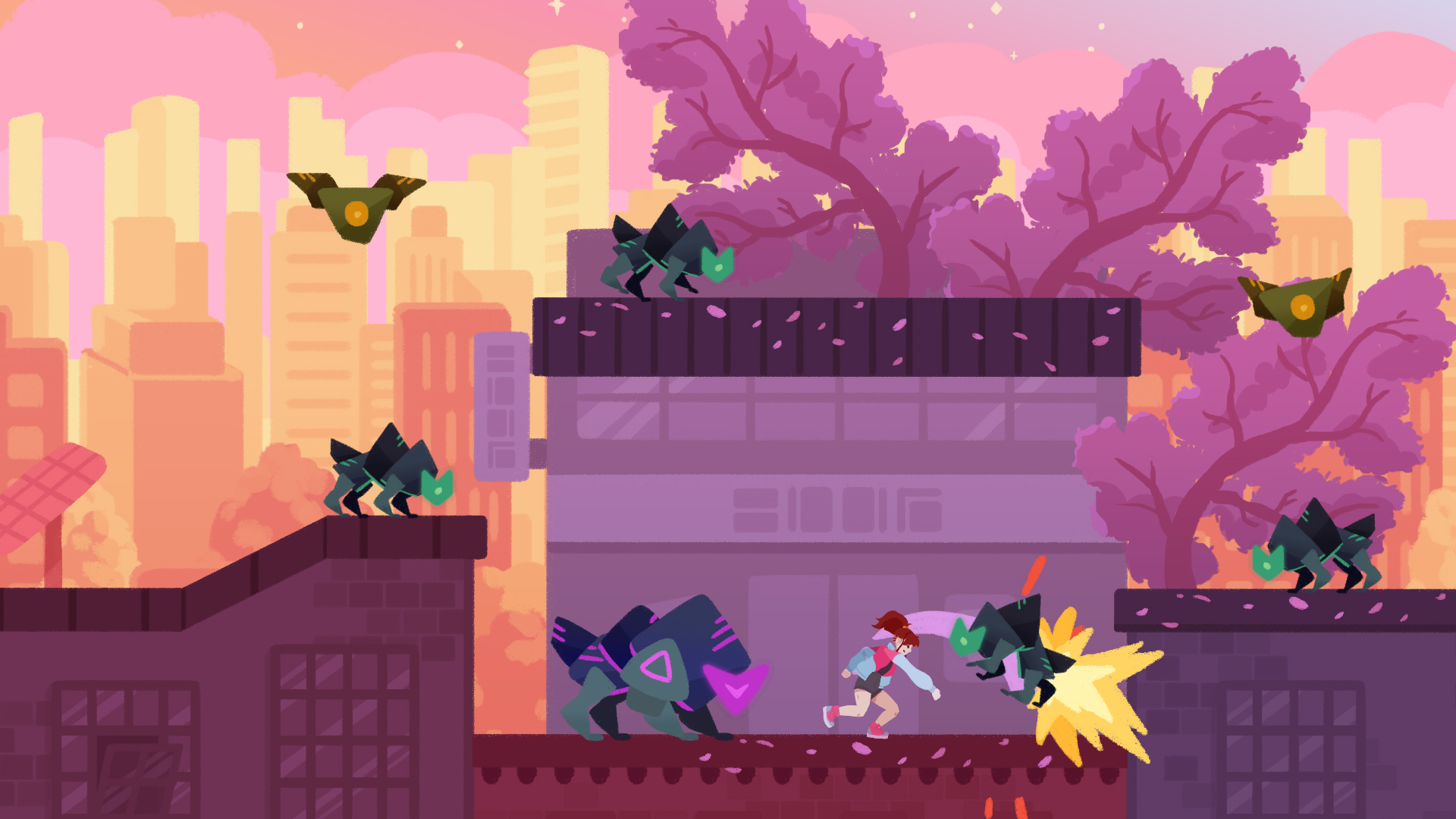 The PAX East demo started off, as most demos do, in the earliest stage of the game.  Initially all she’s got is a punch, complete with multi-punch combo to knock the enemies’ life bars down to size, but the other skills fill in quickly.  The gun kicks in next, locking on to enemies when you hold the fire button down, but it also rapidly runs low on ammo due to overuse.  Next up are the special moves and this is where the fighting gets especially fancy.  At the top of the screen are multiple gauges, the first being for health and the second gun ammo.  Gauge number three lets you bust out special attacks, the type of which is specified by a direction on the controller plus the button and destroyed enemies drop gems that fill the special gauge back up again.  It doesn’t take long before you’re in a situation where you start by punching a few popcorn enemies, then hit the dodge button to avoid and destroy a stray bullet, pull off a special uppercut right into a flying enemy’s face before firing back at the first round of enemies and using the gun’s recoil to stay in the air, then finally drop back to earth to dash-drill through the remaining robots.  The moves are designed to make sure there’s always an attack option available with no down time in each area, so long as you switch up the techniques on a reasonable basis.

As the demo moved on the enemies kept growing, from the first simple little dog-bots into giant crab-walkers with multiple attack patterns and a huge bar of health.  I’ll admit to not playing particularly well at the end, being too busy sorting out the possibilities in the various attack options to actually pay attention to the enemy patterns, but during the simpler parts where the robots were more concerned with being targets to learn the moves on rather than an actual threat the fighting system felt fantastic.  Working the combo system also bumps up a letter grade reward that carries over from one encounter to another so long as you don’t take a hit or let it time out, and though I didn’t get any S-ranks, I could see how a little more experience could make that happen.  While the two games couldn’t look much different, there’s a huge amount of Graceful Explosion Machine in Super Crush K.O. to the point where it almost feels like a spiritual sequel. 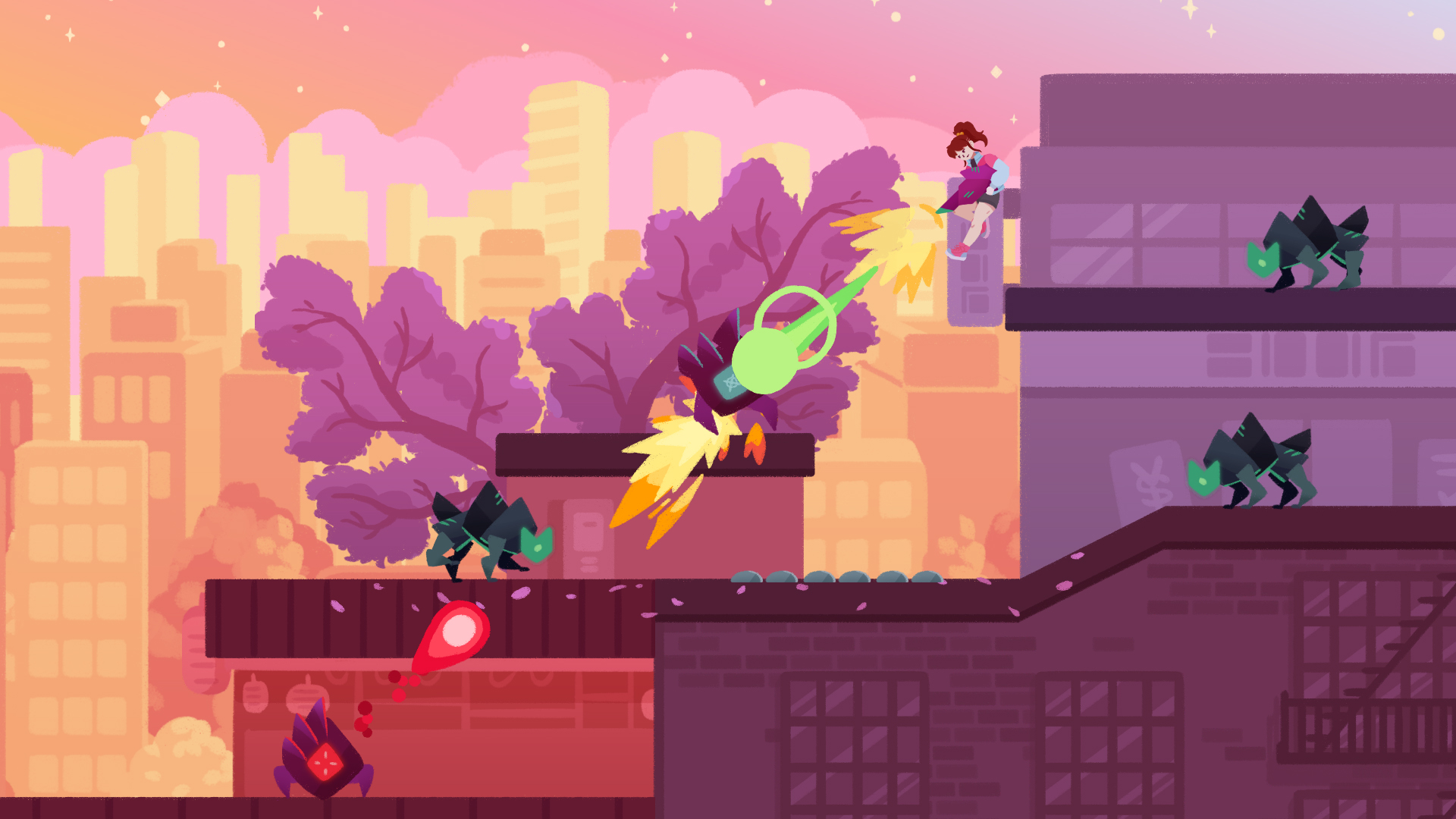 There’s a lot more to learn about Super Crush K.O., with details such as its story being kept under wraps for now, but the little taste I got on the show floor was a great introduction to a cute, stylish and nicely upbeat brawler/shooter.  Its tone is the polar opposite to a game like Contra, with pastels everywhere and a light, breezy tune for the background music, but its action promises to equal the arcade classics it draws inspiration from except more punchy, less shooty.  What’s driving the robot rebellion and how this ties in to a kidnapped kitten is a mystery for now, but seeing as the result is “beat on robots so they pop out gems to let you beat on robots even more,” even the flimsiest excuse seems like a good justification.