Free-to-play has long been that illusive gaming unicorn that could never seem to provide quality gaming at zero cost. It’s a rare thing these days to find a solid FtP that isn’t plagued by pay-to-play (or pay-to-win) micro transactions. The flip side is also creating an engaging experience that will tempt players to commit to its model. This isn’t to say that there haven’t been games that have done this well (I did play way too much Warframe once upon a time). It’s a general feeling within the gaming community, however, that FtP is associated with low quality and high spending.

Enter BandaiNamco, Round 8 Studio and NEOWIZ with an MMO that seeks to raise the bar for FtP. Bless Unleashed is an upcoming Xbox One exclusive that seeks to change the way we think about Free-to-play. Getting to sit down and preview the title, there was a lot about the game that promises a unique experience to MMO players. Taking inspiration from Bless Online, Bless Unleashed seeks to become a spiritual successor to the title by offering players a new take on the universe.

Bless Unleashed provides gameplay that is accessible to every level of player. It’s also an MMO that doesn’t require co-operative unless players wish. It’s a rare thing to find an MMO that doesn’t require players to work together in order to achieve progress. Having to raid, clear dungeons and finish story missions usually requires a team in many of the popular MMOs today. This decision came from the frustration of long queue times and a lack of communication between players. While also focusing on the single-player experience, Bless Unleashed hopes to create an accessible experience to all levels of players. 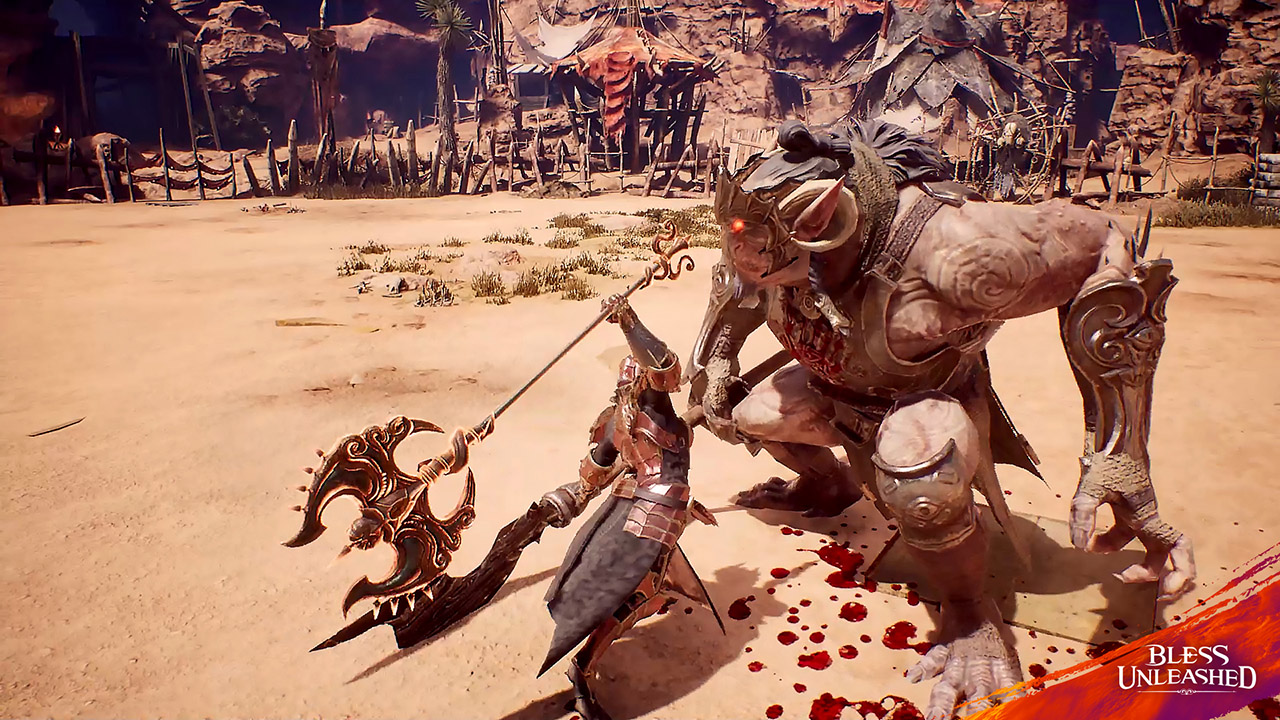 The focus on accessibility can also be seen in Bless’ combat mechanics. Combat happens in real time with players utilizing a combo system to build up stronger attacks. It’s a system that lends itself well to more casual players who are not familiar with mechanics and it’s a style of gameplay that offers much flexibility to more veteran players. Five unique classes offer a variety of combat options for every style of play. Mainly gravitating towards the tank characters in class-based games, I asked Producer David Jaloza to give me a run down of different characters. He explained to me that because the title is also focusing on solo play, each character is able to hold their own in PVP and PVE. Some are more hardy than others, for example the Berserker with its heavy axe packs a wallop and is the most physically intimidating, but the Mage has spells for survivability that make it a class that can hold its own. Each class has its own unique skill set and combo list that feel different. Playing the Berserker and then the Mage felt different. The combo system is also satisfying once it has been learned and yields excellent results against enemies.

Playing through the demo area, I was able to run through a basic dungeon with enemies and bosses. A variety of enemies gave a high fantasy flavor to the game; it’s a title that didn’t skimp on gorgeous aesthetics. I quickly dispatched basic enemies and made my way to the first boss. A giant ogre blocked my path and we traded blows. I was impressed by the combat mechanics, as dodges and blocks have been incorporated into gameplay. What I thought was most impressive, however, was how each enemy displayed excellent telemetry. As someone who is highly interested in technical gameplay, being able to predict enemy behavior and decide on a response creates the most fulfilling experience. I tested the boundaries by dancing around the ogre and checking behaviors based on distance. I got right up in its face and then retreated further away to check its responses. Detailed fights in Bless Unleashed have shown that it’s not just a surface level hack-n-slash. It’s a title with depth.

After dispatching the ogre, we weren’t done just yet. I made my way to an open arena where the final boss awaited me. It was smaller than an ogre and faster as well. It exhibited animal-like behavior (with a design reminiscent of Predator). This guy was going to be more of a challenge. I was able to dance around the ogre with ease due to its larger size. Yet with this final boss, I had to play the distance game. This is where the enemy telemetry truly shines as I was able to judge attacks and adjust myself properly. This enemy’s stun mechanics and AOEs, however, gave me a hard time and wore me down. Starting again, previous experience assisted me in finding the enemy’s opening and attacking. Playing with the Berserker made me feel powerful with crushing blows from my axe and sustainable skills. When I played this same fight with the Mage, my tactics needed to change in order to achieve victory. 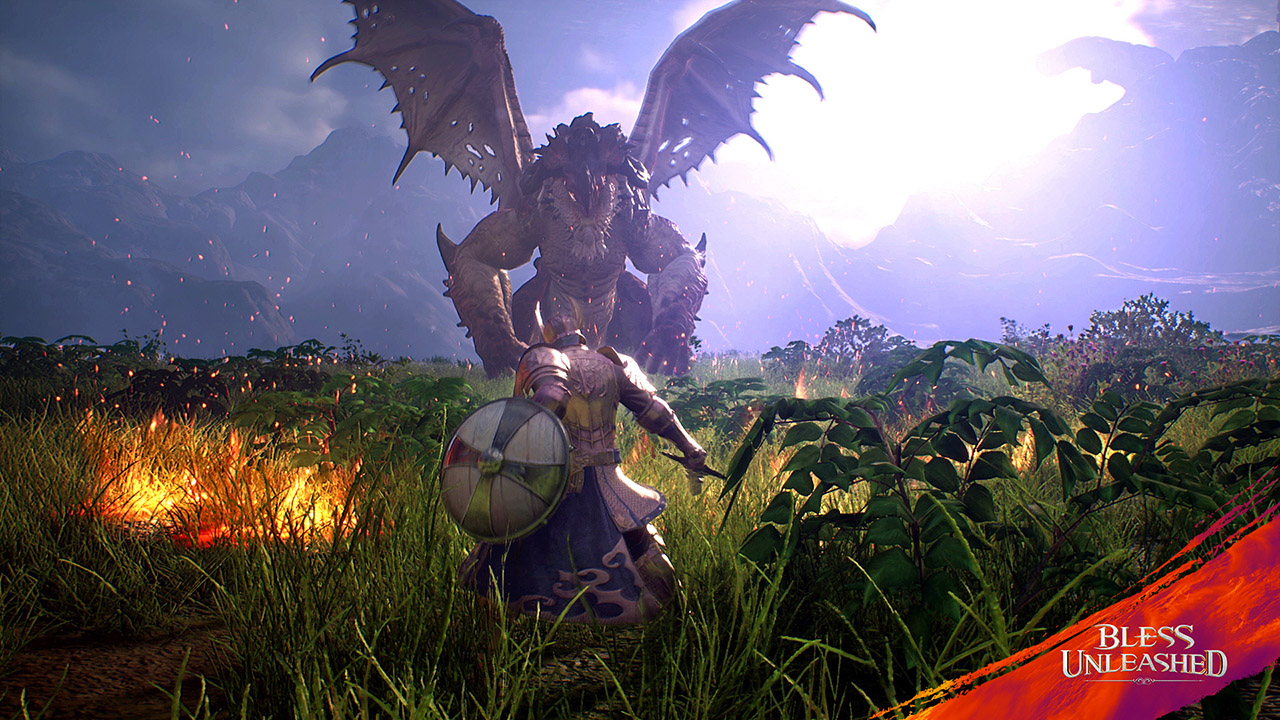 It was true that playing through the dungeon I was able to handle it alone without other help. This is the overarching goal Bless Unleashed hopes to achieve. Players can team up together or they can play alone in a massive world. Exploration and customization will have a major place in the title. While my time playing was limited to the dungeon, David explained to me that there will be a massive world to explore with tons of gear and loot. While Bless Unleashed won’t be out until later in 2019, it’s gearing up to be an amazing Xbox One exclusive that puts players at the forefront. It’s a quality Free-to-play that feels worthy of money regardless. The whole time, I kept asking, “And this is free? No money needed?” Players will be relieved to find that micro-transactions will be limited to cosmetic items and won’t even be necessary to enjoy the game itself.

Bless Unleashed has come out of the gate ready to show its stuff. It feels like an accessible title available to all kinds of players while maintaining high standards. While I wasn’t able to get a feel for the narrative of the game, we’ll be keeping tabs on its development as it gets closer to launch. Bless Unleashed is looking to shake up the Free-to-play and MMO genres while giving Xbox players an exclusive to celebrate.