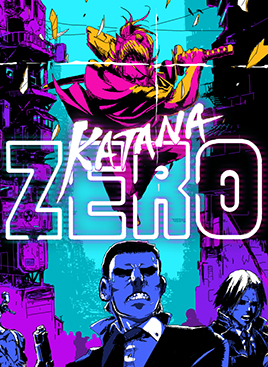 Katana Zero is the type of game whose hidden, maybe underplayed elements may well be its most interesting and longer-lasting talking points. Dare we say, the very thing that will keep people hooked on the possibilities of a follow-up, albeit tainted by the suggestion that what we’ve been offered here, feels a touch inadequate. That’s not to say the main hook — its bullet-time infused, hyper-responsive, do-or-die combat — should be overlooked or dismissed, regardless of how close to its inspirations the game may stand. Far from it; if you’re the type of person who revels in that all-or-nothing, reflex-heavy style of play that Hotline Miami helped popularize with its looming just-out-of-shot risk of failure, Katana Zero will most certainly whet the appetite of those looking for their next fix. Developer Askiisoft’s neo-noir themed, side-scrolling entry delivers on the necessities for madness with a purpose — all in the hopes of doing it all over again in the next, succeeding room of sloped corridors, closed doors and foes best left unaware of your presence.

The end result is far from perfect and the disruptive “to be continued” by the game’s close does feel anti-climactic. Just as the game appears to begin unraveling a fair number of previously loose ends and questions, though interesting, begin to rack up over the course of the game’s brief events. But credit where credit’s due: as familiar and admittedly similar large swathes of the in-game action may seem, Katana Zero delivers on a tale that is at times intriguing, and in others, rather gripping. When the bond between you and a young little girl, as much the suspicious intentions of who you assume is a psychologist there to help and assist you (in more ways than one), become far less straightforward, the game finds a way to keep you locked into the possible dread and desperation that may be about to show itself. All of which dressed in what can only be described as a more retro-glazed interpretation of that 80’s throwback style. As you soon discover though, the deliberate — and clever as a result — clash between the vibrancy of its character sprites and the desaturated, near-monotonous figure of the environments, is but a front for what is a suggestion towards tackling tales of war, crime, trauma and some good old-fashioned time manipulation thrown in for good measure.

But this is all the narrative is: suggestions. While never really coming across as conclusive in its progression — persistently dropping and introducing many a new element or character or pivotal piece of information without ever really exploring in-depth any of the above — the game rounds off its never-ending cascade of unanswered questions on a cliff-hanger that it doesn’t quite earn. The best thing you can say about Katana Zero is that the anxious and uncertain nature of its setting is its greatest asset. Odd as it is to find the obviously-marketed component, the action-platforming combat, pushed to the side here is a sign of how, in a way, the game subverts the expectation on how much one can get and/or take away from a game all about dying until the right solution is found. Even if the attempts at unease and genuine dilemma don’t always pay off — a crucial choice half-way failing to have any gravitas or weight; a critical moment in the story confined to mere trial-and-error/brute-force puzzle-solving. 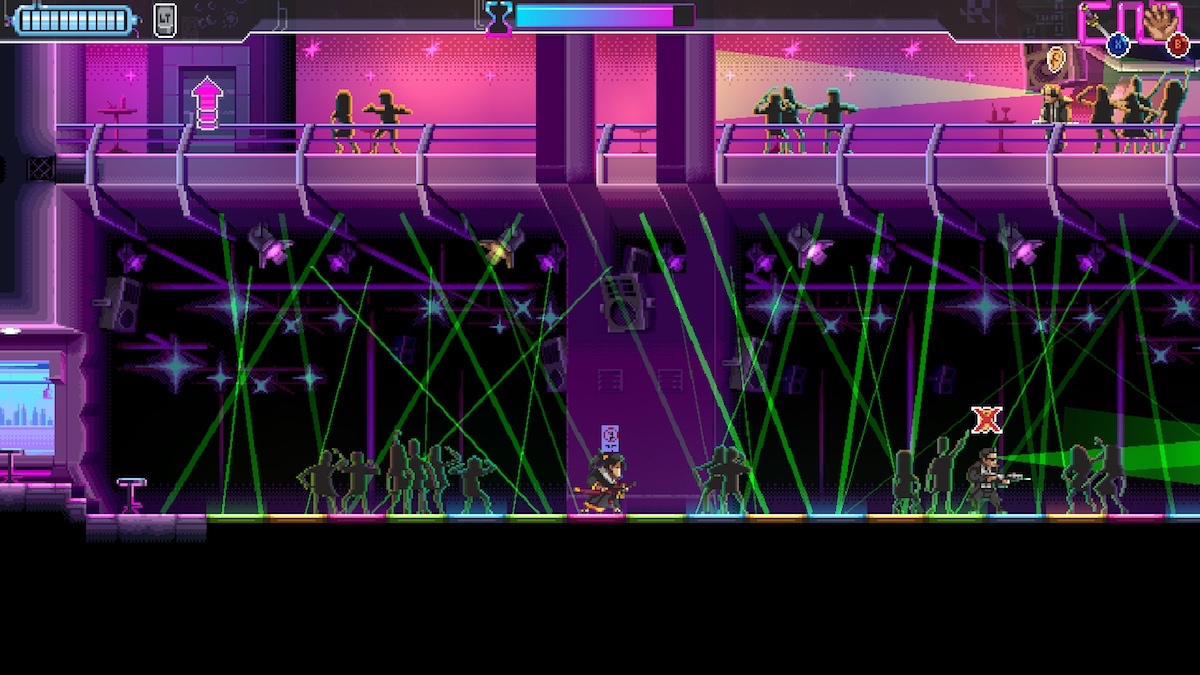 Fortunately, the frequent puzzle-lite interplay during combat — set across primarily a series of contained interiors containing a select number of bad guys to take down — as well as the perilous possibility that things could slip up at any moment are rarely out of sight. And like its contemporaries, Katana Zero makes sure to keep players thinking at every turn while retaining that consistent style that is the splicing of real-time and slow-mo bullet-deflecting alike. There’s genuine fun to be found, especially when you eventually (finally) manage to keep track of when certain enemies are likely to attack or fire back — timing one’s use of slow-mo to perfection and sending that pixel dot of a bullet back at the enemy. Granted, later stages can suffer from relying too much on repeated enemy types and while circumnavigating hostile positions becomes a more important thing to account for, the variety in environment styles and locales sadly isn’t matched by the range of enemy types.

But to reiterate the opening point, it would be a lie to declare that Katana Zero’s staying power is simply in its gameplay, its combat — adequate and stylish it may be in considerable doses. As splendid its pixellated gore and decapitating of foes may be — how that extra level of detail pours out from character animation too, expelling small little quirks — there’s an air of familiarity about what the game offers here, or rather what new ideas it, sadly, fails to conjure. As intoxicating its “die and it’s right back to the start” cycle may be and how that rush of emotion elevates even higher when the pain of falling at the last hurdle — and the game goes about rewinds one’s action via its VHS-esque aesthetic, undoing all your good work in the process. 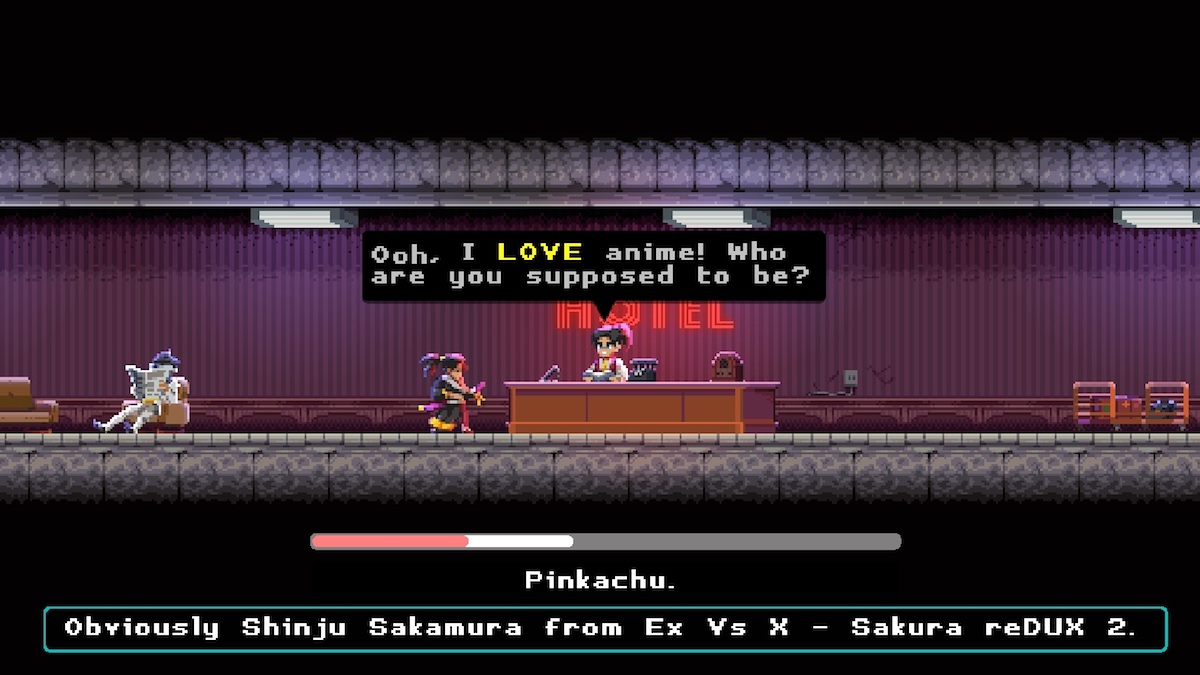 There’s no denying Askiisoft have studied the methodology of this particular niche in platformers. Of enemies taking little to become aware of your presence, occasionally attempting to get the drop on you through inter-connected doors if you’re not careful; some detouring entirely through alternate doors and ramps to get behind you. Unfortunately the main gripe with Katana Zero once more is in the fact the game never seems to commit to a new concept or idea — to explore it further and capitalize on the tone it so wonderfully carves for itself and the tale it wants to tell. Even the added mechanics to its dialog options — namely the fact you can interrupt characters by responding while your meter is in the red — never adds up to anything that seems consequential or a by-product of your choices previous.

Likewise, while certain dialog options may provide small glimpses of alternate outcomes, the overall story is barely changed. But when it’s at its most chaotic and rampantly so, Katana Zero’s antics shine in delightful little ways. Even with the simplified level design that — outside of a few neat stealth-based gimmicks and level-exclusive set-pieces sprinkled about the four to five hour run-time — sticks a little too close to the same tried-and-tested template. A large chunk of the running intrigue then stems from its story and its world-building, specifically the ways Askiisoft distort and manipulate both sound and imagery to further illustrate Katana Zero’s all-encompassing unsettled tone and sense that all, as you might guess, is not right with the downtrodden world it paints. 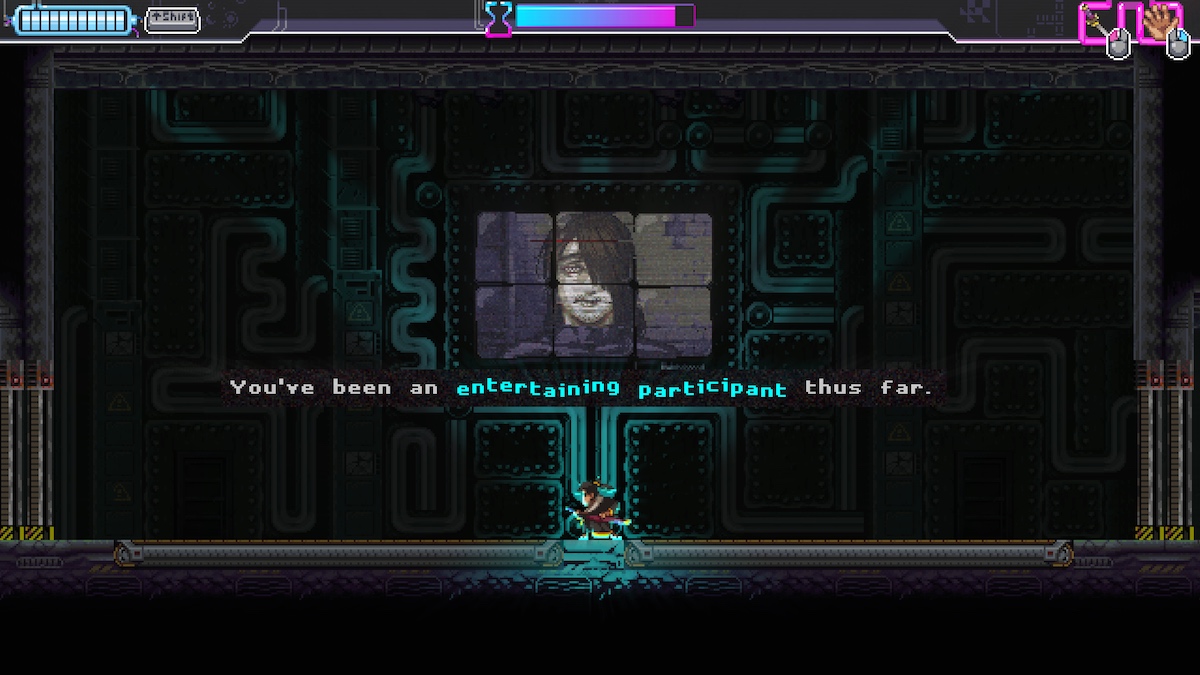 A world still recovering from the calamities of war and of a populous now more than used to the presence of crime and resulting violence. It’s not quite future-dystopia — a cliche the game just about avoids falling into — but at the same time, much like its gameplay, Katana Zero never really seems comfortable with expanding on any of the thematic or artistic ideas it puts forward, both in and out of gameplay. This despite some neat gameplay twists, manipulating of player interaction and generally flipping conventions on their head albeit for a brief time. It’s disappointing that such moments are fleeting and feel like brief flashes meant to simply break up the frantic pace of gameplay as Katana Zero does a great job at dressing its narrative, its premise and the general tone in an even more uncomfortable demeanor as the tale progresses to its would-be climax.

It’s this indecisive nature that really comes to the forefront during the narrative’s second part, when the nature of the would-be protagonist, The Dragon, is slowly, suggestively revealed and more of the world’s dysfunctional and anxious leanings are granted some explanation but never really any time to expand. Would-be boss fights as a result suffering from a lack of relevancy and that very same weight the other mechanics fail to build to any crucial degree. Treated more as tests of one’s skills, fair a practice that may be on its own, but when taking other elements into account, only add to the very many questions the player is likely to ask. 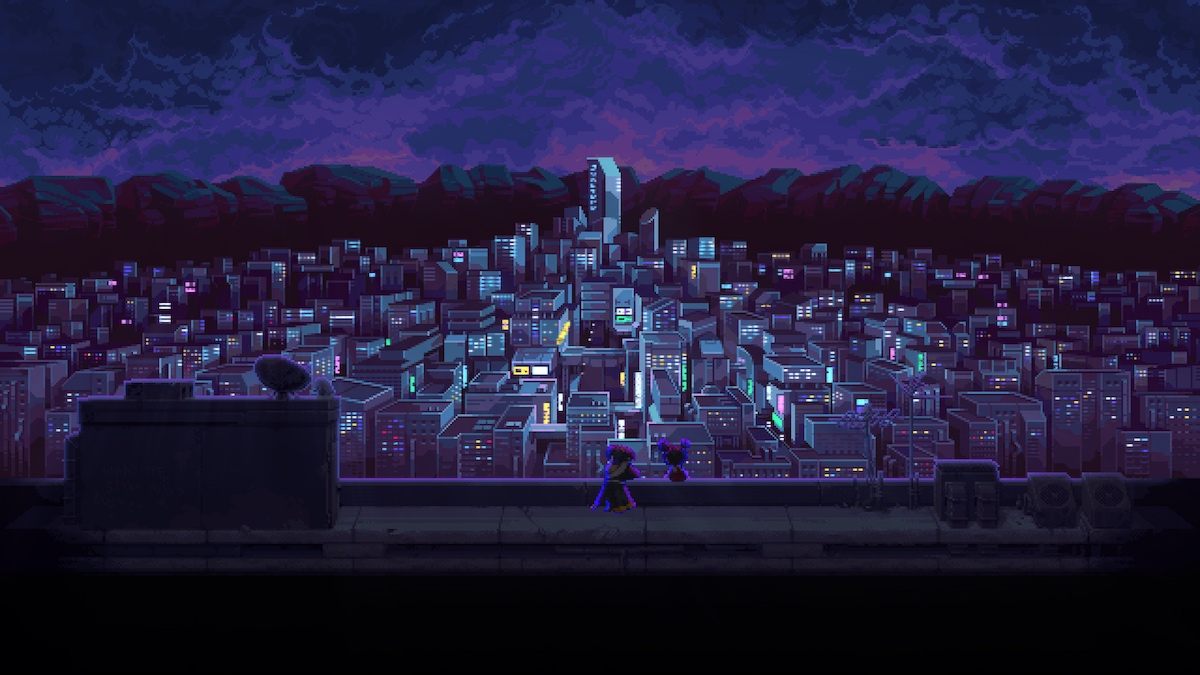 The fact that a game of this stature manages to carve out a narrative and tone that is as intriguing and as inviting as it is says a lot about Askiisoft’s skill in world-building here. Unfortunately the game’s rampant exchanging and swapping out of priorities, both inside and out the main narrative, do work against it to the point that large swathes seem either cut-short or abandoned out of aspiration for a new idea further down the road. And with a fair number of interesting mechanics and stand-alone moments that similarly evoke, but don’t quite lead into anything truly mesmerizing, Katana Zero departs with many a question but never really any answers to what a lot of it means. While one can hope we’ll see a follow-up to help tie up all its many loose ends, there’s no denying the game has plenty of solid foundation with which to build on. A satisfying streak of action-platforming madness together with some great world-building; the intentions and executions may not always come across fulfilled or impactful, but Katana Zero at least is a game that will attract on its narrative substance, as much its dynamic pixel-art style.