You wouldn’t picture being put behind the wheel of a fairly ordinary, nothing-special taxi cab, would prove sufficient enough to base an entire game around. But here we are, not one but two upcoming titles focusing on the daily escapades — contradictory that may be, to exchange confinement in one’s apartment with confinement in a moving vehicle for long stretches of time — of a cab driver. And while developer Fellow Traveller’s Neo Cab looks to be taking a more personal/character-focused direction in its cyberpunk-fueled dystopian take on a future where human taxi drivers are all but extinct, the collaboration between Monkey Moon and Black Muffin via noir-drenched Night Call is all about the mood of the game’s take on late-night Parisian life. A murder-mystery — and as such, the need to hunt down the tenacious serial killer, whom may or may not be one of the many passengers you end up driving to their destination — not exactly the most interesting premise in present times, but what Night Call lacks in originality, it makes up for in artistic design.

Even if the bold shapes, restrictive lighting and weird not-quite-50:50 split between the internal ramblings of your cab and an overview of the city in map form (which, to an extent, you have to keep a close eye on) feels at point heavily, densely smothered on-screen. An indulging in noir’s artistic ingenuity as opposed to the effect this may have on the gameplay. Gameplay which, is relatively confined to one of two things: the first, Night Call’s core, being the dialog option-based conversations you have with your passengers. A means to deduce and work out if any of these seemingly-ordinary Parisian locals, may hold the key to unmasking the killer on the loose. The second, played out in one’s apartment, where you piece together any and all intel you’ve gathered and try to come up with some form of conclusion. 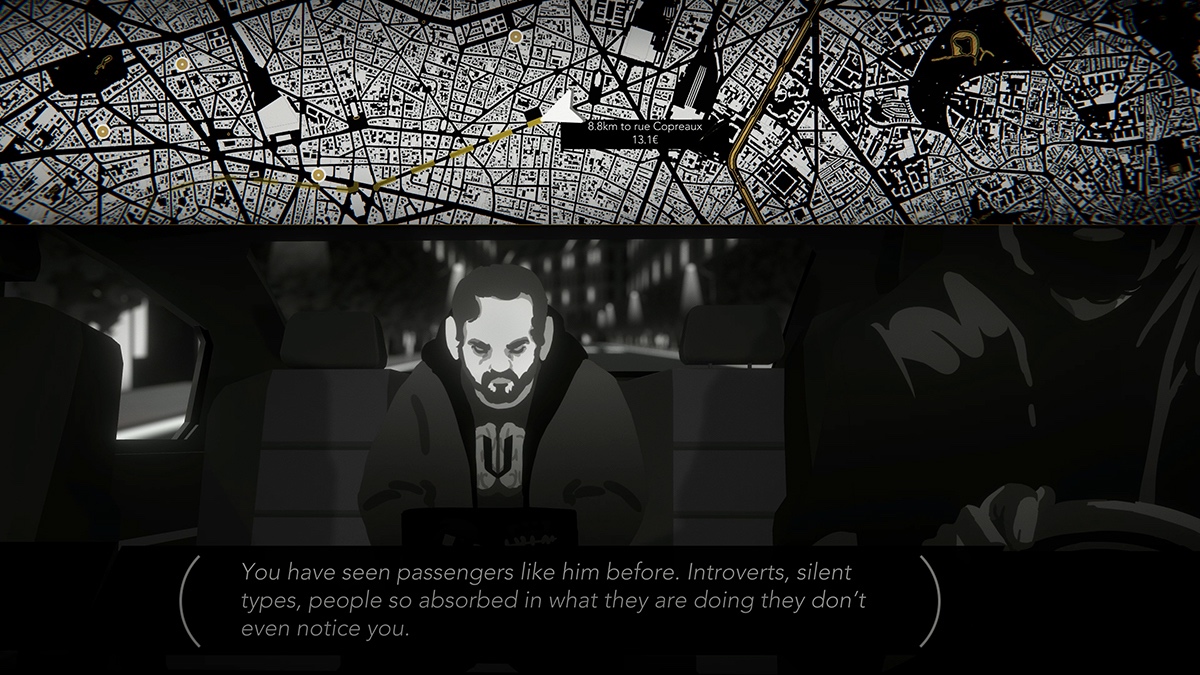 There are some nuances to the taxi-orientated components. Namely how much fuel your vehicle has — and when it might be best to refill, more importantly how this best serves your limited nightly hours as much the money currently amassed — as well as whether or not it will serve you best to focus on longer-distance routes. The latter even throwing up some potential bonuses like tips (extra money for fuel’s sake) as well as of course the increased time with which one can delve deeper into a passenger’s personal background. Providing of course, they so willingly decide to open that figurative of doors. Which, as a result, serves as the crux to Night Call’s potential as a mystery/adventure-like entrant and why at times the game often feels as if luck is playing a little too much in the general flow of things.

Players needn’t even focus on the animations that play out during one’s journey to recognize the developers’ priorities when it comes to presentation. How surroundings look and act more as props to maintain the aesthetic. There’s a generic and unfortunately filler-esque dispensing of detail here, the way repeated animations or shapes emerge outside the confines of one’s taxi — regardless of how many turns/corners/potentially notable sights one covers, the animations mostly play out in the same fashion. For a city as globally-renowned and culturally-prominent as Paris, you’d think there’d be a bit more appreciation for the detail here. And yet, regardless of who it is that asks for a ride to a certain destination — no matter if it’s one mile or ten — you’d be similarly lucky if the same three or four streams of silhouetted buildings and shapes alike don’t repeat themselves in due course. 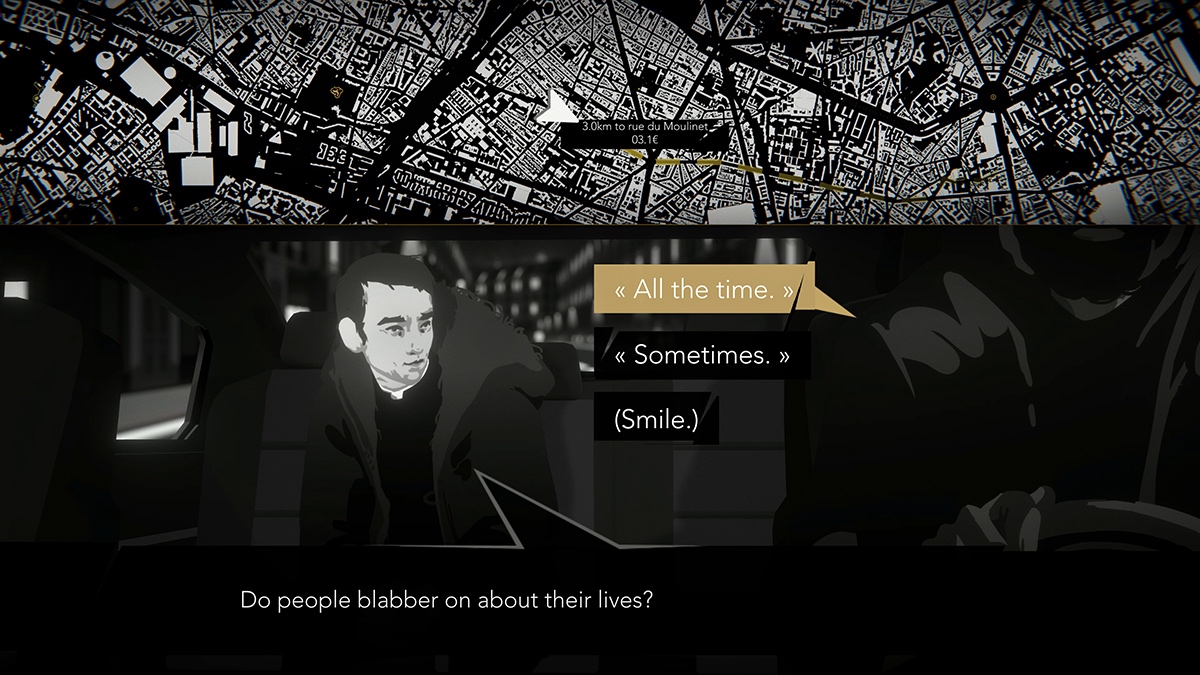 You can argue that Night Call‘s insistence that you, the driver, simply shut up and listen to what the characters want/have to express — reflective, rambling or somewhere in-between — is in a way reflective of the typical real-life scenario, at least the ideal ones. And that it gives room for these characters to better present themselves, to offer exposition possibly of the grander scenario playing out in the French capital. Maybe offer some crucial insight into any potential motives in play. But to reiterate, this design means that crucial dialog choices are never guaranteed — that it may be that your passenger simply wants to vent and that the game, rather than a dialog option, will simply revert to the player-character speaking via an internal monologue, as opposed to being that other end to what could be a pivotal passage of dialogue.

No one can knock the developers’ attention to tone and the way lighting gives the fictional affairs of Paris that touch more air of mystery about them. Particularly when the game offers up those brief passes of notable landmarks and street corners alike — a call back to the glancing moments that riding about a city taxi brings — and the chosen noir design paints the Parisian night-life as delicate but far from quaint. The murder-mystery premise is not the most imaginative route to take in one’s quest to get to a definitive solution and there’s more than a hint of this disposingly shallow presence outside the confines of one’s taxi cab when making the move from A to B. Perhaps it’s asking too much to lay out a fully-detailed, 1:1 geometry of a city like Paris while one is on route, yet the repetitive nature of one’s journey on a visual side does tend to work against what is, in actuality, a fair approach to dialog-based investigatory work here. Hopefully the variety in its NPC passengers, as well as some worthwhile dilemmas pertaining to which fares to prioritize, can help give Night Call the gameplay edge it so clearly seeks.