Funcom today announced that it would be holding a free weekend-long event on Steam for Conan Exiles and also shared news on the upcoming DLC centering on the Conan the Barbarian movie.

The developer and publisher has said that the free update will introduce two new dungeons — the Sunken City and Sepermeru Silver Mine — which will be accessible on the free ‘prolonged’ weekend from May 8 to May 12. 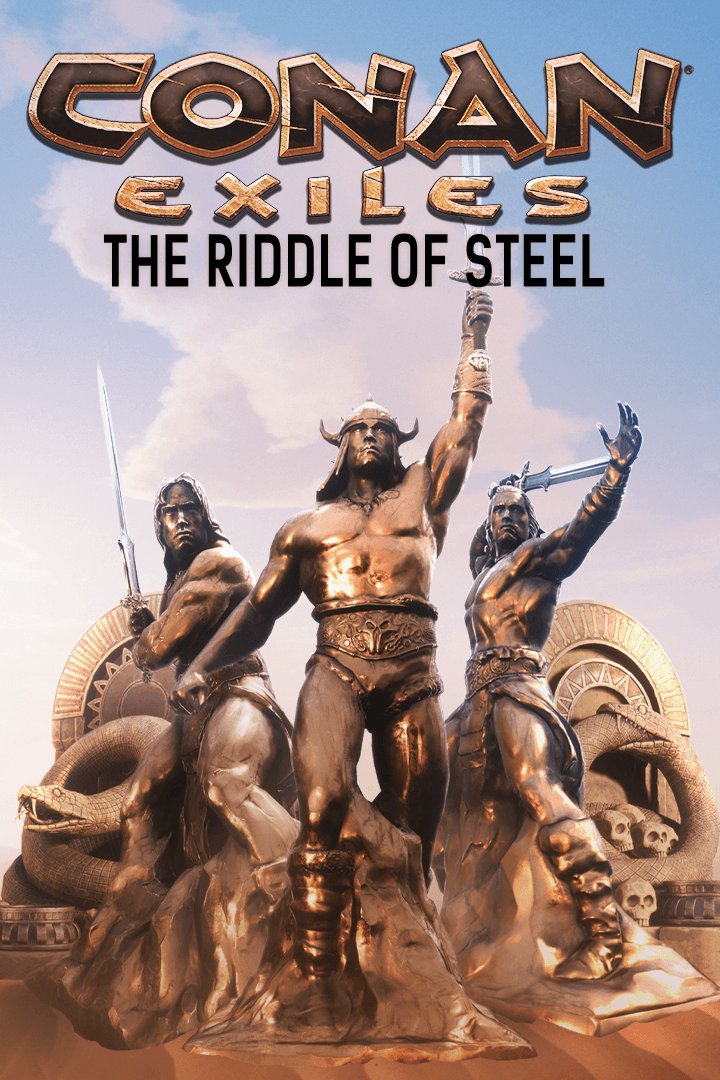 The key artwork for Conan Exiles’ upcoming Riddle of Steel DLC, which will release on PC, PlayStation 4 and Xbox One.

Players will also be able to find new items to loot and craft with, new enemies and bosses to face and explore revamped locations. There will also be a new feat in the ‘Witch Doctor,’ giving players the ability to summon wights and skeletons to help them out in battle.

Along with the free content to mark the survival action-adventure title’s one-year anniversary, Funcom plans to release its sixth piece of DLC, the Riddle of Steel, for Conan Exiles.

The latest add-on focuses on 1982’s Conan the Barbarian, which had Arnold Schwarzenegger assuming the role of Conan.

According to the developer, the DLC will have eighteen statues and figurines based around the Predator and The Terminator star’s portrayal as the iconic hero.

That’s not to mention that the Riddle of Steel will include other movie-themed content, including five helmets based on characters, five unique placeables, six statues and figurines of Valeria and three decorative warpaints.

The sixth piece of content coming to the title is “not part of the four core DLCs” that Funcom has planned for 2019, meaning that it won’t be included in the Year 2 Season Pass.

The Riddle of Steel is slated to launch first on PC later this week for $6.99, while a PlayStation 4 and Xbox One release will come “shortly after.”

“We thought we’d do something a little different for the anniversary [of Conan Exiles],” says Rui Casais, the CEO of Funcom.

“Although the game is based upon the world created by Robert E. Howard during the 1930s and the subsequent comics, the movies enjoy a huge cult following.

“Many of the Conan fans today would probably never have heard of Howard’s work if it weren’t for Schwarzenegger’s breakthrough role as Conan the Barbarian.

“We, therefore, thought it would be a good idea to combine the anniversary of our best-selling game with a homage to Schwarzenegger, Thulsa Doom actor James Earl Jones and their like.

“This makes me all the more pleased to announce the Steam free weekend, so that everyone can see what the game has evolved into for free.”

Conan Exiles was released last year for PS4, Xbox One and PC, which ended up becoming Funcom’s best- and fastest-selling title in its history.

For more on Funcom’s title, check out Hardcore Gamer’s review.