Scarface has remained one of the most revered movies from the ’80s and one of the best crime-related films of all-time. Its tale of rags to riches leading to the downfall of the man who wanted the world and everything in it is timeless in many ways. It doesn’t matter what year it is, there’s always going to be someone who wants more than he has — while others will dream of excess to have more than anyone else. For Tony Montana in Scarface, his lust for power and money led to his demise — but what if it didn’t? What if he survived the epic shootout at the end of the movie? Scarface: The World is Yours was a controversial game in its day due to it providing this kind of what if scenario.

Vivendi gave the game a ton of marketing muscle at the time and even released a limited edition version with a lot of developer interviews going over the making of the game. Upon seeing all of that content, it’s clear that they had a lot of passion for the property and they wanted to make the best game possible given the circumstances. Taking Tony from rags to riches is a core theme of both the movie and the game — it’s just done in different ways. Tony starts with nothing in the former and here, starts with everything, loses it all, and then has to hustle a bit to even begin reclaiming his fortune. This small touch allows you to get a taste of his journey to the top early on, while still giving you enough of a struggle to appreciate everything you get. 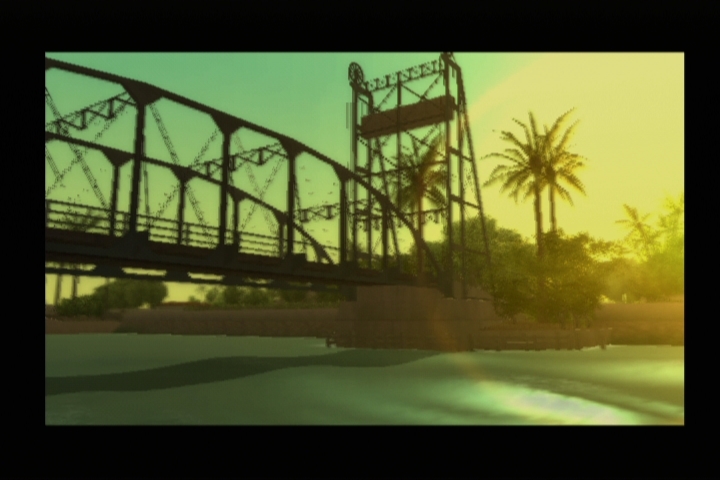 Tony has the ability to use his existing contacts to not only give him money, but open up doors for things like bank accounts that allow you to launder money. You can also buy and sell drugs with ease using the same basic meter system that the bank systems use. It’s akin to a golf swing meter where getting things in your favor requires perfect timing — so for drug deals, you will maximize your profits and with the banks, you can minimize your interest rates. The mini-game is short, but a bit annoying as the meter itself moves too quickly and you only get one shot to get it within the target zone. Failing isn’t the worst thing in the world, but it does stack the deck against you.

Fortunately, earning money via missions and other means does eventually pay off. Once you get far enough in the game, you can earn properties and earn money off of those. Then you can do things like not only afford all the cars in the world, but also cronies to help you out and even have a giant tiger available at your mansion to kill enemies. Upgrading weapons for your weapons locker also becomes a breeze and allows you to avoid have to just grab whatever you can in a mission from fallen enemies. There’s a fair amount of variety to the mission structure, with things feeling a bit more modern than they did in the GTA games of that time. The gunplay also feels more solid and user-friendly — not only holding up nicely when compared to GTA and other games like True Crime, but even to games of the modern era. 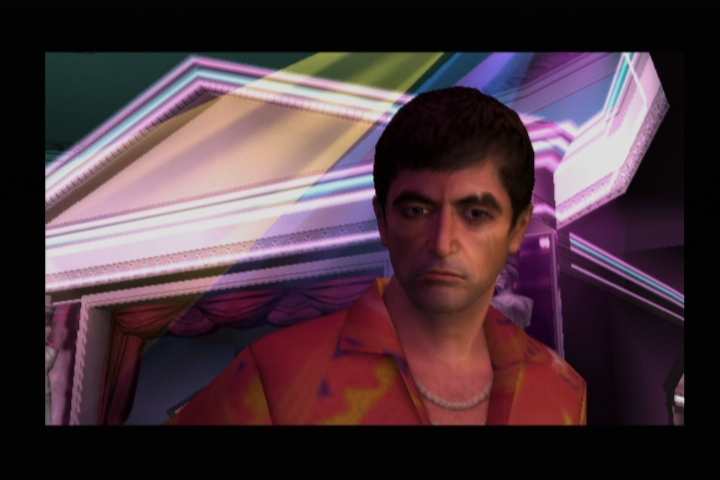 Shooting involves aiming with the left trigger and shooting with the right and feels far more natural. GTA games then tended to use face and shoulder buttons and never felt comfortable. Scarface’s shooting mechanics are fantastic and the lock-on aiming system works far better than one might expect for a thirteen year old game. An early cover system is also used and allows you to have far more player control than other games of its type. The usage of the d-pad for weapon cycling and zooming is nice and you can crouch while pressing in the left trigger as well. This comes in handy when you need to evade enemies and you can engage in a bit of hand to hand combat too, complete with a solid blocking system. Now Scarface isn’t in contention with any actual fighting games, but for an open world game, its fighting and shooting systems are robust for their time and by making things good overall, it allows the game to age nicely.

There are some elements of the game that haven’t aged well — and they aren’t what you might expect going in. While the game is set in early ’80s Miami, that setting winds up being more of a time capsule for the game than anything else. Art deco designs flood the world and cars run the gamut from sleek and stylish to gaudy, which all works with Tony’s character. What doesn’t work for the setting is all of the constant product placement for Bodog — a long-forgotten gambling site in the mid-aughts that also branched out into MMA with Bodog Fight. It’s very much a time capsule in the worst way since this relic of the past clashes terribly with the ’80s vibe the entire rest of the game has. 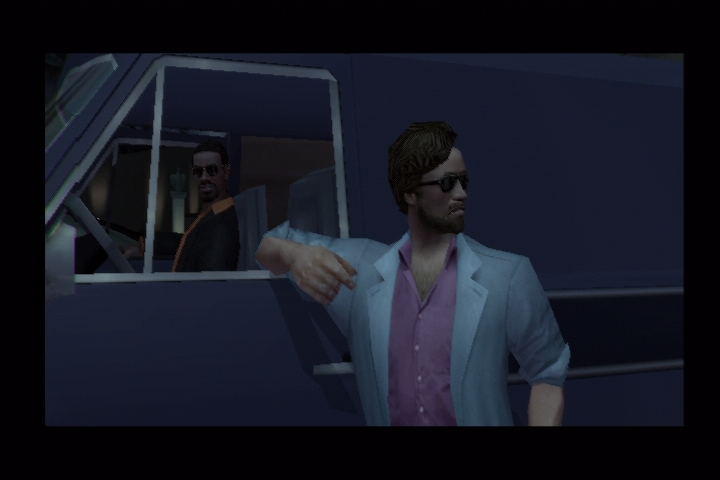 As a whole, the game controls nicely, with driving working well and leaning more towards the loose arcade side of things. When you get a super-fast car, you feel the speed — and that can be good or bad. If you’re new to the game and grab something high-end, you’ll spin out and crash. Getting something slow helps you learn the driving mechanics and that will come in handy during chases and the like. The overall car controls are easy to learn and intuitive, so needing to get away quickly during a sticky situation is doable even with the odds against you.

The World is Yours has better animation and environmental designs than most GTA-style games of its time, but does suffer from the ravages of time. Character models have especially aged poorly, with minimal hair being used to help disguise the action figure-esque plastic bodies. Lip sync is on-point and the hallmarks of the movie, like the club and Tony’s legendary mansion, look remarkable. Running and gunning animation looks solid and the cutscenes have a more cinematic flair than most from their time — in part because they’re going to replicate the feel of a movie instead of just taking great shots from a movie and replicating them. 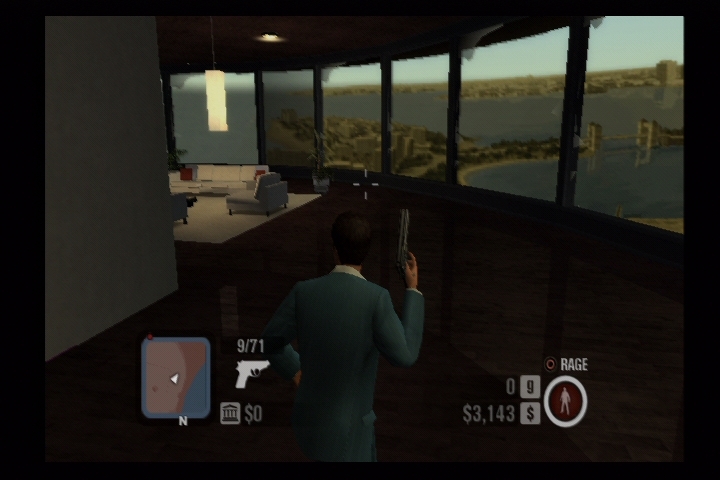 The presentation as a whole is hurt a small amount by the loss of Al Pacino in the role of Tony. His replacement does a fantastic job in his stead and mostly nails the voice and all of the small mannerisms perfectly. The secondary voice cast isn’t as good, with most characters coming off as one-note and not having any depth to them. While this isn’t the worst thing in an ’80s crime drama with a bit of cornball and overacting as part of its charm, it does hurt the overall quality a tad. The soundtrack is largely on-point though, with a ton of ’80s hits and a mix of mid-aughts stuff to replicate the time the game came out. This is goofy, but can at least be changed around to where you can pick and choose what songs to hear in the game — so it doesn’t hurt the game overall.

Scarface: The World is Yours is a fantastic open-world game that manages to do enough not only differently from GTA games of its day, but also better that it’s worth playing today. The PS2 version has a special edition with a DVD that isn’t too pricey, but the original Xbox version will set you back around $20. This isn’t all that bad though as you do get a higher-fidelity version of the game and can play it on the Xbox 360. The PC version should work on modern-day devices as it has Windows 7 support and that usually results in a smooth transition to Windows 10, and using software like Pinnacle, you can easily get controller mapping to replicate the console version. No matter how you choose to enjoy the game, it’s a blast and a ton of fun for anyone seeking some open-world thrills in an ’80s setting.