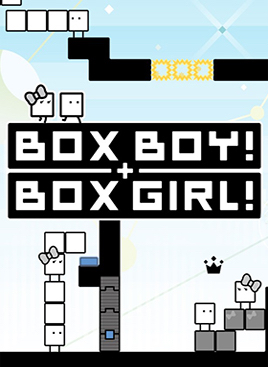 You’d be forgiven for assuming (and for a time, it was the correct assumption) we’d seen the last of BoxBoy. You’d be forgiven too for drawing a complete blank were the very name even be brought up in the first place. HAL Labratory’s minimalist little puzzle series, which spawned three entries on the 3DS, was believed to have seen its closing chapter, ByeBye BoxBoy!, play out. As it turns out, Nintendo it would appear had other plans for one of their newer mascots and creations; whether or not they considered the puzzle-platforming IP a key figure in their release schedule going into 2019 remains unknown, but as it stands, it would seem we haven’t seen the last of HAL’s miniature little white box with legs. Further to that, it would appear HAL themselves have saw fit to introduce a couple of new modes to the series’ fourth entry, BoxBoy! + BoxGirl! Modes that, in the end, lend BoxBoy’s debut on the Switch with a fair amount of worthwhile investment.

As the name might imply, co-op is BoxBoy’s most notable new addition — the titular BoxGirl taking the form of a second player — or if left still to single-player the second character with which players must control alongside BoxBoy — in completing a set number of geometric, box-based sequences of puzzles. For those new to the series in general, BoxBoy is a stripped-back, hyper-minimalist puzzle-platformer that has you complete a set number of similarly-geometric/similarly-simplified levels in bite-size “world” chunks. Levels on average usually taking around a minute or two tops to complete — some rounding off in little over than thirty seconds. The point is, BoxBoy has (and likely still is) far from renowned for its difficulty and to the most critical, BoxBoy! + BoxGirl! feels in a way symptomatic of Nintendo’s regular MO when it comes to the presence of a difficulty curve. In that the first few areas or worlds or chapters seem offensively easy to beat, with the real meat of the game’s would-be complexity and challenge only popping up come the last couple-dozen levels.

No matter the time, though, players will often be required in getting BoxBoy (and/or BoxGirl if playing co-op) to a goal using the characters’ ability to duplicate and create tetrimino-like chains of square blocks. Depending on the limitations set out on a level-by-level basis as to how many blocks one can spawn — as well as the abilities accumulated overtime up to that point — players may be able to do something as simple as spawn make-shift steps and platforms, hook onto ledges to then snake one’s way up, hop across perilous beds of spikes using blocks extended from out one’s body. The concept may seem simple and while it wouldn’t be a lie to denote it as easy-to-grasp, the surprising aspect to this series is in how varied the solutions can get. Better still, how the game expands upon this core aspect, requiring players not only to reach point X, but do so while avoiding all manner of perilous obstacles — from death-inducing plunges to obtrusive squares of electricity. 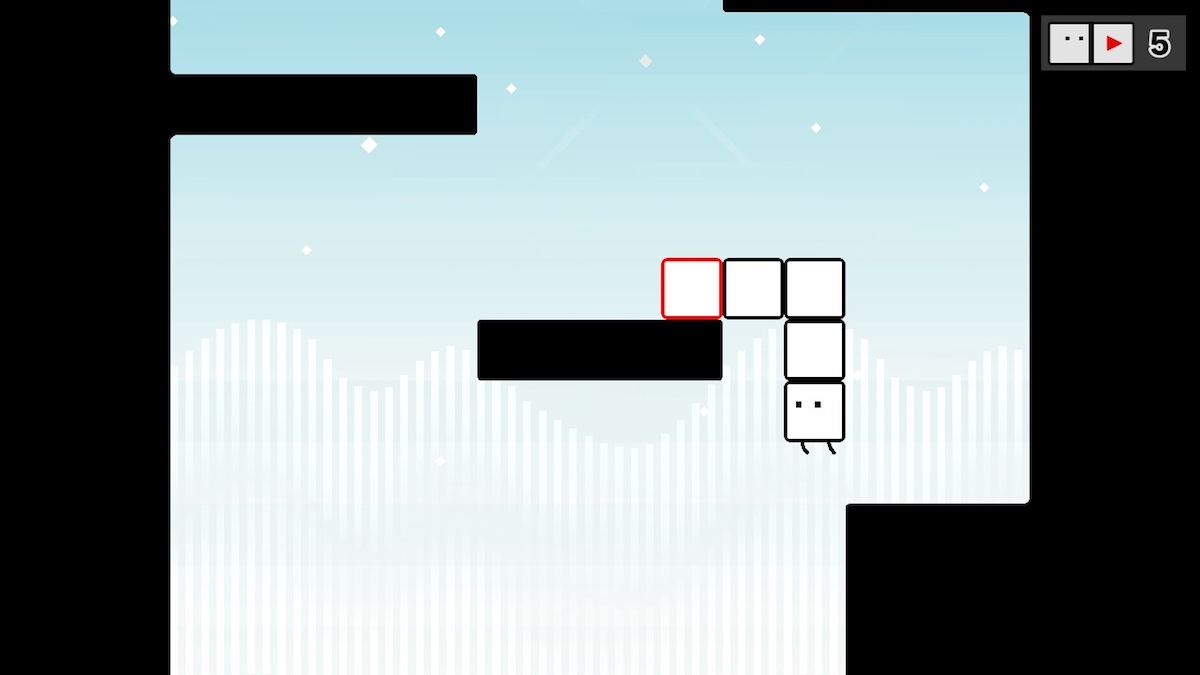 Its third mode, a campaign focusing on the more tall-bodied character, Qudy — unlocked upon completing the main story for the first time — serves more as a variation on the single-player/co-op campaign with puzzles tailored to Qudy’s more rectangular physique. The ability to flip between horizontal and vertically-aligned shapes — both in moving and similarly spawning boxes from out one’s body — working into this mode’s added conundrum on how to get to the end goal. Admittedly, the differences here are less effective than that of co-op. Part of the reason for this is that co-op, surprisingly, manages to work just as well for a lone player as it does with two players. If anything, getting through the co-op mode alone adds another degree of challenge — working out when and when not to flip control between characters. Both of which, at certain times, even allowed differing limitations on box spawning — some puzzles even requiring players to stack one character atop another. For a mode that, on surface, appears to merely replicate the experience for two players, BoxBoy! + BoxGirl! does a great job at expanding upon the series’ gameplay in new and interesting ways.

Regardless of which mode you find the most investment in, like previous entries before it, BoxBoy’s second half of its campaigns is where the real creativity and extent to which puzzles are orchestrated truly emerges. Mechanics such as zero-gravity and destructible pieces of the environment broadening the possibilities with which players must consider and think carefully about interacting with. The game is sure to induce many an unforced error or unintended move — particularly after doing everything right up to the point, only to make a basic, schoolboy error at the last second — and while not exclusive to the series’ fourth entry, BoxBoy! + BoxGirl!’s clever seductions, married together with the variance in its level design, make it a fascinating moment-to-moment entrant to invest in. 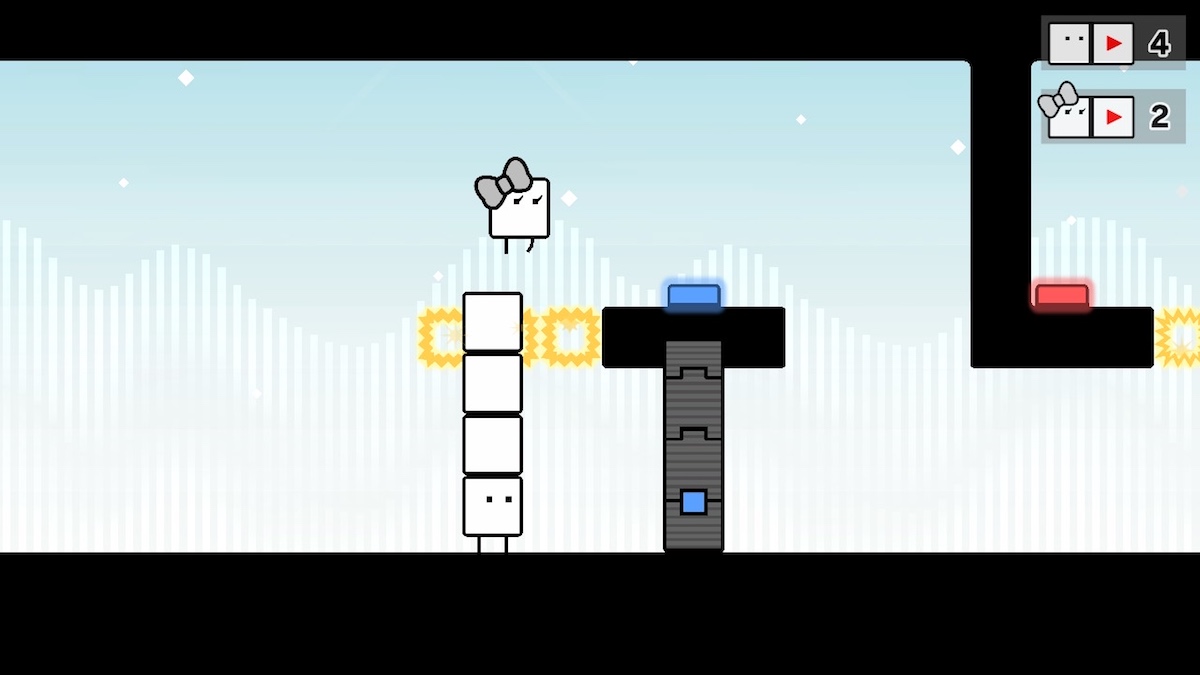 As a result, part of the charm with BoxBoy! + BoxGirl! is in discovering how these newly-acquired abilities and introduced mechanics work in tandem. Being able to push blocks across greater distances or ground-pounding them into solid ground to reach buried switches beneath. All the while recognizing not to get caught out by the seemingly visual simplicity. Even optional objectives at the goal’s end — either for claiming all crowns dotted about a level or reaching the goal using a set limited amount of boxes — become hard to ignore. The currency rewarded may not feel as valuable overall, given the only things one can spend both units of currency on are randomly-chosen cosmetic unlockables and music samples, but BoxBoy! does well at tempting players to use their resources wisely so as achieve that coveted 100% completion.

Solutions unlocked only by a fellow solution preceding it and yet offering a opportunity for players to work out if said solution can be executed with as little an expenditure of boxes. Moving platforms to reach, made possible by forming the correct shape of boxes. Lasers and electrified squares to avoid, all the while making sure that the shape you form can duck, weave and snake its way through the limited confines you’re offered. Like all logic-based conundrums or puzzles that are more about the mental arithmetic over anything else, BoxBoy! is the ideal entrant for those willing to sit down and work out the correct course to plot — the short-term longevity of its levels and the sectioned-off delivery of its worlds, an ideal format for those who may want to complete a handful of puzzles at one time, only to return once an ideal break is found. 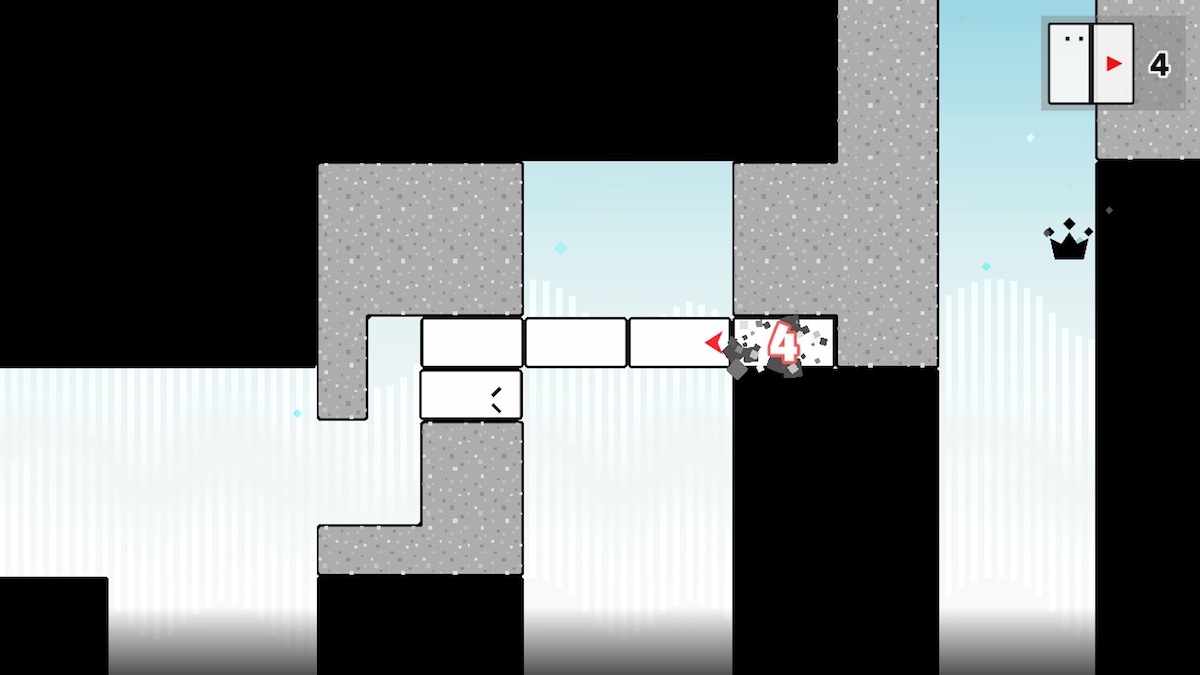 The surrounding fluff and aesthetic of its art-style or indeed its passable soundtrack may not hold much weight or indeed attraction, but where the series has never flown on its background elements, BoxBoy! + BoxGirl! undoubtedly succeeds in being an ideal puzzle game one can pick up for maybe mere minutes at a time. Not having to worry about getting to grips with the wider picture or greater assemble of mechanics upon resuming one’s quest through the game’s many-hundred puzzles across its three modes. Story, for example, again another commonplace Nintendo affair, shallow and easily dispensable at best. Controls too relatively straightforward and easy to get accustomed to, even as the game introduces new and returning abilities the farther players travel. Most actions requiring little more than the four directional buttons and a required action depending on the solution proposed.

Players may inevitably mistake the button to throw with, say, the button to detach already-spawned boxes, but in a way it unintentionally feeds back into that optional necessity (in a way at the heart of the real challenge) to find a solution with as little moves/boxes as possible. One minor criticism — one series veterans will likely notice — is that the game unfortunately does not take full advantage of all the ideas it has introduced on a series-wide level — mechanics in previous entries like ByeBye BoxBoy! surprisingly absent here. Making it seem less like a game built wholesale on its predecessors, even if there are enough new and original ideas for the compilation of levels to justify their compartmented delivery. 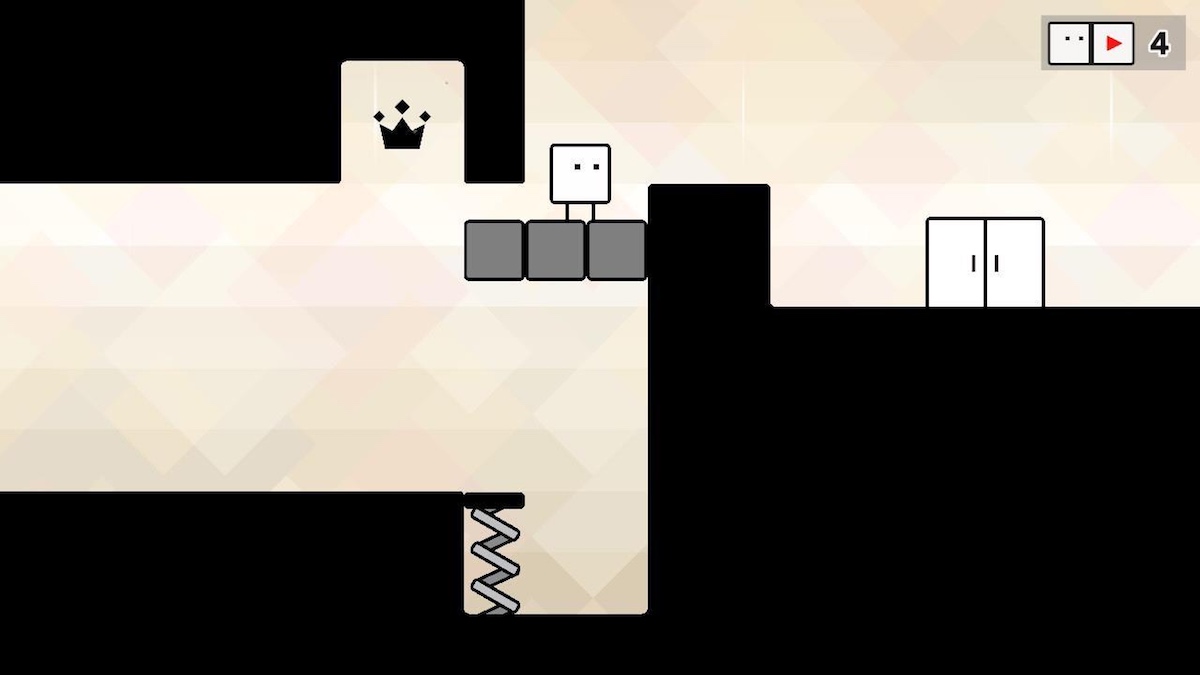 HAL Laboratory’s quadrilateral little protagonist (and co) may be dishing out the same escapades as he’s done for what is the fourth entry in the studio’s still-young puzzle-platformer series, but BoxBoy! + BoxGirl! proves the series is just as charming and as enjoyable as it’s always been. While it may be wise to note the disappointing absence of certain ideas and mechanics from other entrants, BoxBoy’s debut on Switch more than makes up for that with a similar flurry of new ideas and a justifiably-large assortment of well-crafted, bite-size levels to work out and/or return to wherever you are. But it’s thenew co-op mode — as well as the surprising ease at which solo players can still dabble in this dual-character rendition — that stands as the biggest selling point. HAL may not be so easily swayed to shake up the visual aesthetic of the series, but with a latter-half that opens up creatively as well as an easy-to-grasp control scheme, BoxBoy! + BoxGirl! in the end manages to rise above the similarities to end up a worthwhile compilation of conundrums to crack.