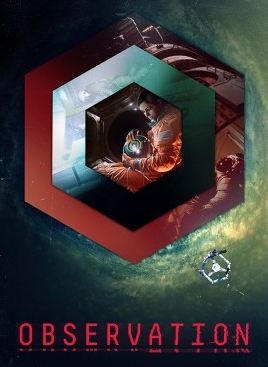 Outer space and horror have always made for some classic stories at times. After all, there’s just something about a vast void of darkness, a majority of which remains unexplored and which potentially contains various unknown dangers that naturally lends itself to haunting tales. But while several examples immediately spring to mind, one of the most notable horrors wasn’t from a work of pure horror, but rather 2001: A Space Odyssey. Between the calm yet menacing HAL 9000 and elements such as the mysterious monolith, it created several legendary and creepy bits of pop culture that have endured even to this day. And now developers No Code and Devolver Digital have teamed up again with Observation, which bears more than a few similarities to 2001. With Stories Untold, we’ve seen that No Code can tackle The Twilight Zone effectively, but how do they fare when channeling Kubrick?

Observation takes place aboard the titular space station, while one Emma Fisher is running errands with the help of the station’s AI, SAM. Suddenly, there’s a massive, mysterious incident with a lot of noise and shaking, and then the next thing you know, the Observation is orbiting Jupiter. No one knows what’s going on and the majority of the crew is now missing. How did this happen? Well, SAM thinks he brought them there. The only problem is that they have no idea why they did it. All they have is two words: BRING HER. So now, playing as SAM, you have to assist Emma in figuring out what happened.

Having to play the HAL 9000 role during a freak outer space encounter is a terrific hook for a story that’s equal parts sci-fi, horror and mystery, and Observation does a standout job juggling all of those elements. Things quickly pick up once more…let’s say, abnormal stuff appears (yes, it’s another case where it’s difficult to discuss things without spoilers), but even before then, tension is built up quite nicely. A lot of the beginning is mainly spent repairing various parts of the Observation in order to keep things stable and access the rest of the ship. But given the gravity of the situation and the threat posed by even one malfunction, it works to establish the workings of the station, as well as the eerie mood and atmosphere. 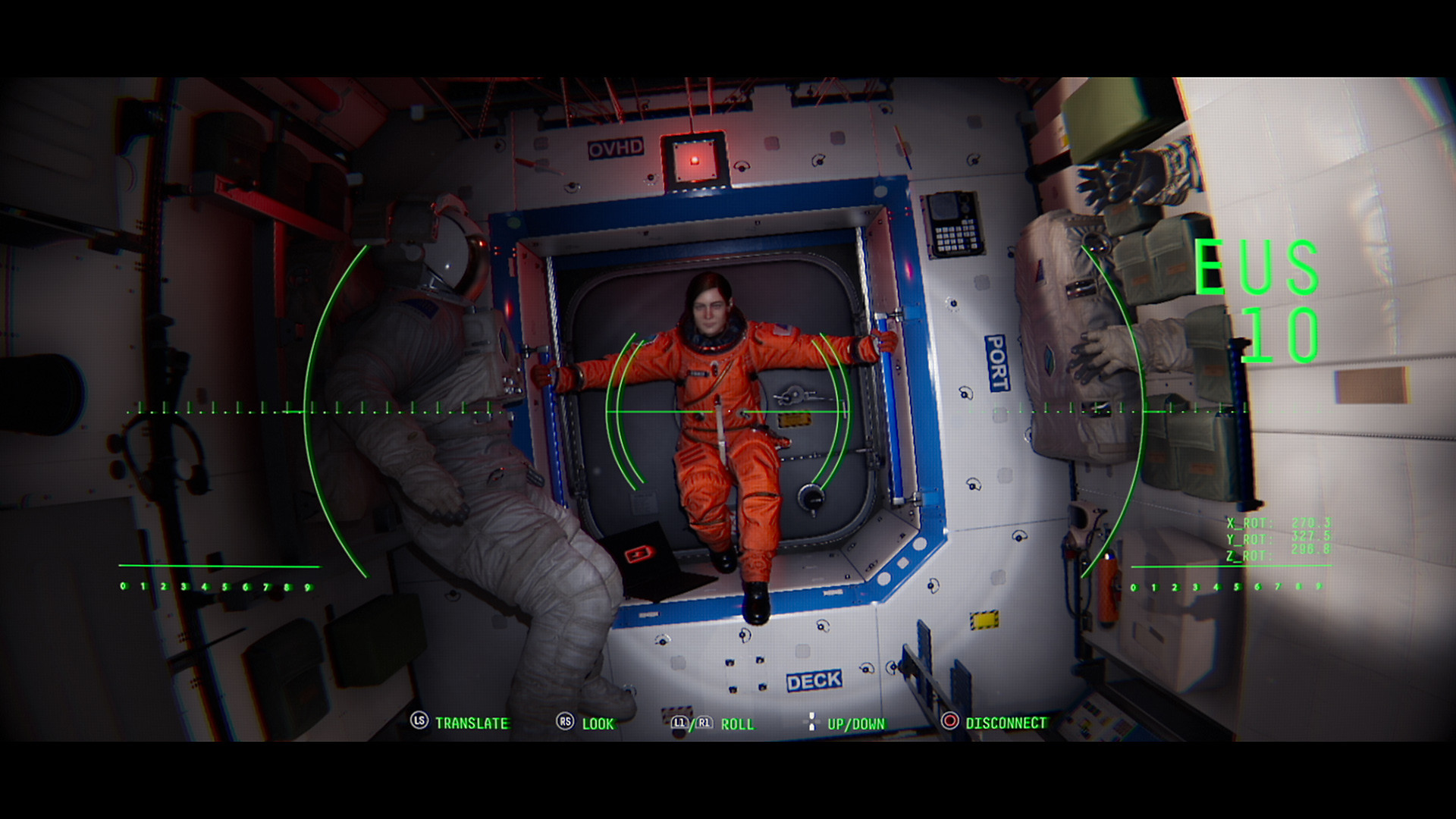 Observation can come off as a bit of a slow burn because of this, though. A lot of the beginning may feel like following simple chores to some, as SAM uses cameras to access various terminals, laptops and such in order to run the correct programs. Then again, Stories Untold had you operating low-tech mechanisms and following orders for virtually most of the game and it worked perfectly fine as device for getting its story across. The same goes here, it’s just that in comparison, players have to move around more now in order to get between objectives and plot points. But those who have patience will be rewarded with quite a few twists and intriguing moments.

Mind you, it isn’t necessarily a perfect story. There’s one particular twist that becomes blatantly obvious the moment you begin to travel to a certain location, but it takes Emma quite a while to catch on, even when stating the obvious. The ending section also drags itself out for a bit longer than needed. All the major obstacles have been taken care of, but you’re still required to operate a few terminals before the true finale. It’s an impressive finale, but it’s just that a few parts before it feel unnecessary. Still, it hits the high notes everywhere else. Without giving away anything, one of the most suspenseful and effective bits of horror comes from the unlikeliest of sources near the end as well, perfectly highlighting how threatening everything around you has suddenly become and how weak you suddenly are against all of this.

It helps that Emma is a likeable character as well and one you want to see succeed when faced with this kind of insanity. Her most effective moments come when trying to regain composure in spite of everything around her and the calmer moments she gets as a contrast. There’s a bit of Gravity in this presentation, highlighting the drama of one woman trying to their best in a situation this seemingly hopeless, and it works nicely. The rest of the characters do have most of their personalities fleshed out through audio logs and documents to uncover, but they’re still an effective lot as well. 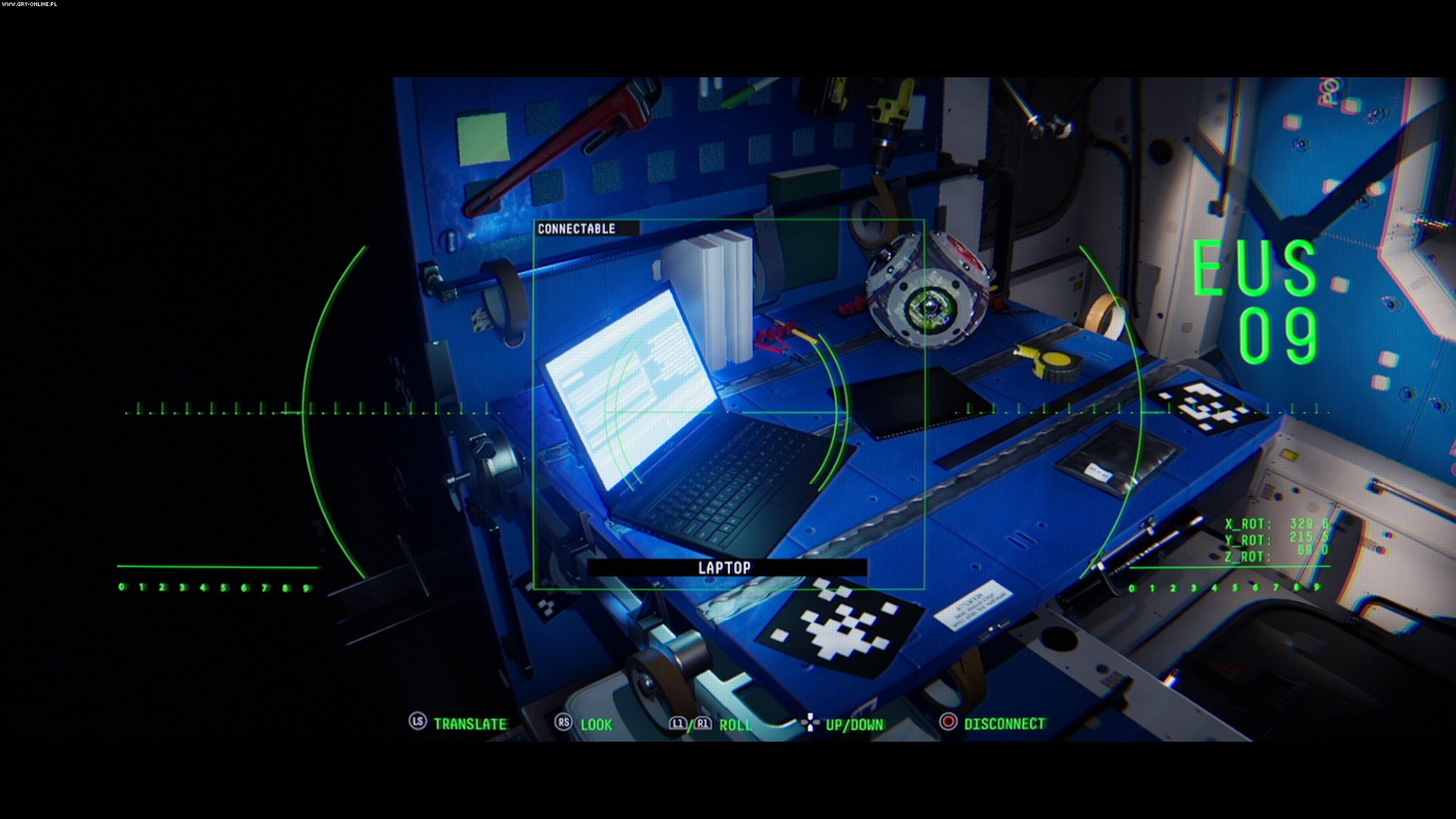 Gameplay-wise, Observation arguably isn’t deep, but it is effective. As mentioned before, a lot of the gameplay tends to consist of simple puzzles built around operating the station’s various mechanisms. Sometimes things get a bit more complicated, such as having to gather multiple parts of various schematics in order to get the patterns needed to operate certain parts. But for the most part, things are linear, just requiring you to properly input what’s needed. There are a few timed puzzles to spice things up, but nothing hair-pulling. Things are linear for the most part, but there are moments where you get to poke around for more logs to uncover and things to interact with.

As for getting around, it might be tempting to take one look at the screenshots and think Five Nights at Freddy’s IN SPAAAAAAAACE, but no, it gets more complex quickly. For one, each room has multiple camera angles to work with, meaning you to properly scan for anything that might be obscured and it all controls nicely. Things get trickier once SAM gets a mobile body, though, allowing players to freely roam about the ship. Flying can be a bit tricky at first, if only because it can become easy to become disoriented after flying around in three dimensions (it may not be for those with weak stomachs), but it becomes easier.

Bumping around too much, though, will cause some sudden light static for SAM. Actually, there seems to be a bit of a low-tech feel throughout Observation. Most of the displays you encounter, along with SAM’s menus, have a bit of a 1980s computer feel to it. Then again, when dealing with a piece of equipment like a space station, you’re going to want practicality over presentation, so it actually works in creating more of a “hard sci-fi” presentation. The graphics in general are impressive, with a lot of work clearly put into creating the feel of a realistic space station and making great use of creepy lighting (or lack of) when needed. The score also highlights the creep factor even further, truly establishing just how bizarre even the slightest issue can be in this kind of situation. 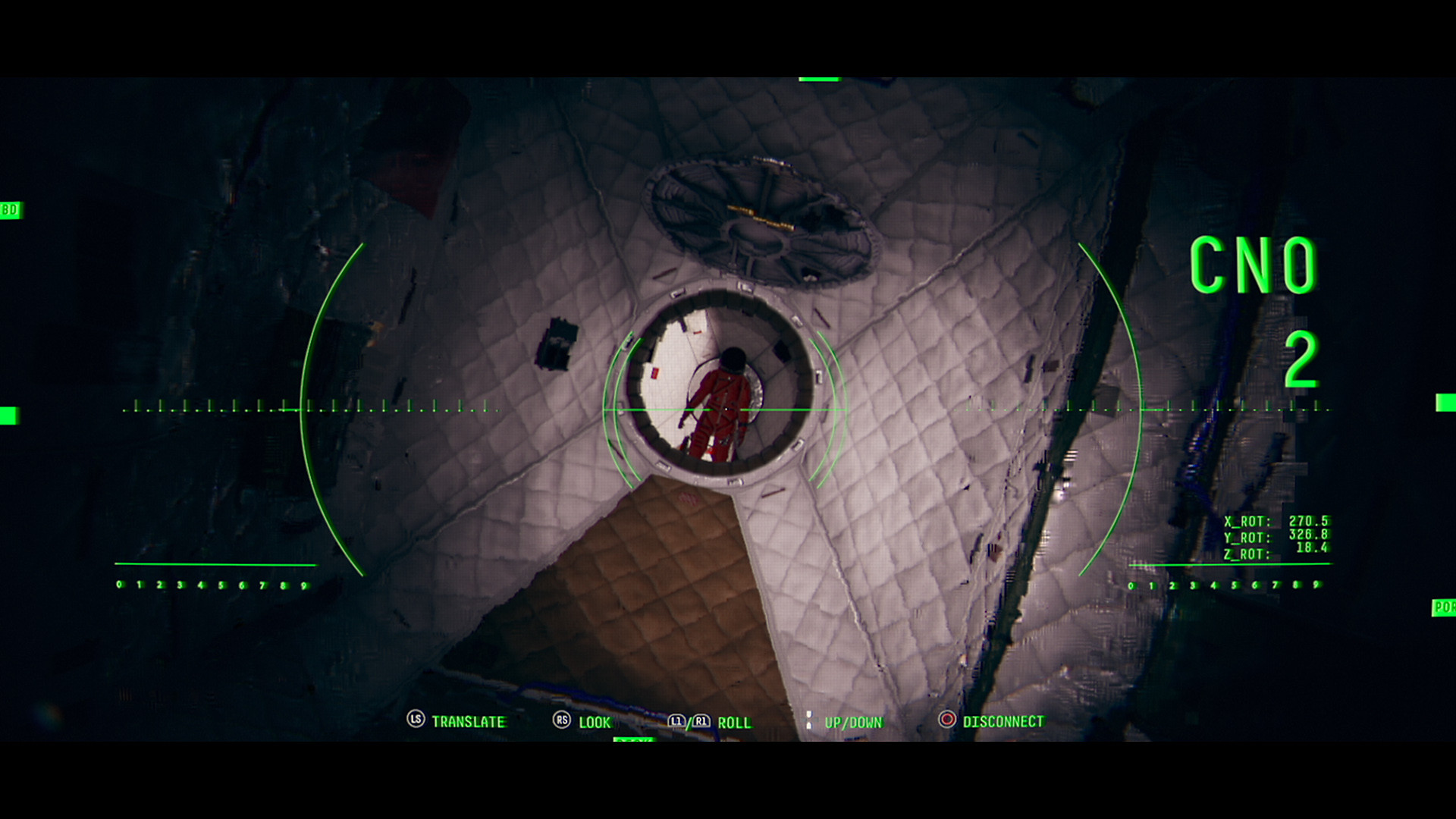 If there is one notable flaw in Observation that keeps it from achieving true greatness, though, it’s that while the central gimmick of playing as the AI is a great one, it actually feels like the game simply doesn’t do enough with it at times. For one, there are a few cinematics where things seem to break away from SAM’s POV (or at least suddenly have the HUD disappear), which does sort of break the illusion. It’s a minor issue, but a notable one, even if I understand the practicality behind it.

But the greater issue with SAM is that the game rarely gives them the opportunity to go off script. You would think that one of the selling points for playing as an AI such as this is that you can analyze everything you look at and discuss it with Emma, report on your findings. But no, pretty much the only things you can discuss with Emma are things related to your current objective. I know, realistically, it wouldn’t make sense for an AI program to suddenly start talking about a random crew bed they saw. But it means that despite being a central part of the game’s mystery, SAM can be a bit of a flat character. And considering that he’s the player character, that harms him a bit.

There’s one moment where you can have SAM respond over seeing a plushie version of the Observation, seemingly not aware of what a doll actually is, only seeing a small version of himself. Emma then lightly jokes back that there are a lot of SAMs out there on other stations. It’s a cute moment that gives SAM some personality and showcases the relationship between him and Emma, but I wish that the game had more moments like these. In fairness, I ended the game with more than a few documents undiscovered, so maybe I did miss other moments similar to this. Still, while it may seem odd to expect casual banter in a game such as this, it would have helped. 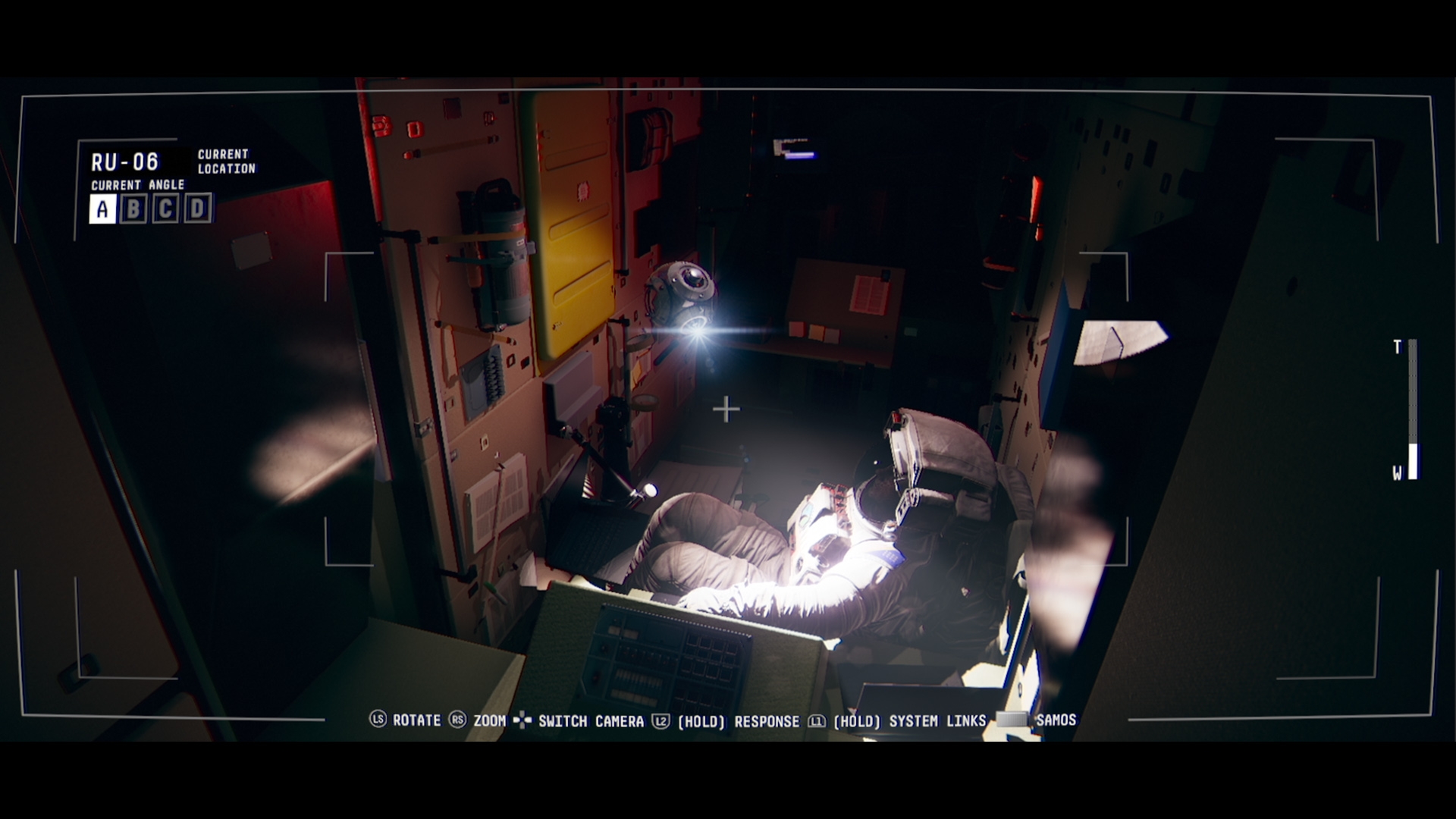 While it could have done more with its central concept, Observation is a terrific, thrilling adventure game and a superb follow-up for No Code. The blend of the realistic workings of space exploration along with more bizarre elements is perfectly executed and creates an engrossing story with a haunting atmosphere that you’ll want to see through. It’s an epic mystery you’ll want to experience, and while it may not be the full-on video game equivalent of 2001, it’s still a killer ode that Kubrick would hopefully be proud of.