Although each console developer will always make their own gear to fit consumer needs right out the gate, it’s always nice to have different options they might not come up with. Ematic has been responsible for a variety of third-party gear for PC and consoles. This time we had the opportunity to take a look at their protective carrying case and the wireless controller they’ve made specifically in mind for Nintendo Switch to see if they hold up well in use and if they’re worth picking up against the officially-licensed goods.

Perhaps one of the biggest selling points of the Switch is that it’s an amazingly simple portable console. Pick it up, sleep mode or not, and take it anywhere to play. It’s not a good idea to just shove it in a bag on the go, however, as this can lead to damaged joysticks and a scratched screen. Ematic’s protective case is lightweight and simple in design, but nice and small for easy portability. It comes included with a detachable strap, cleaning cloth and screen protector. Upon opening up the protective outer shell, the inside houses a flap that doubles as an inner screen protector in addition to being able to hold eight Switch cartridges. There’s also a nice pocket for holding a few accessories, such as Joy-Con straps, to carry around. Inserting the Switch is easy enough by maneuvering it between two elastic straps, but taking it back out can feel a bit clumsy and the straps are so thin that it feels like they might accidentally snap. It would be nice if the Switch was held in with a slightly more durable strap that wasn’t elastic based, but overall the carrying case is as straightforward as it can get and holds the Switch snug in place while on the move. 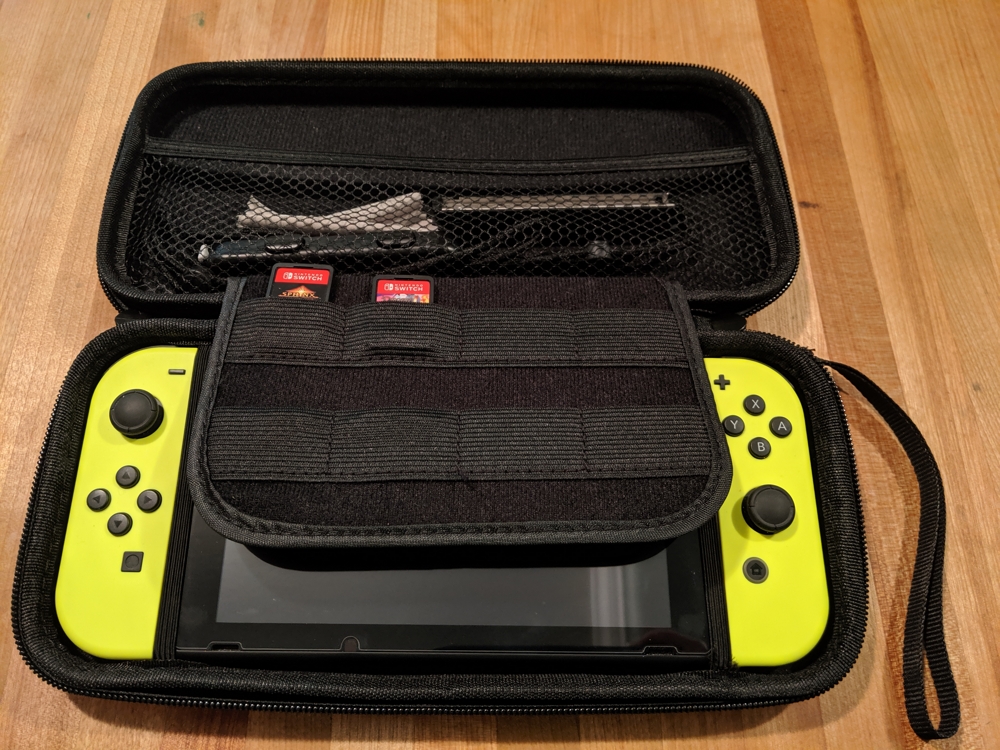 Nintendo’s Switch pro controller is one of the cleanest and most comfortable controllers ever made. Unfortunately it comes with a steep $70 price tag which isn’t economical for everyone, especially those with friends or family wanting to play together. Fortunately Ematic has made their own iteration of a wireless Switch controller, and although it might not be as tech heavy as the Switch’s pro, it does the job extremely well. This controller comes with its own charger and a simple instruction booklet on how to connect which is simple and straightforward. The general control scheme is more akin to a PlayStation controller with both joysticks centered at the bottom. It has all the Switch necessities; a screenshot, home, plus and minus buttons that function just as well as one would hope. Size wise it matches up with Nintendo’s pro and is significantly lighter in weight. The texture is a wonderful rubber matte that makes it easy to grip, although it will leave marks from sweat or grease but is equally easy to clean.

The one thing that immediately stood out about this controller is that the joysticks are a little bit taller than the Switch pro. This might not be immediately noticeable to someone with larger hands, but it took a little bit of playing around to get used to the difference. The triggers feel great to use, whereas the bumpers feel more clicky and might seem hard to use in quick succession, but they’ve held up well with tested games and repeated use. The d-pad can at first feel a bit loose and a bit inaccurate because of it, but is actually solid and great with anything from menu navigation to a an old school precision platformer. The home button is the only one that feels a little bit misplaced between the two joysticks, but fortunately isn’t one that comes up that much unless switching titles. The Ematic controller also has one extra button not found on any of Nintendo’s and that is the T button, otherwise known as the turbo function. 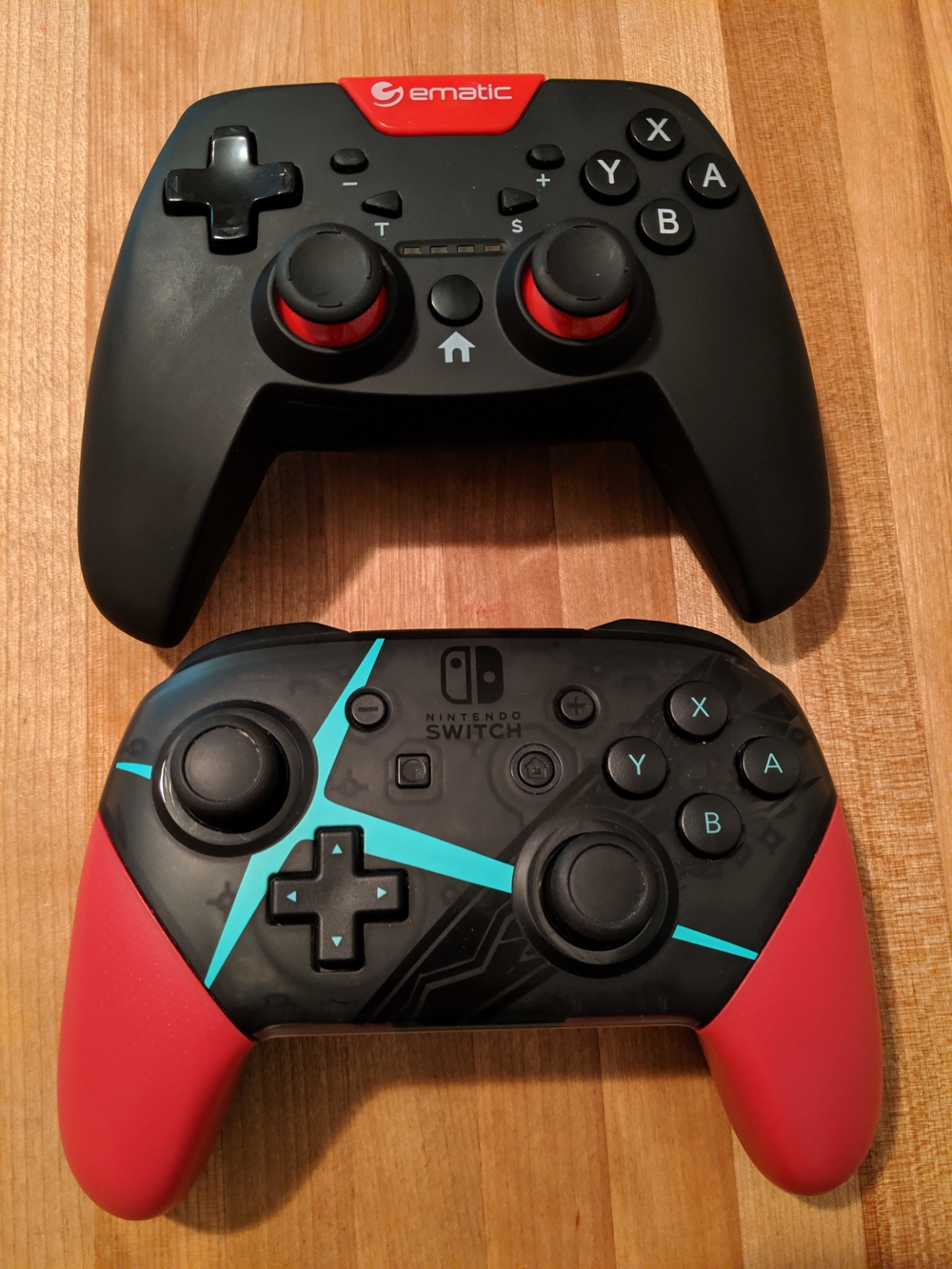 The turbo button is the one unique gimmick of the Ematic controller. Like one would think, this allows a turbo function of any desired face button to be activated while it’s held down. The downside is that the box itself doesn’t come with instructions on how to use it, but it’s fortunately easy once figured out. In order to turn on turbo, the T button is held down and then the face button of choice is pressed. After that pressing the T button again turns it off. Figuring out which games it’s compatible with is trial and error, but it works well especially with some of the old shooter NES games available.

When in use, the controller has a simple green light letting the player know who they are. For better or worse depending on the player, after being left alone for around three to five minutes the controller will automatically turn itself off. Fortunately it’s easy to turn back on at a moment’s notice by simply holding down the home button, but it would be nice if this feature could be disabled. The battery life doesn’t seem to be quite on par with the Switch Pro’s insane strength of upwards of eighty hours, but fully charged it has more than enough juice to last a good few play sessions. The controller also includes rumble functionality for those who enjoy the extra immersion. 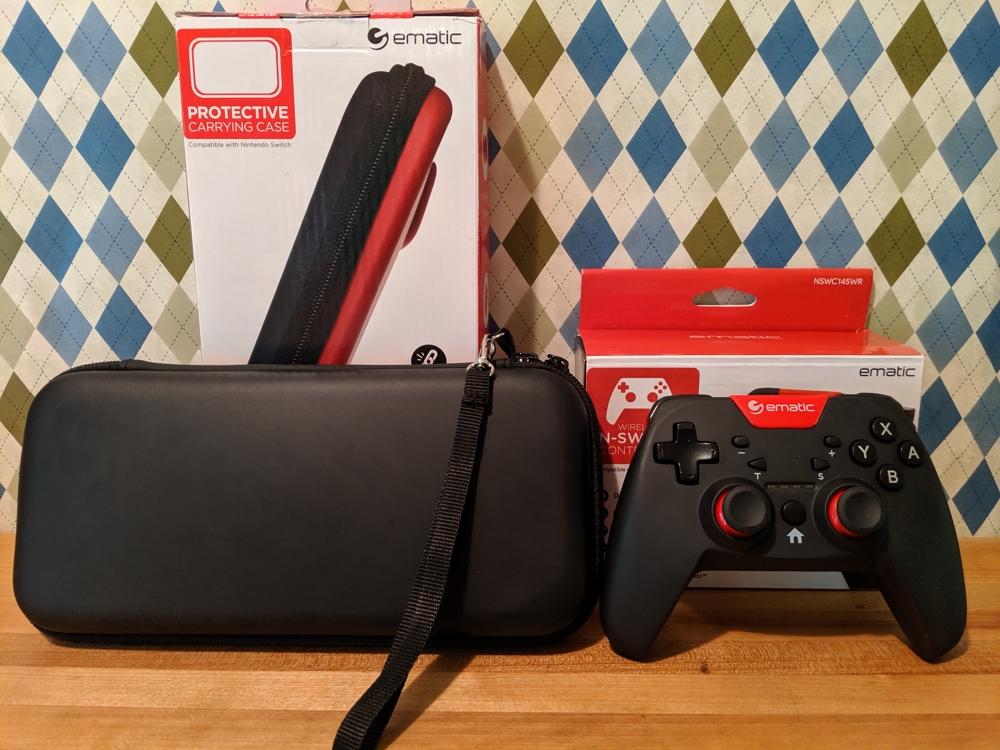 Overall the protective carrying case is a nice, slim way to pack the Switch up, but has the potential to run into trouble with frequent use of its thin elastic bands, especially with it being a bit awkward to remove the Switch from. The wireless controller, on the other hand, feels like a great choice for anyone who wants to pick up another option for player two. The overall look is sleek and comfortable to hold, and although some button or joystick differences may take a minute to get used to, it works well and is responsive for its simple approach. The Ematic wireless Switch controller is worth picking up for those looking for an alternative to Nintendo’s first-party option, or anyone just looking for the more familiar PlayStation joystick scheme for switching back and fourth for all their gaming needs.