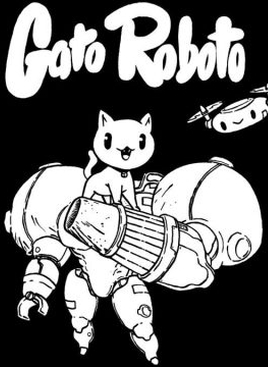 Leading up to the release of Gato Roboto, we’ve joked that simply allowing you to play as a cat inside a mechanical suit is reason enough to check out the game. And yes, we are indeed suckers for fun, insane concepts such as that. But the drawback to jokes/excitement such as this is that you begin to worry if the game may not have more beyond its concept. Sure, we can be eternally grateful to Doinksoft and Devolver for giving us a playable cat inside a mechanical suit (especially since Kaplan still owes us one jetpack cat), but did they still deliver a quality metroidvania game with it? Well, let’s find out…

The game is kicked off when Gary, a space captain, receives a distress signal from a seemingly abandoned facility on another planet during one of his routes. Before he can properly respond to it, however, his trusted cat Kiki accidentally steps on the controls. So Gary crash lands in the facility anyway, pinned in the cockpit and unable to leave. With no choice remaining, he sends Kiki out as a scout to see what’s going on and look for help. Then Kiki comes across a mech suit, and the real fun begins. Of course, there’s more than meets the eye here, and certain terminals and foes Kiki encounters begin to reveal more about what happened.

It’s a simple story, but one that works effectively and has its moments of intrigue if you hunt for them. Unsurprisingly, this story also has a few touches of well-done humor as well, also nicely using its visual charm. Every enemy and character is drawn with a nifty cartoonish style that gives them personality, which you can still make out over the monochrome graphics. The black and white display is a cool and striking aesthetic as well that fits the setting, though you can also unlock new palettes to play with if you’re good enough. The music is also tops, providing perfect retro themes for a journey throughout an abandoned alien area. 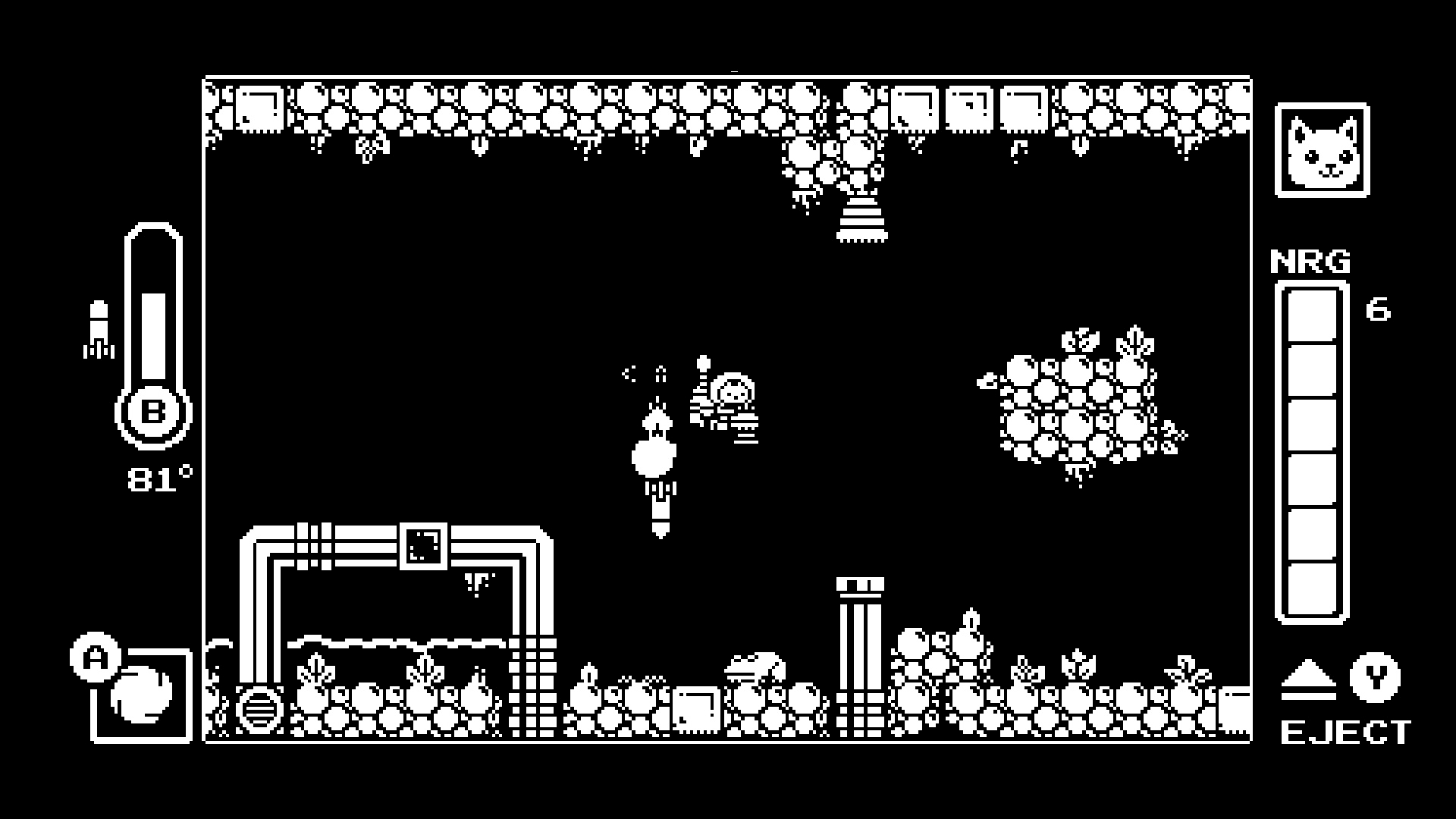 Gameplay-wise, though, talking about Gato Roboto can be difficult. Not because of flaws or complexities, though. No, rather because it falls under the category of “simple yet highly fun,” where its old-school action doesn’t provide much for discussion. If you’ve played any metroidvania game, things will come easy almost immediately. Jump, shoot, unlock the missiles to blow away certain walls, the spin jump to reach higher places, the dash to avoid certain obstacles, etc. But it’s all executed incredibly well and controls perfectly, and does indeed expertly channel the old-school gameplay spirit.

Gato Roboto does have a few unique tricks, though. The main use being the use of its central concept of Kiki and their mech suit. You can press a button to have Kiki leave the suit in order to explore new areas or when it’s required. Because while Kiki can only take one hit, that also have the ability to climb walls, fit in narrow spaces and swim (the mech suit apparently not being waterproof for some reason). So it creates a bit of a welcome gameplay change that shakes things up at times, especially when Kiki gets their hands on submarines and cannons, which are fun to play with, unsurprisingly. 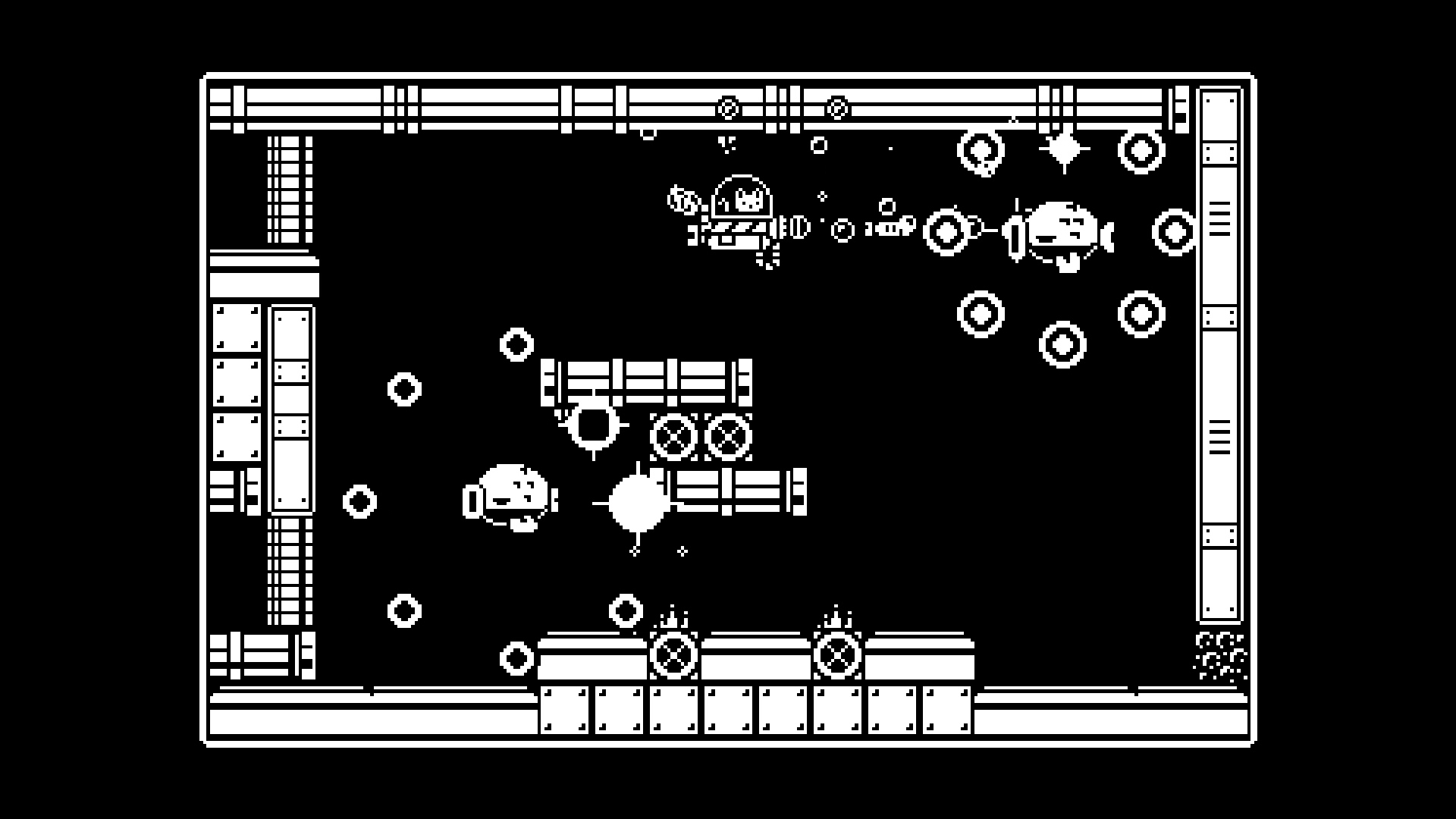 One notable touch that also contributes to the challenge is the way it handles health. The only way to regain any is at save points, with no energy tanks of any kind to give you a boost during combat. The only other way to regain health is when it automatically refills after boss battles, which are impressive. They put up quite a fight as they advance, typically requiring you to adapt to any patterns quickly. Heck, even the regular enemies can get surprisingly tricky at times, with a few gimmicks that require you to know when to use a few well-aimed missiles. Again, it’s a nice old-school challenge with just the right level of difficulty.

In the end, though, Gato Roboto does have one huge flaw that prevents it from achieving its full potential: its length. My own playthrough clocked in at just over three hours and that’s with seventy-eight percent completion. So depending on your skills, you’re likely only looking at four to five hours if aiming for one hundred percent. Though on that note, you annoyingly can’t seem to continue the game after beating it. You get a small playable epilogue, but that’s it. Meaning if you did miss anything on your first go around, well, sorry, but you’ll have to start a new game. 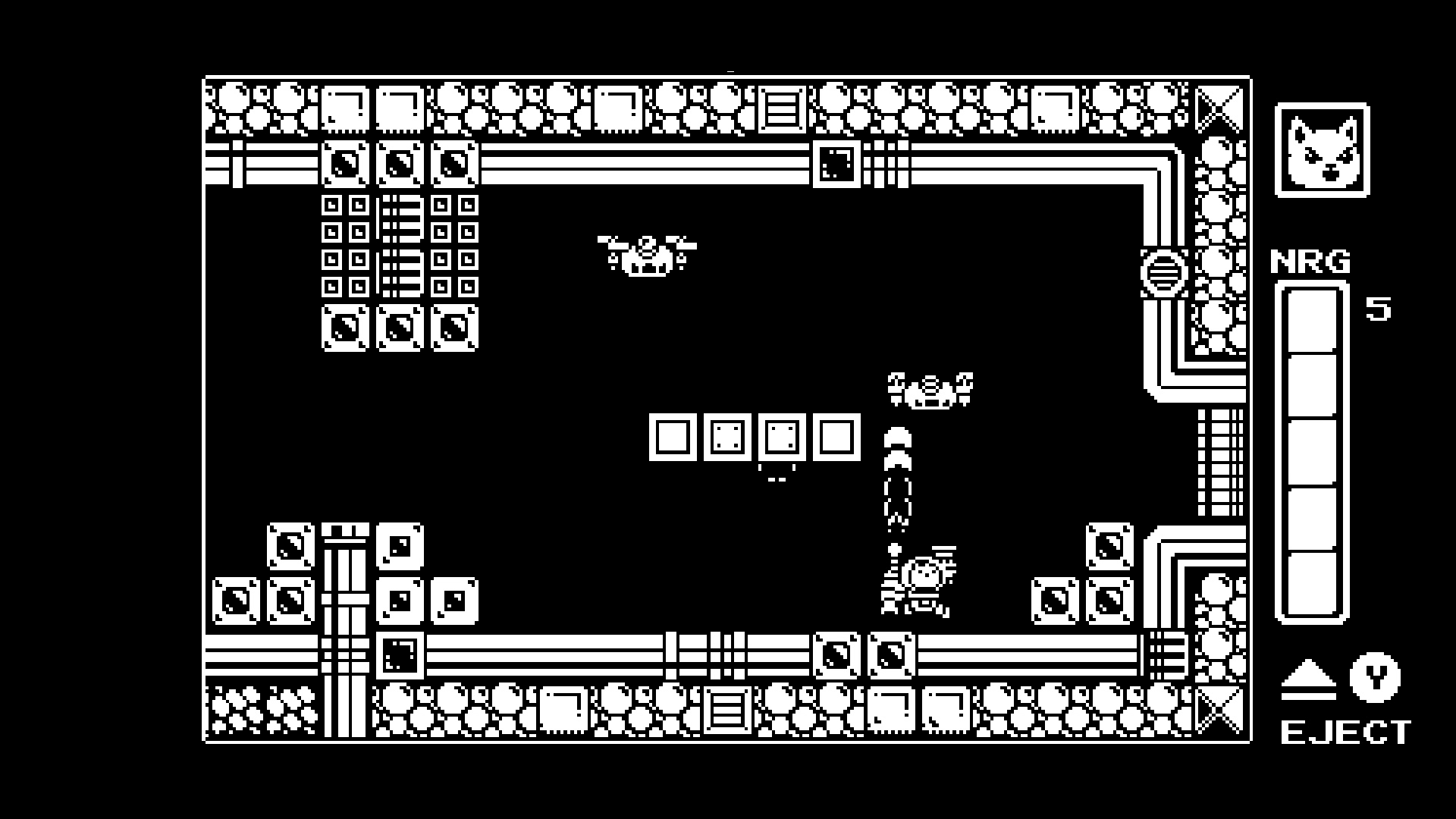 Mind you, as I’ve stated before in other reviews, there’s nothing wrong with a short experience if executed well. But what contributes to this short length is that Gato Roboto is surprisingly linear for a metroidvania game. Sure, there are hidden health upgrades and cassettes to find to gain new palettes and to trade in for upgrades (of which there are only two), but the majority of them never seem to be that far off the beaten path. After clearing the initial section, the game drops you off in a hub and says you need to reactivate three different services from three different areas to advance. So do you choose which one to go to? No, you go to them one at a time. There’s never any challenge in figuring out where to go next, unlike its peers.

The low point of this is the final section of the game, which ditches any detours or hidden secrets in favor of straightforward combat and platforming. Complete with a Double Dragon-style elevator section, even. And this makes up at least a good fifth of the game. Again, it’s still fun, well-crafted action, but I couldn’t help but feel at times like Gato Roboto would have been better off as a more straightforward action platformer in the vein of Mega Man instead. True, expecting the next Axiom Verge may have been a pipe dream, but this is still a game that could have benefited from a little more depth. 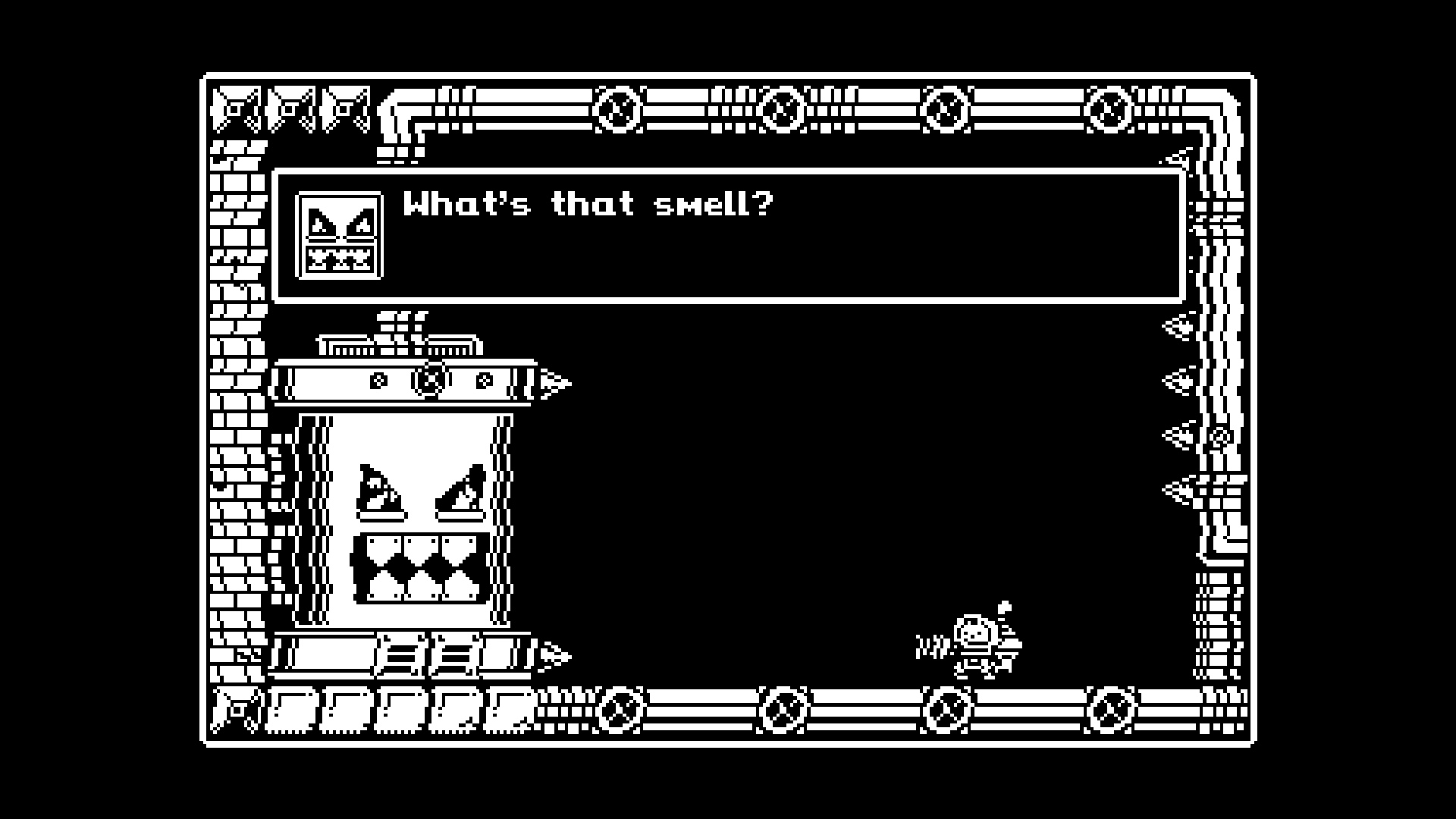 While Gato Roboto could stand to be a more fleshed-out metroidvania game, it’s still a highly enjoyable action game overall. Kiki’s adventure is one chock full of classic NES-era action, nicely challenging combat, fun gameplay and charming visuals. It’s a short burst of action, but one you won’t forget anytime soon. So thankfully, there is more to the game to love beyond just a cat inside a mechanical suit. But come on, can you really resist Kiki’s kickass cuteness?