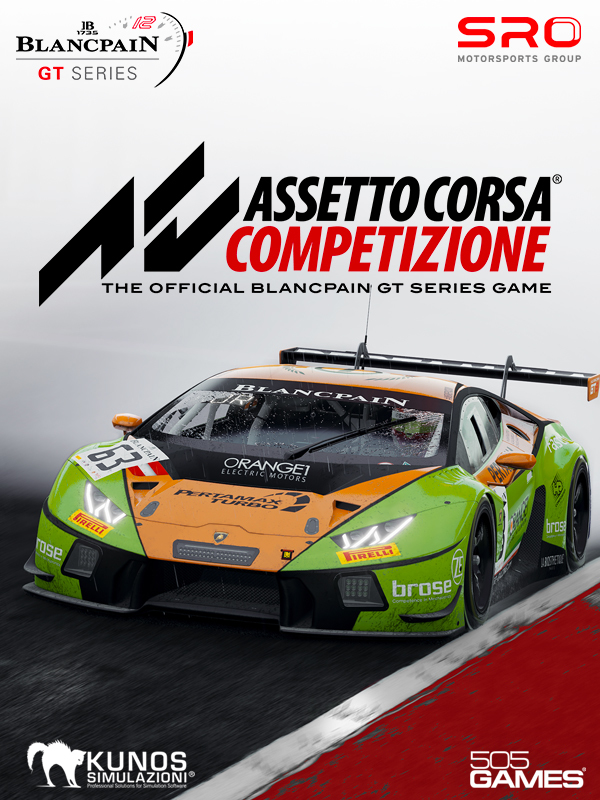 Racing simulation players are a demanding fan base as the players expect the closest thing to a realistic race as possible. The team at KUNOS Simulazioni put a ton of engineering effort into the original Assetto Corsa that was later backed by its community with mods to bring what might be the ultimate driving experience to players. A second release, Assetto Corsa Competizione, was announced and the game went through a beta phase until its official release on May 29. The official release brought some major changes as the game gets bumped to the Unreal Engine 4. While the team accomplished the racing aspect for Competizione, did they accomplish the gaming aspect?

There’s no question that Competizione is about the driving. The game ups the handling model to nail its car physics down. Each car feels uniquely different in terms of handling and players will quickly know which cars suit them the best. Players will need to not only monitor their tyre temperatures, but also brake temperatures. All of this while focusing on maintaining traction and speed. Players can uniquely setup their cars as doing so is imminent in succeeding in not only offline racing, but online racing. Competizione includes many different weather effects that change the approach to driving. This is simply the drivers’ game in its purest form in terms of proper on-track representation.

To further back that statement, true racing enthusiasts will appreciate the sponsorship of the Blancpain GT Series. These cars range from Ferrari and Aston Martin to Porsche and Lamborghini. The game includes all the drivers and liveries from recent seasons and provides a robust amount of variety due to how different each car feels. Thanks to the sponsorship, Competizione includes the circuits used in the series that includes the likes of Monza, Silverstone and Spa-Francorchamps. Each track is a 100% representation of its real life counterpart thanks to laser-scanning technology. This includes curbs, bumps and the tiniest of details to properly put the driver as closely as possible to a real cockpit. The game includes VR functionality, as well. 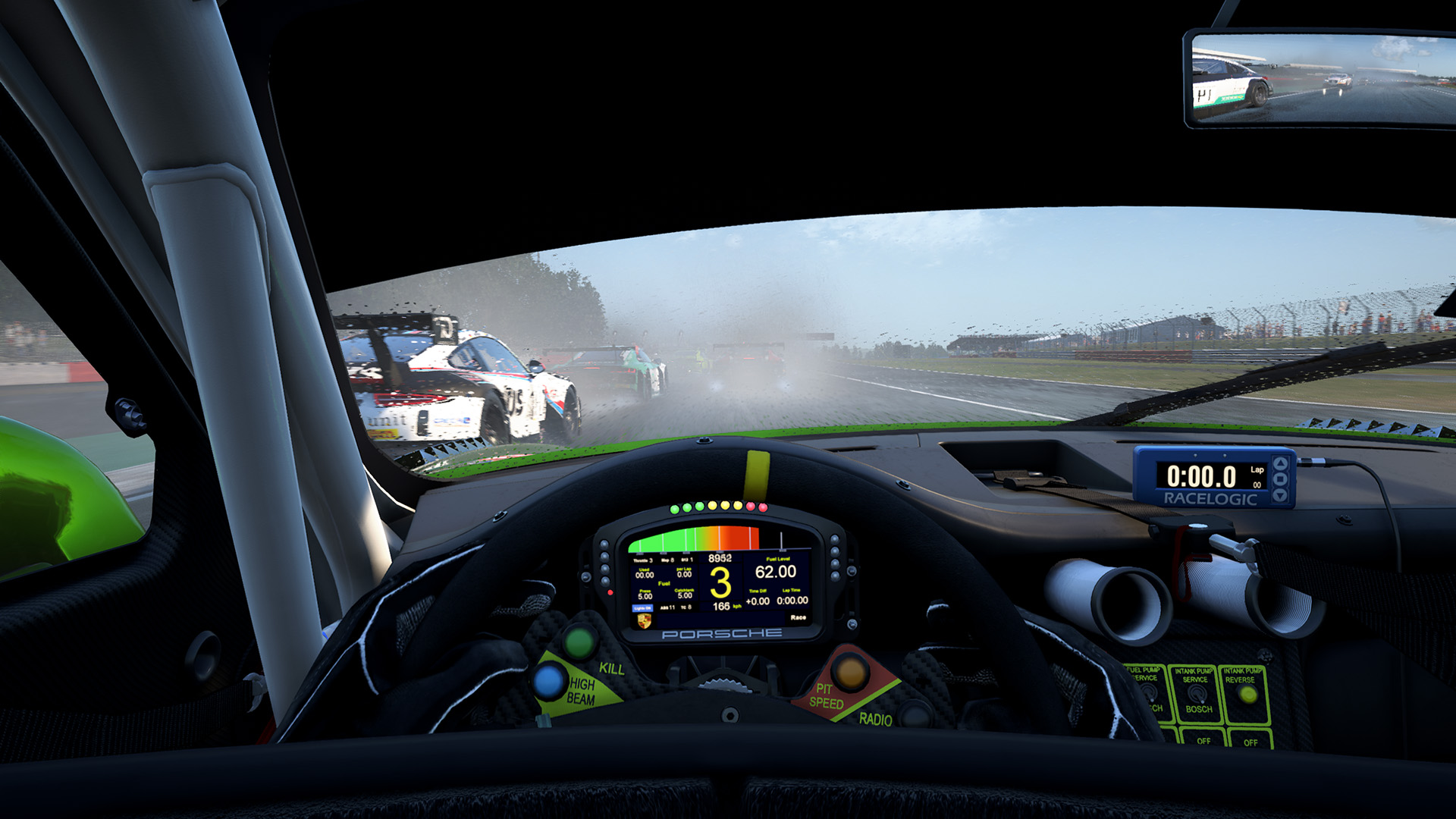 All of this is exciting and bodes well for the driving aspect, but then the gaming aspect comes into play. Having this sponsorship is a fantastic accomplishment as the end result is truly realistic, but the previous Assetto Corsa had more options. The Blancpain GT Series is literally all that is in the game. There are a good variety of cars, but not an abundant amount and they all come from the same series. There aren’t vintage cars or road cars, literally just GT3 cars. The series includes around ten tracks, but does boast some of the more noteworthy tracks racers would want.

A steering wheel setup is a necessity for this entire series. Controller support seems a bit improved in this especially when playing with a view from behind the car, but most anyone interested in this game will have a wheel setup. The driving can be utterly grueling thanks to the braking. No car in the game will require a clutch as every car is paddle shift. Using a Logitech G29 setup, I encountered some issues. I literally had to disable all controllers in Steam to get the game to recognize the wheel. Setting up the wheel will most likely be necessary to fit your comfort level, but the game offers virtually no help in this regard. It has a solid default setup with that wheel, but more assistance would be a help in terms of mapping buttons and especially during pit stops. While the wheel itself worked perfectly fine, the pedals from the Logitech G29 aren’t the most durable. It seems that Competizione is geared towards players with higher-priced setups such as the Fanatical or custom setups. My brake pedal was feeling the pain as braking in the game isn’t consistent due to the brake temperatures. There’s not a consistent braking point in the game. 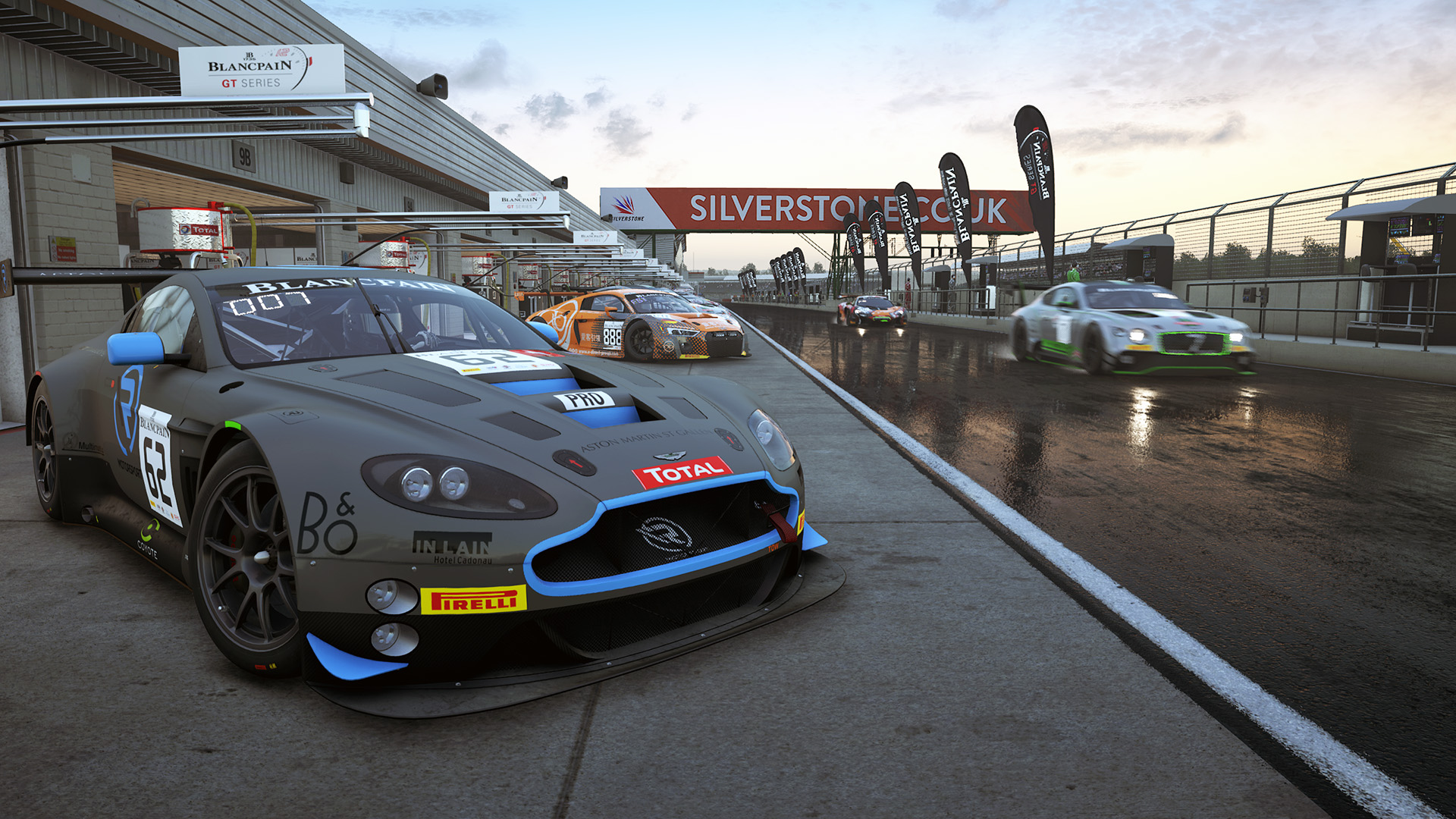 The visuals are mostly something to marvel at. The cars are extremely detailed down to individual decals on the bodies and the intricacies in the cockpits. Tracks may be laser scanned, but do suffer in detail while sitting still. The game does feature the Unreal Engine 4 and the visual prowess is strong in motion. Little things like grass patches hurt the immersion. The HDR in the game could be better implemented as the game just looks bright and doesn’t really bring the photo realism like some of its competitors. This was reviewed using a GTX 1080ti running in 4K and at high-ultra settings would net between 50-60 FPS. Strangely, a major frame drop would randomly occur. The game does run much more consistently if only running time trials. Someone with a top rig system may be able to get the better visual details.

What may be the best aspect of Competizione is the car audio. There’s no racing game that comes close to the engine audio that is replicated in the game. It’s worth playing with a headset just to have the engine noise blow out your ear drums. The level of detail for the individual sound effects are astounding. Hearing brakes squeak or hearing turbo chargers wind up is captivating. This is thanks to the multi-channel audio sampling that the team implemented. The only strange audio quirk is playing from the outside view. The cars sound like the audio was captured from the track. It changes a bit and just seems a bit off as the engines seem like they are off in the distance. It’s also worth noting that the soundtrack is amazing and it truly captures the essence of racing. 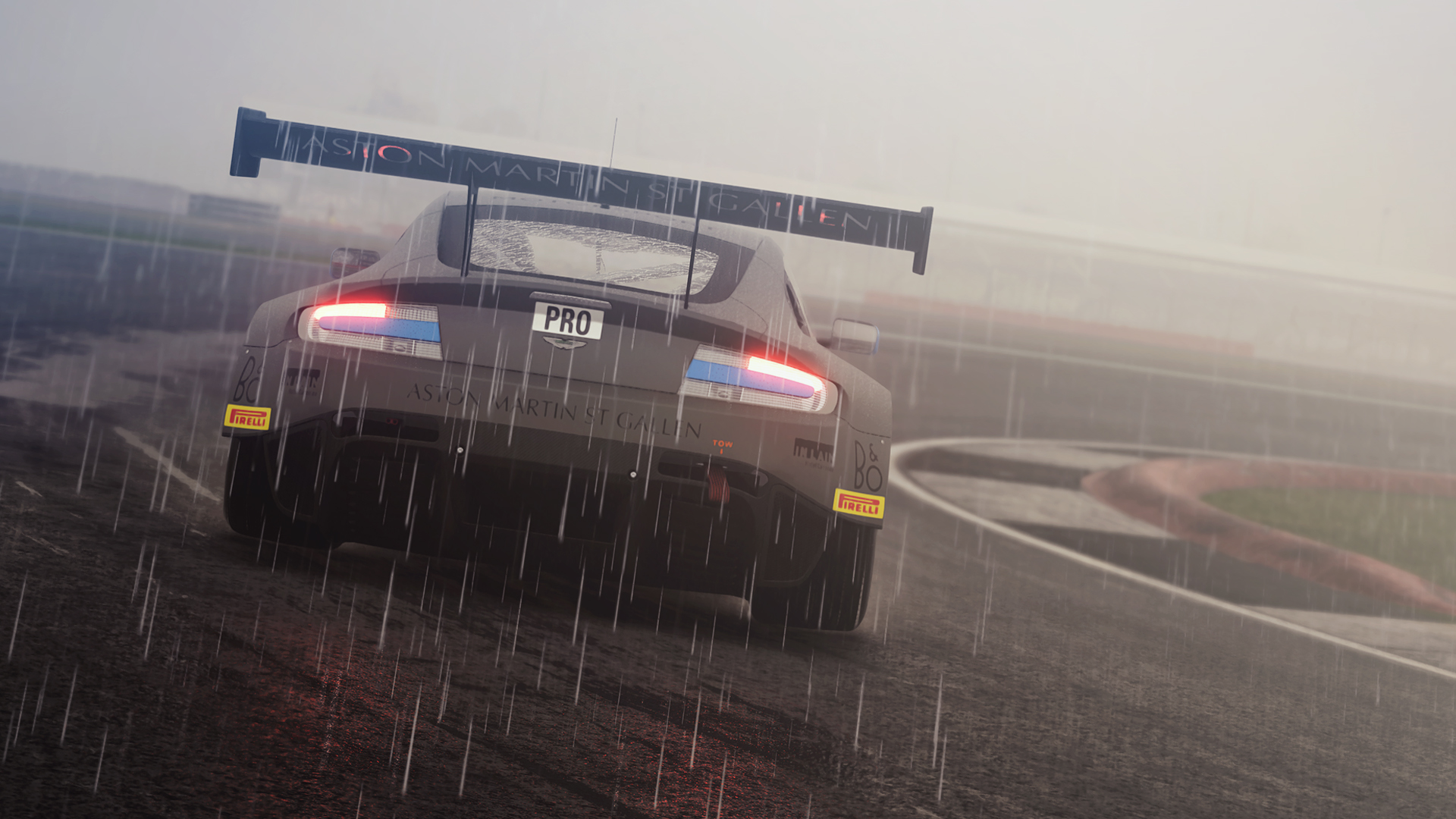 In terms of game modes, Competizione is still a bit bare bones. There is a career mode will players go through a couple of tests to try and see where the difficulty belongs. Players can create a team and some drivers for swapping in races. That is about the jest of it. Players will progress through a season and try to win a championship. Other than that, there are challenges to beat online opponents times, a championship mode and a free play mode. Multiplayer includes matchmaking but there are no lobbies.

One aspect that goes unnoticed is the driver profile. This tracks many different aspects of the player’s style and even charts the progress. Everything from trust and safety to speed can help better gauge what a player needs to work on. Lastly, it’s also worth noting that the A.I. is exceptional in the game. Opponents know where the player is on the track and you will even witness some overtakes. They don’t necessarily stay in a straight line and also have pit strategies. 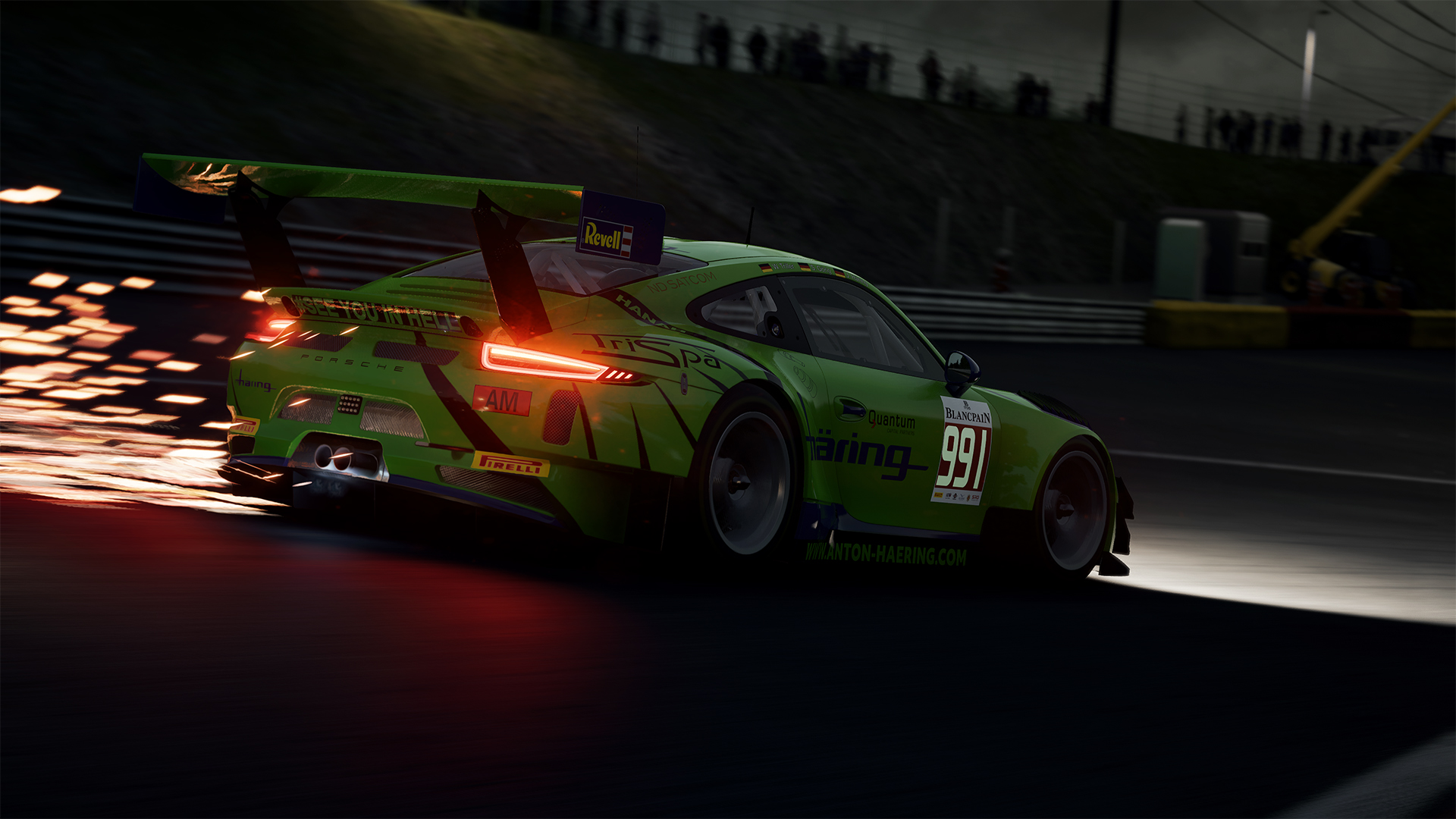 Without having to pay for iRacing or rFactor, Assetto Corsa Competizione is as real as it gets when getting behind the wheel. Players just need to have the proper setup to make the most of it. The Blancpain GT Series sponsorship is both a blessing and a curse. The cars and tracks from the series are all here and offer a solid variety, but that’s all you get. The content in the game is bare bones even though being able to do a 24-hour race or a Sprint Race is nice. Competizione is all about the racing and that is what it does best. The car visuals, and more importantly the audio, provides the closest thing to being on a track.