Shenmue III stole the show at E3 2015 when Sony gave it center stage four years ago. Now, nearly half a decade later, it’s almost time to enjoy the long-awaited follow-up to the Dreamcast and Xbox’s Shenmue II. We’ve seen bits and pieces of footage here and there, but nothing in regards to the voice work. Fortunately, the hype of E3 has led to a ton of footage coming out showing off just how much like the first two the game is – at least from what we can see now. The series has become known for many things – offering up a realistic version of an in-game world where people follow schedules, memorable voice acting, fighting, looking for sailors, forklifts and of course, Lucky Hit! In many ways, the series has been a contradiction in terms by being both serious in its plot, but also ridiculous in other ways – a bit like an old spaghetti Western.

With the third entry, you have a game that many thought would never be the case and now it is becoming a reality. The first thorough look at it reveals a high amount of voice acting – right in line with the first two games’ English translations. Both games were known for having a plethora of side activities, and that kind of thing returns in the third game. Training combat outside of battle is still possible and at least so far, you do it with either a monk or a training statue to work on your timing. This allows you to not only master the game’s timing as a player, but also build up Ryo Hazuki’s own skills at the same time. Funny little things, like capsule toys, return. Now, they feature generic things and not tons of Sega properties since this isn’t a Sega-published game, but will also use characters from this series as a nice in-between since Sega isn’t involved beyond giving YsNet permission to use the IP for this game. The legendary Lucky Hit returns, and turtle racing allows you to test your mettle with rhythm-style action. 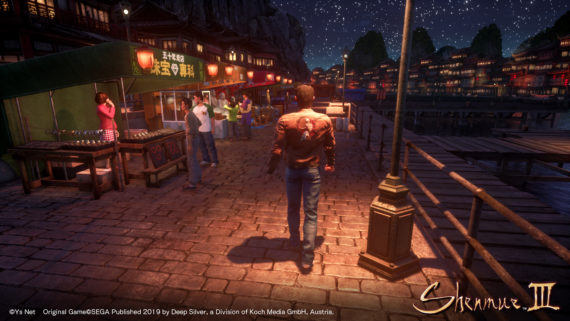 Shenmue III has been highly-anticipated since the moment it was first announced, and in under six months, everyone will be able to enjoy the game. Both the PlayStation 4 and PC via the Epic Games Store will play host to it when it is released on November 19. We’ll be keeping a close on the game’s release as it’s a very ambitious game for something largely funded by Kickstarter. If the game winds up succeeding commercially, then we could very well see a regular release schedule for it so the core story can be told. With 20 years of anticipation behind that, Shenmue III has a lot riding on its back. If it does well, then the series has a second chance at commercial success. If it doesn’t, then this could be the last time we see Ryo Hazuki’s story told.