Wolfenstein: Youngblood is a fascinating look at the world viewed through the eyes of twin sisters. This spin-off focuses on their journey to take down Nazis, and find their father in Paris. The unique element to this game is that is heavily emphasizes it’s co-op, wherein players can play along side a friend and work together to stomp Nazis down in their path. Fortunately, players can also go at it completely solo, and it’s still just as insane and action-packed as ever with tough enemies standing in the way of these amazing fighters. Whether they want to head in guns-blazing, or decide to take the slow stealthy route, Youngblood is offering tons of new ways to take down the Nazi forces still threatening Europe.

Youngblood also takes a different approach in progression, as while previous Wolfenstein titles were mainly linear this one is opened up to allow players to travel down different paths. This lets them take things at their own pace, and change up the order in which things are done. A hub area acts as the headquarters for the twin girls and allows them to take on missions at their leisure rather than just barreling through one gun fight after the other. Areas offer quite a bit more variety as well, seeing new sorts of terrain to interact and climb on in order to find the best vantage point while making way through each area. 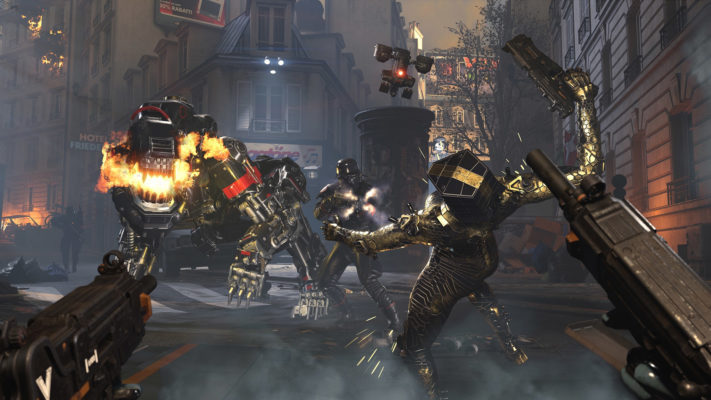 While it’s impossible to get tired of the fast-paced Nazi-killing action that the Wolfenstein titles offer, it’s nice to see a spin-off like Youngblood trying some new elements that may pay out in the long run. The inclusion of multiplayer is a great way to get more people involved, and maybe we’ll see even grander cooperative takes on the series in the future. The mission based non-linear story telling also gives some variety in how players progress, allowing for more breaks between the strings of action and giving pause to the flow of combat. For now, Wolfenstein: Youngblood is looking mighty impressive and it’s right around the corner.

Players will be able to get their hands on this new title starting July 26 for PS4, Xbox One, Switch and PC.