When one thinks of Minecraft it immediately evokes a certain image. Of course that would be a world of blocks and a player just building whatever they want. But there is more to the Minecraft name nowadays. Thanks to Minecraft: Story Mode we were introduced to a new genre of the brand with character-focused episodes. And now, yet another game is expanding things even further. Minecraft Dungeons was announced not too long ago and E3 2019 viewers received even more details on how it would push Minecraft into a new direction.

Minecraft Dungeons is a dungeon crawler drawing inspiration from Diablo, Torchlight and other titles of the genre. The action-packed adventure can be played in single player or co-op modes, even allowing for online enjoyment with up to four players. The focus in this Minecraft spin-off is combat and exploring dangerous dungeons. There are mods and talented players who could create such gameplay in the regular Minecraft game but it wouldn’t compare to this magnitude. However, it will feel familiar in some ways. Of course the art style is basically the same and enemies you encounter act just like their Minecraft counterparts. Mobs and their behaviors are based exactly on how they act in the other game. A Creeper for example will always come towards you and attempt to explode. You can use that already ingrained knowledge to better tackle the threats you come across in Minecraft Dungeons. 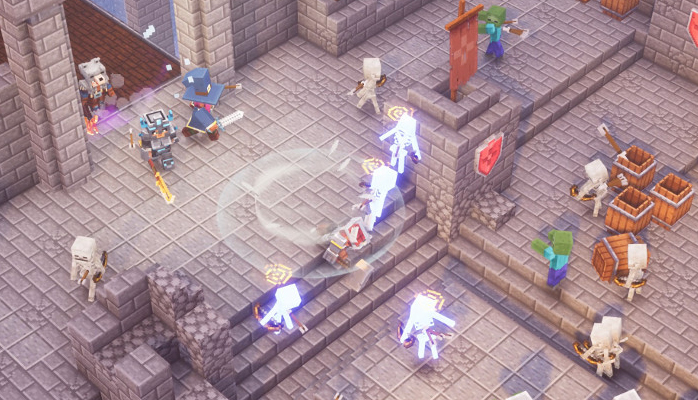 Players can find various weapons and armor to use. You can enchant a sword or hammer with lightning or poison ability to better serve you. There are no set character classes either because you get to choose what you want to be on the fly. This is where the crafting portion of Minecraft comes into play. While you can’t build you do get to customize. Become a magic user to shoot spells from a distance and immediately change into a melee combatant to deliver a devastating blow. The armor you wear will also impact the amount of damage you can sustain whether light or heavy. So, while it isn’t the strong crafting experience found in the regular game the RPG elements could satiate a crave for creation.

The team at Mojang aren’t worried about balancing the weaponry and skills. It’s all about having fun and collecting loot. And the higher the difficulty the richer the rewards. Minecraft Dungeons is meant to be understood easily so longtime or newbie dungeon crawlers and Minecrafters can pick it up immediately and play together. While the original Minecraft is still fun to play and Minecraft: Story Mode changed things up, Minecraft Dungeons is truly going to be a key turning point in the brand. This will allow Minecraft to branch out into other genres to great success.

Minecraft Dungeons will arrive on PC, Xbox One, PS4, and Switch in the spring.