Virtual Reality gaming continues to open up new opportunities for games that never used to be possible. Survios is implementing virtual reality into a pirate game that has you and three of your friends playing endless missions as you navigate the seven seas of a pirate ship. While simplistic in its control implementation yet rewarding mastery of its controls, the upcoming VR game Battlewake will give players the ability to be a captain of a pirate ship. With a playable hands-on demo at E3, there really isn’t another game out there quite like this. That doesn’t even include the depth of it.

Players will have the choice of up to four captains. Two were playable during our demo, as each captain will feature a different Ultimate weapon. The captain we chose featured an Ultimate known as “Release the Kraken.” This special, when called upon by reaching for a coin that hovers above the left hand during the game, brings up a giant squid from the water that sends tentacles in each direction creating chaos in its path. The other Ultimates range from releasing a literal tsunami on enemies to creating a maelstorm that causes ships to fly in the air. Quite a bit of extreme variety here.

The game is fairly simple in terms of navigation. Much like a real ship captain, you control the wheel of the ship and point in different direction to attack. Battlewake features multiple sets of ship weapons that are based on real weapons. Different parts of the ship feature different weapons such as guns or cannons. Players can also pull up anchors to the right or left of the wheel to pull a hard turn. The navigation is slow, much like a real ship, and the immersion factor is there. There are thirteen ship-based weapons in total and all are upgradeable as you progress through the game. Gold can be used from destroying ships to issue upgrades after each mission towards three ship items at a time. These can range from weapon damage and firing speed to ship capabilities and more. 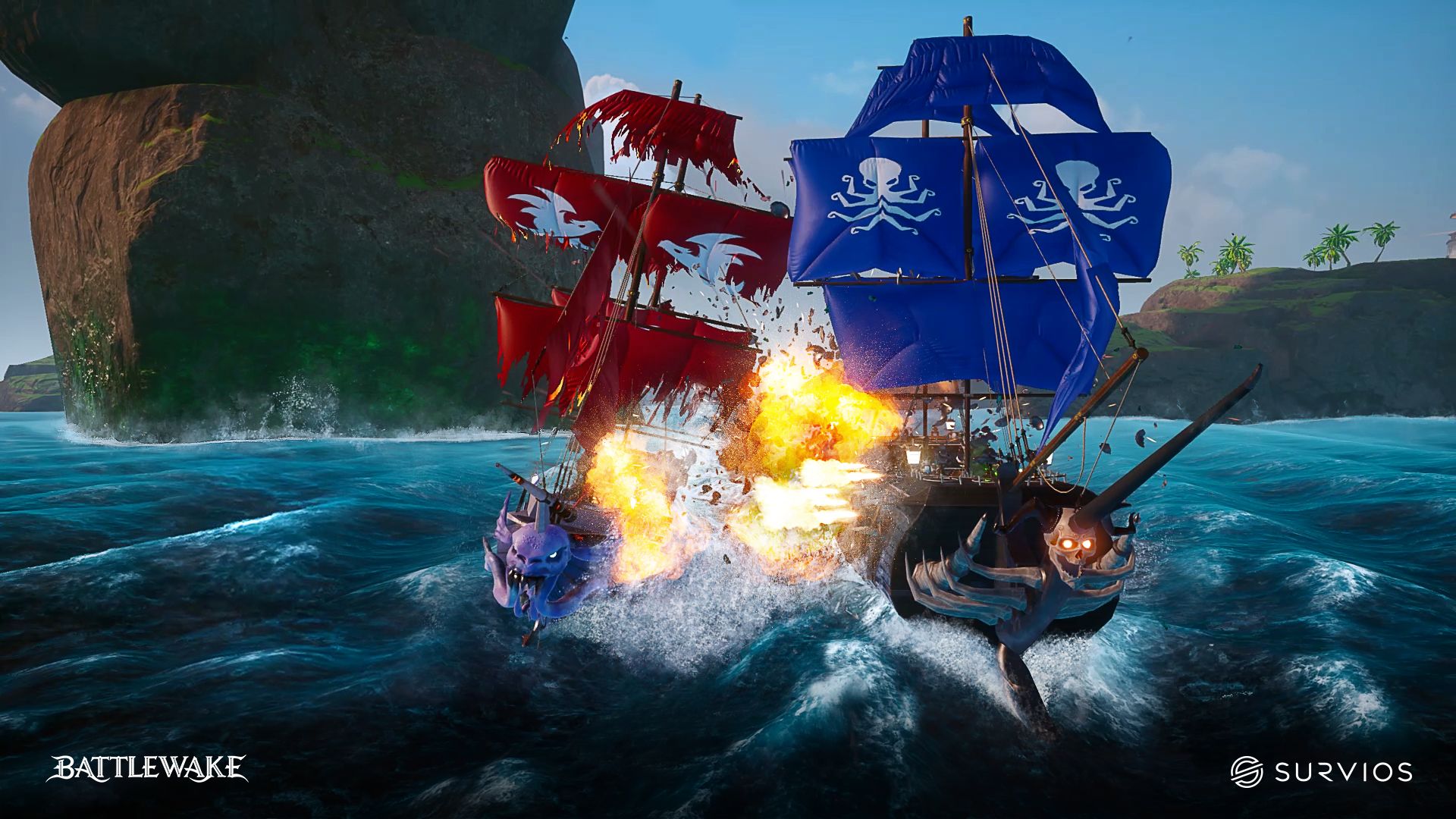 Battlewake will feature a twenty-chapter story that can be completed either solo or cooperative. The game also supports up to four players (one for each captain) that can either tackle the story or go infinite. Yes, Battlewake includes the ability to do four-player missions that are procedurally generated and will include random objectives and boss fights. This mode is known as Warfare Mode and should add a ton of replayability to the game. Lastly, Battlewake will include a PvP mode so you can sink your friends into the sea.

While the idea of a photo-realistic pirate game in VR is grand, the art design for Battlewake looks fantastic. This is an animated world full of varying environments and vivid colors. Storms and rain will play a part in the visual aspect and the world will go dark at times. The lava from volcanoes looks fantastic and this cartoon world will be a sight to see. Seeing a giant tornado over top of the ship, even though animated, is scary. It has a light-hearted look but will have an overwhelming and hectic feeling come time for battle. 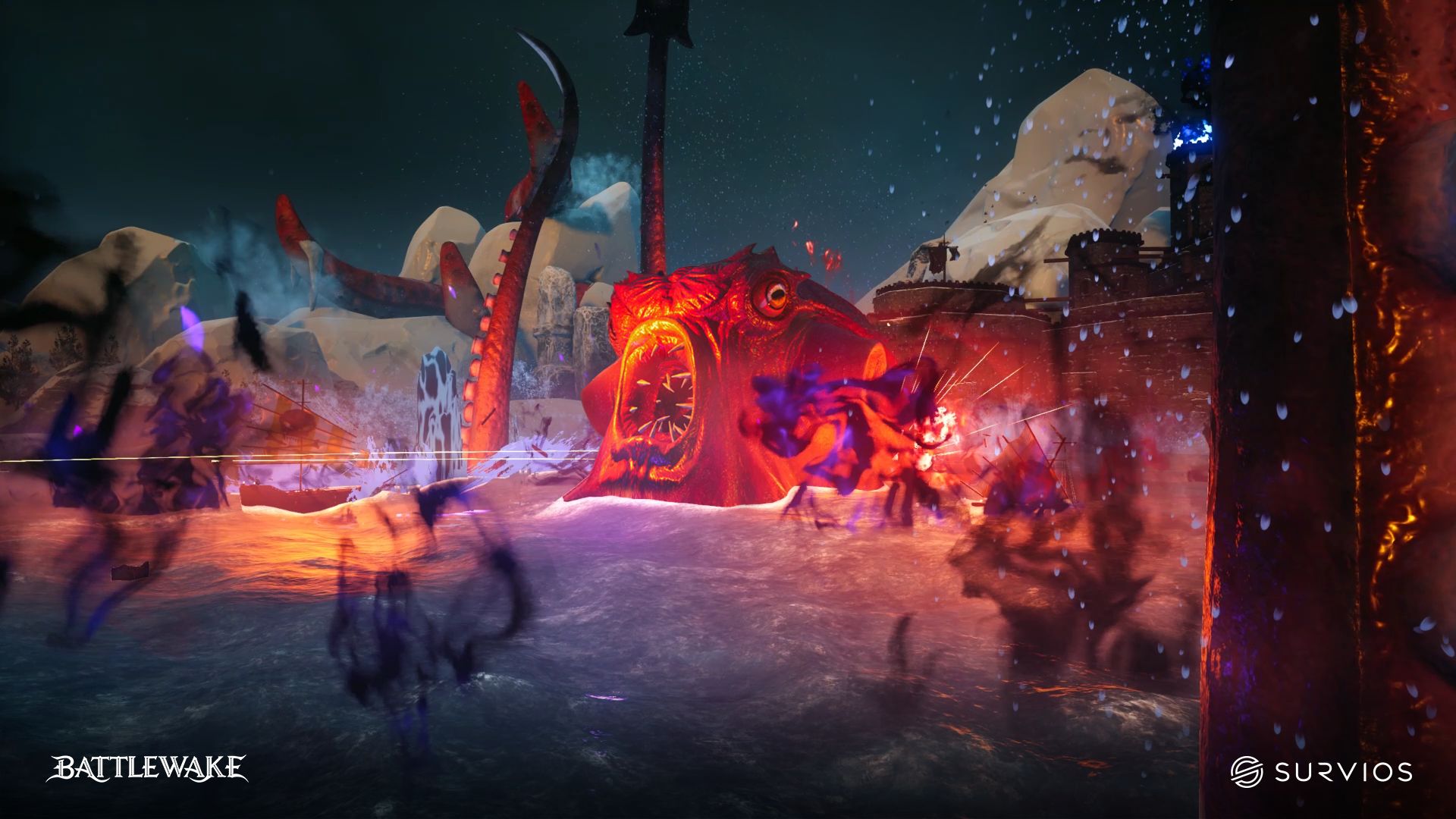 Survios is more than just a company that puts out quality VR games that push the genre forward. Not only have they instituted games like Raw Data and Creed:Rise to Glory into arcades around the world, but the team continues to implement new technologies to enhance immersion for players. Battlewake has been designed to battle sea-sickness or just sickness in general when playing VR. Stemming from Raw Data and Sprint Vector, Battlewake will be Survios’ first game to include vehicular locomotion. The technology is being called Immersive Vehicle and while the sense of being on a ship is still there, it isn’t overabundant to the point where someone will get sick from being on a ship. Using adaptive physics and peripheral effects, players will be able to focus on the action during battle while limiting triggers for sea-sickness.

Survios will be having a closed beta for Battlewake this summer and you can sign up here for it. The game will be available for PlayStation VR, HTC Vive, Oculus Rift and Oculus Quest as of now. Survios has not provided a price or release date yet for the game, but it will release this summer. Battlewake will also be playable in VR arcades.