Contra has always been one of Konami’s flagship franchises, but it’s been a decade since we’ve seen a Contra title if we discount 2011’s Hard Corps: Uprising. Leading up to E3 there have been hints at a Contra revival with the Contra Anniversary Collection and MyArcade releasing Contra devices. Speculation of a new Contra title was confirmed at E3, with the director of Contra III: The Alien Wars and Contra: Hard Corps Nobuya Nakazato at the helm. Set seven years after the events of The Alien Wars, Contra: Rogue Corps takes the franchise into several new directions while trying to maintain the run and gun action the series is famous for.

Contra is best known as a 2D side-scrolling action platformer, but the series has experimented with different approaches throughout the decades. Rogue Corps is another step in an experimental direction for Contra, which caused mixed reactions when the initial trailer debuted. As someone who believes 2D Contra is the best Contra, initial reactions to this news approach were not favorable. Symphony of the Night deviated heavily from the classic Castlevania formula, however, and is regarded by many as the pinnacle of the series. Many would place Contra III: The Alien Wars in that coveted spot for Contra, and with Nakazato-san directing, this new incarnation of Contra might not be a bad thing. 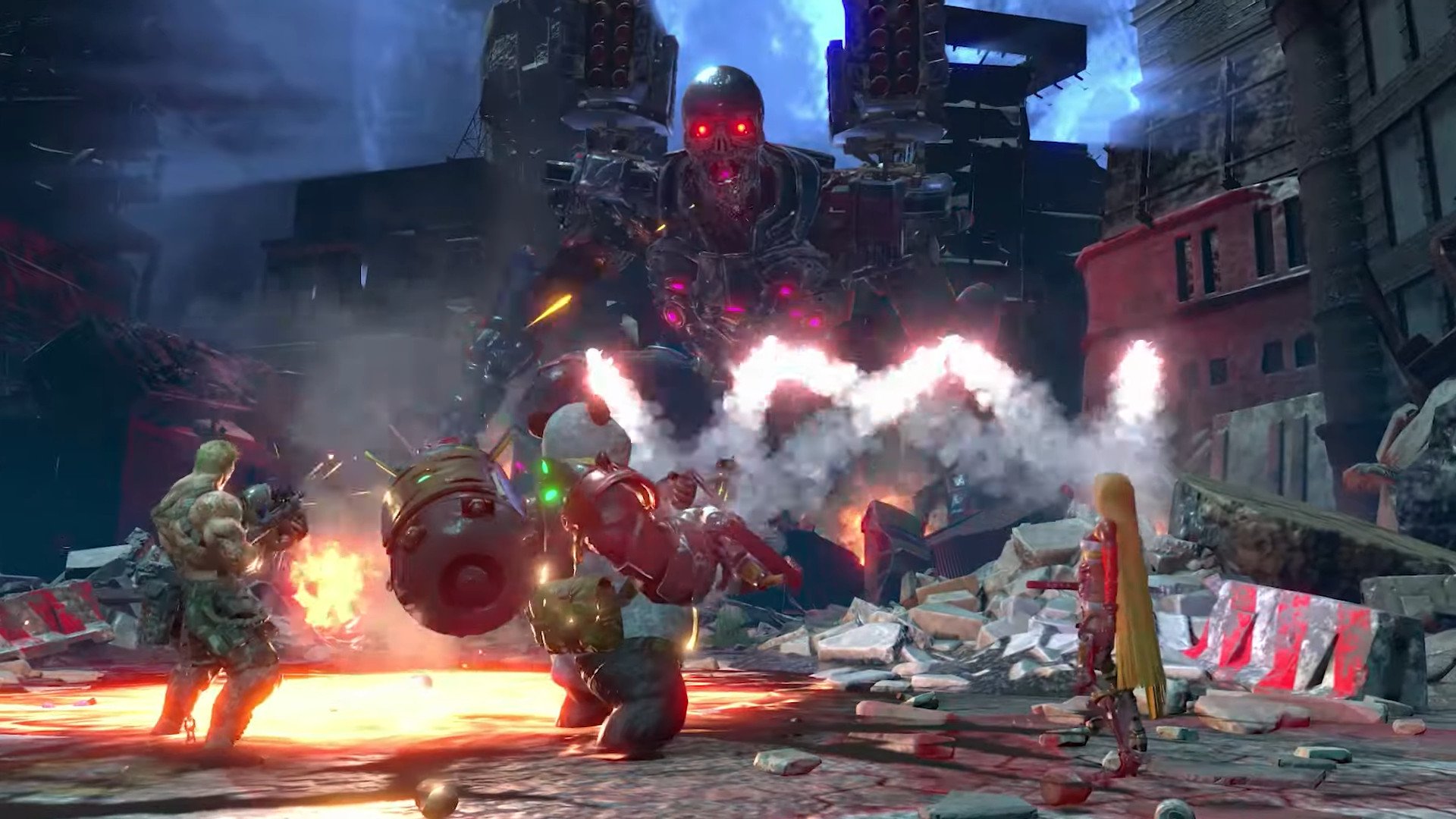 Contra: Rogue Corps is set seven years after the events of The Alien Wars, though gameplay is a huge departure from that particular title. This title is a top-down, isometric twin-stick shooter. There are four playable characters with their unique weapons and playstyles. There is Kaiser (likely a play on original Contra hero Bill “Mad Dog” Rizer), a rebuilt cyborg from the Alien Wars with a cybernetic drill arm. Ms. Harakiri, an assassin who has the unfortunate condition of a parasitic alien lodged in her midsection that she keeps in check by sticking a sword through it (we see what you did there Konami). The other two characters are a little stranger, there is Hungry Beast, a cyborg panda bear and The Gentlemen, an inhuman looking alien bug who enjoys the finer things in life and will address you with the utmost politeness. The cast of characters suggests the final game will have more of that comic book feel that was present in Hard Corps than the grittier, more realistic tone of The Alien Wars, at least as realistic as one can expect from super soldiers fighting off an alien invasion that includes robot enemies that bare suspicious resemblances to certain Schwarzenegger movies. While not having enough time to fully experience it in the demo, there are some light RPG elements of collecting materials to customize and power up guns along with purchasing black market body parts and cybernetic enhancements for characters.

The hub of Contra: Rogue Corps is a base camp where players can select their character, install upgrades and select missions. Each character has two different weapons they can switch between and a special ability. In true Contra fashion these futuristic weapons have advanced to the point of having unlimited ammo but suffer from overheating, preventing the player from delivering a constant barrage of firepower. The action takes place in the Damned City, a place that lies in ruin from the Alien Wars and known for draining the sanity from all who enter. Misgivings about the new approach to Contra started to dissipate after playing a couple missions, but not completely. The grim city is filled with various enemies of alien origin and daunting boss battles, but despite the game not being unpleasant it didn’t quite feel like Contra. It felt like a new IP with the Contra branding attached to it for marketability, which could be a mental roadblock for fans of the franchise spanning three decades. 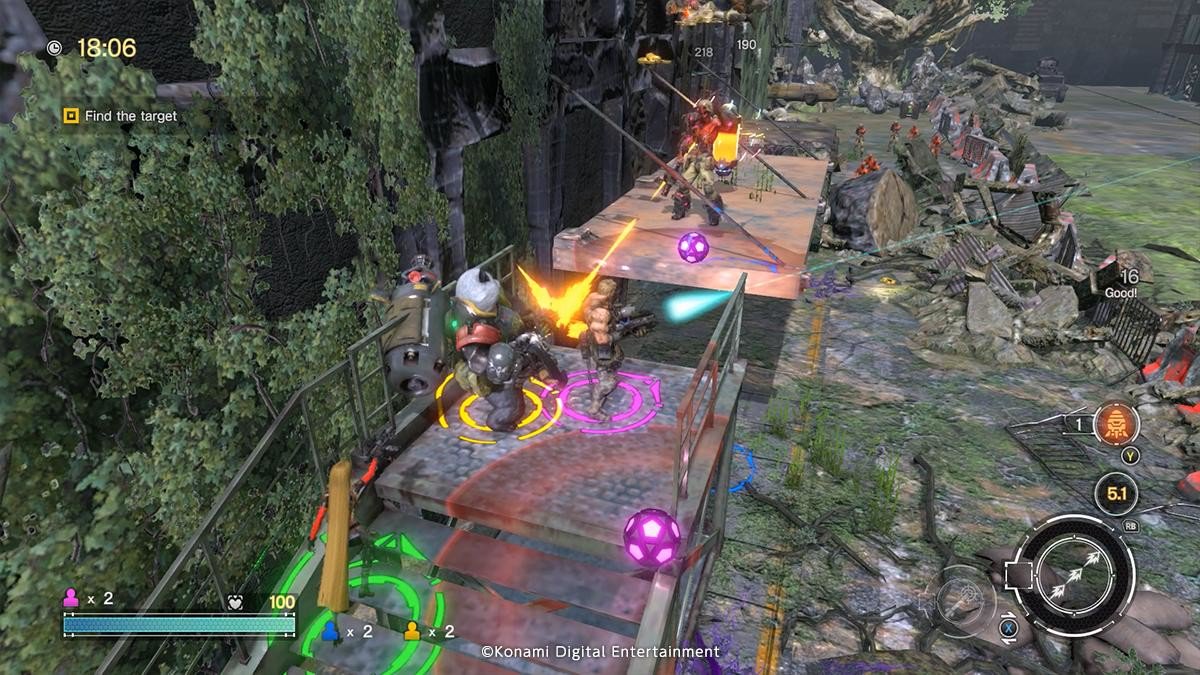 Contra: Rogue Corps is scheduled for a September 24 release for PC, PlayStation 4, Switch and Xbox One. Playing an early build for 45 minutes isn’t enough time to form a solid opinion, but expectations for Rogue Corps should be tempered to what you’re looking for in a Contra title. People wanting another Shattered Soldier won’t find it here, but fans of twin stick shooters could find something enjoyable. As a canonical addition to classic Contra titles there are many things about this title that seem questionable, but we’ll have to wait until fall to see how well this game measures up based on its own merits. The twin-stick mechanics work well for this type of game, and with a single player campaign, online and couch co-op that supports four players this could end up being a good time. The gameplay is nothing remotely like traditional Contra, but by the end of the demo my overall opinion had become more favorable. Taken for what it is, there’s a lot of potential here. As a bonus, Konami reps stated there will be no microtransactions.