When Fall Guys was first revealed during Devolver’s E3 press conference, I immediately saw people calling it a battle royale game. And these reactions honestly confused me. Even from the trailer alone, I could already tell what it was: an athletics competition/game show based around various obstacles with round-based eliminations, a la Takeshi’s Castle or Wipeout. So really, it only felt like a semi-battle royale game at best, being more akin to a Mario Party title. But heck, people were free to call it whatever they want, as long as the game is still fun. And from what was showcased so far, it seems like Devolver Digital has another hit party game on their hands.

Developed by the Britain-based Mediatonic, Headsnatchers immediately springs to mind upon seeing Fall Guys in action. There’s the vivid and colorful graphics and aesthetics inspired by various aspects of Japanese pop culture, the simple, cartoonish characters you play as, and the plans for a wide variety of customization options for each of them. The core gameplay is being presented as brutal as well, with players getting wiped out en masse, but it’s nicely contrasted with the visuals being rather chipper and pleasant. This even extended to the E3 booth as well, which featured beanbag chairs, foam floors and a ball pit (which scored Mediatonic several points in my eyes). It’s here that I duked it out with others in a three-round competition to be the sole survivor. 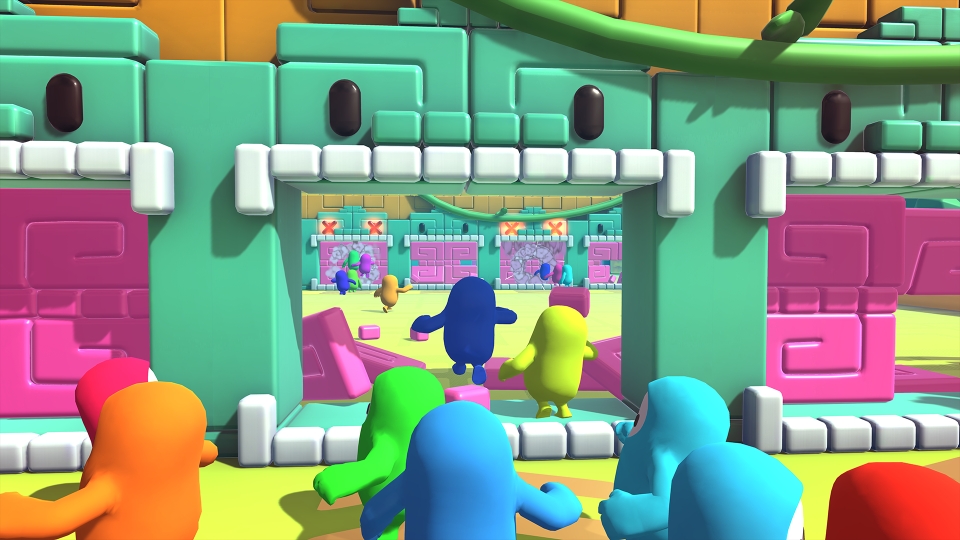 Immediately, the Japanese game show influence jumped straight out with the first mini-game, where one hundred players had to ram through rows of walls in order to reach the finish line, just like the Kool-Aid Man. Certain walls were made of blocks that could be busted through, but others were rock solid and simply had you slamming right into them before stumbling back. Only the first two thirds or so that reach the finish line advance, while the others get eliminated. If this sounds familiar, it’s because it pays homage to the “Knock Knock” challenge in Takeshi’s Castle (or “Wall Bangers” from MXC, if you prefer). The challenge this time around is that everyone is trying to ram through all the doors at once. And in a game such as this, you have two options. You can either barge ahead, try what you believe is the correct wall, and either get a quick lead or end up being stunned as others pass you, or hang back for a moment and see other players try out walls first before the correct one is revealed.

Round Two was a bit more straightforward in terms of battle royale combat. The game was called “Tail Tag,” which quickly became self-explanatory. Half of the now-remaining players are given tails, the other half aren’t. Once time runs out, those that still have tails advance. And then it quickly becomes chaos as players either try to yank tails off of someone else or or avoid losing theirs. What makes it more chaotic, of course, is the giant obstacle course that you’re running around in, combined with a multitude of ramps and swinging hammers to work with. Nicely quirky and highly enjoyable, especially when I had to scramble quickly to steal a replacement after getting my tail yanked off. 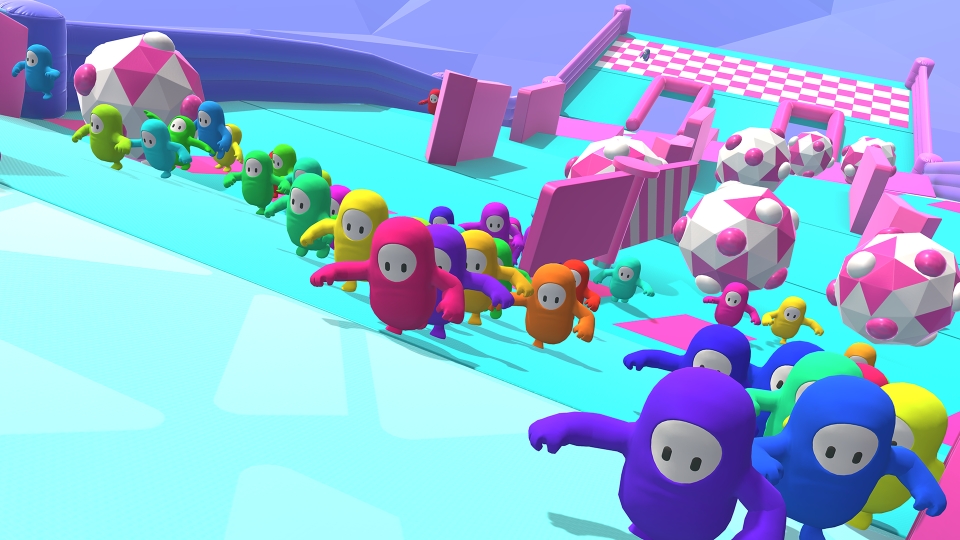 And then there was the final round. One giant mountain, first one to the top wins everything. Unfortunately, not only did we now have the likes of swinging boards and small gaps to deal with, but they had also brought giant boulders hurtling down towards us as well. So not only do you have to deal with a mob of thirty-some other players to collide with, but you also have to watch out for any sudden obstacles that could knock you on your ass, all while trying to race forward. Unfortunately for me, I was not able to manage all of this perfectly on my first try, and thus I ended up losing, forced to watch the winner do a celebratory dab on the results screen. Truly, a humiliating defeat for many, but an enjoyable experience overall.

Concerning gameplay, things are nice and simple. For a good chunk of the game, all you need is to be able to move and jump. The only exception came during Tail Tag, where we needed an additional button to yank tails off of other players (and in a bit of an anti-frustration feature, you can only grab tails if you don’t have any). Of course, what we experienced was only a trio of mini-games and it goes without saying that several more will be added to the final product (cooperative challenges are to be included later, for one). But even if future games will have additional mechanics to them, everything still seems simple to learn, helping Fall Guys come across as a game for all ages. 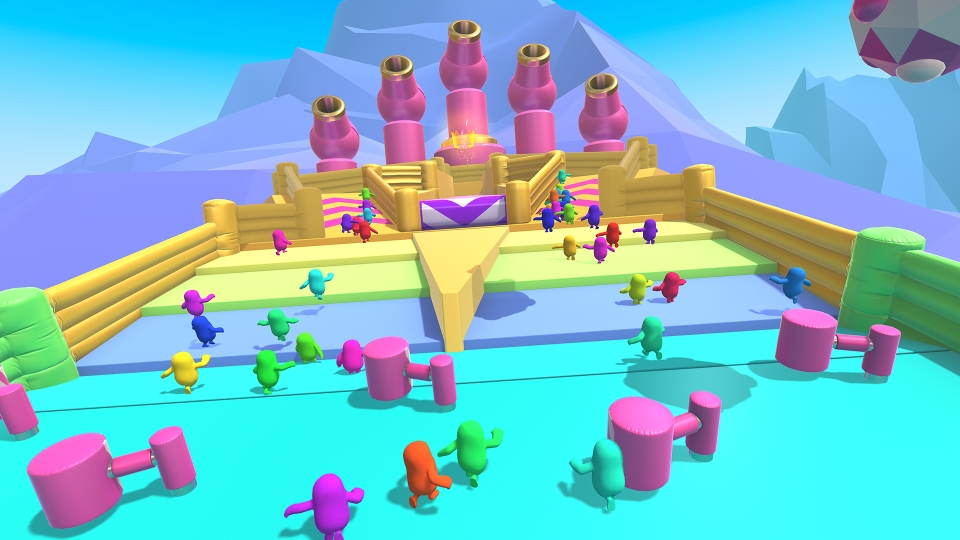 If it sounds like things went by rather quickly during my game of Fall Guys, well, that’s because it was rather quick. But then again, a lot of battle royale matches are also quick as well, with most of the herd being thinned rather speedily. Players want to be able to swap over to another game as quickly as possible. And in contrast, games like Mario Party can face criticism for dragging on much too longer than expected. So when you think about it, Fall Guys actually contains the strengths of both battle royale games (speedy matches, chaotic gameplay) and party games (cheerful atmosphere, fun mini-game ideas).

Actually, looking back on it, why are we trying to label a game like Fall Guys with one genre? Because in the end, what we have is a hybrid on our hands: A battle royale party game. The best of both worlds! It has charm for days and a cute sense of humor, but underneath its simple gameplay and colorful visage lies a nice and challenging set of crazed obstacles that requires a great amount of skill in order to still make it to first place (though a bit of luck doesn’t hurt). Fall Guys is due out in 2020 for PC and PS4 right now and we look forward to seeing a bunch of these little bastards drop like flies.