Think back to the first year-or-so of VR — across any and all platforms that felt it financially feasible to invest in hardware/software support — and while the concepts and ideas put forth were intriguing to approach, rarely did it seem that these products were built for long-term, worthwhile enjoyment. “Glorified tech-demos” is so often the go-to phrase to describe the opening line-up of titles that graced all platforms, whether it be Oculus, HTC Vive or even Sony’s own take on things with PlayStation VR. No genre was more apparent and felt as sadly complacent as the first-person shooter. What often amounted to no more than shooting galleries, though the once-flat imposing of environments now enveloped us from all around, the increased level of immersion was in no way sufficient enough to make up for the lacking variety and engagement in many a gameplay attempt. 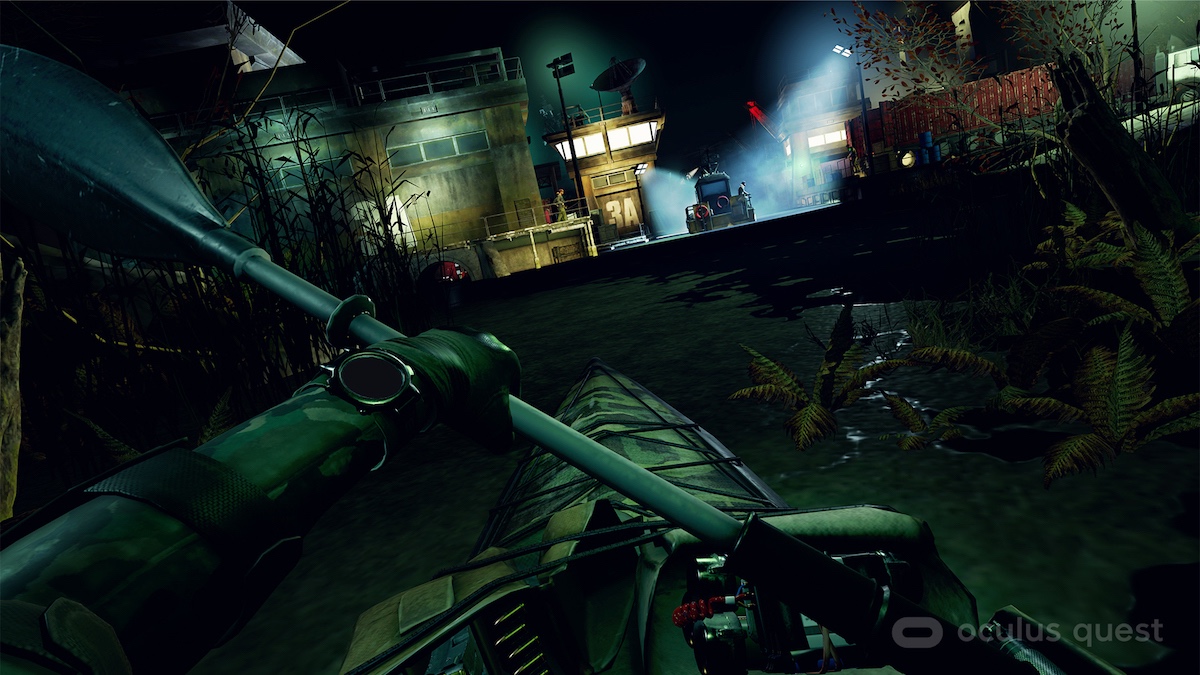 That’s not to say there weren’t some that took advantage of this restricted approach, even confiding in the idea of shooting still and without much room for mistake. Rinsing out every little ounce of nuance and appreciation for the technology now incorporated. But what’s the point of creating a first-person shooter if all one is doing is standing in the exact same position? Or worse, has to bear the illusion of movement, as being but a simple zap from one pre-destined point, to the next. Ironic that for a technology that aimed to bring a whole other level of immersion and freedom to the player, VR in this case felt unjustly compact and tied down. Let’s hope this isn’t but a string of good fortune, as it seems that some developers and studios out there have latched onto the idea that if you can’t grant players the ability to freely move themselves, then perhaps through some other apparatus can the illusion be granted.

nDreams are one of these said studios, and needless to say, the premise they offer up isn’t exactly the first thing to come to mind when one proposes a first-person shooter built with emphasis on movement. Specifically, the stakes at play — carefully striding from one overgrowth to the next in the pursuit of invading enemy territory. As far as general concepts go, invading enemy bases and taking out would-be bad-guys (if required) is about as unoriginal in 2019 as one can be in setting the scene. But what makes Phantom: Covert Ops stand out is the way in which this latest VR offering tasks players in navigating its linearly-structured mission locales. Presenting…the kayak. Admittedly, as a member of the nDreams explains prior to placing the headset on, Phantom‘s focus here is not entirely born from ludicrous ambition; being an actual branch of spec-ops wet-work, the game puts you in the shoes of a soldier experienced in the field of amphibious espionage and stealth. 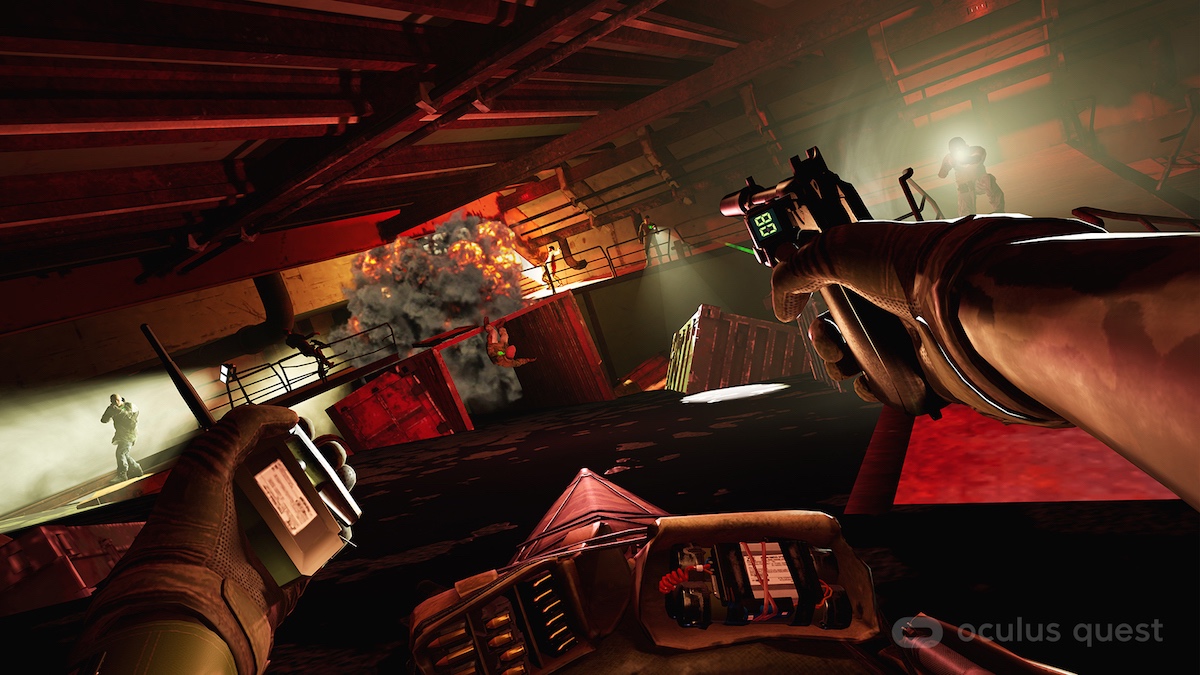 Being in a kayak, the added friction that bodies of water bring means players will be required to not only physically move, but angle and position themselves using the accompanying paddle that completes their trustee build of sniper rifle, MP5, C4 and accompanying detonator alike. Strange as it may sound to credit a game for the frustration ensuing just to attempt something as moving across the water’s surface, nDreams’ focus on the physics and believability that these actions cause, means that every move a player makes, proves critical. Once you’ve gotten over the initial confusion of having to make actual rowing motions with both controllers, the controls become surprisingly easy to get accustomed to. Only, this is just the start of the continued dilemma players face off against.

Are you so desperate to clear a mission that you’d rather just take pop-shots from out in open water? What if you miss (and that likelihood is greater than you might think)? What if the guards become alerted to suspicious fire and begin shining their lights across the surface? There are no color-coded states nor vision cones that draw an immediate and obvious surmising of the enemy’s perception. Nor is the AI generally that slow to begin with — hostiles quickly narrowing in on your position. Before long, the kayak you’re sitting in becomes a lot more of an easy target — the tables eventually turning, paddling desperately to safety turning that bit more cumbersomely desperate. 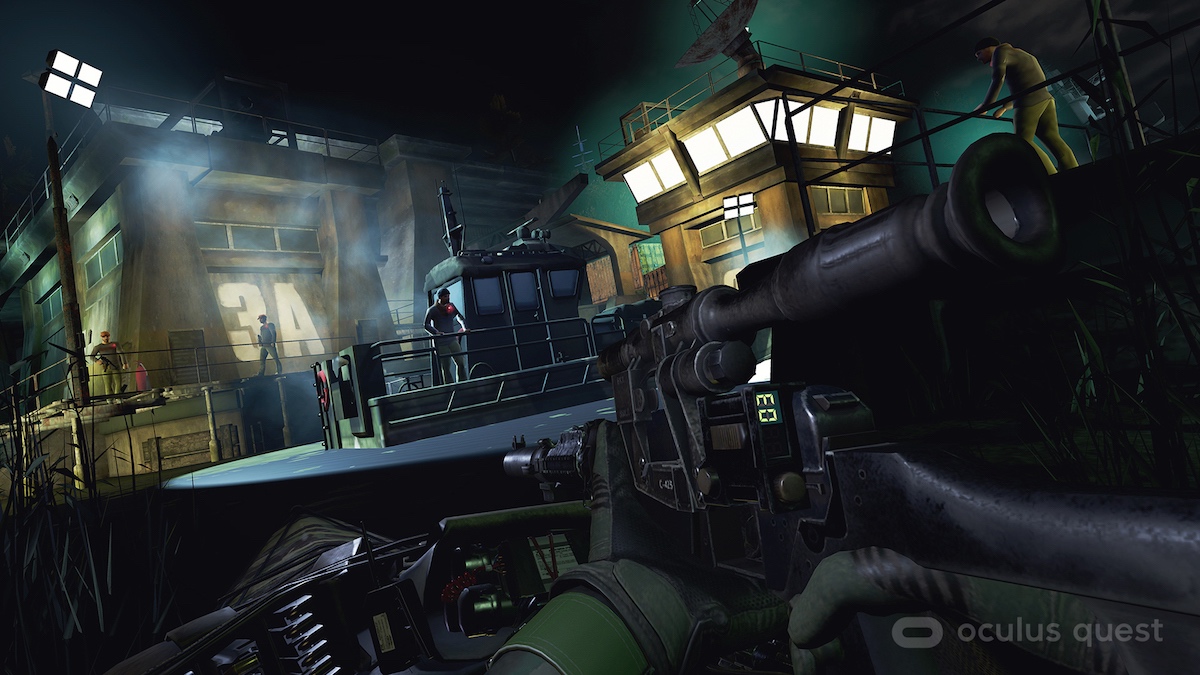 Yet this is precisely the reason why Phantom: Covert Ops works as well in VR and it’s not just down to the immersion factor — the idea that you can, theoretically, coast directly under raised platforms and peak up at an idle soldier a few mere feet above you. It’s the tension that comes with knowing that a missed shot could be costly and that the precision in one’s movement and control, can make or break a successful course to victory. The fact the game seeps deep enough into one’s focus and indeed concern, that the very idea of being too close to a resulting detonation — the main objective of planting C4 on a prime structural point, all-but-fulfilled — is something I even made sure to consider, regardless of how irrelevant it ended up being, is another small but appreciative testament to how well nDreams’ premise functions, even in such a [proclaimed] early alpha state its E3 build, was in.

Intentional dilemmas and deliberate obstacles for the player to overcome can be a risky move to make. Especially when iterations on the genre have done so well without them, developers need to nail the approach if they’re to convince players that something like physically rowing just to move can be both enjoyable and a justifiable means to a latter, gameplay end. And the truth is, bizarrely enough, Phantom: Covert Ops essentially succeeds on its proposition. Holding back on sign-posting and having all helpful elements glow in that familiar “hey, this is what you’re looking for!” sheen so many AAA titles can not avoid implementing will of course be welcome, but putting the focus back on a player’s smart decision-making (or lack thereof) will always be the crux as to whether a stealth-orientated trip is worth the time. By the looks of things, Phantom: Covert Ops isn’t lacking any sort of paddle, figurative or otherwise, with its own take on first-person shooting. Go on and add kayaking to the list of activities that gel rather well in VR.