Some winning video game concepts can be summed up in just a brief sentence. Case in point: an open-world action RPG game where you play as a giant shark. Boom, sold. It helps that the game running with this concept, Maneater, comes courtesy of developers Tripwire Interactive, who know how to deliver solid action. The Killing Floor games are proof of that, and now they’re bringing the same type of insanity to the Gulf Coast, where you play as a bull shark attempting to get revenge on Scaly Pete, a hunter that killed the mother shark when our gilled protagonist was just a child. The last time we got a major look at the game was actually a year ago at E3 2018, and now it’s back, showcasing a demo of the mayhem in action this time around. And while the concept alone was enough of an instant sale, the demo proved that Tripwire are doing all they can to make this one exceptional shark simulator.

Only a few moments into the demo, we got to see one new addition to Maneater that was a treat, and that would be Saturday Night Live, Rick and Morty and Archer alumni Chris Parnell. The framing device for the game is that of a reality show called Shark Hunters vs Maneaters and Parnell plays the show’s host. His naturally nerdy, snarky voice fits in perfectly, be it pointing out various oceanography bits such as how jellyfish are monogamous and that we’ve screwed one over by eating its partner or commenting on the bizarre points of interest relating to the local area or the people within them. For example, the first fast travel point we come across? It’s a pile of dead bodies underwater, several tied down with cement. And surfacing at night showed a group of mobsters still chucking bodies into the ocean. Parnell then pointed out that they would like to reassure a certain crime family that we would not be using this footage.

And with that, Maneater displayed a notable strength that could likely help it stand out even further: A healthy dose of black comedy and insanity. Because a game where you play as a killer shark should never be afraid to cross any lines or go as over the top as possible. Devouring innocent people is entertaining enough, but seeing our shark jump onto a beach and devour someone practicing yoga while everyone around them doesn’t seem to react is even more entertaining. And even more entertaining would be devouring that yoga practitioner, then flipping into the air and actually using the remains of that person’s body as a weapon to take someone else out. All while Cyril Figgis delivers a slight wisecrack about our attack. Again, you can see the mark of the Killing Floor developers here, coming through with some gleeful touches of comedic horror.

This carnage doesn’t go unnoticed by the local population, though. The amount of terror you spread is measured in a percentage that increases with each attack. After witnessing a few notable mauls, it was time for the local bounty hunters to appear. Yes, just like a Grand Theft Auto or Red Dead Redemption game, Maneater basically has its own wanted system. Except it doesn’t appear like you can shake your pursuers as easily. The hunters get called in, complete with freeze frames showcasing the leaders’ nicknames (that the host nicely mocks). And they don’t mess around, they come in with multiple boats filled with people toting rifles, ready to take their shots at you. But if you can persevere and pick them off until the whole crew is finished…well, congrats, because now you have a stronger bounty hunter coming after you. And as they advance, they’ll adopt tactics such as dropping depth charges, making things more challenging. 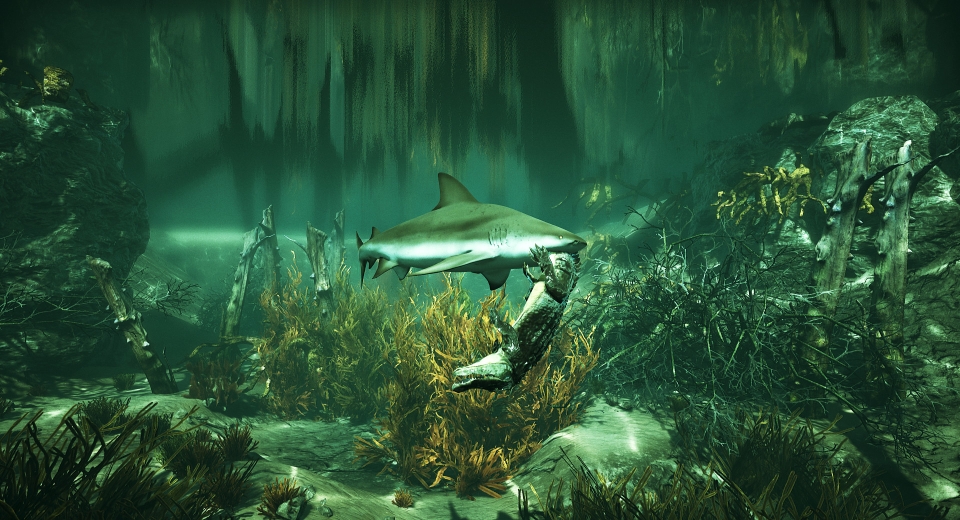 Is all of this ludicrous? Yes and enjoyably so. But there is still a deep game underneath the insanity. For one, chomping down on various sea life isn’t just for show. Not only does it grant you various nutrients and experience, but it still acts as part of a delicate ecosystem. Once you begin devouring too many fish, the apex predator in the area will see you as a threat and begin to come after you. We got to see one in the demo, a massive alligator at least twice the size of our shark protagonist. It was just lurking there right now, and we didn’t dare approach it while still at a low level, but it was still quite the imposing sight. And other areas go even further with the likes of sperm whales and killer whales. It is possible to take down these beasts and gain some highly-powerful perks, of course, but it looks to be quite the challenge indeed.

Speaking of perks, we also get to see the first peek of our shark buddy in Maneater evolving as the game progresses. And I mean that in several ways, actually. For one, we actually start out playing as an infant shark that grows up as the game progresses, increasing in size with each development period. By the end, you can expect to be quite the massive killing machine. You can also evolve in the slightly more literal sense, gaining certain traits with experience that actually alter your appearance and fit your current environment more. Maybe you’d like some plated armor or an electric bite. Or if you just want to stick to something more normal, each fish you devour delivers various types of nutrients that contributes to your growth. Or you can hunt for certain caches in the sea that contain certain chemicals that provide an advantage. 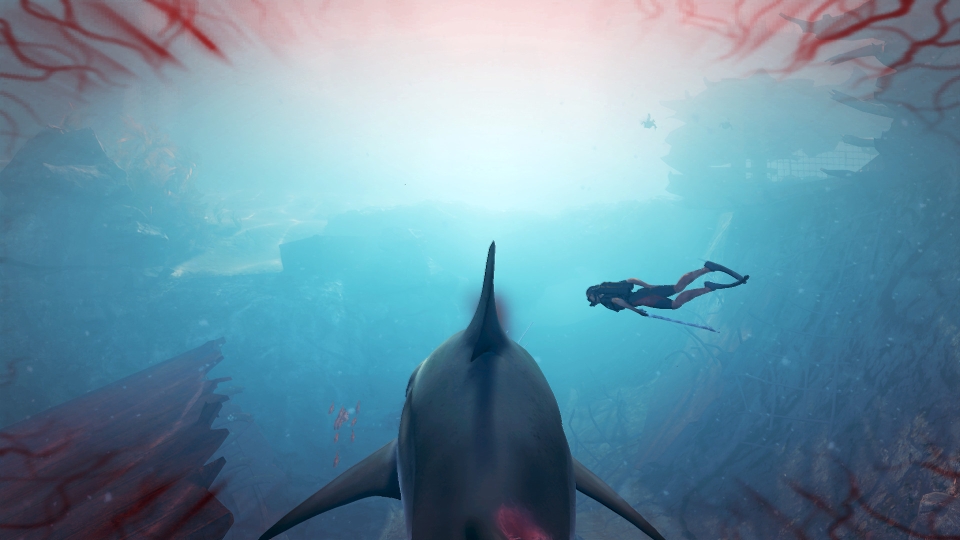 As seen with these various types of hunting, Maneater is still very much an open world game, and thus exploration is a big part of it. And on that note, it’s actually surprising just how impressive the ocean floor looked here. Well, it’s polluted and filled with various garbage alongside the underwater structures and ocean life, but what I mean is just how surprisingly detailed it all is. Bits like the mob crime scene from earlier are striking in just how much gets displayed on the screen at once. Of course, the demo only showed a beachside area being explored, with other locations including the likes of a swamp and a more urban city harbor, and the people in every area with have different behavior depending on the time of day. And getting around this rich world also requires you to master your shark skills as well, such as having to gain the swim speed needed to pull of an impressive flip in order to get over a barricade.

There was surprisingly quite a bit to be showcased in the new demo for Maneater and all of it made things clear that Tripwire is truly aiming to craft the ultimate shaRkPG here (and bonus points for actually using that term to describe the game). Everything from the humorous touches to the impressive graphics and frenzied, fun-looking gameplay suggests an absolute blast as you chomp your way through these waters. Maneater doesn’t have a release date yet, but we’ll keep you posted on when its ready to hit the Epic games Store as a timed exclusive, with Steam to follow later.