Oh, was I pleasantly surprised when Carrion was revealed alongside Fall Guys as the latest game that Devolver Digital would be publishing during their E3 conference. For one, the idea of a reverse horror game where you play as a fleshy monster and pick people off a la films such as The Thing in a 2D environment sounds awesome. But more importantly, when Devolver was asking what they should announce at E3 a couple of months ago, I happened to reply with some thoughts, including this…

…And so you’re welcome, Devolver.

Okay, so obviously this was surely a coincidence, though I still stand by my shameless self-promotion there (along with my other suggestions). After all, part of my process for choosing games to feature in Screenshot Saturday is treating each tweet as though I were an indie publisher and it were a small elevator pitch. Silly, yes, but I want to see these snippets from smaller games wow me enough to really get invested in them. And sure enough, that’s what happened with Carrion back then with its unique concept and eye-catching horror, that’s why it was featured and that’s why I’m excited to see an actual publisher give it a boost. And now having played it, I feel even more confident in Carrion than before.

So far, the setup for Carrion is simple. You’re a mysterious, amorphous blob-like creature being held in a secret facility, you break free and now it’s time to much on some humans. Oh, and eventually create nest-like areas that allow you to infect everything around you. That latter part and the facility setting in general definitely suggests that there may be something larger at play here when it comes to the plot and it is ripe with potential. But for now, what we get is good old monster movie mayhem and that works fine. 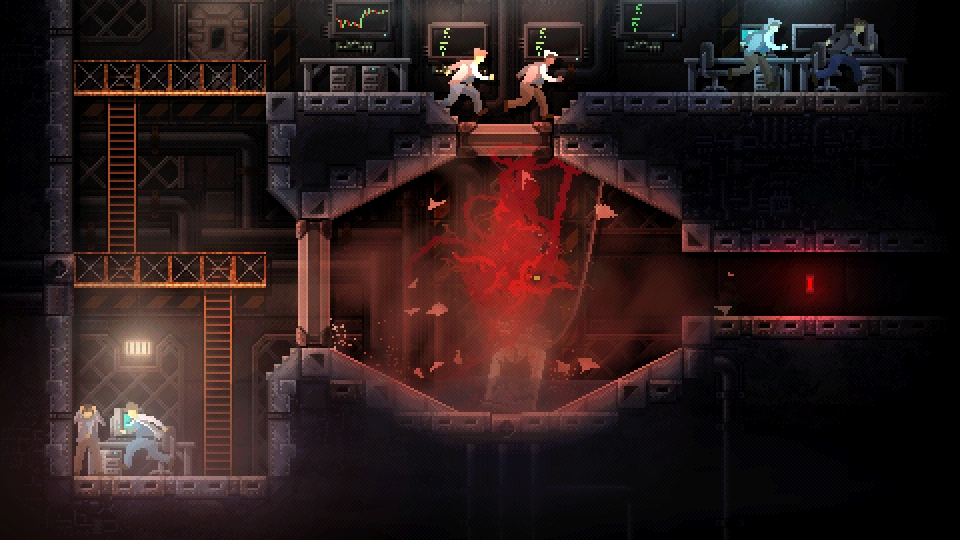 The main highlight is, of course, our tentacled protagonist and the joyful panic they provide. As one can easily guess, being able to smash into a room with a group of unwilling scientists and guards and watching them freak out over the beast before them, then shooting out tendrils to rapidly grab and chow down on those who once held you captive is cathartic, to say the least. Not that they don’t put up a fight, of course. Several of the workers are armed with guns, and as you progress, the guards begin upgrading to machine guns and flamethrowers, and security drones can even be deployed. It does seem easy to pick them off, but given your massive size, you do tend to make for a large target.

There were several times where I was worried about the guy ten times smaller than me because they could rapidly wreck things up. Especially if a room happened to contain more than one guard. This actually bodes well, though, since it feels like there’s a good level of challenge in place. The level design is also well-crafted to suit whatever approach you’d like to try. In some cases, you can just rip off the door to the current room, barge in and begin the mayhem. Or when given the opportunity, you can move through the vents instead and take the stealth approach, picking individuals off if you can. Or you can just head on through to the next room without killing anyone if possible, but where’s the fun in that? 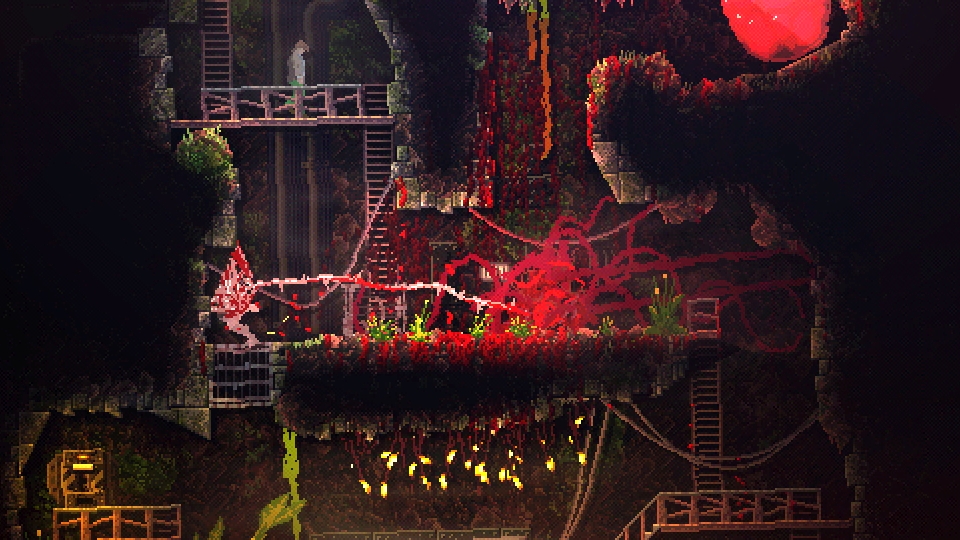 Indeed, the gameplay in Carrion is more complicated than just “grab all of the fleshy treats in sight.” The goal is to actually open the gate in each level in order to advance, which requires infecting various checkpoints that add additional tendrils needed for the job. This means that there’s a bit of exploration here and various puzzles to solve as well. The demo had us breaking open canisters in order to gain new abilities, and while some just made things easier (like a web to shoot and trap humans), others like a cloak were needed to bypass security beams. But not only is electricity needed for energy in order to power the cloak, but certain powers can only be used when the blob is at certain sizes, meaning to also have to look for area that allow you to alter it. Simple conundrums right now, but quite fun.

So our otherworldly friend with a bloodlust will be both evolving and devolving over the course of the game when needed (quite appropriate, actually), meaning appearances will be altered along the way. And it is quite a treat not to just pull off the carnage in Carrion, but to witness it as well. The pixel art is impressive, and the animation is amazing, especially with how fluid the monster is. It’s so smooth that even just moving them around feels satisfying. Not to mention the various smacks, slurps, screams and crunches, thanks to some great audio work. 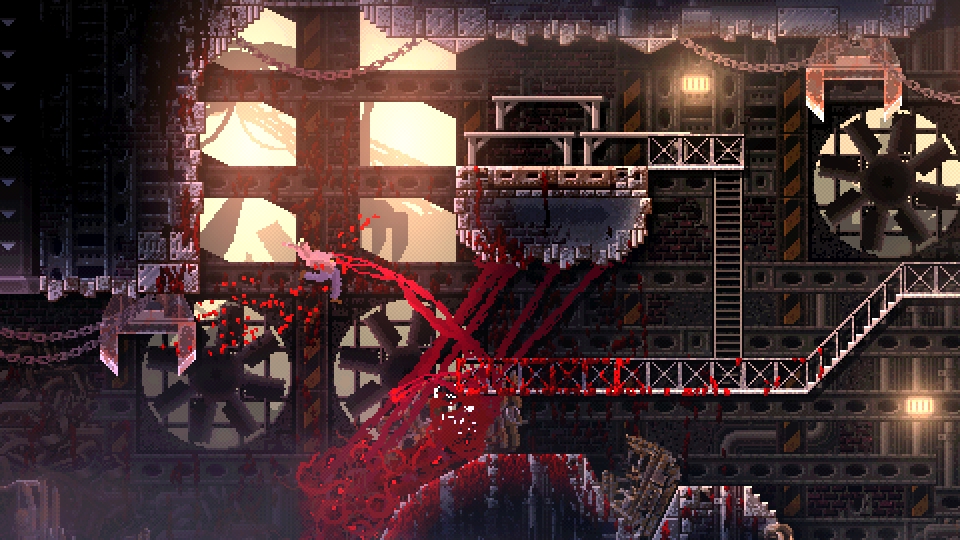 If there was one criticism to be had with Carrion, it’s that it can be tricky to aim at times. Maybe it can be attributed to the fact that I chose to play with a controller instead of a mouse and keyboard, but then again, when you are shooting out several tentacles all at once, it can be difficult to hit smaller targets like levers and pull them back with one hundred percent accuracy. Still, moving around and grabbing humans for a bite is simple and pulled off with a nice twin-stick feel, so these issues just seem to limited to a few minor moments that should hopefully be ironed out later.

So far, Phobia Studio have crafted one impressive 2D action game, one that puts a unique spin on video game horror and that’s just damn fun in general. Again, I cannot stress the joy to be had as you have your behemoth slickly slip across a laboratory floor or a wide open jungle area, almost like a nimble, harmless animal, only to then unleash a flurry of fast-paced attacks that lead to pixelated gore galore. It appears that the game I enjoyed from a small dose a while back is evolving into something quite incredible, and I can’t wait to see the final result when Carrion comes to PC and consoles in 2020.