I may have mentioned this in certain other previews, but I can easily dread having to cover games such as Killer Queen Black. Not because it’s bad or anything, mind you. In fact, quite the opposite. Killer Queen Black is a terrific enhanced version of the cult arcade game and I can easily see myself getting addicted to it. The problem is that games such as this tend to fall under the category of “simple yet brilliant” and as such, there isn’t a whole lot to elaborate on. Needless to say, this gets a bit annoying when you want to shout out just how much you enjoyed the game from the rooftops. But I suppose the easiest thing to do is just to simply recount my experience playing the game at E3, so here we go…

The setup is easy to understand. Two teams of four bees each consisting of one Queen and three Workers take to a 2D field with the goal of domination. There are three ways to win: a Military Victory where you kill the opposing team’s Queen three times, an Economic Victory where Workers correct enough berries on the field and bring them back to their base, or a Snail Victory, where workers successfully ride snail place in the middle of the arena to their end, a la any payload mode in a team FPS. Whoever wins three rounds first with any victory is the overall champion. Playing with seven other people at the Indiecade booth, we huddled around a TV and duked it out. 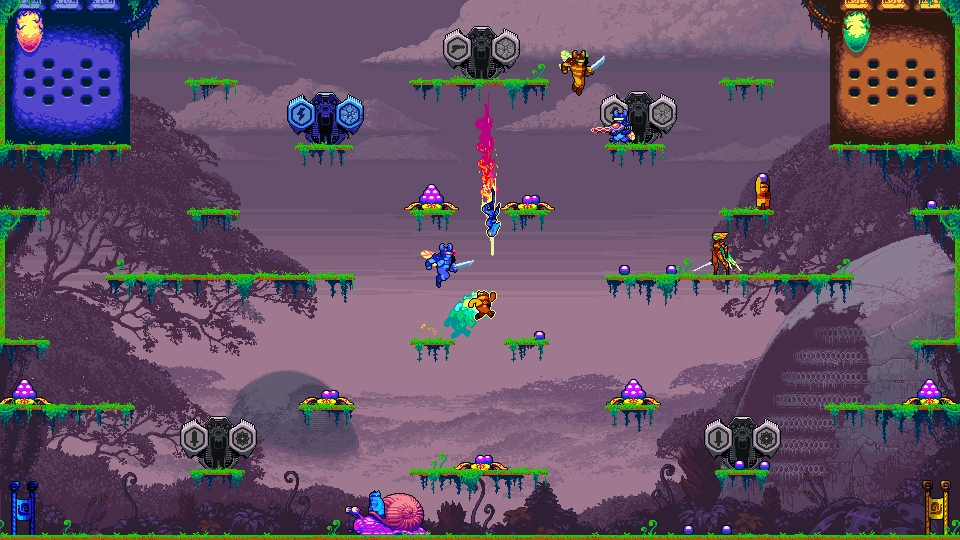 I decided to start out as one of the Workers on the blue team. And as I felt that an Economic Victory would be unexpected, I tried focusing on that. It’s trickier than expected, as not only are there usually two different areas to deliver berries to, but it takes a while for the delivery animation to finish. Eventually, I decided to simply try throwing the berries at the holes in order to skip the placement sequence and speed things up, though this was riskier, as bad aim meant the berry could miss and roll away. But it was a neat challenge and the controls for it were fine, and I was starting to succeed, so I kept at it aaaaaand whoops, our Queen died. Rinse and repeat for three rounds.

Okay, that didn’t go as smoothly as expected. So we all tried another game. This time I figured that if the guy currently controlling our Queen wanted to go for a Military Victory, I had to back them up. Unfortunately, workers on their own can merely jump and collect/throw berries, they need to be upgraded to Soldiers at various gates placed around the arena in order to be capable of attack. So after bringing a berry to a gate and gaining a sword plus the ability to fly, Joust-style, I was ready to both go on the offensive and defend our Queen. Charging forward with confidence, I lunged at what I could aaaaaand whoops, our Queen died. Rinse and repeat for another three rounds. 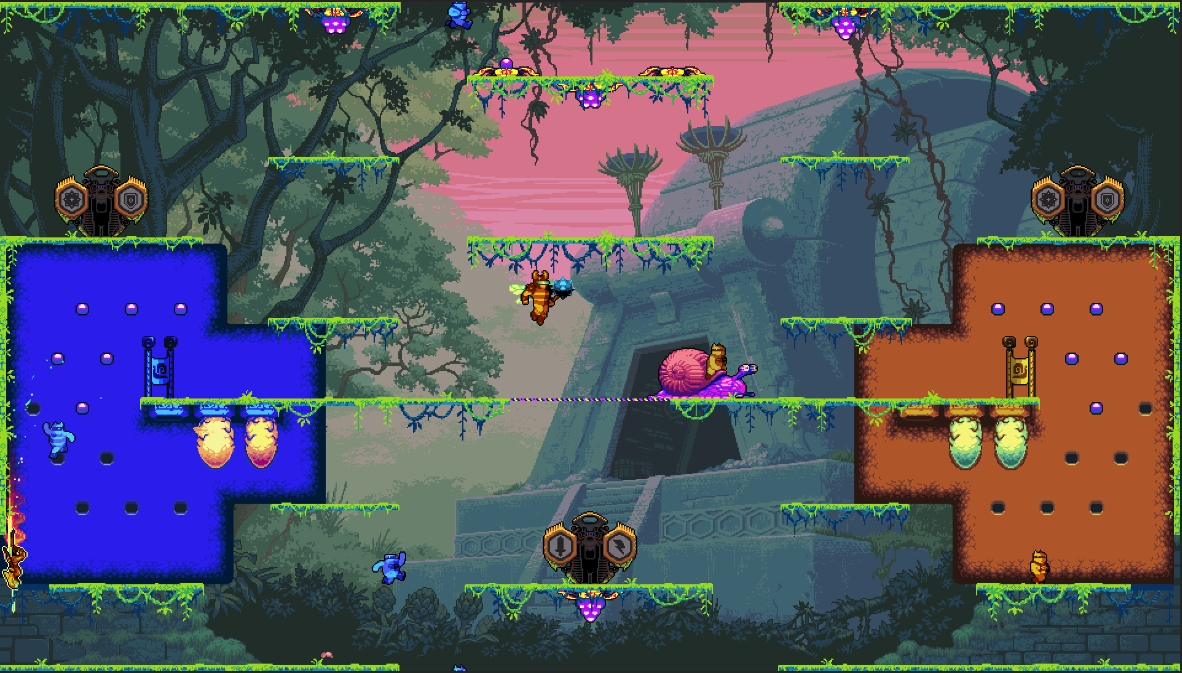 It was at this point that I figured we may benefit from shaking things up, so I volunteered to be the Queen in our next game. Unlike Workers, the Queen is purely offensive, capable of flying and lunging at opponents with their sword, flying similar to Soldiers. It was easy to get used to them and fun to control. The game started, and this time around, I decided to skip the Military Victory. No, I would simply fly around, pick off the opposing team’s Workers (who have infinite lives compared to the Queen), immediately claim the gates by hovering over them so only our team can use them, and only attack the opposing Queen when the opportunity presented itself. Basically, I would work on benefiting the team in general and aiming towards whatever type of goal we were closest at.

And it worked! After some focusing on the gates, enough Workers on our team upgraded to Soldiers and they were able to pick off the enemy Queen twice. The third time, I was able to either distract or pick off enough of the opposing team while a couple of our Workers scored an Economic Victory. This is where it became clearer than ever that Killer Queen Black has a deeper level of strategy behind the old-school arcade action on the surface. You need to be able to properly manage everything in the current arena and quickly adapt if needed in order to either score or block a victory condition, whether you’re playing as a Worker or Queen. Proper team communication is also vital, but given the crowd and noise, that was trickier than expected.

In fact, our opposing team seemed to have quickly realized the need for these skills in our next game as well. After two victories, including a successful Snail Victory (allowing me to see all three conditions in action, all of which were nice, fair and posed a satisfying challenge), the yellow team began to seemingly become more synchronized and went for my Queen even more. Try as I could, they simply outdid us. But during the final round, during some highly-satisfying swordfight-esque duels between me and the other Queen, a Soldier was able to nail off some good attacks and we were victorious. 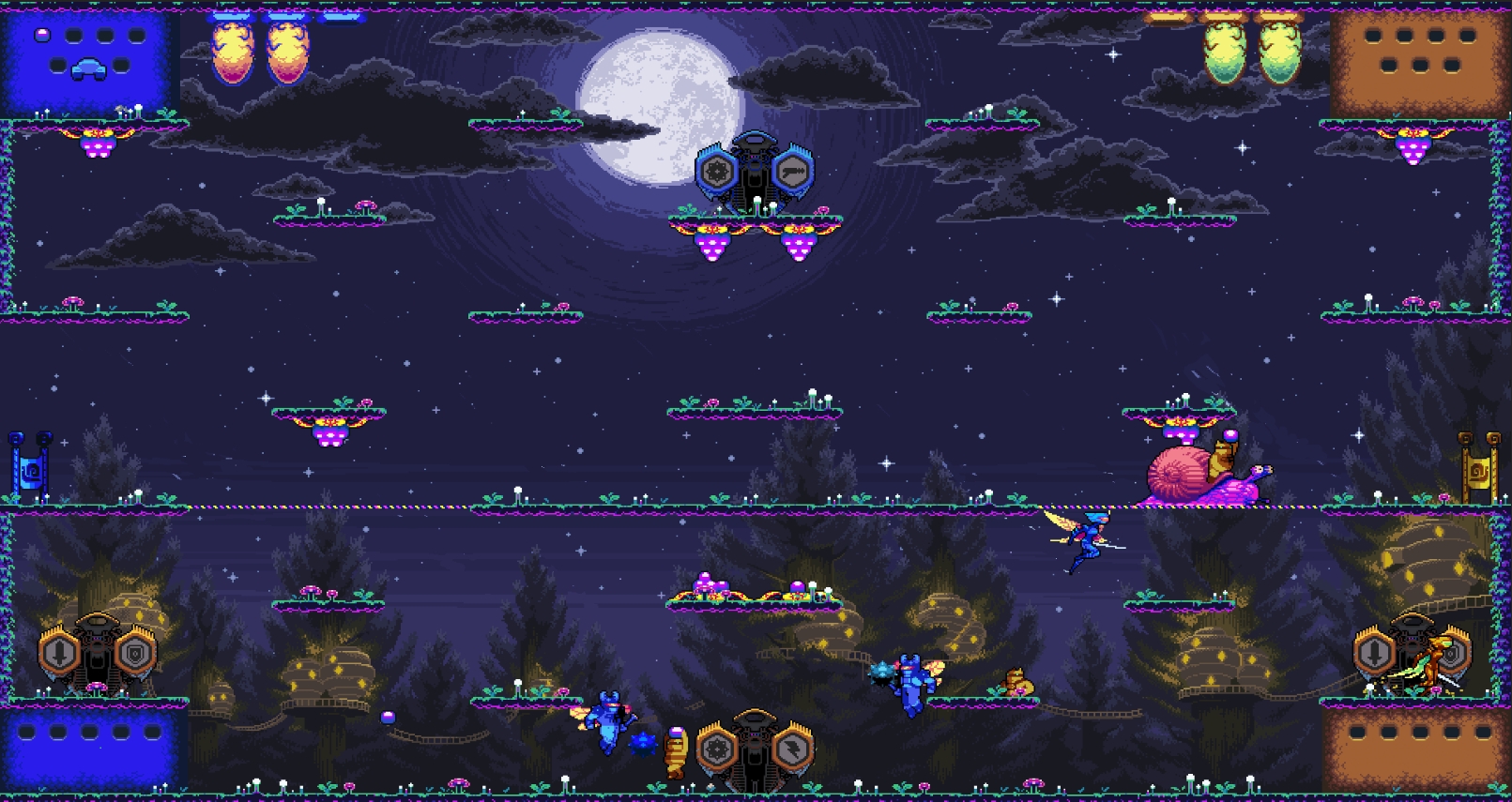 Each of our victories was capped off with the music of Powerglove, whose metal tunes nicely served as a cherry on top. In fact, Killer Queen Black was striking in its aesthetics as well. Powerglove also had little ditties for the introduction to each stage and the music overall was highly enjoyable. The colorful art style was also a plus, especially with the nice contrast between the cartoonish Workers and the more serious Queens. There’s a nice variety of details in each arena overall, in fact, each one with a unique feel, and each being expertly designed in order to allow for both fast-paced platforming and flying action.

So looking back on all of this, I suppose there actually was more than expected to say about a game like Killer Queen Black. And that is a testament to developer Liquid Bit’s skills. This homage to classic ’80s arcade games was an absolute joy to experience, especially with a group of people. It’s a shame we couldn’t experience the special Black Team feature where a reigning champion’s matches are broadcasted online at all times, but I suppose we’ll test that later this year when Killer Queen Black comes to PC and Switch in Q3, followed by an XB1 release in the Winter.