Virtual Reality games continue to progress with innovation and implementation. The team at nDreams is no doubt fueling this as its game Phantom: Covert Ops was shown off at E3 2019 in the Oculus booth. This stealth-based game deviates from the norm as the player sits in a canoe to navigate a Russian compound. Players will mimic a real canoe and the game even takes into consideration advanced mechanics. The idea is to play the game while sitting down so you won’t be bashing things in your gaming room. We sat down with Lewis Brundish, who is the Game Director for Phantom: Covert Ops at nDreams. We picked his brain some to see where the concept for the game came from.

With the focal point of the game involving staying on a canoe, this is a concept that must have taken some time to implement. We asked Brundish how this concept came about. He stated, “We wanted to find a way of moving around in VR that didn’t break the immersion. We knew we wanted to make a substantial game that you could spend time exploring at your own pace and be comfortable. We were looking for ways of getting you to move, looking at ways of being comfortable. So, we hinted at the idea of sitting down to play the game so you could play it for long periods of time. Then we started looking at the boat and we went through many different iterations of the boat. We had boats with engines and boats with other people in them. It was really that one-to-one movement of the paddle that felt powerful and so in control of what you do.”

Phantom: Covert Ops will not be a rail shooter as clearly the freedom will be here to do what you want. There are also advanced metrics that can be pulled off while using the canoe. Brundish mentioned some of these. “We’ve built the canoe so it should be really accessible for first time users and after a few minutes, you should be able to get to grips on the basics. But there is a lot of depth in there that you can really learn over time. Obviously, you have your basically paddling using left and right (on the move controllers) to move forward. We have a power turn mechanic where if you hold down on the button, it changes the grip on the paddle and makes it turn much sharper. Then, there’s all this kind of intuitive extras that you get. If you shift your weight left and right and lean, it’ll shift the weight in the canoe and it’ll turn based on where you’re leaning. You can reach out with the paddle and push off the side of the environment. You can also hold the paddle behind you and it’ll act as a rudder, so you can steer like that. Every now and then, someone plays the demo that is a bit of an expert kayaker and we’re always really pleased when they say ‘wow you got that just right.’” 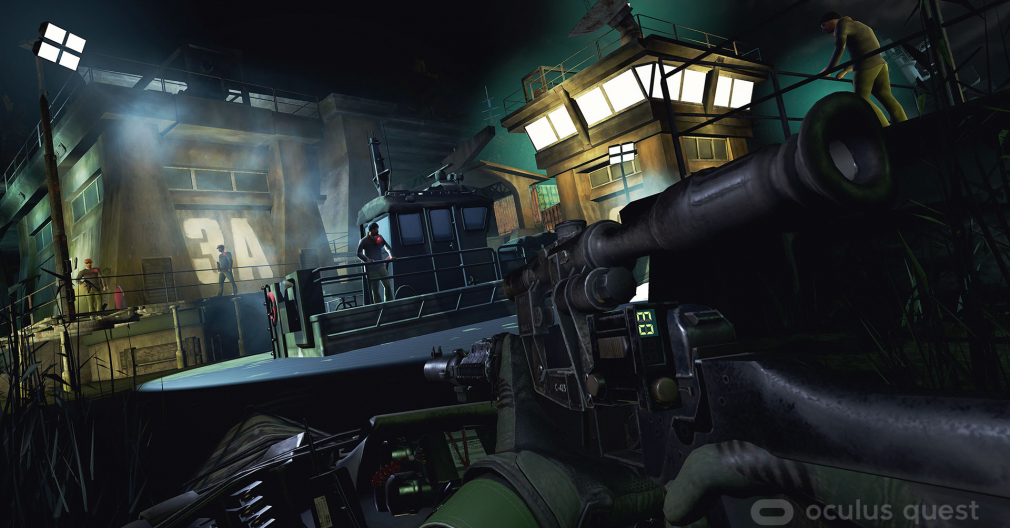 There won’t be an overwhelming amount of ammo in the game, as strategy and stealth are the primary objectives. For weapons choices, we asked Brundish what will be in the arsenal. “You’ve got weapons and equipment to use. You have a small slot on your chest for handheld weapons. On the back, you have a bigger slot for a two-handed sub-machine gun. And then down the side of the kayak, you have a longer stash for a sniper rifle. You also have equipment pouches that have ammo or explosives. Throughout the game, you will find new equipment and when you come back to replay missions.”

The AI will be tricky to deal with. Your player won’t have a ton of health and obviously the idea of the game is to stay hidden. But sometimes things happen. Brundish discussed with us the enemy and their tactics. “We’ve got kind of this unique situation where obviously you’re in the water on a kayak. You have two or three types of enemies you can engage with. You have the ground guys that are walking around on banks, you also have enemies on various patrol boats and a helicopter that’s patrolling the base searching for you. So the key to interacting with the AI in our game is using the water and waterways that open up new opportunities such as going underneath or around them. We want to make sure the canoe gives you an advantage over the enemies.” 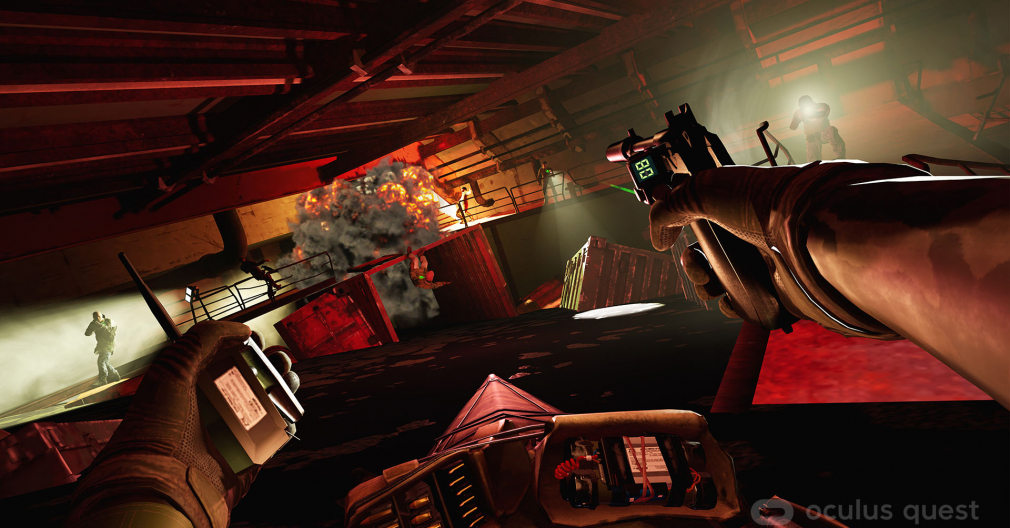 The goal of Phantom is to provide long playtimes for the player as the focus on sitting will drive this. We asked about the longevity of the game. “We don’t have a number of hours,” Brundish said. “Our goal is to make a substantial game. It’s narrative driven and set at the end of the Cold War. It all takes place over the course of one single night and you will discover who this rogue militia is, who their leader is and what their plans are. You’ve got characters in the game and other people in the world. You also have your team over the radio. While we aren’t setting a number of hours, I’ll say it’s a substantial narrative experience with a ton of replay value.”

With VR, and especially the guns, something needs to stick out about the weapons. The option for more than just pointing and shooting should be apparent in a stealth VR game. We asked Brundish about what we can expect with how the weapons work. “We’ve spent a lot of time to make sure the weapons feel just right. You can hold them one handed or two handed. Some of the weapons have iron sights, laser sights and we also have the sniper rifle with the scope. So that’s another thing, in a traditional game, you may have a button designed to look down the scope and another for holding your breath while you aim. We’re trying to make full use of using VR, so you have to lift that scope up to your eye and close one eye. We are actually implementing a workaround for closing one eye because we occasionally get someone who can’t do that. Then, if you steady your shot, you physically hold your breath.”