MachineGames’ reboot of the Wolfenstein franchise has been quite successful so far. Both The New Order and The New Colossus astounded players and critics at launch thanks to strong storytelling, characters and gameplay. For Wolfenstein: Youngblood, the goal is to take what worked so well in those titles and expand it in exciting ways. That new way is through co-op. Does co-op work well in this universe? Surprisingly, yes, but with a few hiccups.

Wolfenstein: Youngblood takes place 19 years after The New Colossus. America is free, but Europe remains under Nazi control. Rather than play as series protagonist B.J. Blazkowicz yet again, Youngblood puts players in the shoes of his 19-year-old twin daughters, Sophia and Jessica. The duo, along with their best friend Abby, travels to Europe to find their father. Despite the addition of co-op, Youngblood maintains the franchise’s core DNA. Expect lengthy cutscenes, plenty of character-building moments and lots of blood. The real change to the formula is an injection of humor, which makes sense considering you’re playing as untested teenagers. In an early sequence, both sisters use humor to hide their nerves before clumsily taking out a guard. Following the blood-letting, the sisters puke on each other. It’s a moment of levity in a world that has, up till Youngblood, been strictly serious.

The gameplay feels familiar despite the addition of co-op. The demo saw both sisters infiltrate a Nazi Zeppelin in pursuit of General Winkler. Those who played the previous games will feel right at home in Youngblood. The weapons feel big and powerful, the attachments add versatility to each gun and the level design allows for multiple paths to complete an objective. Youngblood is distinctly Wolfenstein, but the addition of co-ops does add interesting wrinkles to the formula. 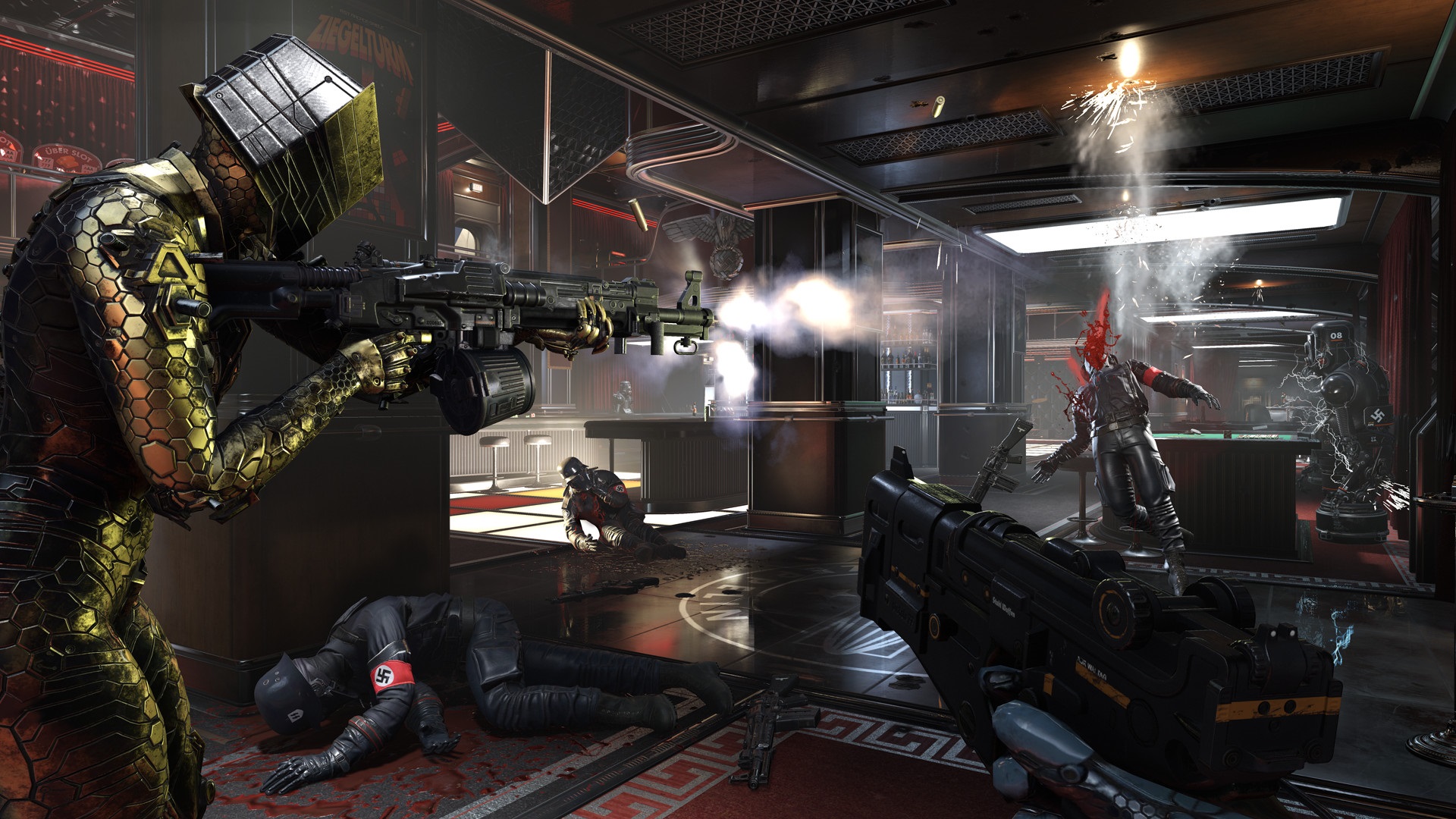 Both Jess and Sophia come equipped with suits of armor that can be fully customized with additional abilities. For example, one ability would allow one sister to camouflage themselves completely. Another ability vastly increased their strength. Players can’t equip their character with all the abilities, which makes teamwork imperative before heading into battle. The girls can also revive each other when down, which is useful in some of the more frustrating sections of the game.

Don’t think that the addition of co-op makes Wolfenstein: Youngblood easy. While it’s great to bring a friend on the adventure, the game still puts forth a mighty challenge. Take General Winkler, the final boss of the demo. Like the sisters, Winkler too had a power suit that rendered him invisible. He also utilized a powerful laser cannon capable of melting certain pieces of cover. To defeat him, both sisters needed to break his armor before they could touch his health. At the same time, Winkler would use his abilities and weapons to force the sisters out of cover and into the open. Eventually, he was defeated and faced a particularly brutal death by a turbine. 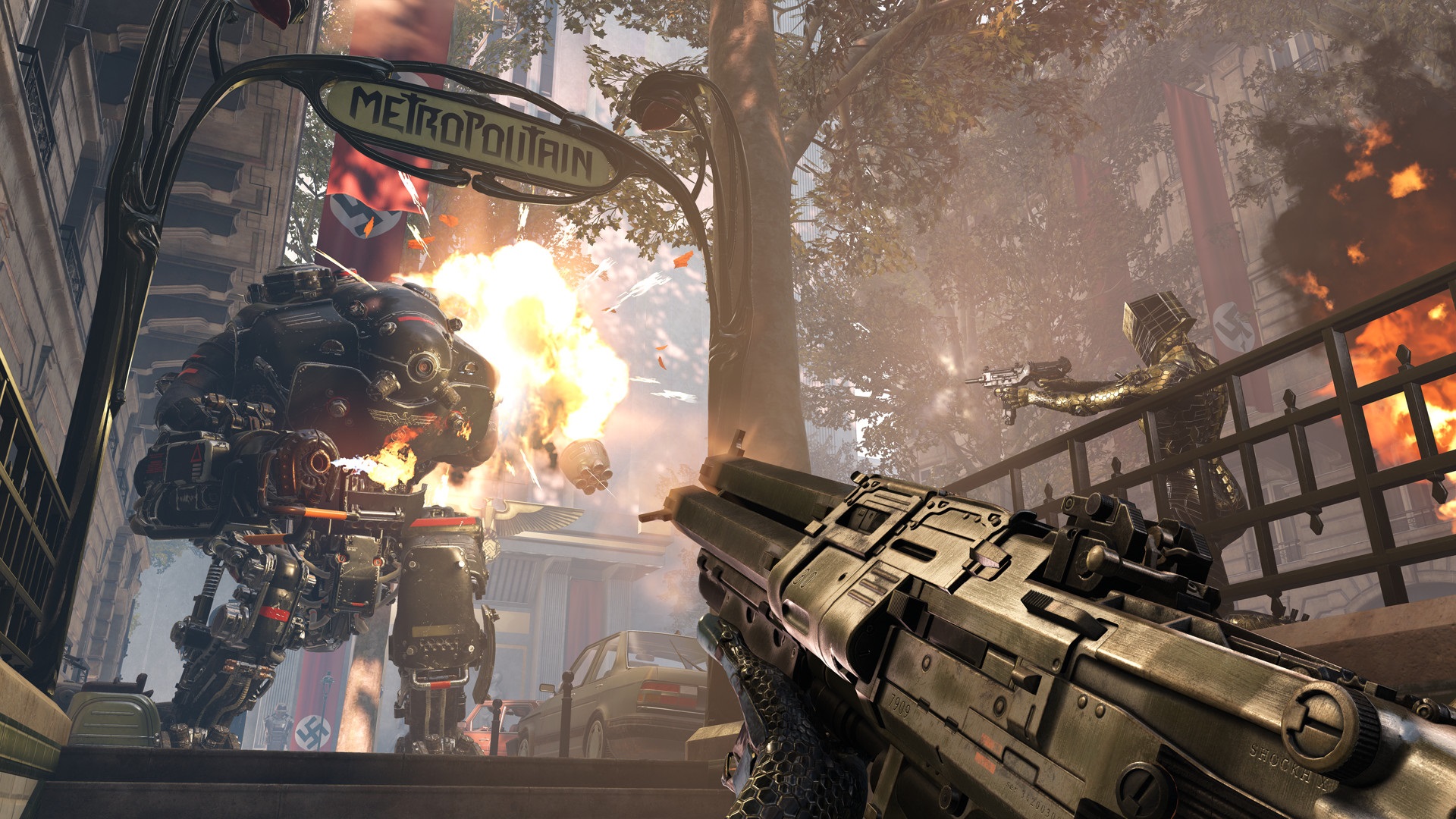 While co-op could have derailed the game, Wolfenstein: Youngblood makes it feel like a natural addition. The level was spacious enough to accommodate both sisters and different playstyles, and it’ll likely be the most linear level in the game. MachineGames confirmed that, following this mission, the game opens up. Unfortunately, you can’t just play the game as one sister. While the campaign can be beaten as a single player, AI will control the other sister. Those looking for a true solo experience like with the previous games will be left disappointed. It’s also concerning how buggy our demo was. Models would disappear when performing a takedown. When they didn’t, the other player would see their sister in a T-pose. Objective markers wouldn’t appear with their assigned objective. For a game that launches in a month, Youngblood needs some more polishing before it’s ready for primetime.

Despite the addition of co-op, Youngblood fits in well with the other entries in the series. Sophia and Jess add a sense of levity to a franchise that’s always taken itself so seriously. The new mechanics justify the co-op, which doesn’t undercut the game’s difficulty. There may be a few visual bugs and glitches, but nothing MachineGames can’t smooth out ahead of launch. Wolfenstein: Youngblood is shaping up to be another fun, Nazi-slaying adventure.

Wolfenstein: Youngblood is out July 26 on PS4, Xbox One, PC and Switch.