Call me lazy, but being a spoiled deity idling life away in luxury beyond the realm of mortals sounds like a pretty sweet gig. This is reality for Sakuna, a spoiled harvest goddess who can enjoy such a hedonistic existence thanks to her late parents, a warrior god and harvest goddess. Yes, Sakuna is living the sweet life, until a bandit chase takes an odd turn and leads people off a cliff where a bridge appears between the Lowly Realm and the realm of the gods. Commotion ensues, irritating the celestial ruler who banishes Sakuna to Hinoe Island, situated at the border of the heaves and earth. Sakuna now finds herself in a predicament where she must battle the elements and monsters of the land while cultivating the soil. The humans that have been banished with her welcome her into their village, as they all seek to rediscover a purpose for existing in their new environment.

Sakuna: Of Rice and Ruin is a love letter to action platforming games and an interesting take on Japanese mythology. In talking to the two-person development team, Sakuna: Of Rice and Ruin is not based on any specific Japanese myths or folklore, but is influenced by them, bringing into several elements to create a unique world for the player to explore. This title is one that does a bit of genre blending to make for a richer overall experience. Part of this is an action platformer, the other is a farming simulation, which brings back some memories of Actraiser. 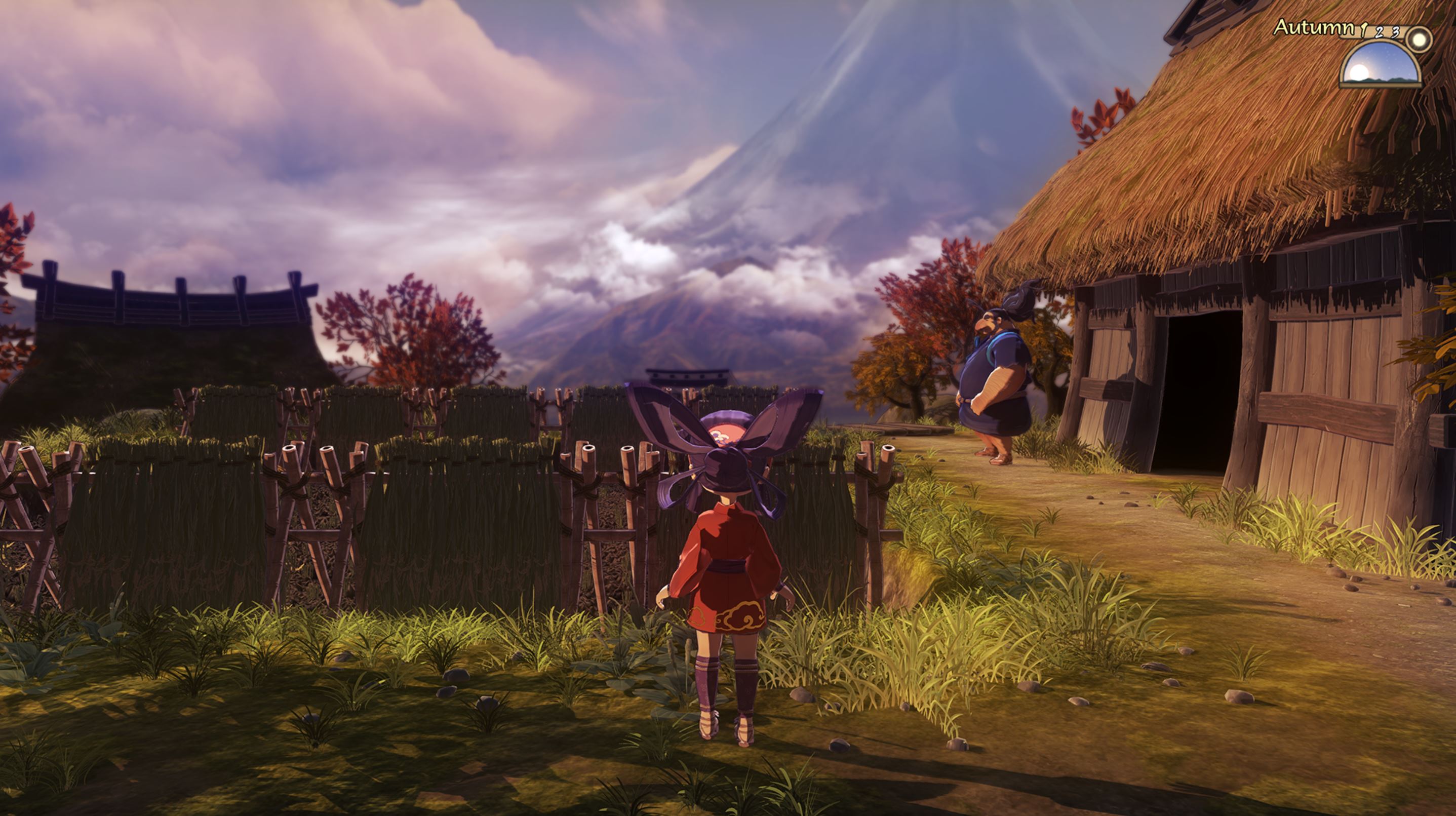 The action portions of Sakuna: Of Rice and Ruin are what we’ve seen the most of, and from the couple levels we’ve seen on a couple occasions this looks like it succeeds in paying homage to the 8-bit and 16-bit titles during the golden age of platforming. The mountainous regions Sakuna must travel through are filled with environmental dangers, vicious enemies and gigantic animal demons for boss battles. Sakuna is equipped with a divine raiment, which essentially is a long scarf she can use to grapple onto distant platforms or use to fight enemies, chaining together combos of weak, strong and special attacks. The gameplay is classic 2D platforming but the visuals are modern with a creative and aesthetically-pleasing art direction.

Running and jumping through mountains fighting demons can wear even a goddess out, so in between these ventures Sakuna can tend to the village. The perspective shifts to 3D, where Sakuna can farm rice, cook food and craft weapons. This is the hub where players can further develop Sakuna and build relationships with the other villagers. The time she spends here will help her learn her place in her new community, along with what can do to heal the exiled humans’ souls. Cooking and eating meals with the other villagers seems like an ideal time to get to know them and bond. The platforming action is what initially drew us to Sakuna: Of Rice and Ruin, but this section of the game has us intrigued that there may be deeper story elements than our first impression suggested. 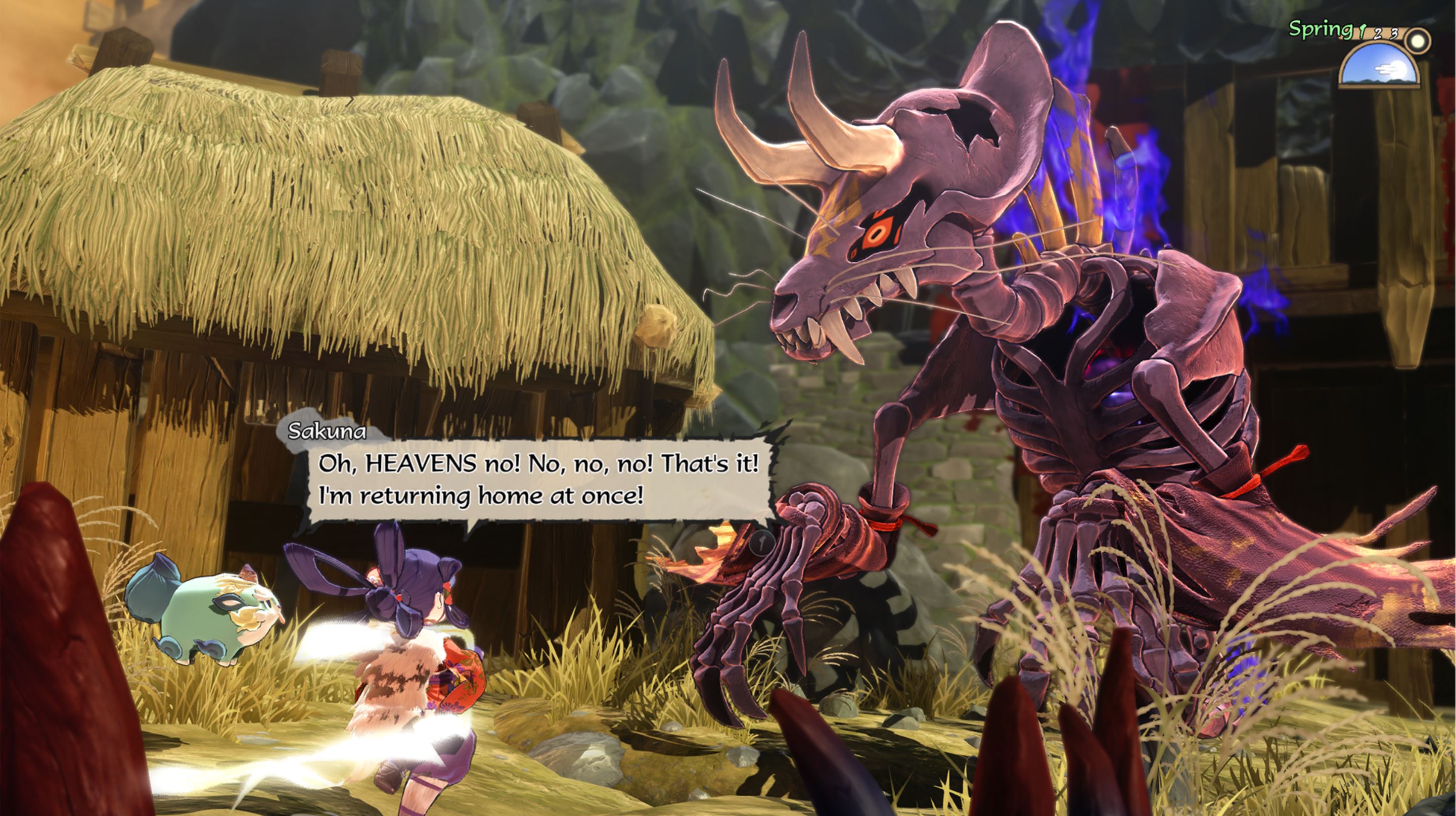 Sakuna: Of Rice and Ruin is scheduled for a winter release for PC, PlayStation 4 and Switch. From what we’ve played the platforming action is solid and any 2D action fan should check this out, but the farming simulation component and storytelling in the village looks to set this title apart from the others.