A change in game genre is never an easy decision nor transition alike. Least of all to fans of said series who have gotten used to an established mode or motif running throughout. Sure, some can pull it off better than others, and in rarer circumstances, all you need is the blessing of a beloved IP to make anything work. How else could Mario convince that party boards, sports and cross-over XCOM-style RPGs with freak-rabbits are worthy of your time? For less-popular, less-established but still respected series, such as Darksiders — now one of THQ Nordic’s many prized assets amid their growing dominance in the AA sphere — the peculiar shift in circumstances is just as profound and as unexpected as it would be for anything else. It may have been expecting too much for a new Darksiders title, in a similar vain to its ilk via a full 3D overworld in little over a year, but there’s no getting away from the creeping suspicions that an overhead, dungeon-crawling style take on the series this time round may not be the best fit for something established more on its intriguing mix of combat and Zelda-like exploration.

Texas-based Airship Syndicate seem like a good fit from the outset. After all, the studio was established by former members of Vigil Games — the very developer that gave us Darksiders in the first place — and with previous title Battle Chasers: Nightwar managing to weave together dungeon-crawling and turn-based RPG combat, the pedigree does at least seem competent enough to know how to translate a property from one form to the next. From early impressions, Darksiders Genesis — a prequel to the entire series — doesn’t appear to tamper too much with the already-established base. To set the scene: Darksiders Genesis pits players in control of two of the four series-central Horsemen — War, returning from the 2010 original, and Strife, introduced as the fourth and final member of the quartet following War, Death and Fury respectively. 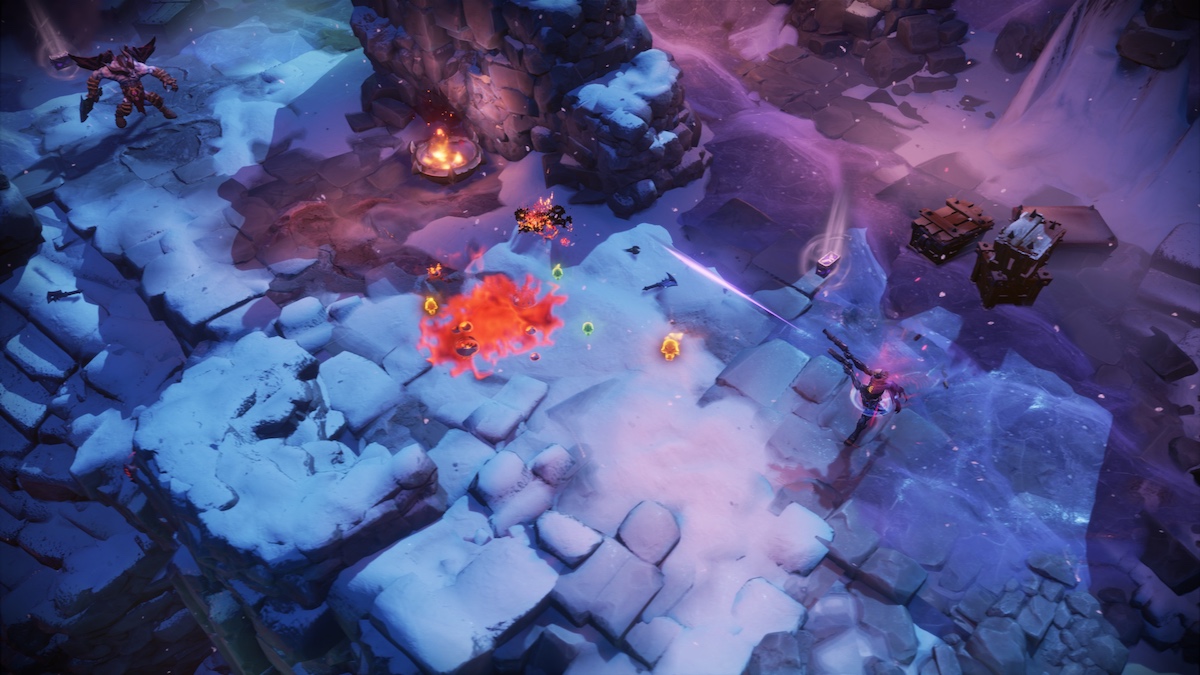 For anyone who’s played a Diablo-like or other such fantasy-orientated, overhead, dungeon-crawlers that aren’t too afraid to get a little flashy and grand, Darksiders Genesis replicates a fair amount of that formula in that players must make their way through a series of linear-set stages. Even if that does potentially land the game in a awkward spot of, visually and aesthetically, sporting an all-too-familiar fantasy dressing that seems to (at least what was shown) discard any semblance away from such cliched surroundings that the series previously wasn’t afraid to compliment. Structurally, the progression through the game follows that an end-level boss of sorts closes off each chapter with a grander main boss closing that particular section or chunk of the campaign. While bosses pitted at the end of stand-alone levels merely play out as beefed-up variants on smaller grunts, the “main” bosses do fortunately present a bit more of a challenge and shake-up from what players have, up to that point, experienced and perhaps gotten used to.

In terms of story, with most of the perspective left to loom over the world of Genesis, the game instead reverts to comic book-styled frames that serve as the go-to for cutscenes — overlaid dialogue and exchanges between War and Strife filling out the remaining expository details, complete with occasional moments of potential/hopeful comedy to reflect the two horsemen’s conflict of personality. War, the stern, stoic, conserved warrior-type with Strife attempting to fill the role of that more flattering, light-hearted joker of the bunch. The intent, in the context of gameplay, is to present War and Strife as two forces of differing strengths — War more efficient at shorter-range melee attacks and area-of-effect damage, with Strife gaining an upper hand with longer-range firepower and quicker nimbler strikes alongside. It’s here where Strife’s presence in Darksiders Genesis begins to open up as one that isn’t simply plot-orientated. 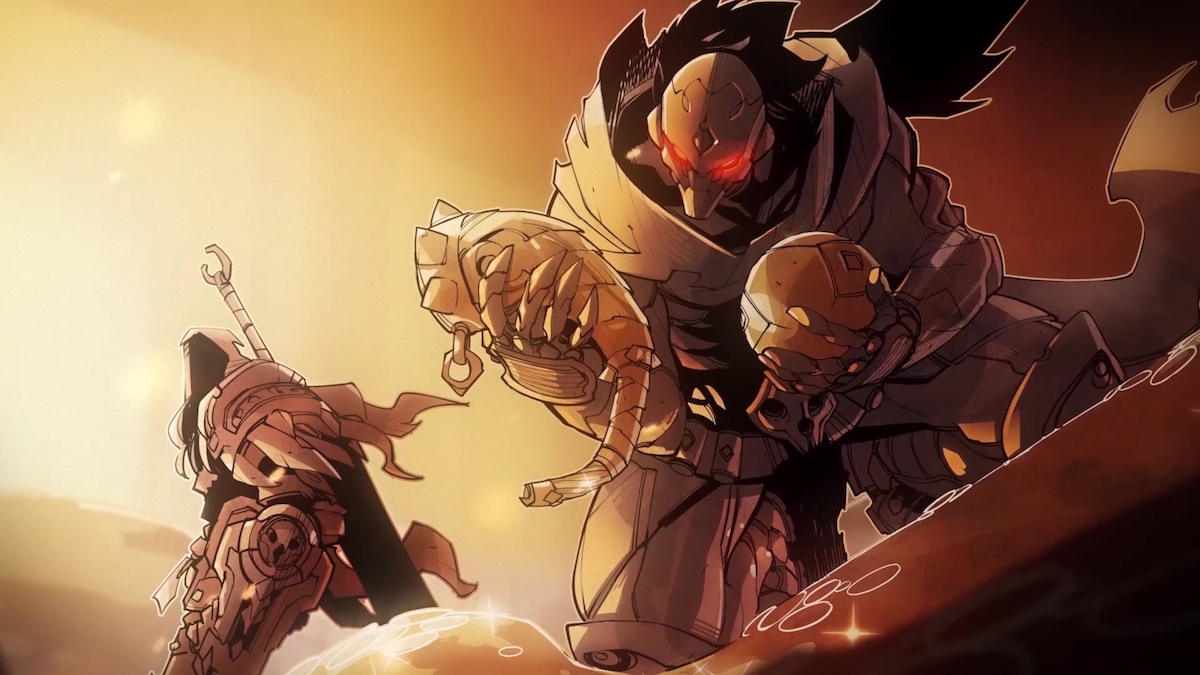 While much of War’s move-set and controls translate sufficiently well into the game, it’s Strife where a lot more potential and variety lays. While it’s hard to really determine the major differences in the character’s arsenal — and how bullets of one color or shade are different to those of another, based solely on the hands-off demo presented — needless to say Strife’s focus on speed and versatility are perhaps where most players will lean towards. Particularly when boss battles particularly can quickly lean into tricky little instances of bullet-hell dodging and clearing out as many small-frys as quickly as possible.

One of the key elements the developers have implemented here — and one, you can assume, they hope players will engage in — is the ease at which players can instantly shift between controlling either of the two playable horsemen. While co-op will be an option in Darksiders Genesis, for those tackling the campaign solo, players will always be controlling one character. Should you decide to swap, it’s as simple as a tap of the button. The idea is that the mixture of enemy types and scenarios put before the player will require them to master both characters’ potential strengths and weaknesses. In the case of puzzles and situations that require unlocking something to progress, the developers assure that there won’t be scenarios where both characters must be controlled, but insist that hints and subtle nods towards the solution remain tucked away. 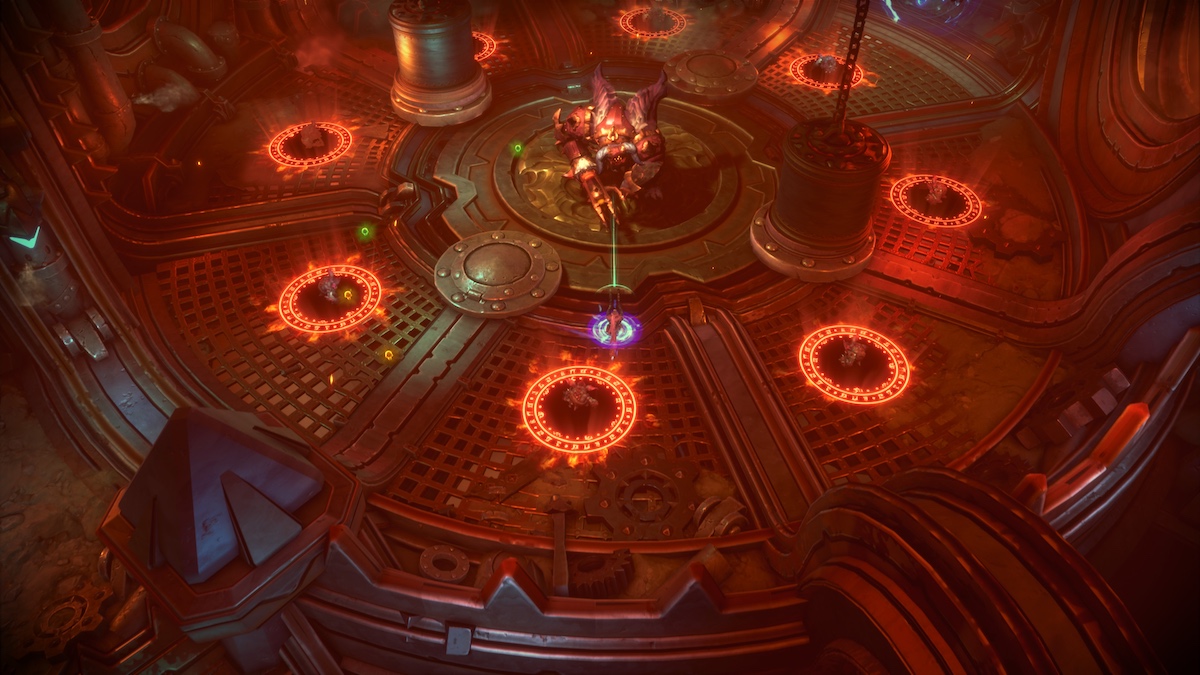 Though the developers may tease that the prequel will inevitably end with some manner of lead-in to the events of the original game, it’s clear that many an idea and concept from differing genres are at the center of Darksiders Genesis‘ identity and hopeful appeal alike here. No doubt there will be some fans of the series who will be startled by the game’s distancing itself from the 3D, action-adventure roots, but that’s not to say that the overhead, dungeon-crawler direction lacks a degree of appeal. Though its presentation — namely the manner at which its story, its characters and its world-building — may end up intentionally restricted to fit the overhead view of proceedings, Darksiders Genesis‘ gameplay could be where the prequel finds its brightest spot. We finally have the identity of our fourth horsemen, and funnily enough, he may in fact hold the key to the game’s general success.