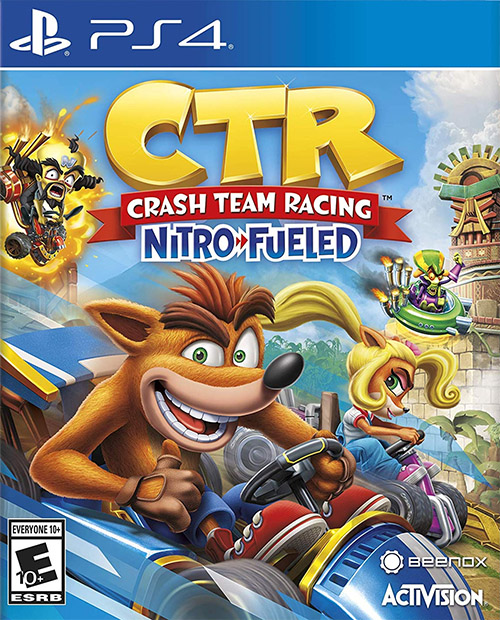 Back in 1998, up and coming studio Naughty Dog had wrapped up the third entry in their highly popular Crash Bandicoot series, as the titular orange creature continued his rise in popularity to become one of the original PlayStation’s signature mascots. Before the American studio decided to move onto their next IP, the team had one last idea for a send-off for their biggest franchise at the time: an arcade racing title to compete with the freshly-released Mario Kart 64. The following year, Crash Team Racing was released to the public with a roster of fifteen characters and eighteen tracks, with an emphasis on keeping momentum through power slides and well-timed jumps. Over the following years, two additional racing titles based around the Bandicoot and his allies and enemies were released with middling receptions, but many fans of the franchise cite the original racing title as not only the best in the series, but an arcade racer that can stand head and shoulders with some of the most well-regarded in the genre. Now, nearly fifteen years after its last entry, Activision is looking to capitalize on the success of the Crash Bandicoot N. Sane Trilogy with another remake from the fifth generation of consoles, Crash Team Racing Nitro-Fueled. Featuring an expanded adventure mode, impressively-detailed recreations of tracks, well-tuned and chaotic racing gameplay and extensive customization options, Crash Team Racing Nitro Fueled is a fun and faithful aggregation of some of the strongest elements from the arcade racing series.

At the heart of Crash Team Racing Nitro-Fueled is its iconic racing, which relies on corner cutting and creative item usage to fully master. Despite offering dozens of kart customization options, only the player’s character choice, spread across three classes of difficulties and varying levels of speed, acceleration and turn, affects the stats of their racer. While speed and acceleration each have clear advantages within a race, turn might arguably be the most important of the three, as even average characters can experience significant slowdowns while making relatively slight turns. The tracks offer various opportunities to avoid these declines in speed, with a simple press of L1 or R1, which activates a jump that can turn into drifting while held down. Jumping at the highest point of a ramp or hill can provide a boost upon landing, with the boost increasing depending on the height of the leap. Additionally, pressing the L1 or R1 button at the right time while holding the other button can provide up to three small but useful boosts while attempting to return to the straightaways as quickly as possible. The resulting races feel unique and turbulent each time around, as players continue to master the quickest route possible while also dealing with opponents and track obstacles.

Meanwhile, items spread throughout the track can be compared easily to Mario Kart counterparts, but the presence of collectible wumpa fruit can not only increase the player’s speed, but juice up the power of acquired items, causing additional damage or adding length to an item’s impact on yourself and your opponents. Even more powerful versions of items can still occasionally feel lackluster, however, as the momentum of players is rarely fully stopped, with the collision with certain items still sending the player a significant amount forward, keeping those in the lead still a notable distance ahead. This disheartening nature is only further amplified by the truly randomized nature of item acquirement. Instead of prioritizing droppable items for the players near the front and providing the more powerful items for the players lagging behind like other arcade racers, the crates seemingly reward the player with any possible item, which is promising in principle but makes it truly difficult for those in the back to attempt to catch up, making it hard to feel motivated to continue playing when the gap between first and last only extends as the race goes on. 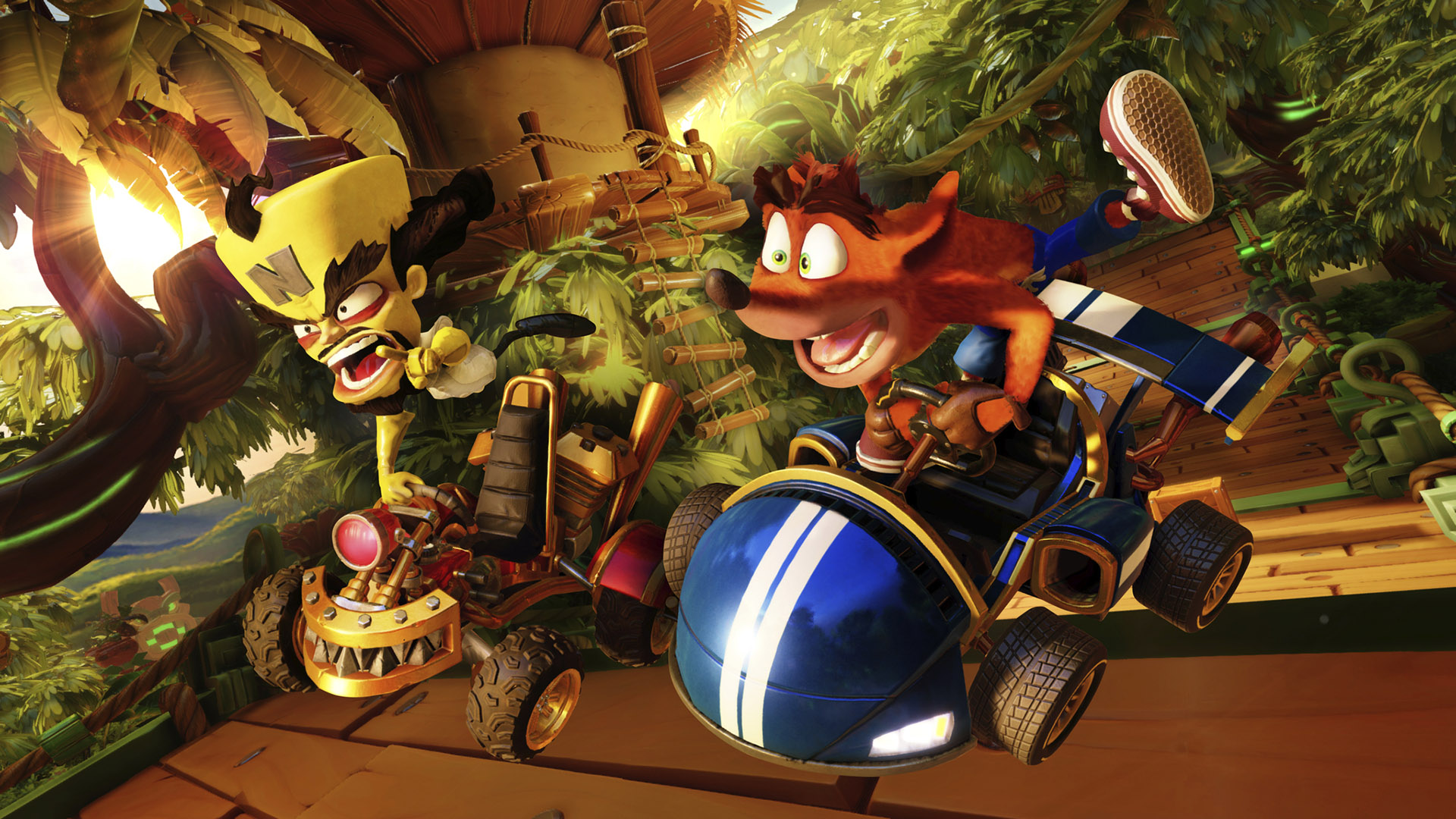 Fortunately, Crash Team Racing offers plenty of tracks to compete on, with the team at Beenox taking the most creative liberties in the construction of over thirty arenas from both the original game and 2003’s Crash Nitro Kart. Although plenty of elements from the PlayStation title still hold up, many of the courses are thematically interesting but noticeably empty, lacking details that made the environments feel like simple backdrops. Nitro-Fueled fully revitalizes these slices of the Crash Bandicoot universe, adding life through the usage of goofy characters that interact with one another in the background, and fitting atmospheres that enhance each map, from the bright colors of Papu Pyramid to the creepy and egomaniacal vibes of Cortex Castle. Nostalgic players can also activate legacy music through the options, featuring the original soundtrack in its entirety, although the updated music still does a solid job of maintaining the original’s spirit across the wide variety of tracks.

The adventure mode makes its return with a classic option faithful to the original game and a Nitro-Fueled option that allows for character and kart swaps and customization throughout the campaign. Featuring a handful of jovially-animated cutscenes with fittingly-cheesy writing, the adventure mode sees the inhabitants of the Crash Bandicoot universe racing against one another in sixteen of the original tracks to see who deserves to compete against Nitrous Oxide and stop him from turning their planet into a giant parking lot. With a hub world that serves as an empty but neat way to keep the portals between the sixteen tracks grouped up and interconnected, the adventure mode serves as the title’s biggest opportunity to unlock a solid portion of the roster and customization options through boss battles, crystal challenges and additional race types. The five bosses, each with their own set of infinite items, offer intense one-on-one duels that often come down to the wire, while crystal challenges task players with collecting twenty crystals in a set time limit. Plus, each of the sixteen races offer two additional replayable options that require better memorization of the maps, with relic races put a unique spin on time trials with time-pausing crates, and CTR challenges force players to track down the tree titular letters while also attempting to outrace their opponents. Despite some occasional random difficulty spikes and a disappointing lack of Nitro Kart courses, the adventure mode serves as the highlight of the offerings in Crash Team Racing Nitro-Fueled with nearly every race or challenge rewarding the player with at least one new customization option. 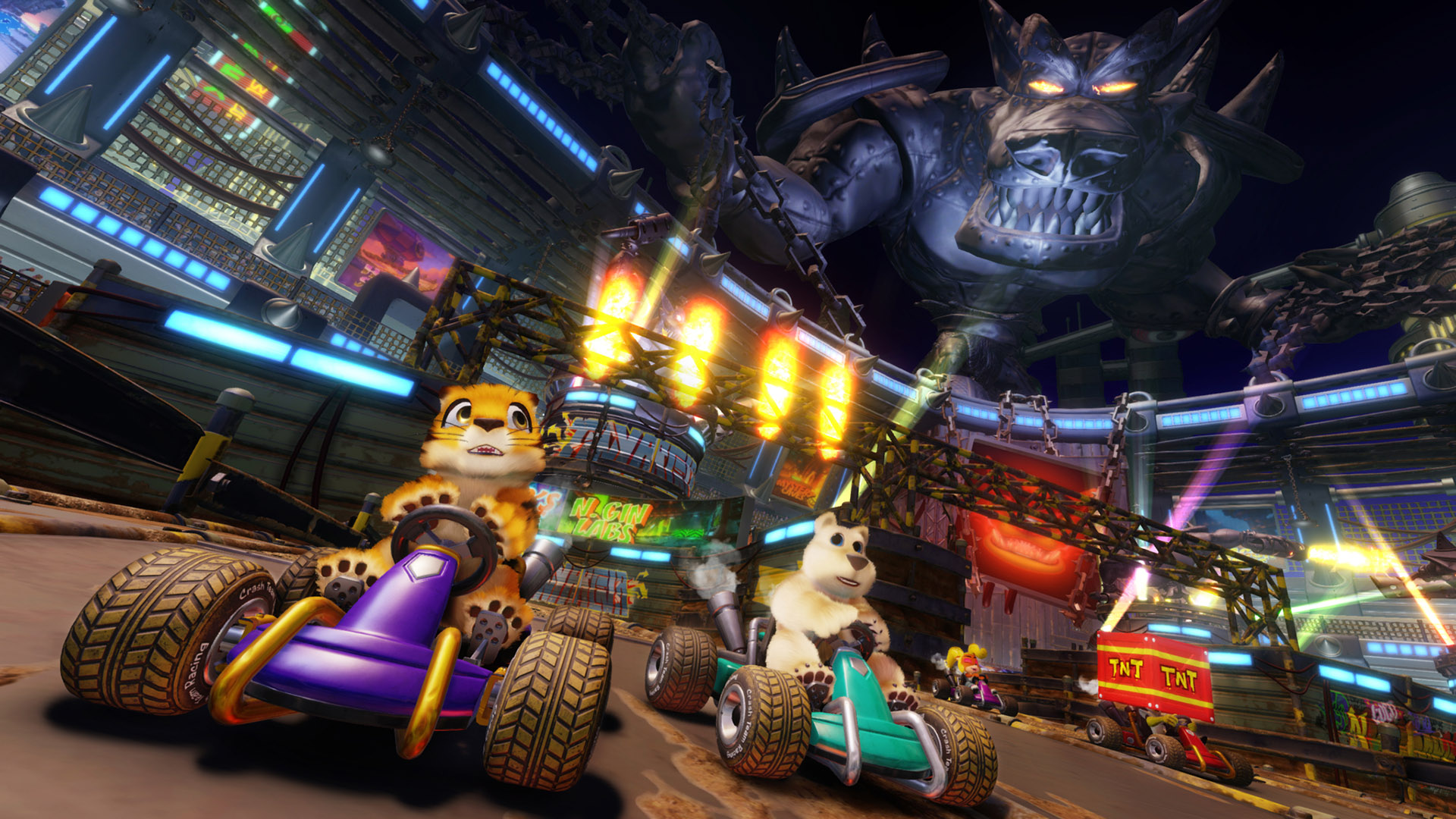 The local arcade provides access to each of the above race types, as well as cups that group four races together and battle modes, with five different ways to challenge AI and/or human opponents in item-filled arenas. From simply taking down opponents alone or in teams, or attempting to obtain flags or crystals from other players, battles are a relatively simple but enjoyable diversion from the bevy of races that the game prioritizes across its other modes. Without indicators that alert the player when they have successfully hit another racer, or on-screen UI that shows how close your allies and opponents are to success or failure, it’s hard to stay invested in many of these competitions beyond the simple joy of completing the task and disrupting the progress of your friends or strangers. There’s also no clear way to choose which team players are interested in participating in, leading to unfair balancing that can bring a serious damper before a potential battle even gets underway.

While a significant portion of the characters, karts and customization options can be unlocked through the adventure mode or time trials, a decent amount are also restricted to the pit stop, where players can spend their hard-earned wumpa coins on individual prizes or bundles. There’s no randomized elements to the shop, as the game makes it clear exactly what you are buying and for how much, and there is no way at launch for players to spend real world money in the game. The biggest hamper for the pit stop is progression, however, as an average solo race only nets players twenty to sixty coins depending on difficulty and final positioning, while the items in the shop can range from one thousand to several thousand coins. Online races and battles are more generous with their reward, but have measures in place to prevent players from grinding for coins without actually playing. The rewards of the pit stop are also directly tied to an online connection, so players who disconnect from the servers lose access to all of their purchased skins and karts, while offline players will never get the opportunity to unlock them in the first place.

Despite one crash and a few brief stutters that didn’t affect race progress, Crash Team Racing Nitro-Fueled runs mostly well from a single player and local multiplayer perspective. Our time online, however, has not been as promising so far. Although it should be noted that the majority of the time spent online was on the usually server-stressing first day of launch, there was a decent amount of lag visible by other players when they attempted to shoot or drop items, which made battles more challenging than usual. The scope of what is available for online matches is much more limited as well, with only standard races and random battles being available at launch, with the wait period between each match being surprisingly lengthy considering the amount of actual gameplay. Still, the promise of an endless amount of eight-player Crash Team Racing is fully viable in the near future, which will entice the die-hard fans that can look past the few bumps in the road along the way to this vision. 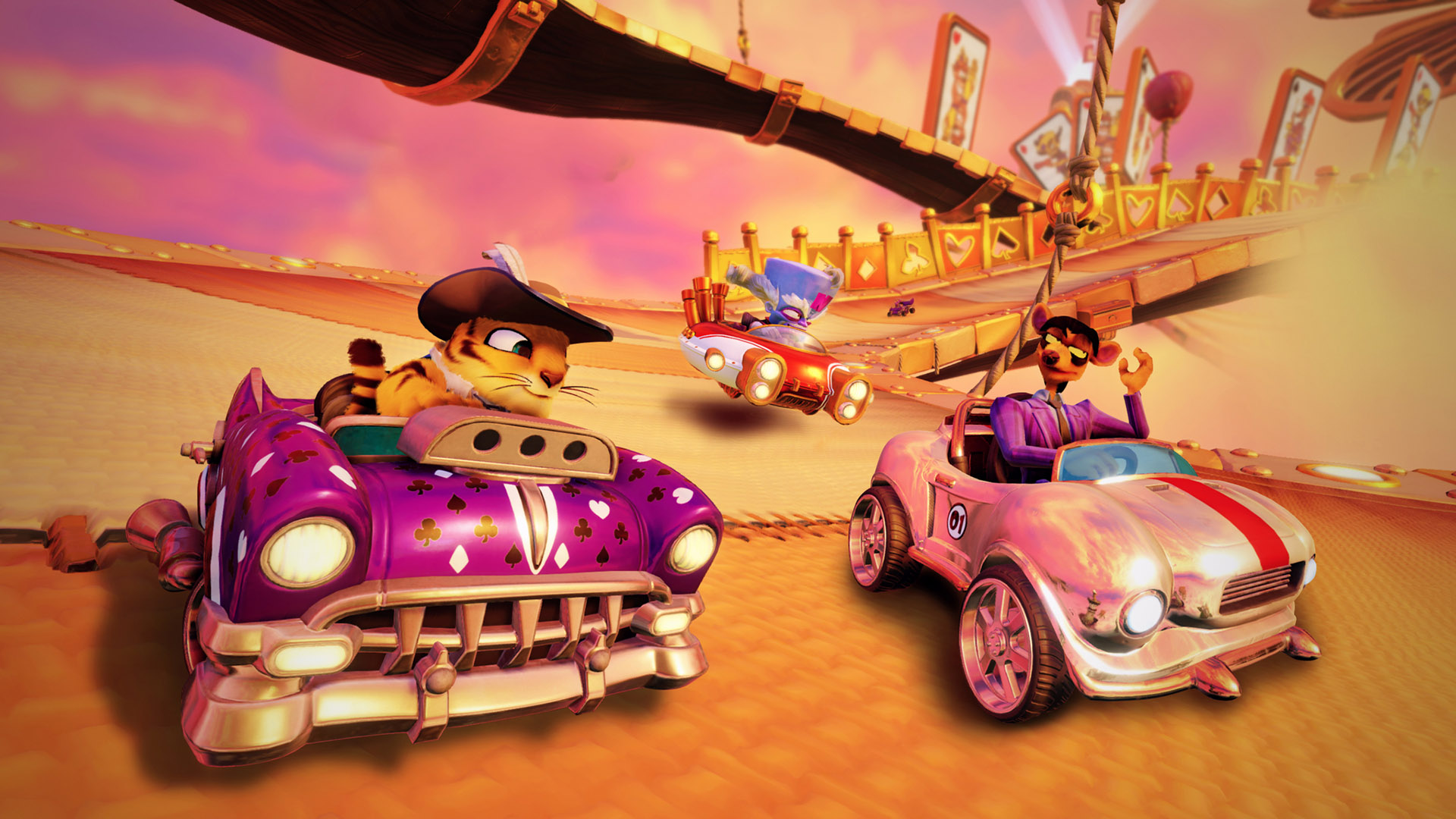 Crash Team Racing Nitro-Fueled is an unexpectedly ambitious remaster that puts a fresh coat of paint on the accessible and deep kart racer. With a robust adventure mode that serves as a great introduction for new players and a welcome challenge for veterans, plus a varied roster of characters and tracks that feel just as vibrant and detailed as the remaster of the Crash trilogy, the title is more than capable of appealing to players of all skill levels. Not every aspect of the game shines brightly, as a lacking battle mode, overly-lengthy progression and a rough online launch put a damper on the bandicoot’s return to racing. Thankfully, the core gameplay is as strong now as it was nearly twenty years ago, opening the door for plenty of hours of arcade racing fun that serves as a welcome reminder of the past and a new path ahead for the future of the series.