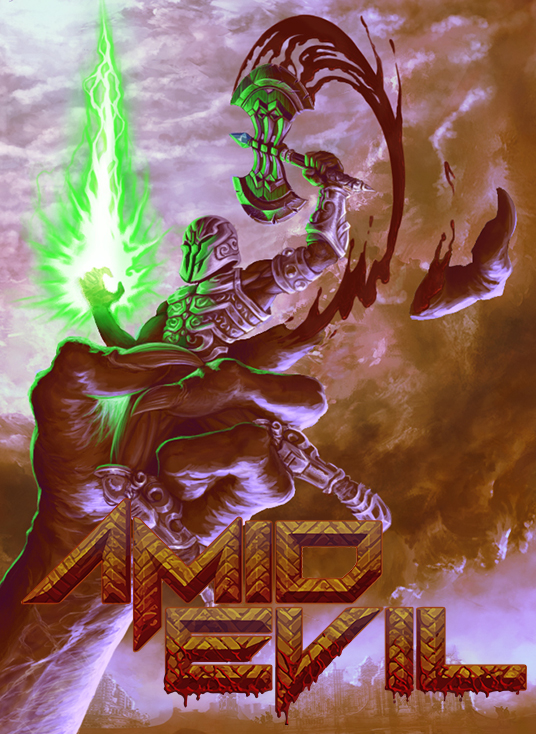 Magical realms are a bad idea.  The process goes — Step 1) Magical Realm.  Step 2) There is no Step 2 because it’s already been taken over by an evil that will reign for a thousand years or more.  Given enough time a chosen one will come along to send the evil packing, but maybe it would have been better to pass on the whole Magic thing so when it all goes horribly wrong the suffering is relegated to a single kingdom instead of multiple worlds.  The lands of Amid Evil have been overrun by corruption, but the potential Champion has finally won the mystic axe that allows him to travel between realms.  It’s not the deepest plot ever applied to a game, but like Doom‘s “space marine journeys into Hell,” it gets the job done.  Amid Evil has too many other things to do to get bogged down with story, like packing multiple distinct worlds with tons of monsters rampaging through well-designed levels.

Amid Evil is an action-FPS that’s equal parts Quake and Heretic, which basically means that moments of pure arcade first-person shooting are broken up by the hunt for secrets.  The initial starting area is a ruin with paths to Easy/Medium/Hard difficulties, and in classic Quake-style fashion there’s a fourth Evil difficulty hidden in the central hub area.  The hub has gateways to each of the seven worlds, once you unlock them all, and each world is a series of four levels with the last one being a boss fight.  Each world is also wonderfully unique in terms of art, monsters and level design.

Astral Equinox, the first set of levels, takes place in a series of dark churches and temples.  Starting off an a platform overlooking a small lake with a church on the opposite side, the first secret is on a ledge right below.  It’s easy to miss because the default run speed is fast, and that first secret is nothing more than a nice chunk of blue mana that acts as ammo for the first staff, but it sets the tone for the levels to come because you need to look everywhere and then double check again, just in case.

After collecting the mana it’s time to go swimming, and while the water is nice to land in, it wouldn’t have mattered if the surface was solid concrete because there’s no fall damage.  A quick swim to the path to the church brings up the first enemies, orange and green melee attackers who are easily dispatched with the axe.  Inside the church are two passages to the left and right plus a door locked by gold and silver keys, and this is where the level design starts up properly.  The passages twist and turn about each other, connecting in unexpected ways, with each new room being its own set piece.  A plain square room has an arched crypt to its right, leading to an unfinished stone passageway that ends in a switch.  The switch turns the the square room’s floor into a zig-zagging staircase leading to a giant arched waterway, which feeds into a huge cave featuring an undergound river.  Keeping to the path finishes the route to the first key, while hopping the railing switches course to the other key.

Whichever route you take involves plenty of combat, letting you get a feel for the staff, and if you kept an eye out for secrets, realizing that the flying green force-slash from the sword counters the ranged slicing attack of the blue enemies.  Eventually you get both keys and the center route takes you on a raised bridge high above the underground river, leading to a giant circular room where a series of switches in its branching passages raises the pattern in the floor to act as a bridge to the next section until, finally, an elevator takes you into the light of day and level’s end.  Along the way you meet the spiked bomb throwers, flying angel-knights, plus a tall knight who shoots a line of fireballs.  While the enemies for the rest of this world’s levels will be the same, nowhere else in the entire game will look anything like it. 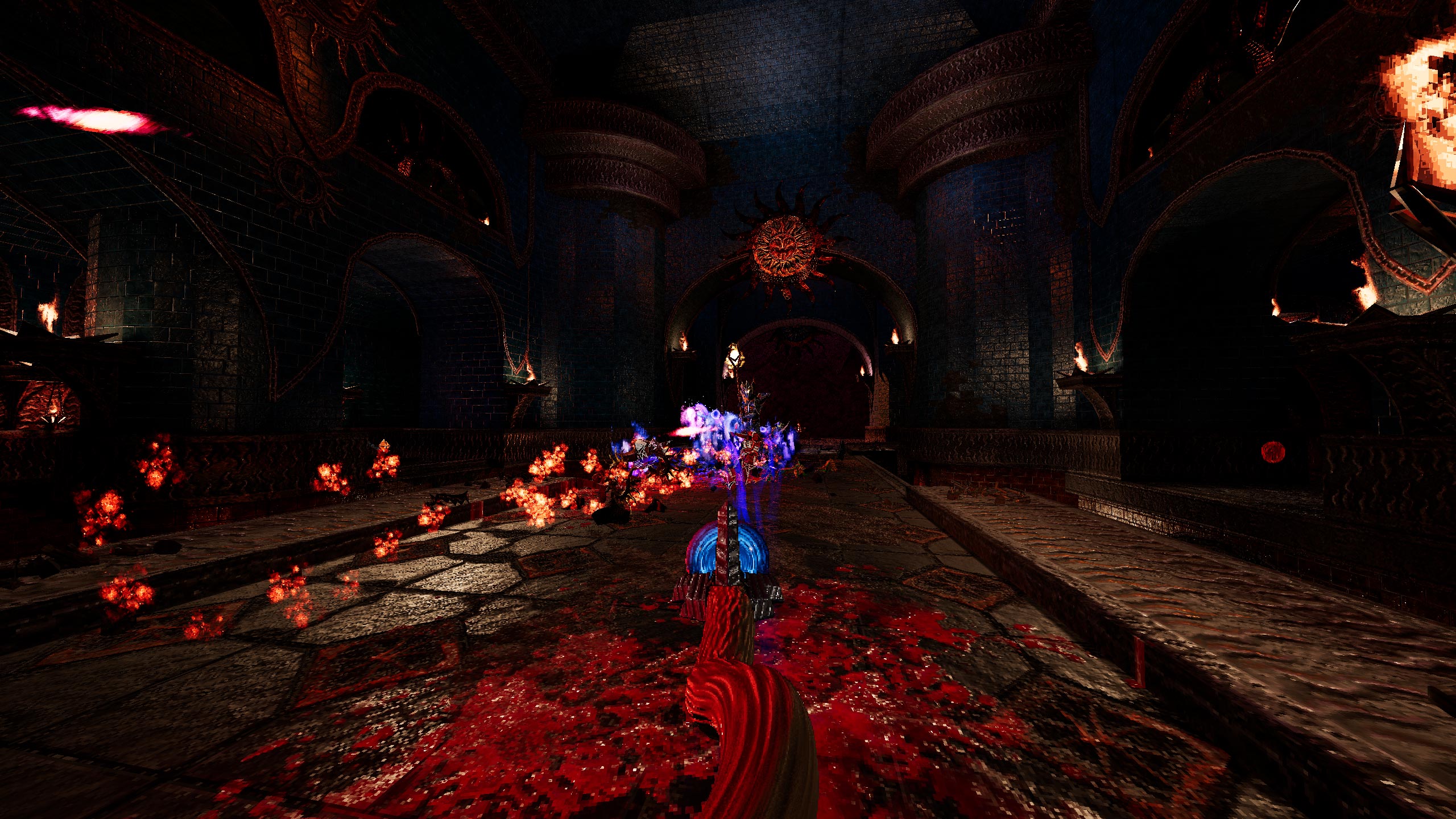 Once you’ve played a level you can recognize where you are almost instantly if you were dropped into a random section.  The underground crypt-canyon leading to sunny temple ruins and ending up in the courtyard leading to the inside of a massive pyramid is nothing like the gloomy lighting and industrial design of The Forge.  Neither of which are anything like the bright sunset illuminating the mountain aerie, while the multi-eyeballed enemies of the Domain of the Sentinels are completely distinct from the shadow-beasts of The Void.  While on the one hand that latter point means each world has fewer enemy types overall, the “three levels and a boss fight” setup means they don’t have a chance to get repetitious before the next new area opens up with a new selection of attackers.

The enemy waves aren’t shy about attacking in crowds, and while it’s not Serious Sam-style mobs, they’re still tough enough to put up a good fight.  This, of course, requires a strong arsenal to counteract, and while the weapons of Amid Evil are all magic, they’re roughly similar to the standard FPS loadout.  The mace shoots a cluster of spikes, turning enemies into pincushions before the final strike sends them flying and impaled against the wall, but it’s still basically a shotgun.  The antler-like wand that shoots exploding planets(!) is a bazooka, the lightning-trident is a combination sniper rifle/chaingun, etc.  Even the twisty ribbon-weapon is basically a BFG-9000, shooting out a purple ball of force that zaps anything in its range, but the weapons also have their own twists to set them apart.  Electrocuting a creature with the trident can cause a crack of thunder as lightning jumps to nearby enemies, and even the relatively weak homing-ball staff is useful in the right situation.  Destroyed monsters leave behind glowing remnants that fill in the soul gauge, which when full allows you to trigger a short period of serious weapon overdrive.  The planet-wand shoots suns, the mace’s spikes are much faster and stronger with a slight homing ability, and anything in your sights is unlikely to survive long.  The trick is to know when to hold on for later or when to let loose, but there are enough enemies kicking about that it’s not too hard to make up for a wasted Soul Mode. 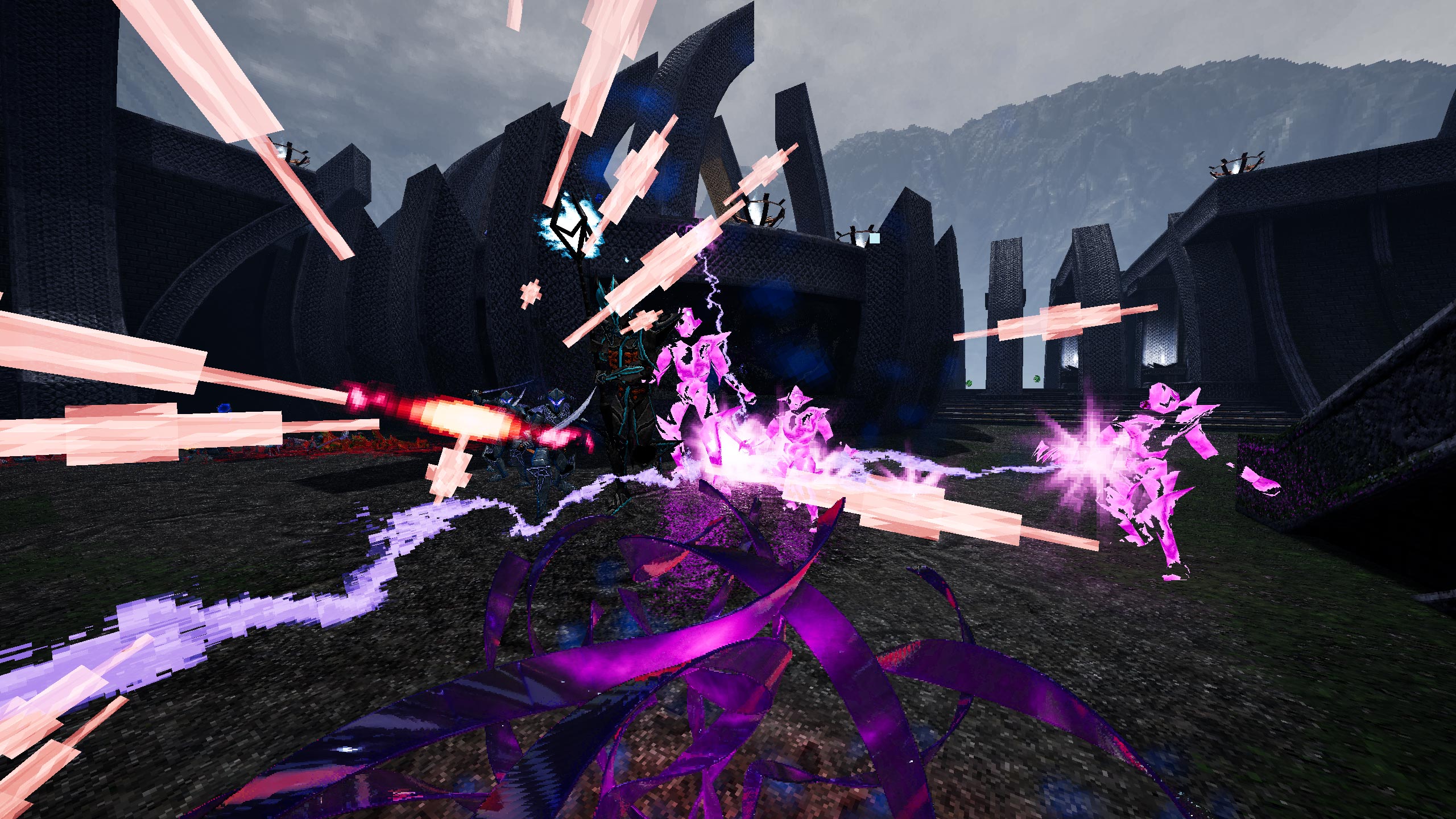 Amid Evil is a fantastic arcade-style FPS, fast and stocked with weapons that provide a satisfying impact.  The variety in its levels is simply fantastic and the secrets hidden everywhere give plenty of reason to hang around after the fight is over to thoroughly explore every nook and cranny.  While it’s got a low-poly throwback look with chunky textures and 2D sprites for pickups, it looks great in motion, fast and smooth and wonderfully detailed.  There’s even a cheat menu in the Codex, accessible from the menu at any time, for anyone wanting play on their own terms or just fly around to soak up the atmosphere.  Amid Evil does everything possible to let the player have a blast in the intricate landscapes of its mystical realms, tearing through a paper-thin quest to exterminate the corruption of the land while tackling the more important task battling and exploring every square inch of the map.