Well, it happened again. The stars aligned, and we game across another pair of indie games in the works with similar concepts that causes you to ponder if there isn’t some weird trend ready to hit. So far in this past year I’ve seen a pair of noir-inspired graphic adventure games set in world populated by anthropomorphic animals, a pair of adventure games where you play as a cab driver that has to solve mysteries by talking with your passengers, and how a pair of PVP first-person shooter games based around time loops. I’m not sure how this happened (and this isn’t even counting Deathloop, though that’s just first-person action for now), but it has, and after playing both games, I’m grateful for the alignment that led to this.

It’s easy to see why the developers — Ratloop Games for Lemnis Gate and NGD Studios for Quantum League, respectively — would gravitate towards such a concept, of course. First-person shooters can be a bit tricky to inject originality into at times and it’s even trickier when trying to come up with a unique angle for a crowded market of PVP shooters. And in a world where an increasing amount of players get dropped into an arena to duke it out, why not shake things up by decreasing the amount of players while finding a way to keep escalating things as the game advances? And allowing a team to be built up while playing over a loop of previous team actions easily provides that. 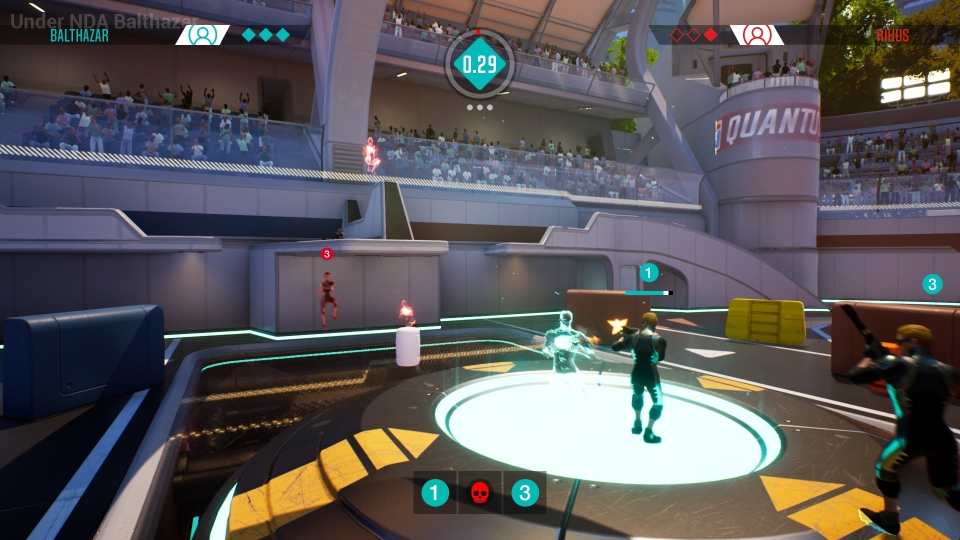 As Quantum League is arguably the simpler title (though no less fun), let’s start there. Setting itself up as a team shooter where the team consists of a single person, the goal is simple: get on the capture point and hold it down for the round. You have less than a minute to do so. After killing your opponent and grabbing the point, it seems easy from there, right? Well, once the time ends, it’s time to restart the loop, this time players controlling different versions of themselves while the previous loop plays out. So now the player falling behind can team up with their past self to try and knock off the current champ, while the opposing team has an extra defense. After three loops, whoever still stands on the point takes it all.

It was enjoyable indeed, helped out by a colorful style that played up the “sporting event” angle. And as expected, the action kept growing with each round rather nicely, getting fun and chaotic by the end. Quantum League also promises more modes later on, complete with 2v2 matches to add to the mayhem. It could arguably benefit from more weapon choices which are also set to come soon. At the beginning of each loop, you select what weapon you want to bring in now, be it pistols, grenade launchers, SMGs, et cetera. Only four weapons were available at the time, though, and more variety could have helped, though each weapon handled nicely. But again, the arsenal is set to expand later on, so we’ll see how that goes. 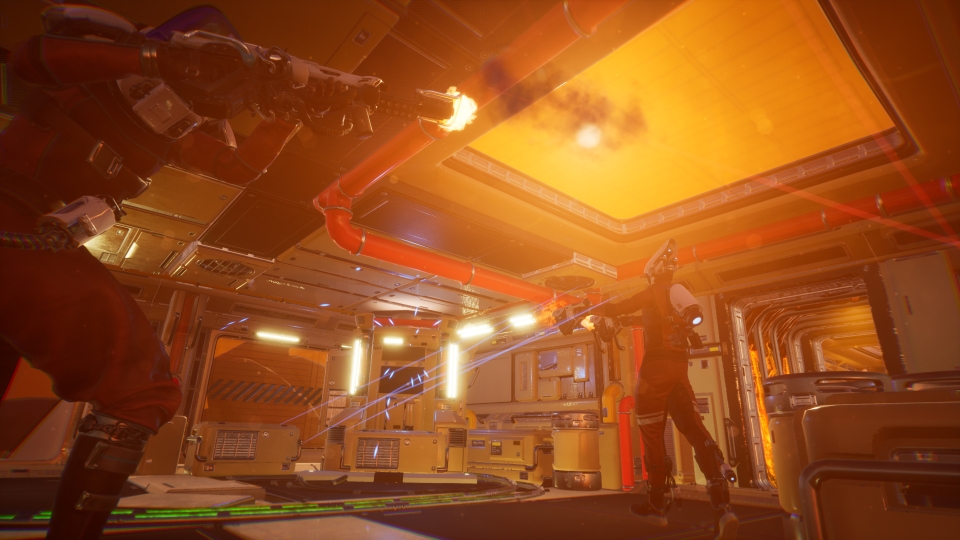 Lemnis Gate, though, is quite the different beast. For one, the aesthetic is notably different. It takes on a more realistic style and a deeper narrative seems to be implied that provides a bigger goal for our teams to fight for. But the biggest divergence is that unlike Quantum League, where each player simultaneously goes against each other during the time loop, Lemnis Gate uniquely takes a turn-based approach. One team is given an objective (such as destroying terminals or machinery, as was the case in our demo) and the other team has to prevent it. You make a move, then the opponent makes a move. Simple enough, right?

Well, the second twist in Lemnis Gate (at least in the mode that was demoed) is that there are seven different classes to choose from, but once you use that class in a loop, you can’t select them again. You may consider leading off with a direct gunner, who can quickly destroy what’s needed for your goal. But then your opponent deploys a class that specializes in poison to kill them while still in their loop and creates a toxic area around the objective. Now you’re down one gunner, so you might want to kill the poisoner to protect them, so on your next turn you deploy a sniper in their own loop, but then your opponent counters with their own sniper, and so forth until both players’ troops are exhausted. So strategy is even more important here, especially as things get nice and chaotic again, requiring you to be one step ahead of your opponent in order to succeed.

So pitting each game against each other is a bit pointless, because while they share the same basic concept, Quantum League and Lemnis Gate are both radically different. Quantum League scratches an arcade itch, being a fast-paced shooter with a style and feel suited for those who like titles such as Overwatch. Lemnis Gate, meanwhile, is an impressive hybrid of FPS and turn-based strategy that puts a unique spin on the genre and should please those who want something more cerebral. Regardless, both games are a welcome breath of fresh air, making the best out of a unique idea that we can’t wait to see more of. Lemnis Gate is due out later for PX, XB1 and PS4, and Quantum League is also due later for the PC, so best to put them on your radar now.