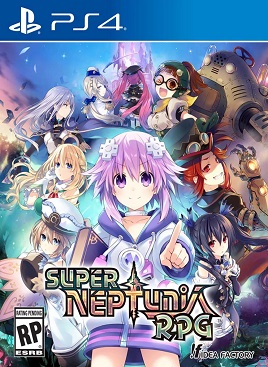 The Hyperdimension Neptunia series is one that fans of Japanese RPGs either love or loath. Centered around the living personification of the game industry, the dialogue is chock full of meta humor and a lackadaisical goofiness that demands a certain level of tolerance on the part of the player. Despite this, the series does well for publisher Idea Factory and developer Compile Heart, seeing as the franchise has ventured to the realm of RPGs, action games and even a J-pop idol simulator for some bizarre reason. With that in mind, the new Super Neptunia RPG just makes sense. A 2D sidescrolling RPG adventure developed with Artisan Studios, it’s a fresh take on the franchise. The final result is one that shoots for the stars, but trips on its own feet in embarrassing fashion.

Even before beginning the game, fans of the series can take a guess at the plot. Heroine Neptune wakes up with amnesia in a strange home with no clue as to what is going on. Seriously, though they poke fun of the reuse of this trope, Idea Factory should really consider renaming the entire series Superdementia Neptunia. Neptune is soon found by a member of the Bombyx Mori, the organization that rules over the 2D iteration of the land of Gamindustri with an iron fist, taxing its residents in the form of 2D games that are getting progressively worse and worse because they aren’t allowed to innovate. As Neptune travels the world, she’ll soon meet up with other series mainstays Vert, Blanc and Noire, as well as other heroes like Chrome, where they soon learn that there might be a mysterious third dimension hiding somewhere. It’s rather by-the-numbers and possibly a little flat. Still, the story has the charm that can raise a smile and the throwaway lines that don’t try as hard still tend to be the most likely to raise an unexpected chuckle.

That said, this game is heavily flawed. The most glaring of the issues is immediately obvious. This is patterned after a 2D exploration style game, with some light touches of the Metroidvania style mixed in. Developers need to know and understand that the cross pad is the input of choice for this style of game. Only allowing the analog stick to control direction in a 2D platformer is a cardinal sin. The jump button is also in an off place, utilizing the far right button on the controller of choice instead of the bottom one. Even after many hours of playing, it still feels weird, and it’s natural to default to the proper buttons only to be reminded that this game chose to ignore the industry standard inputs. An option to customize the controls would have gone a long way. 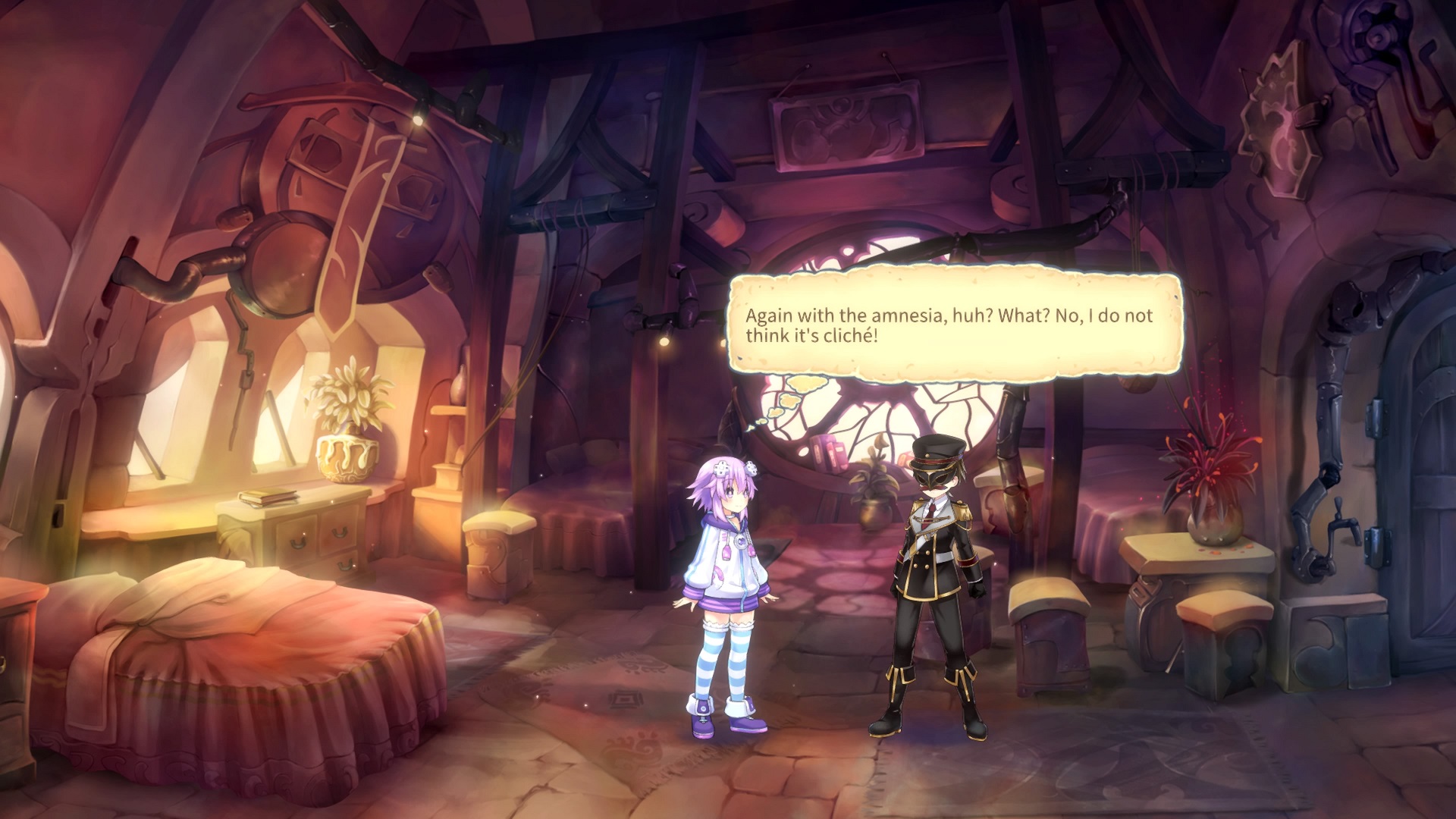 Not to say that this is the only issue. Those familiar with the series know that Neptune likes to narrate her jumps. In a normal series entry, it’s a cute touch, seeing as the need to leap is rare. Here, by the very nature of the style of game, it launches up the annoyance scale to Bubsy levels. “Bounce! Boing! Like a kanga-Like a kangaroo!” No, Nep-Nep. Not like a kangaroo. It is more akin to a swarm of microscopic spiders scaling along the nervous system, plucking at the nerve endings like an overly-excited Les Claypool testing out a new bass. Please, please just stop. It got to the point where my wife, one of the most patient people to walk the face of this planet by mere fact of being married to me, was starting to get a little batty from it.

The battle system does work on paper, but there is one thing that should have been explained to the player at the beginning. It’s basically a take on the Active Time Battle system where the entire team shares the meter. Tapping the left button changes the formation, which can change the skills available if configured as such by the player before hand. The problem here is that the meter fills at a laboriously s-l-o-w rate, adding to the irritation. It was much later, when an attention-seeking cat nuzzled my controller, did I learn that there was a way to fast forward the battle a bit, filling the meter and getting the enemy attacks out of the way. So, protip: the left trigger is your friend and will make this game so much more palatable. 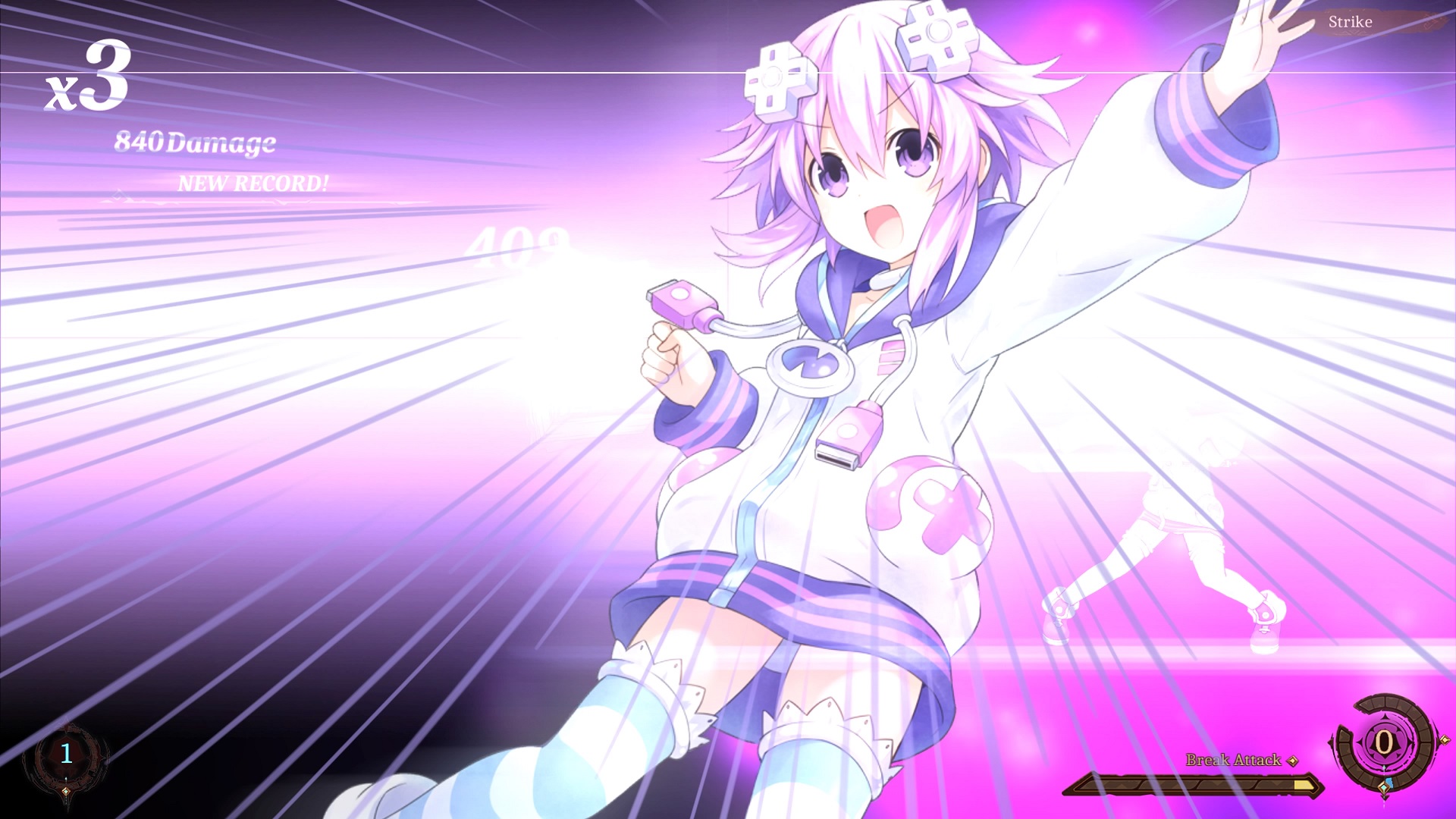 On the topic of time saving measures, this is a title that desperately needs a fast travel system. Sure, the world of Gamindustri isn’t huge, but there is a ton of back tracking to turn in side quests, not to mention the main stuff. Expect to explore the same territories multiple times for new truly rewarding reasons. To lighten the load, there are ancillary quests that folks in later areas will give just to give a feeling of accomplishing something while traipsing through an area again, but they tend to feel pointless. Why, in the name of the goddesses, are we being asked to wack some level two mobs when in order to reach the area of the quest giver we had to be well into the twenties? The answer is because the player needs to go through there anyways, but still.

Despite these myriad complaints, it is possible to find oneself having a great time. It helps that the art is gorgeous. One can only speculate as to the sacrifices made to the dark gods of the Unity engine that the developers made, but it is really humming along here. The cohesive, but varied art style pops off the screen with the lush forests of the land of Leanbox and the frozen white of Lowee. Getting to each “world” feels like a treat, an excitement to see how the familiar and well used lands of games past were interpreted in 2D form. The character art is striking, too. The hands spread run of Neptune and the spear jab of Vert pop off of the screen, and witnessing the animation never seems to get old. Playing the game to see the 2D versions of other classic returning characters, who shan’t be spoiled here, is excuse enough, and there are new enemies to see. 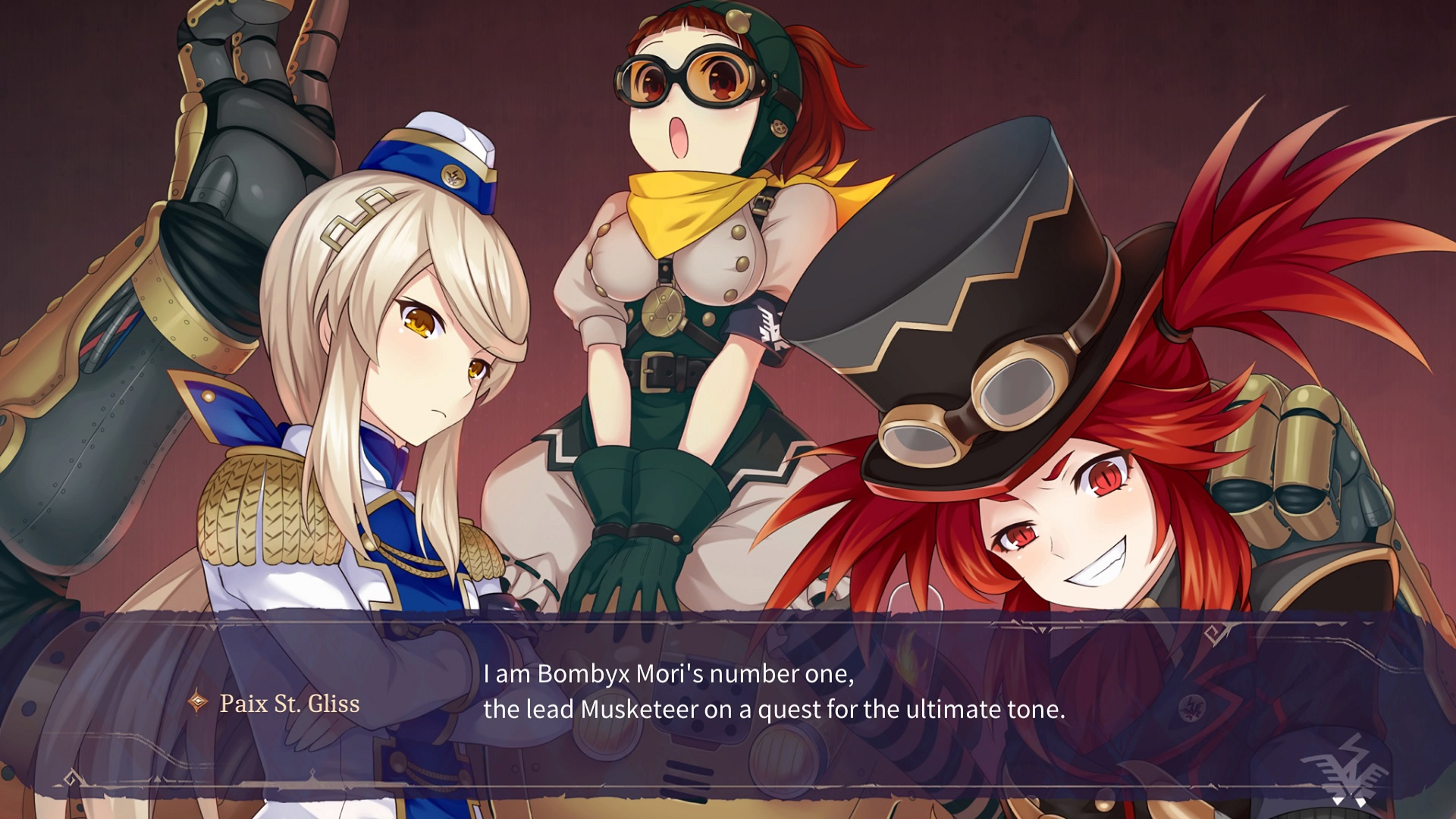 There’s a rather addictive loop of for gaining new skills, as well. Each piece of equipment has abilities and buffs that can be permanently unlocked after wearing it for long enough. While this system has been seen in other RPGs, it does allow for a high level of customization to create the perfect team of world destroying heroines to steam roll the Bombyx Mori. That, combined with the give and take nature of setting the skills for use in battle, coalesces into an addictive mix of JRPG goodness that leans closer to the relaxing end of the spectrum. This isn’t a particularly challenging game until reaching the later stages of the optional monster hunting quests, but it manages to stay engaging.

Plus, one can’t forget the story and the humor. Like its series’ brothers and sisters, Super Neptunia RPG plays to the balcony, with the collateral damage of the first few rows of the audience getting splattered with Gwar levels of mirth and whimsy to be expected. As noted before, the jokes that don’t try as hard tend to land better, but it’s hard not to smile at running into the youth trying to get revenge by raising feral “Bokemon” or the stupid-like-a-fox shop keeper asking for more and more money to get his business off the ground. It’s not like the player can refuse the quest, which means giving up valuable XP. Of course, mileage may vary based on tolerance levels. 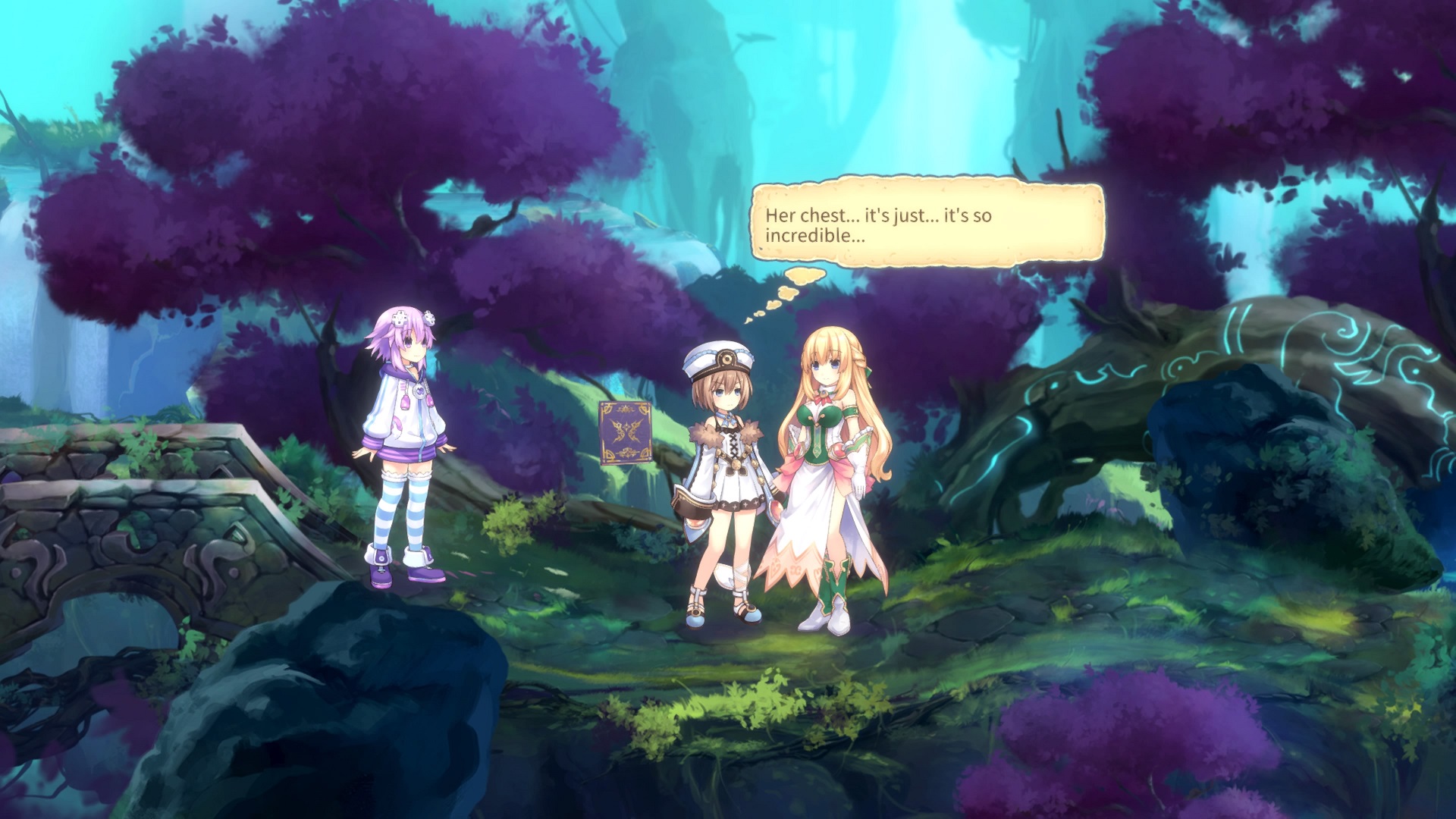 There’s a bit of a love/hate relationship in play when reviewing a game like Super Neptunia RPG. Maybe a case of Stockholm Syndrome has crept in, but the time in this 2D world feels mostly well spent. It makes numerous glaring mistakes throughout the game and yet it still manages to charm. The series is such that it seems likely another attempt at this flavor will be tried again and this would be highly welcomed. Seeing them get up from this faceplant, dust off and take another swing should result in a much better title. In the meantime, fans of Neptune and Friends will likely have a great time here. Those who already hate it should run away. For those who aren’t sure? Well, despite its warts, it’s a decent introduction to the series, and a great way to see which side of the line they will fall on.