The PS2 was a monster of a console for RPGs, and while Nippon Ichi Software didn’t get its start there, the system did host the developer’s breakout hit Disgaea.  The 2D Shining Force-style strategy/RPG did far better than anyone would have expected, selling out quickly and creating a franchise that’s still running today.  The combination of solid strategy, ridiculously high stats, endless dungeons and an honestly funny story of conquering the underworld by a cast of unforgettable characters made for a slow-burning hit that got more popular as word slowly spread.  Plus it introduced the world to prinnies, for better or for worse.  Nice as the old game was, Disgaea was created when most people still plugged their systems into boxy old tube TVs, so Disgaea 1 Complete remastered the entire game in full HD and included the bonus Etna chapter from the PSP version.  This more than warranted a deluxe version to house NISA’s flagship title and the Rosen Queen’s Finest Edition is a huge three pound box stuffed with Disgaea goodies.

The first item, an Etna “noppai” mousepad, doesn’t even fit in the box. 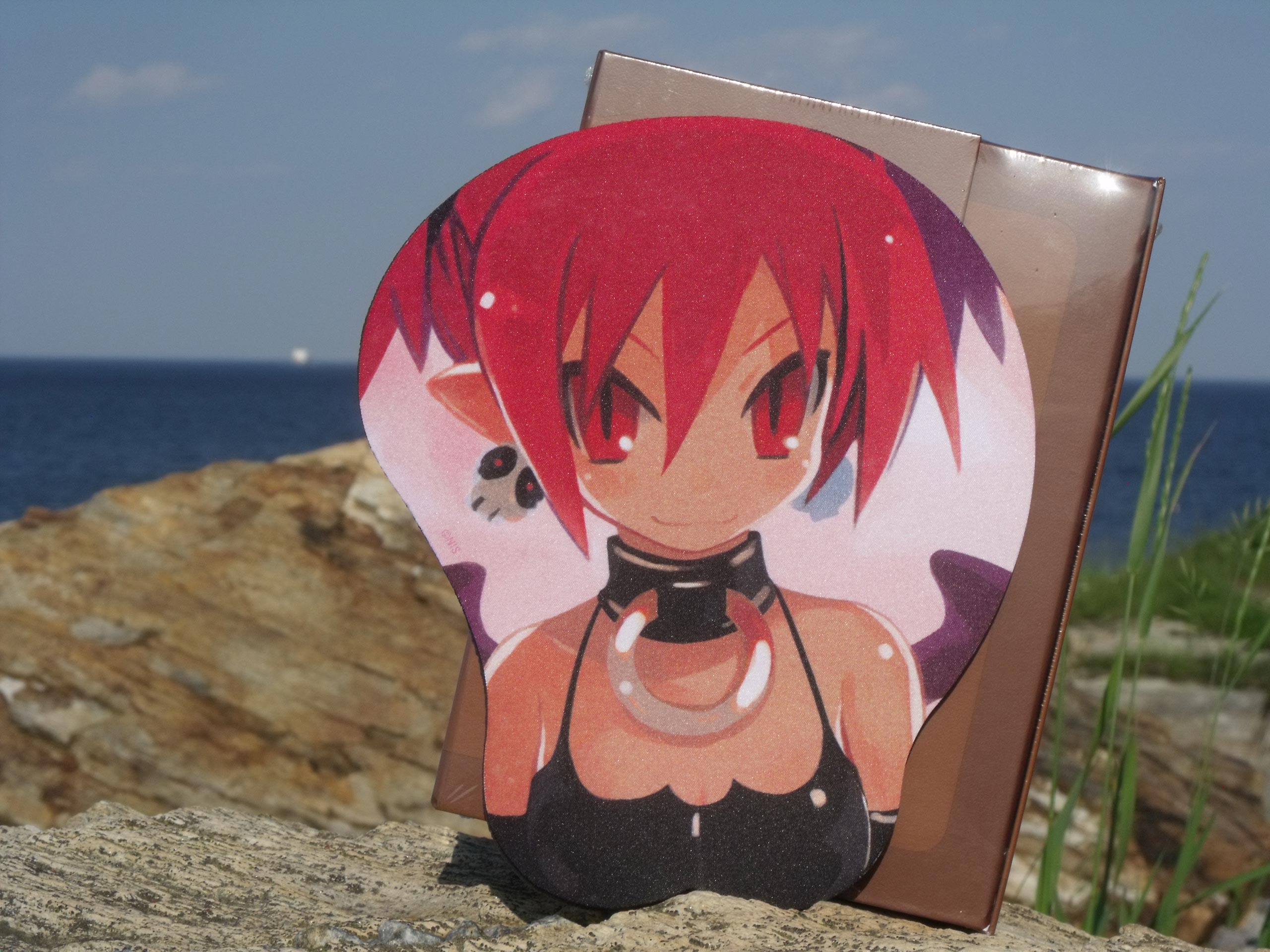 The box housing the rest of the goodies is a nicely designed mini-crate, 9 1/2″ x 7″ x 5 3/4″, with twin magnets holding the front flap down.  Popping the top reveals the all the swag packed inside, nicely organized to make full use of all that space.  It’s hard to know where to start looking, so I pulled out the soundtrack first just to get started. 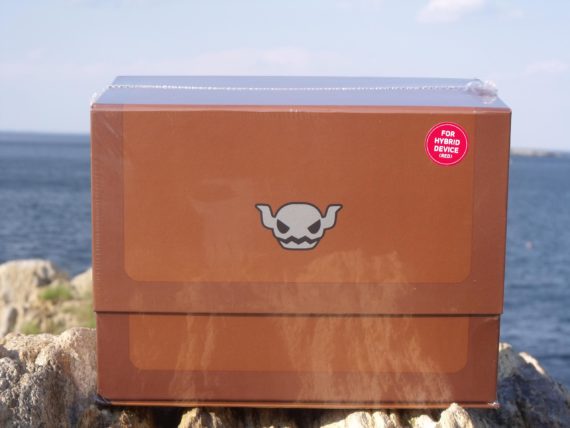 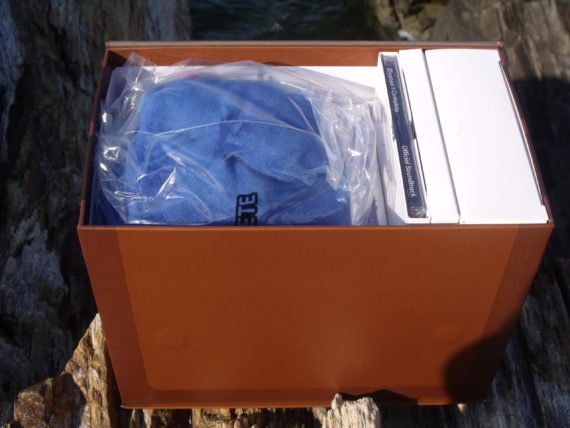 The soundtrack is held in place by a cardboard sleeve so it doesn’t sink to the bottom of the box and popping it open shows the entire thing decorated with art inside and out.  The actual disc contains twelve songs, so while it’s not as complete as the nearly two-hour double-disc edition, it’s a nice selection of music. 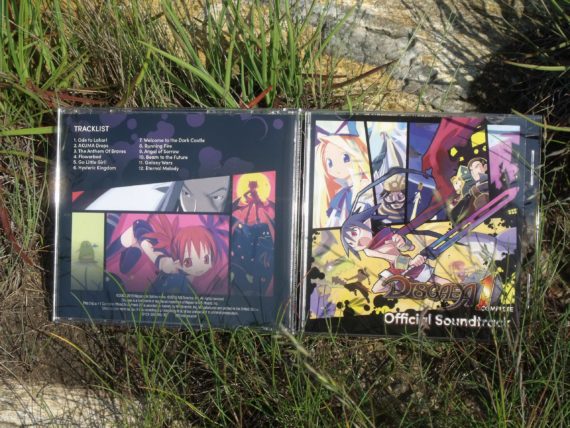 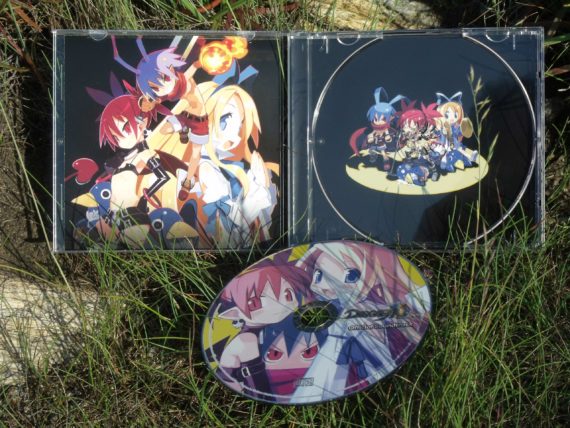 Beside the soundtrack on the right is the Orthodox Prinny Set, which is three coasters in a prinny-decorated box.  The coasters are solid and rubbery, perfect to hold drinks but much better to place on a shelf to have a colorful round prinny face staring out into the room.  They’ve even got wings printed on the reverse side. 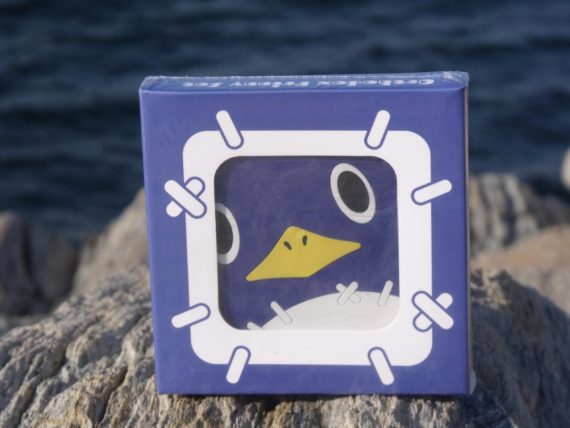 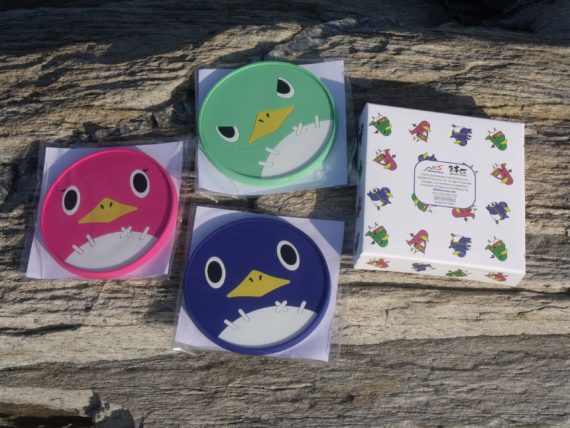 On the left side of the soundtrack is the actual game, housed in another white cardboard box so it doesn’t rattle about.  The case houses a reversible cover plus the tiny little cartridge, and while it’s not the fanciest part of the package, there’s hundreds of hours of gaming waiting inside. 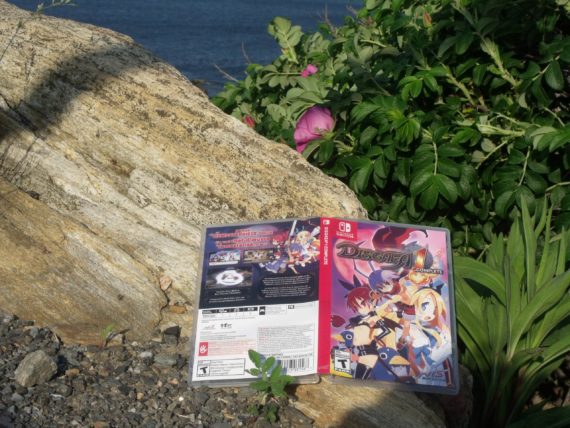 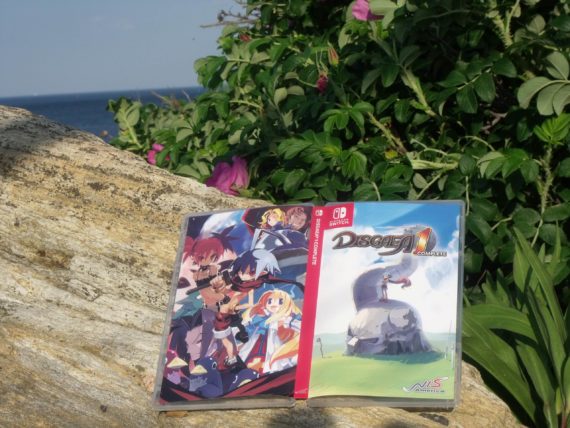 The next part of the package is the large-ish white box on the far right, which contains even more items inside.  The most impressive is the pin collection, which is five characters from the Netherworld and another four from Earth.  The pins are metal and enamel, classing up any backack or coat they may adorn. 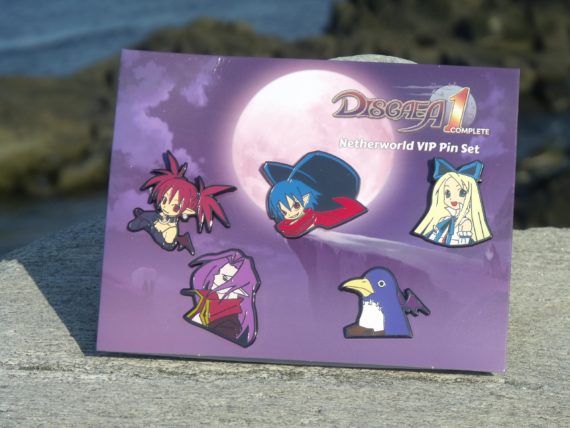 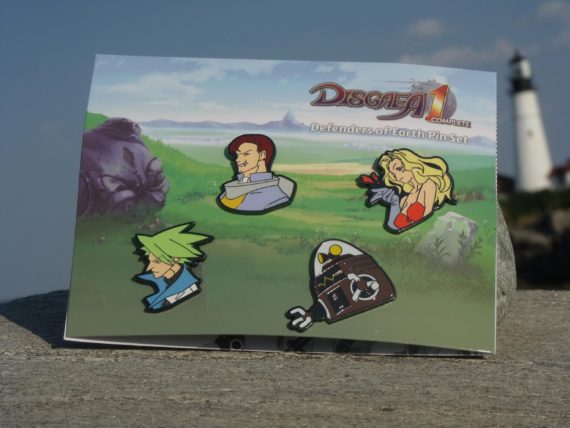 The art book is a nice hardcover affair, 44 full color pages and packed with official info plus commentary from Etna and Flonne.  It’s divided up into four chapters covering the main characters, generic characters, monsters, and illustrations.  There’s a surprising amount to pour over and the printing quality makes the details pop on the somewhat tiny art. 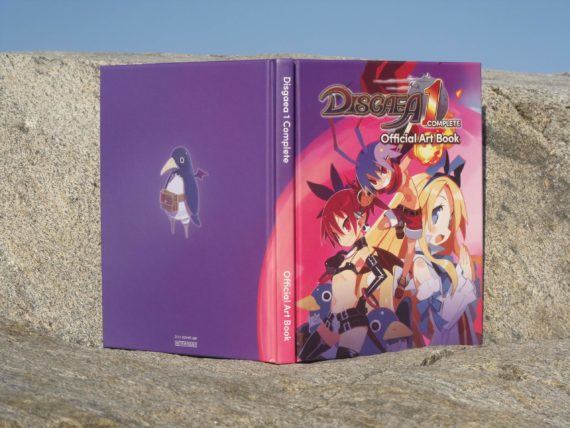 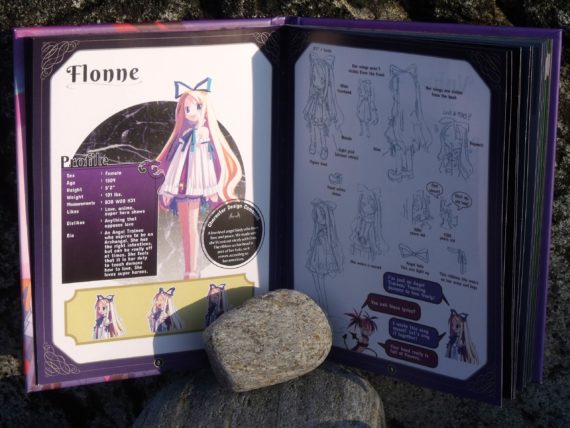 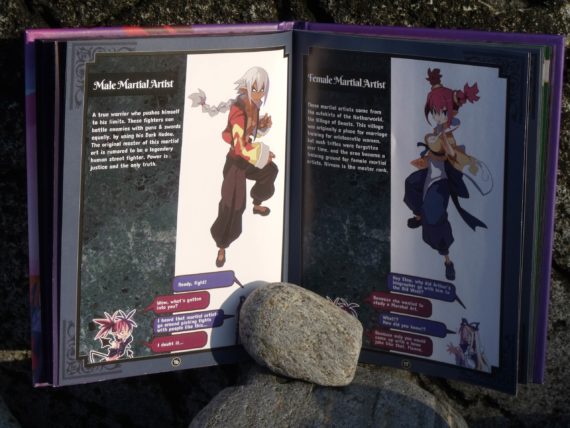 Next up comes the certificate of authenticity, in case you were worried someone might have faked a giant box of Disgaea swag, plus a pair of large posters.  The first poster is a group shot (18 1/2″ x 24 3/4″) while the second is the cover art from the original game (18 3/4″ 27″) and they’re both made of a decent paper NISA describes as “tear resistant.” They didn’t tear while being placed on rocks with a seaside breeze fluttering the corners, so it looks like they live up to their promise. 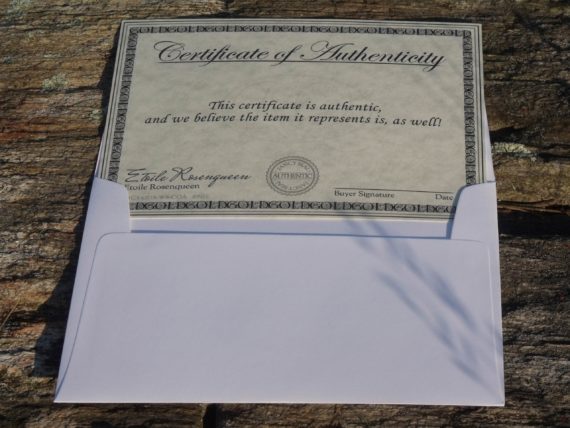 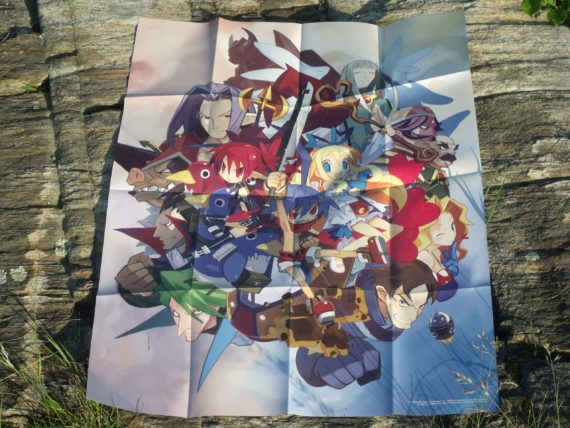 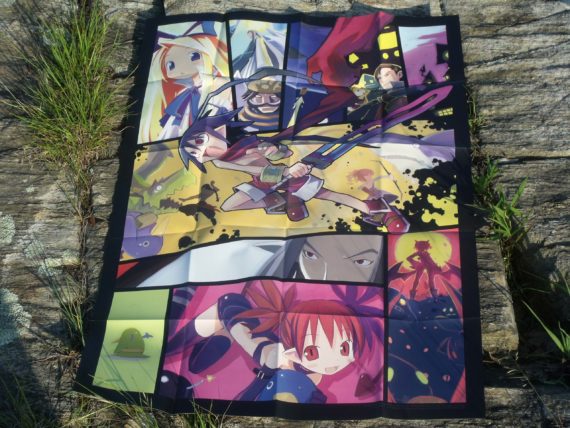 While technically the game should be the star of the show, it’s kind of hard to top a stuffed cubic prinny.  Their normal habitat is the shores of the netherworld, where they act as servants to the temperamental Etna, but this one seemed to like hanging out on the rocks by the ocean instead.  He’s a soft little guy, perfect for hugging, and while his beak and eyes are flat, the wings on the back are modeled and stuffed just like its side flippers. 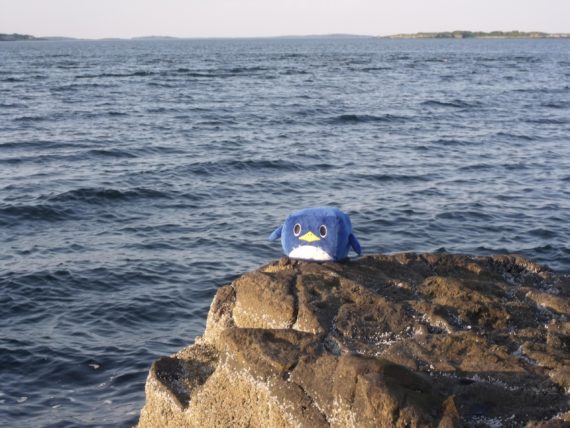 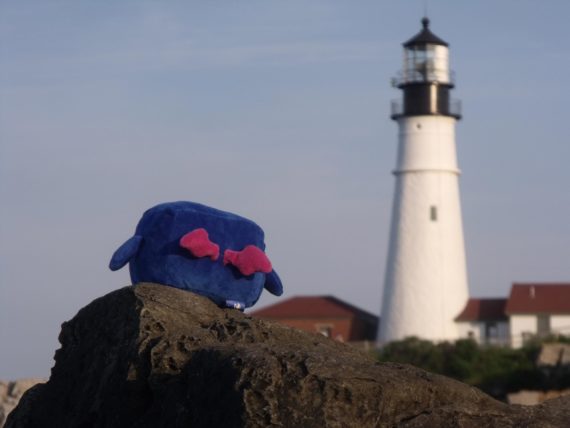 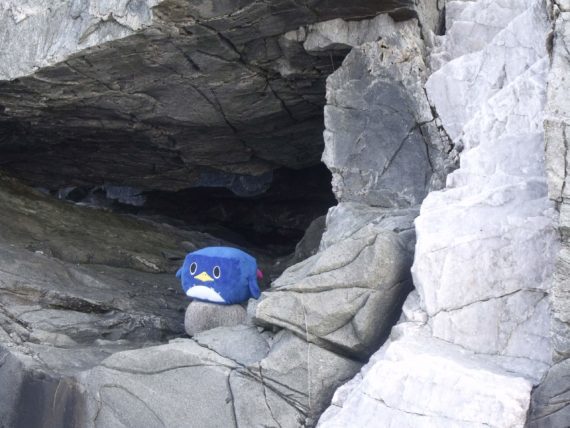 Disgaea 1 Complete: Rosen Queen’s Finest Edition does a great job of living up to its subtitle.  It’s a fully deluxe package containing a huge amount of toys and extras, housed in a handsome box that only hints at the weirdness of the game it contains.  Disgaea was a breath of fresh air when it originally came out and it’s aged well, spawning a series that still does well for itself with each new release.  The HD remake is the definitive edition of the game and the Rosen Queen’s Finest Edition is by far the nicest way to add it to your collection.