For some reason, I never quite got into Fallout 3 when I first tried it. I made it to Megaton, solved a couple of quests, wandered the wasteland…then just sort of got bored. Skip forward a few years, though, and just for the heck of it, I decide to pick up Fallout: New Vegas during a Steam sale. The next thing I knew, I had played it for a week straight and grabbed the DLC campaigns as well. I was hooked. Obsidian vastly improved upon its predecessor, injecting the world with more color, both figuratively and literally. They had somehow blended post-apocalyptic fiction, pulp sci-fi, Hollywood Westerns and classic Las Vegas all in one package, creating a strange and awesome world filled with many memorable characters, stories and moments.

So when I hear that their next game is going to be a successor to all of that, The Outer Worlds suddenly shooting to the top of my list of most anticipated games of this year was a given.

I mentioned New Vegas’ DLC and pulp sci-fi back there, though, and that brings Old World Blues to mind, easily the best of the DLC campaigns. It was basically a love letter to B-movies and mad science, and you could clearly tell that Obsidian was having a ton of fun with it. This time around, though, a lot of the aesthetics seem to lean towards even more earlier eras as well, or a mix of several of them. A large amount of businesses use old-timey logos and jingles more fitting a pre-1950s era (with massive, evil corporations trying to look as friendly as possible), almost like something out of a BioShock game, and loading screens even show parodies of World War I propaganda posters and the like. It’s a unique anachronistic direction for a planet-trotting outer space adventure and one that works incredibly well.

In the demo we were shown, we had to meet up with Catherine, a totally-one-hundred-percent-legitimate businesswoman running a small underground enterprise. It would appear that one the big corporation on this planet, Monarch, is making it difficult to compete with when it comes to the boarst market. What is boarst, you may ask? Why, it’s a genetically-grown alien pig that produces bacon-flavored tumors that can be lopped off of their bodies for dinner! Yummy! It is a nicely twisted, darkly humorous touch, though, and the writing here is as sharp as ever. Anyhow, Catherine basically laid out various ways to deal with the guy in charge of the nearby factory in order to help level the playing field: kill them, talk them into playing ball or sabotage their company. She mainly prefers the killing option, but it’s our call. 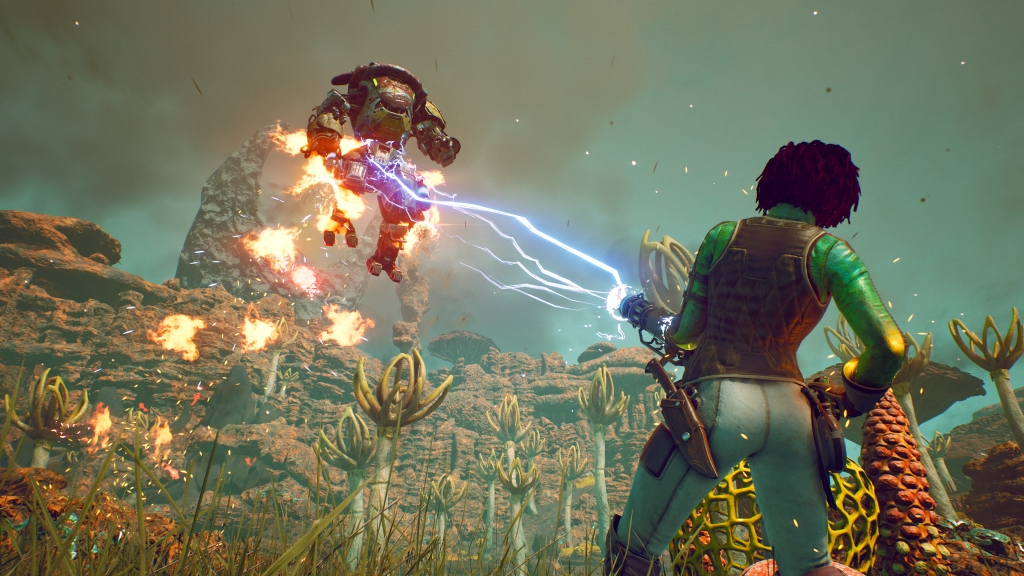 So heading out with our two partners, Ellie and Nyoko, we exit the cavernous town of Fallbrook and thus get to see all the flora and fauna of the planet we’re currently on in a wide, open area. It’s breathtaking, with everything being lush and vibrant. We also got a little bit of history concerning the colonization of the planet, as several corporations pitched in towards terraforming it into another version of Earth. Unfortunately, the local wildlife adapted to these changes, and began wrecking things up (we got to see some of the dinosaur-like creatures in their environment, but our host dare not disturb them yet). In the end, all but Monarch had fled, claiming the planet for themselves, and we were ready to mess them up a bit.

Well, ready after we made it past a few checkpoints with enemy guards, mind you. The first-person combat still has that New Vegas skill, complete with slow motion cutaway if your partner scores a critical kill. We also get a time displacement skill that allows players to slow things down for more accurate shots, with an emphasis on being able to target specific parts of an enemy’s body. And yes, this is where you may believe the similarities are getting too blatant, sounding a lot like VATS. But The Outer Worlds actually has a more varied system beyond extra damage. Instead, where you shoot an enemy hinders them with different ailments depending on the location. Shoot them in the leg, you impede them. Shoot them in the head, they’re blinded (if they survive). Shoot them in crotch, and they’re weakened…rather self-explanatory there. 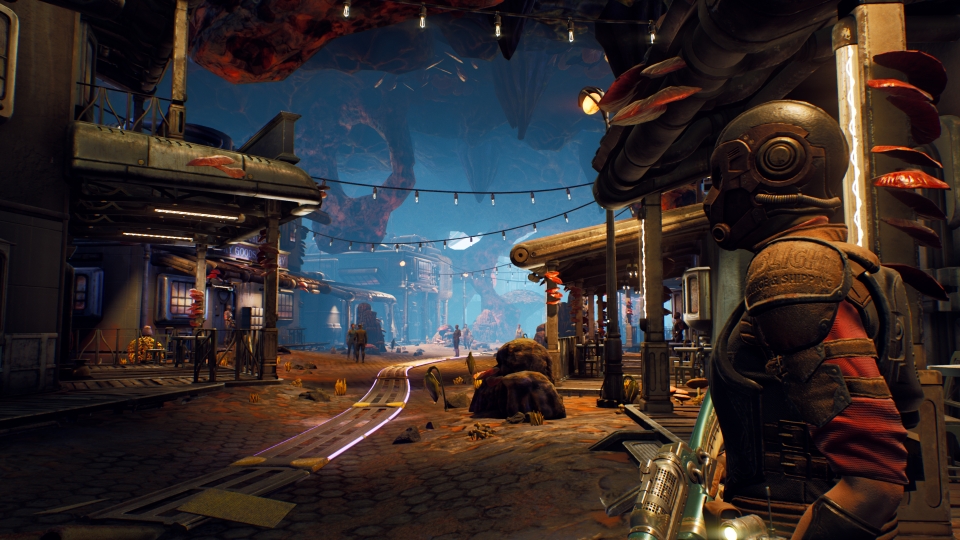 We didn’t spend too much time on this nifty mechanic, though, because we still had to break into Monarch’s factory. As expected, there were different ways to approach the situation. We could find a hidden entrance to a sewer connecting to the factory behind a waterfall, or trick our way past the guards at the gate, or just go in guns-a-blazing. As the character onscreen didn’t have a high enough lockpicking skill or a death wish, trickery it would be. This allowed us to deploy another unique addition in the form of holographic disguises. With the right disguise, you can flip a switch and automatically don an outfit needed to blend in with current company, but as it’s on a timer in each area, you have to use it wisely. And even then, the proper look only gets you so far. Sure, we could approach the gate without getting shot, but once inside, we still needed ID. Luckily, a high enough amount of charisma allowed for a dialogue option convincing the guard that it was our first day.

These scenarios pleased me to no end, because while New Vegas had solid combat, and The Outer Worlds looks to improve upon it, the biggest joy was in finding the various options that can get you through with wit and charisma. Nothing felt more satisfying that beating the final boss by basically delivering a PowerPoint presentation on how his plan is doomed to fail regardless and then seeing him slink away. So after successfully lying our way in, our heroes tried to discreetly move about the factory, especially since the disguise wore off and needs to recharge between rooms. There was one slip-up that required a successful dialogue check, but things went fine. To create a distraction that would get us to our target, we activated the “pink slip” protocol for all of the security androids, which naturally caused some mayhem as the droids were now in the process of terminating employees, who were firing back. 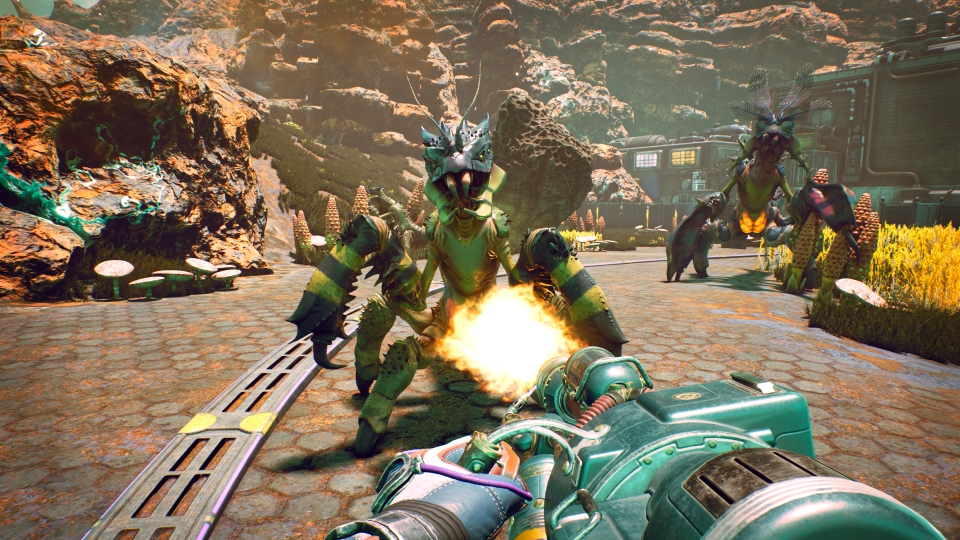 Of course, this now meant dealing with the robots as well, and that’s where we got into more traditional gunplay and combat again, which was another nice romp. At the end, however, another unique addition presented itself: flaws. After getting caught up in a mess of android gunfire, out protagonist came down with possible robophobia! So now we had to choose whether to accept this flaw or not. Doing so meant some of our perks would be increased, but we’d take more damage from robots. It’s a particularly welcome touch from both a gameplay and narrative perspective, having the player decide whether or not the positives outweigh the negatives while also seeing the character undergo little developments that could result from any encounter, not just quest-important stuff.

The demo ended with us facing the head of the factory, who made a counter-offer: kill Catherine instead and we get a lifetime supply of boarst, which would assist with the likes of HP. Or we could just kill him, or strike a deal and use our smooth talking to convince the two to team up. As expected, your choices will have notable consequences to you and everyone around you, and I can’t wait to see what they are. So far, The Outer Worlds seems like an absolute delight. It positions itself as a terrific Fallout: New Vegas successor, all while still having its own unique touches and flavor, alongside strong gameplay and an inviting universe to explore. The Outer Worlds become available to explore on October 25 for PC, XB1 and PS4, and we’ll be there to explore them on day one.