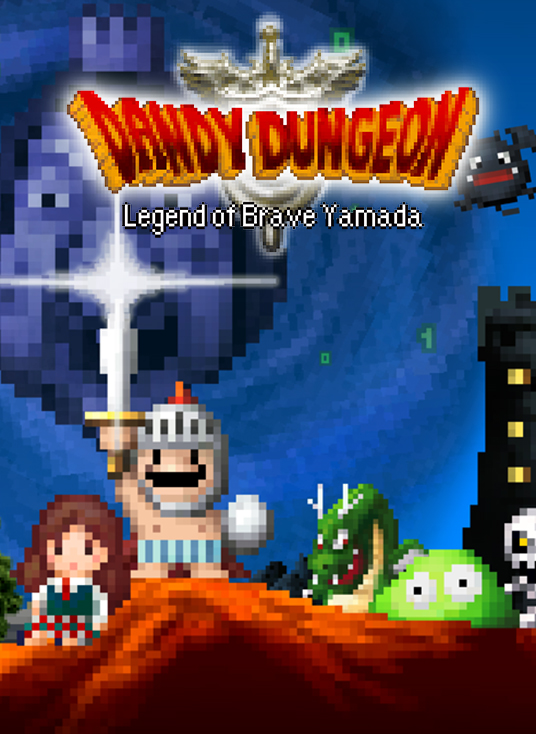 Yamada works in the trenches of the game industry, toiling away on other people’s creations. One day Yamada comes home, throws off his suit and decides to program a little game. Nothing major, just something to blow off steam and reignite his creativity, which as it turns out, is like trying to light a single drop of gasoline. One idea leads to another and his cute little dungeon-crawl turns into Feature Creep: The Game, but Yamamda is finally making something all his own and can’t stop now. His suit stays on the floor as he stops going to work and anyone wanting Yamada’s attention needs to drop by his small apartment. An assortment of friends, weirdos and other uniquely bizarre characters all show up to influence Yamada’s game in one way or another, making it bigger, richer and deeper in unexpected ways.

Dandy Dungeon: Legend of Brave Yamada is a fantastically strange little RPG featuring a hero questing through a series of 5×5 dungeons. Each floor is 25 tiles and the object is to clear the level by drawing a line from the entry square to the exit. On most levels this is a simple puzzle with multiple solutions, but later on you’ll need to take into account monster placement or other hazards. One you’ve drawn the line, Yamada travels along it automatically, fighting monsters and picking up treasure along the way. If you miss a tile it generates a fireball doing a single HP of damage once Yamada reaches the exit, stinging only a little compared to the shame of imperfect clearance. When you start a new floor you can stare at it as long as you’d like figuring out the best path, but once you start drawing it in (joystick or touch screen) the timer starts ticking down to zero. Take too long, and again, the fireballs show up to knock one HP per second off Yamada’s health.

Initially the dungeon crawl is a relatively passive experience, once you’ve drawn the line and set Yamada traveling, but it doesn’t take long for items to pop up. There’s a five-item inventory at the bottom of the screen where you can activate one at any time past its cool-down period, and the variety of effects are necessary not only for survival, but also clearing certain levels at 100%. Magic shields and barriers are nice, and health potions or scrolls are always helpful, but a summons of a peach-headed deity who unleashes a tsunami that both damages any monsters on the effected tiles and also clears off the impassable water can change a good run into a perfect one. The advantage of a perfect run is not only the satisfaction of a job well done but also a powerful item only rewarded after earning the dungeon’s gold cup. 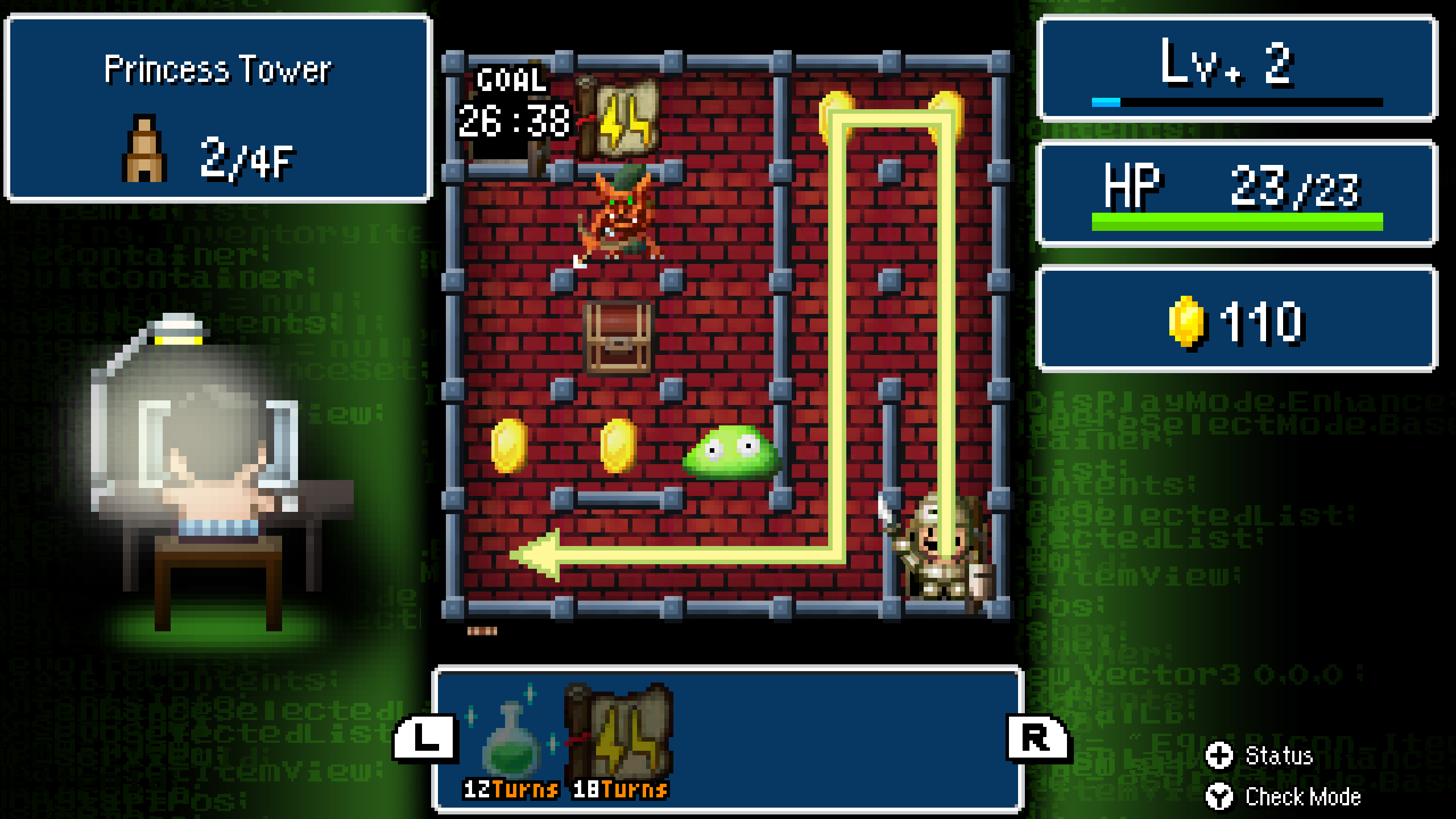 Each dungeon starts off with a list of findable items, and earning the gold cup requires not only collecting everything, thankfully over multiple runs, but also clearing all floors of the dungeon by walking on every accessible tile. Water tiles don’t count, but if there’s an island in the middle of water or a series of tiles blocked off by walls, then you’ll need to figure out how to access them. Once the path is set it can’t be changed, requiring you to live with any mistakes, but even an eight floor dungeon can be cleared in a little over four minutes. Once you’ve beaten all monsters and maybe a boss encounter it’s back to Yamada’s small room where the other half of Dandy Dungeon takes place.

For someone hanging around in his boxers and never leaving his apartment, Yamada gets a lot of visitors. A friendly co-worker comes by and fills him in on events in the outside world, less friendly ones visit to fire him in person, a mob-manager lets him know when dungeon bosses have respawned and of course the woman he’s fallen in love with sometimes shows up with a pile of baked sweet potatoes or an encouraging word. There’s a world filled with strange characters outside Yamada’s apartment and most of them are determined to add their influence to the game. 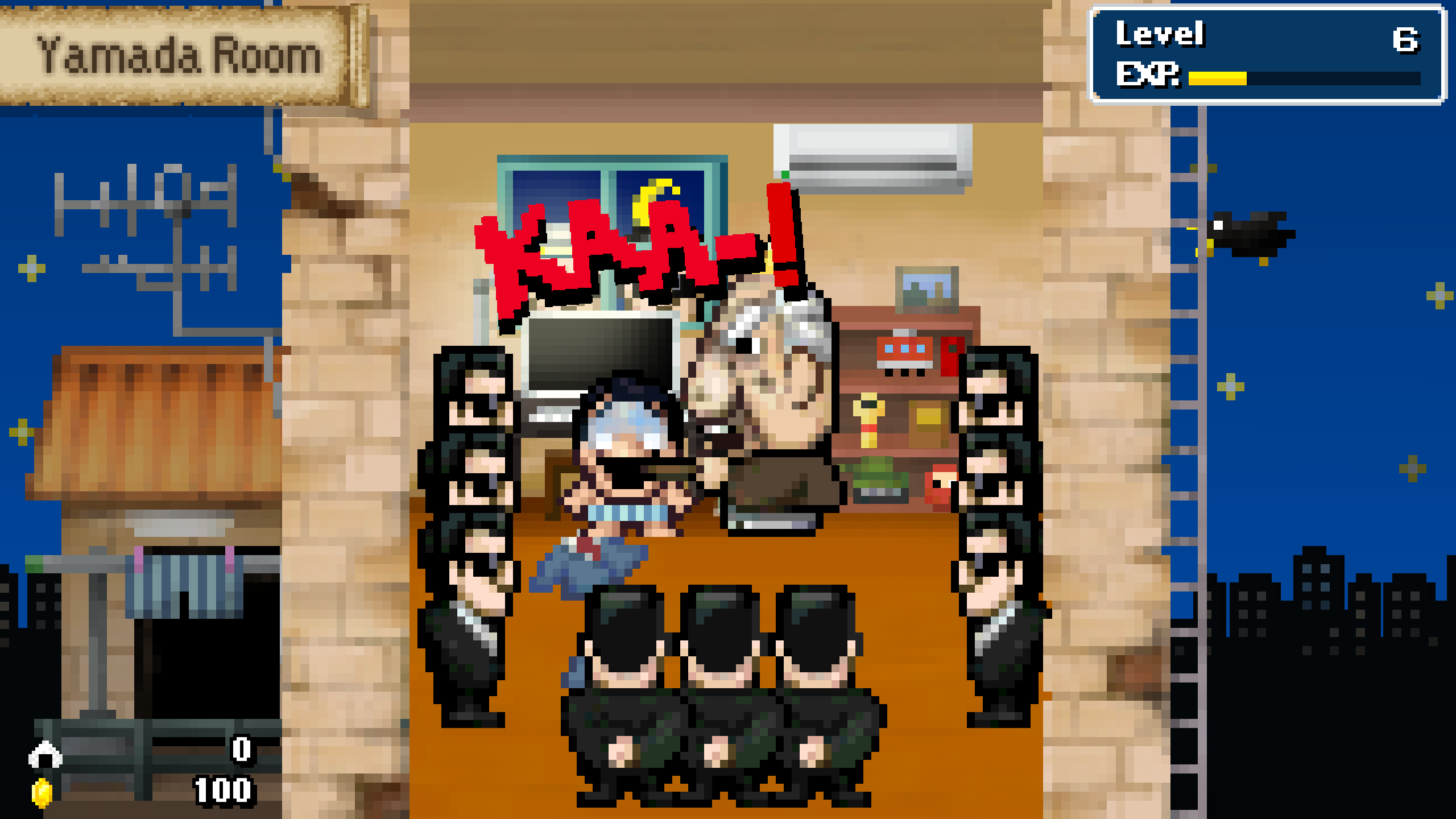 There are also a pair of menus accessible outside the dungeons. The smaller one keeps track of progress, including of how many dungeons are left on the way to the story’s completion, outfits found, etc. The other, bigger menu lets you manage inventory and crafting, which is where you’ll spend the bulk of the time outside of dungeons.

Each dungeon has a number of predetermined treasures kicking around in it somewhere, distributed randomly and not all available in a single run. There are a huge number of weapons, armor, shields and headgear to find, most of which can be combined into outfits that provide a new skill or stat bonus. The Wind outfit, for example, gives a nice speed bonus and frequently activates a whirlwind attack skill. The poop outfit, on the other hand, features a high-accuracy poop-on-a-stick weapon, which makes a certain kind of sense seeing as even a light graze by poop is going to be deeply unpleasant. Each piece of equipment can be upgraded multiple times, with the weaker ones going up to level five and the stronger ones all the way up to level twenty or higher.  Weapons and some armor pieces can then be further upgraded into new stronger gear, generally requiring a specific group of items of varying rarity.  The menu system is friendly enough to not only let you know what you need but also, when (touch-screen only) clicking on one of the requirements, telling you what set of dungeons you might find it in as a random drop. 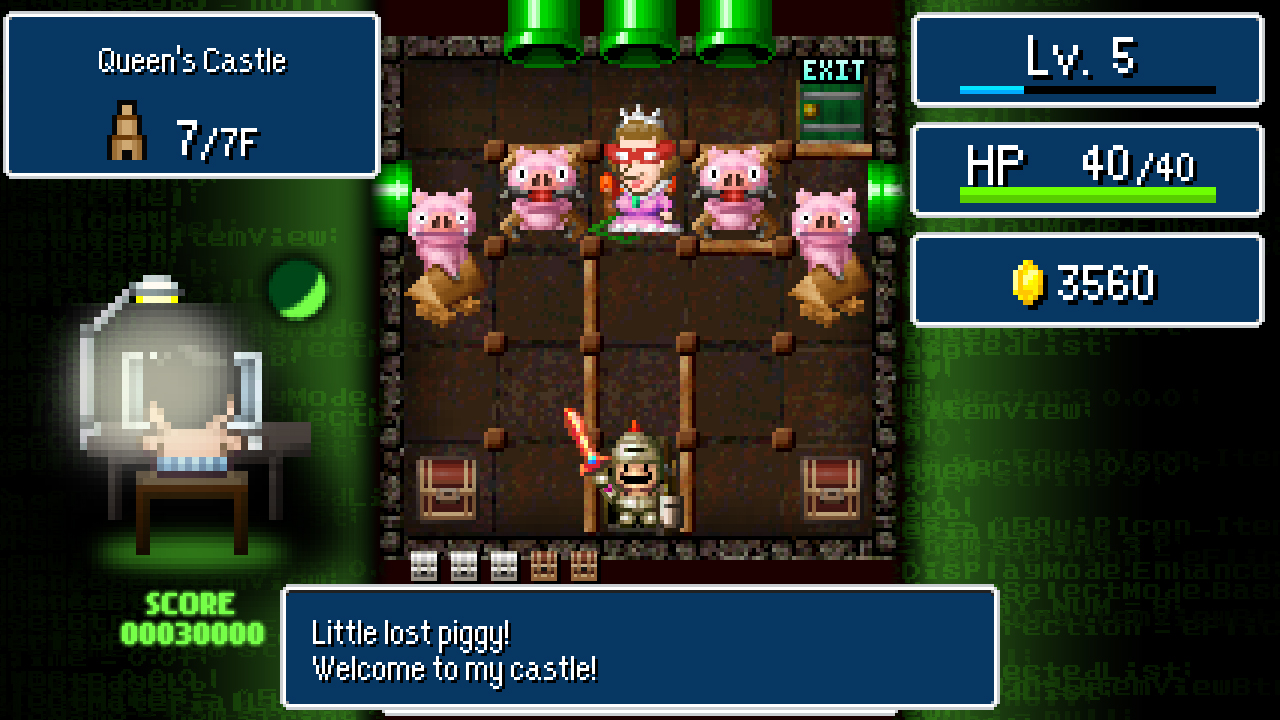 When story, mechanics and general weirdness and humor are taken all together it adds up to a wonderfully-unforgettable RPG about making an RPG.  The story feeds into the game and the game leeches into the story until the two are utterly inseparable, but even if they could be divided the dungeon crawling is incredibly playable.  While Yamada auto-fights all his battles there’s still more than enough left for the player to do in both plotting a path and working out a strategy for items.  Certain dungeons require specific spells to complete at 100% and the reward is usually a piece of loot worth chasing after.  It’s true that there’s more than a little grinding for items, but when the standard three-floor dungeon can be completed in ninety seconds or less, it feels like an approachable challenge instead of a chore, and the humor that saturates every aspect of the game from plot to monsters and the dozens of outfits Yamada can wear make the entire game lively from start to finish.  Dandy Dungeon: Legend of Brave Yamada is a treat of RPG weirdness and a fantastic way to let a surprisingly large number of hours gently drift away as one man’s epic quest to create gets completely out of hand.