For many, computer programming sounds like the absolute antithesis of fun. This mindset generally comes from the fact that, without any programming knowledge, it seems almost like witchcraft to the everyday person. Yet some of these same people may fall in love with logic puzzle video games, which obfuscates the more difficult aspects of programming. There’s also developers creating games that full on require you to write “real” code to proceed. Robo Instructus does not attempt to sugarcoat itself. You’ll be cobbling up lines of code to control a robot on its way through puzzles with minimal handholding.

There is no way to directly control your new robot pal to get it from point A to point B. All you can do is write and then submit programming scripts for it to execute. Robo Instructus starts out as simply as it can by pre-filling in some code and letting you watch it play out. The early levels come across as an extended tutorial, quickly explaining different programmatic concepts such as if-else statements and loops. Interestingly, the game only introduces the ability to go step by step through code after you have already been taught a variety of concepts. This means total newcomers might find themselves confused and stranded early on, when they really could have benefited from access to the step by step tool. 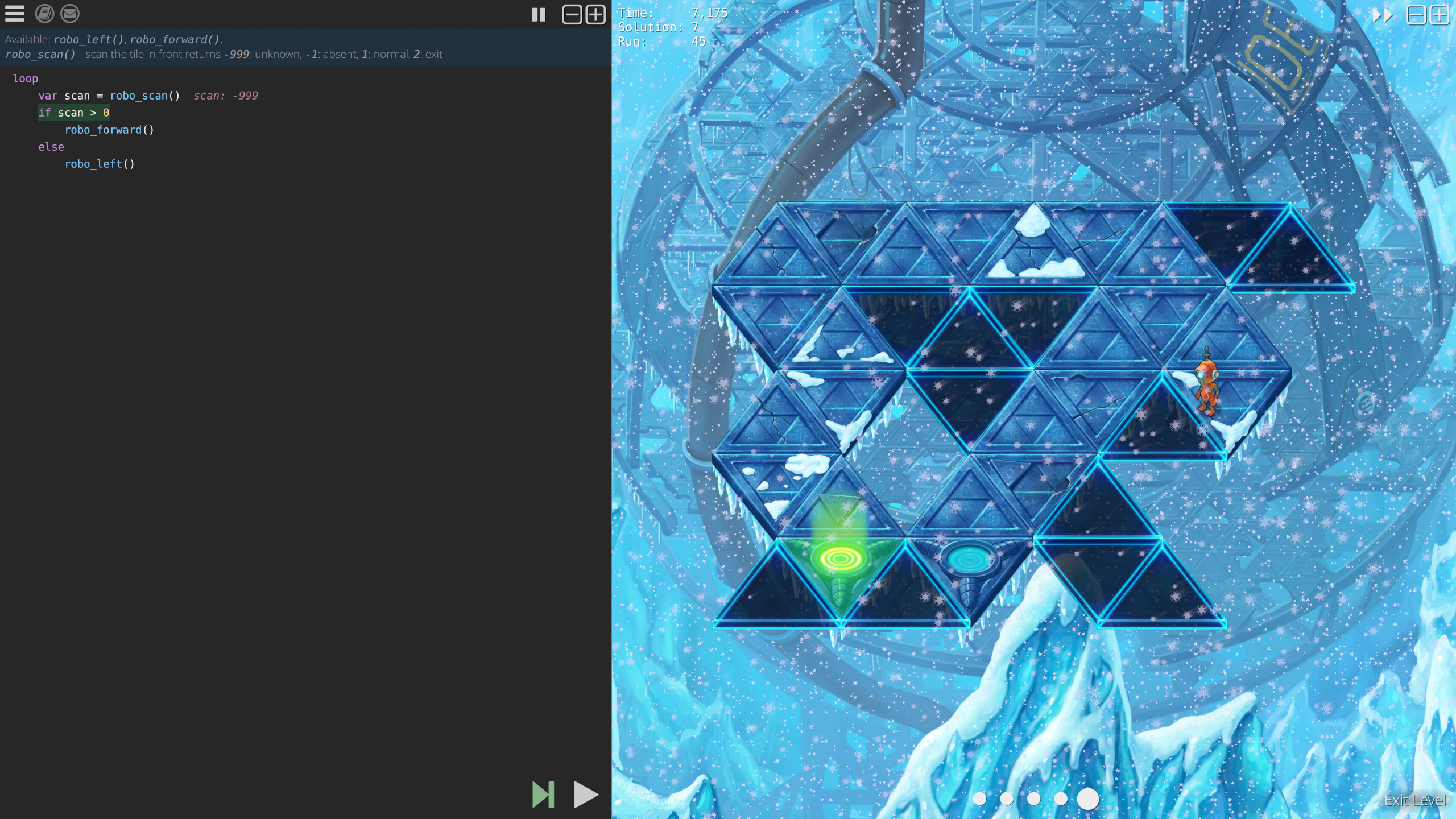 You’re technically not writing everything from scratch, though. Robo Instructus gives players a handful of freebie functions that are necessary for use with the puzzles. This includes things that tell the robot to move left or right, to scan the floor (for switches, or even gaps in the floor). At the very start of the game you’re free to write out every command that the robot will perform in one massive list of commands. After all, you can see the entire level from the get go — so why not write out every single step the robot must take to get to the end?

Well, that probably doesn’t sound too fun. That’s because the intent is for players to work smarter, not harder. Why write out thirty lines of code when you could instead write something much more succinct? That’s what things like loops are for. Basically, you can evaluate different circumstances intelligently rather than needing to write out an exact play by play. At the end of each level you’re given graphs that show how efficient your code was. This chart is an attempt to goad players into crafting better code. 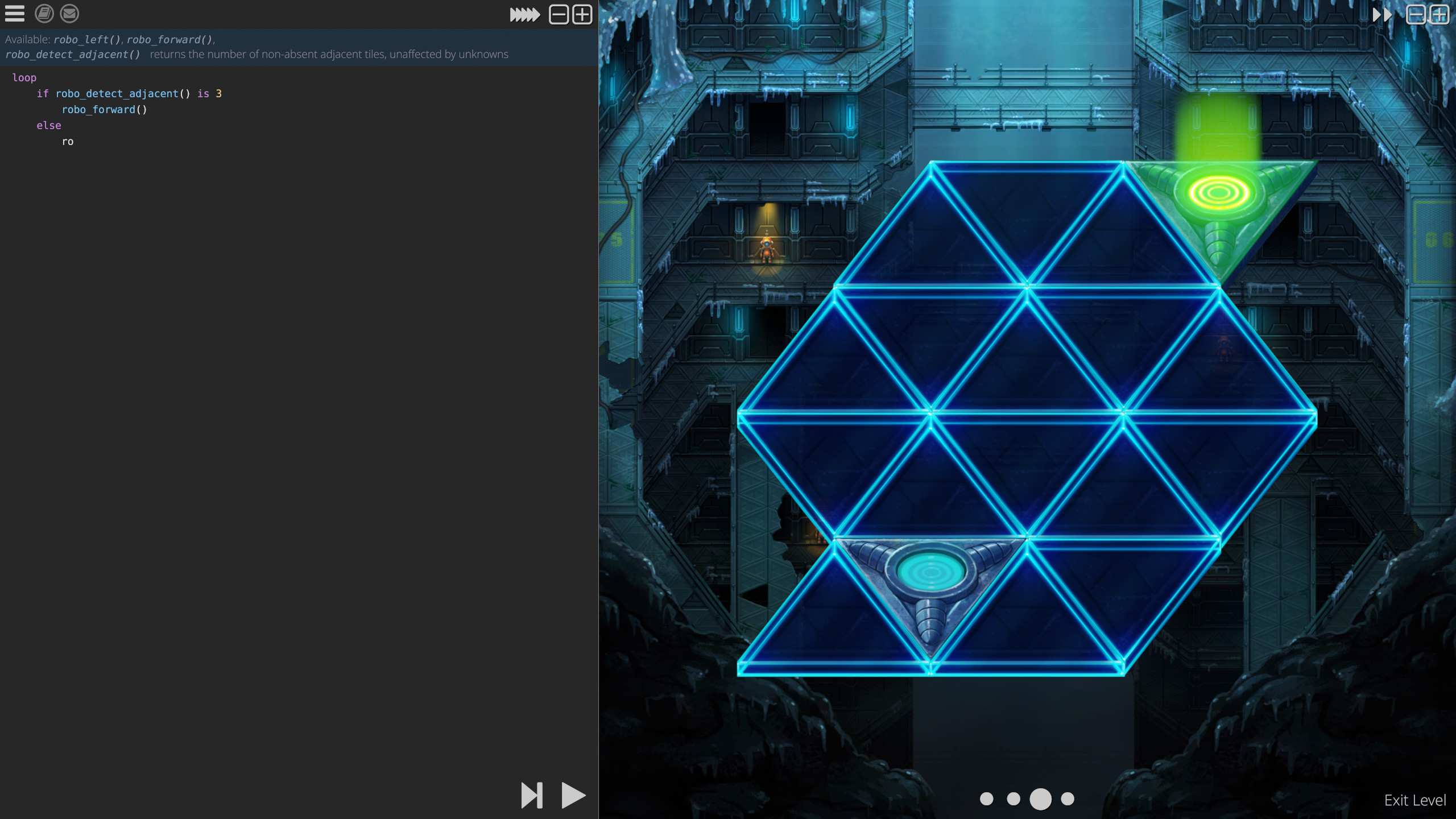 One concern with the current version of Robo Instructus is that it doesn’t cater well enough to total newbies to programming. The Python-styled syntax of the game is indeed easier to learn than some other languages out there. The game, however, fails to tutorialize the fact that indented lines of code must be done using either the tab or exactly four spacebar presses. Fortunately an error message does pop up if you use the wrong amount of spaces on a line. Very basic level concepts like this should be included in the tutorial from the get go. It’s mistakes such as these which can easily frustrate a newcomer into giving up before they’re really begun.

Those who have never written a line of code before could still get into the groove with Robo Instructus; it just might take a bit more effort than expected. The best thing about games like this is they provide a bit of actual “practice” with both thinking logically and writing. Since the code editor is based off Python, you’ll be able to then easily jump into writing in that extremely popular programming language. For existing programmers, it’s a fun diversion to command your robot buddy through a puzzling environment.