Back in the 16-bit days when CD storage was new, one of the major issues of the time was how to fill up all that space.  Four megabits or so was standard, and all of a sudden here’s a CD with 640 MB storage.  How on Earth do you justify the new tech when even fancy versions of the old games would rattle around like a stone in an oil drum?  One of the ways was with FMV, which brought its own set of design challenges with it.  When even professionally produced tv shows can’t escape the cheese factor, a low-budget gaming production doesn’t stand a chance.  As it turns out it didn’t need to, and while many of the titles made during that period were ragged on incessantly at the time, decades later it’s hard not to love them for what they were trying to do.

Limited Run Games has been working with Screaming Villains to bring the 1990s Digital Pictures releases to physical media, and after a successful release of Night Trap and Double Switch, this week’s remaster is Corpse Killer.  Sure, it’s basically Operation Wolf with tropical zombies, but the over-the-top ridiculousness that permeates every frame makes it far more entertaining than it has any right to be.  Corpse Killer is being released on PS4 in both a standard edition ($24.99, unlimited pre-order) and Classic Edition ($59.99, 1500 copies).  That latter release deserves a little attention because, in addition to coming in a box proportioned roughly the same as a 3DO title, plus goodies like the production script and behind-the-scenes picture booklet, it also comes with a random piece of memorabilia.  Production slides, VHS tape, or, if you’re exceptionally lucky, a sealed 3DO original version of the game. 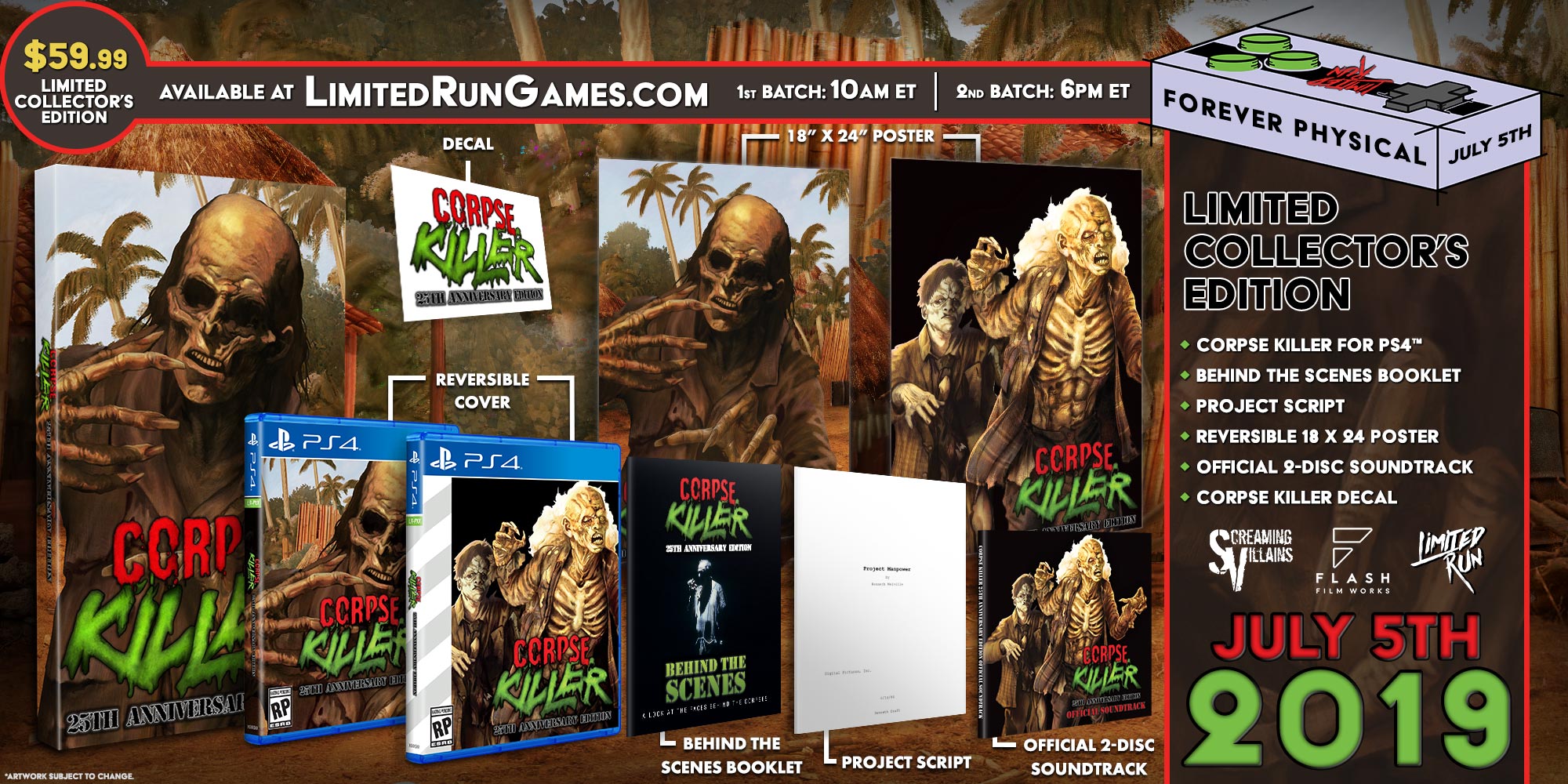 The other release this week is the excellent Transistor, the sci-fi action RPG from Supergiant Games.  This stylish adventure was Supergiant’s follow-up to Bastion, and cemented the company as one to follow for smart, unique RPGs.  Like Corpse Killer it’s going to be an open pre-order on both Switch and PS4 ($34.99 apiece), with a gorgeous limited Collector’s Edition.  While the Switch version has more copies available, 2,500 vs. the PS4’s 1,500, I’m going to have to give the nod of approval to the PS4 version, which doesn’t have any Nintendo-required trade dress on it to interfere with the fantastic box art.  The Collector’s Edition comes with a set of four coasters from Red’s favorite take-out restaurant, Junction Jan’s, a pair of pins with the logo of the city of Cloudbank and secretive group The Camerata, a double-sided poster, soundtrack CD, and a beautiful metal wearable replica of Red’s ring.

Also on sale right now is the PSVR-exclusive Accounting+, open until July 12,  while the PS4 and Switch versions of Power Rangers: Battle for the Grid (which include all DLC content) are open until July 8, and ending tomorrow night on July 7 are the PS4 and Switch editions of Freedom Planet.  Limited Run Games has been busy, and while I haven’t run the numbers yet they’ve got to be earning the reward for Most Prolific Publisher fairly soon if it hasn’t been acquired already.  Whether that’s a good thing or not depends on one’s personal collector mentality, but with so many incredible games available from such a huge variety of talented people there’s no way to slow down now. 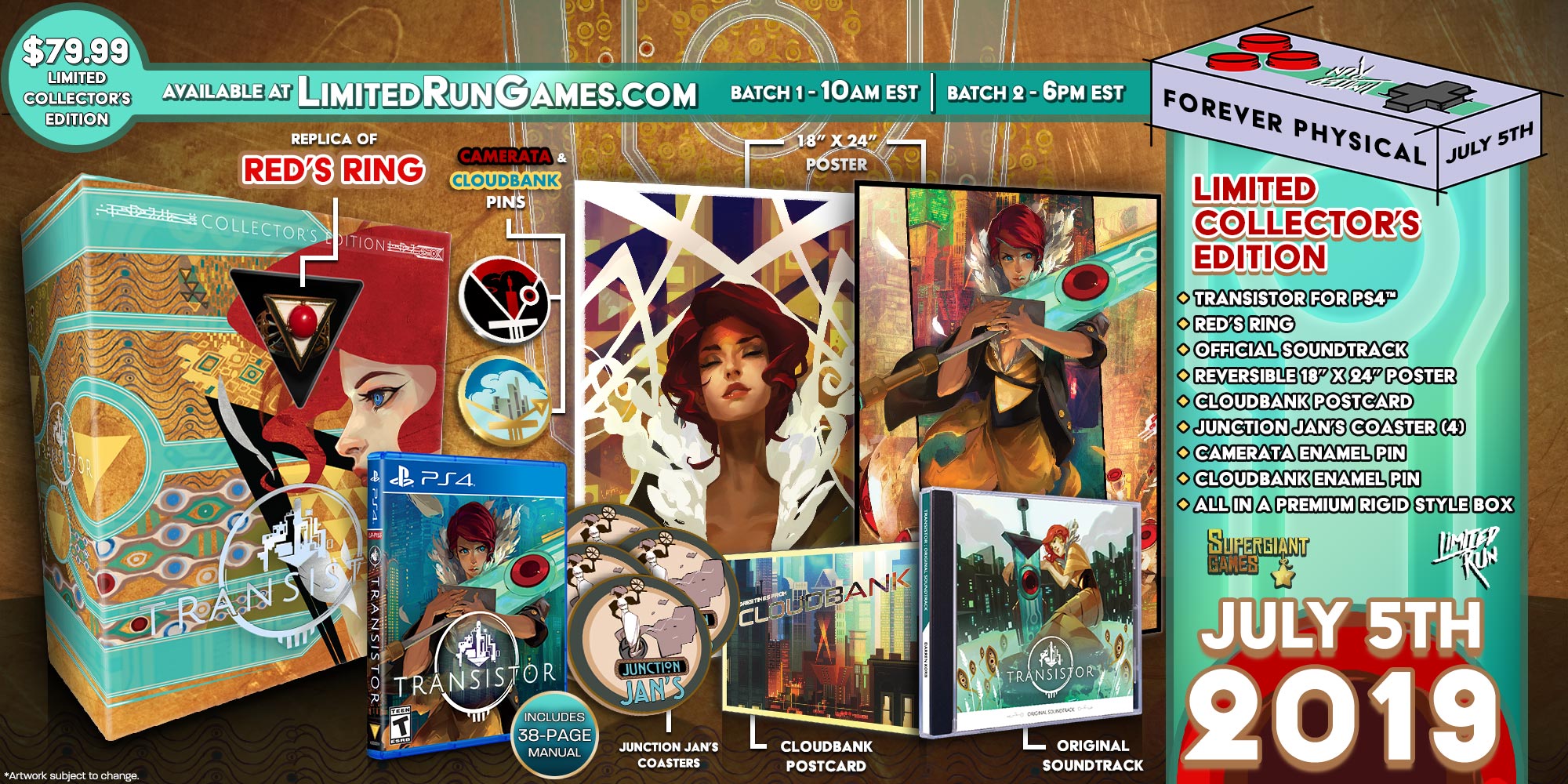