The beat ’em up genre has seen its fair share of ups and downs over the past thirty years. From its inception with games like Renegade to its booming popularity thanks to Double Dragon, the belt-scrolling brawler has been to the top of the mountain and as low as it can be. A run in the early ’90s saw some of the genre’s greatest games come out, but also saw every developer under the sun release something in it. Arcades were a sea of brawlers and fighting games in the early ’90s, but no genre felt quite as predatory as the beat-em-up in arcades. Generally, you got two lives for a quarter and you could count on most entries to be filled in instant death traps and swarms of cheap enemies. However, one game bucked that trend…for the most part — Final Fight.

What Renegade began and Double Dragon smoothed over, Final Fight finished. It felt like the culmination of everything the genre was capable of from not only a gameplay perspective, but for storytelling too. The basic plot of Metro City mayor ex-pro wrestler Mike Haggar’s daughter being kidnapped and him teaming up with either family friend Guy or her fiance Cody wasn’t much, but the story was told in highly-detailed cinematic scenes before the game — akin to Ninja Gaiden on consoles years before. The art style popped off the screen right away because it was so detailed — something you didn’t see a lot of at the time. 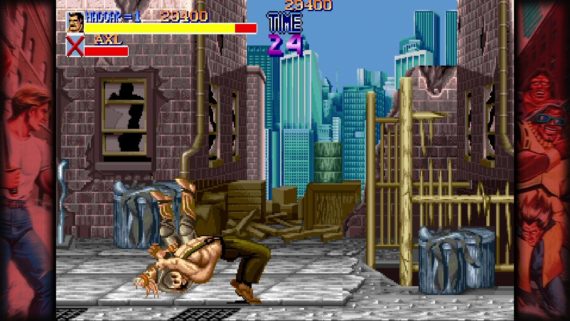 While Technosoft created the genre and popularized it, their games had a fairly low-tech look. Konami upped the ante a bit, but their stuff also fell victim to having a bit of a house style that led to smaller sprite sizes with a fair amount of detail. Capcom showed up to the party with gigantic character sprites that were impressive for their time and remain so nearly thirty years later. It’s amazing that a game could have its art age so well, but that’s the case with the first entry in the series — and isn’t true of many games of that era. More than just looking good, Final Fight is still a lot of fun to play, and part of that is due to the in-game world.

Metro City is sold to you as a cesspool and it starts off showing you that right away. Buildings are run-down and things like piles of tires are just left in the middle of the street. What’s worse is that these things contain knives, pipes, swords and sometimes even whole chickens! It’s complete insanity and a waste of a perfectly good chicken to just let it rot inside of a pile of tires or sometimes a phone booth. Sure, sometimes these things can be to your benefit as you can use the weapons to clonk and/or slice people up, but imagine trying to eat a whole chicken before taking a blow from an enemy? If it’s edible, you’re looking at at least feeling queasy from the sheer amount of food being consumed in such a short period of time. 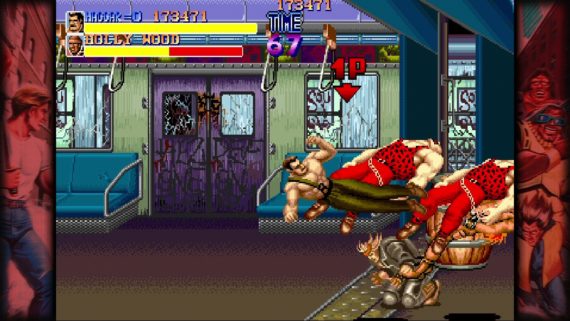 Fortunately, that short-term sacrifice is worth it to rid the streets of the Mad Gear gang. It’s a pretty diverse lot of people for a beat-em-up, and while the usual customary cloning machines have seemingly been used, the game does avoid being a sea of palette-swaps until at least the very end where you get your mad rush of just about every enemy type known to man. When it comes to the rogue’s gallery, Final Fight is probably best known for bringing Poison into the fray, while its legendary Andore family is a close second. They’re a group that is a black singlet and back brace away from being a ton of Andre the Giant clones, but Andre was an iconic figure to some degree in that era. While he was primarily a wrestling star, his role in the Princess Bride gave him an audience far beyond the ring and that’s something that has endured to this day with this like Obey Andre tags becoming something of a societal norm.

As a brawler, Final Fight’s pace is zippy overall. Stages are the usual screen-to-screen affairs, but locations are varied and that helps a lot. While the X-Men arcade game was a great game in a lot of ways, it was hurt by it being filled with areas that were awfully similar to the area you just came from. Final Fight has streets to fight on, subway terminals, the actual subway train, tracks, wrestling rings, caged wrestling rings, palacial buildings and a grimy red light district-esque area to do battle in. You’re never bored with areas to brawl in as a result and it makes playthroughs of the game feel more rewarding as a result since you can go through it every few years and find an area that you might have just forgotten about, but then be amazed at how detailed it is. For me, that was Edi E’s area, with its dark black backdrop set against purple-lit streets and overall look that’s unlike anything else of the time. 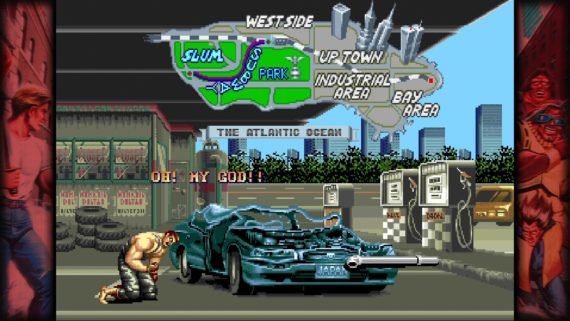 The animation strikes a perfect balance between being lush enough to look realistic, but not taking so much time that it slows down the pacing. The end result is a game that flows nicely no matter which character you play as. As a wresting fan, Haggar is my go-to, with Cody being a close second because he is so much faster and has a more diverse arsenal, and Guy being someone I choose just to mix it up. The poor dude’s name curses him as does his lack of any real personality in this game or really, any other. He’s a guy named Guy — he’s kinda doomed, although his orange gi makes me wonder if he received any training from a turtle hermit in an island near Metro City.

Even in 2019, Final Fight sounds great — with a soundtrack that has a soft rock feel that manages to fit the action. It’s not the greatest OST in brawler history, but for something without Yuzo Koshiro, it’s good stuff. The sound effects in FF are some of the best in the genre, with blows packing an aural punch whether you’re bare-fisted or just smashing folks upside the head with a pipe. Enemy attacks with things like brass knuckles really sound vile as a clank is heard that allows you to easily imagine the brain-rattling impact of such a blow. 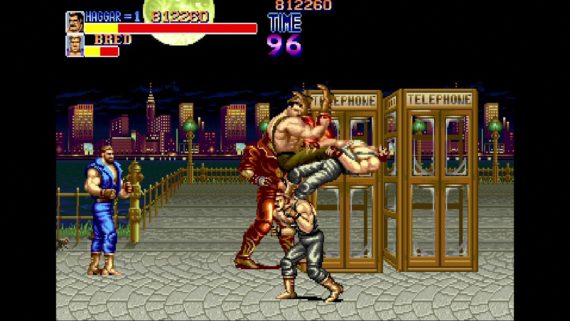 Overall, Final Fight remains a must-play entry in the genre. The game has been re-released a ton, with the SNES version being one you want to avoid and the GBA version called Final Fight One being a great way to enjoy it. Over the past decade, Final Fight Double Impact ensured that we received an arcade-perfect conversion for the first time ever. That version is playable on the Xbox One via 360 backwards compatibility, but the best way to play being the Capcom Beat-Em-Up Collection. That doesn’t have online DRM like Double Impact and is perfect on the Switch for on the go play.