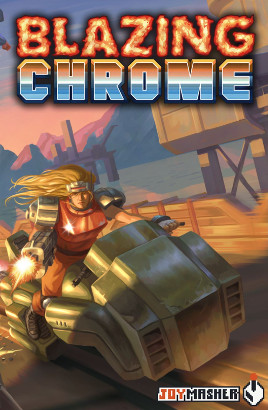 The world got a shock last month at E3 when Konami resurrected one of their classic franchises with Contra: Rogue Corps. This surprising reveal was met with mixed reactions. On one hand it seemed like it could be an enjoyable twinstick shooter; on the other it was nothing like the classic 2D run and gun Contra titles old school fans such as myself were hoping for. Apparently there are others out there with a yearning for the type of gameplay the likes of Contra and Metal Slug have provided, and thus we have the new IP Blazing Chrome. This is a game that proudly wears its flaming red C on its sleeve as it attempts to pay homage to the classic format.

The opening of Blazing Chrome plays out like a 16-bit tongue in cheek rendition of the bleak depiction of the future found in the Terminator films. Machines are the dominant force on Earth, ruled by militant AI computers. Any semblance of human civilization has been wiped out, overrun by the hostile toasters. Humankind is forced to exist within the ruins of their society under machine rule, until the inevitable happens and they decide to form a resistance to fight against their robotic oppressors. Initially there are two playable characters, Mavra, a human resistance solider who appears to have been inspired by Linda Hamilton circa 1991, and Doyle, a robot soldier who looks as though he wants to give the robot oppresses a legacy of brutality by putting a bullet in their skulls. The story is fairly generic, self conscious that it is treading on familiar ground as part of its homage, but in these type of games the story is more just to provide some context to the action and not as crucial as in an RPG. 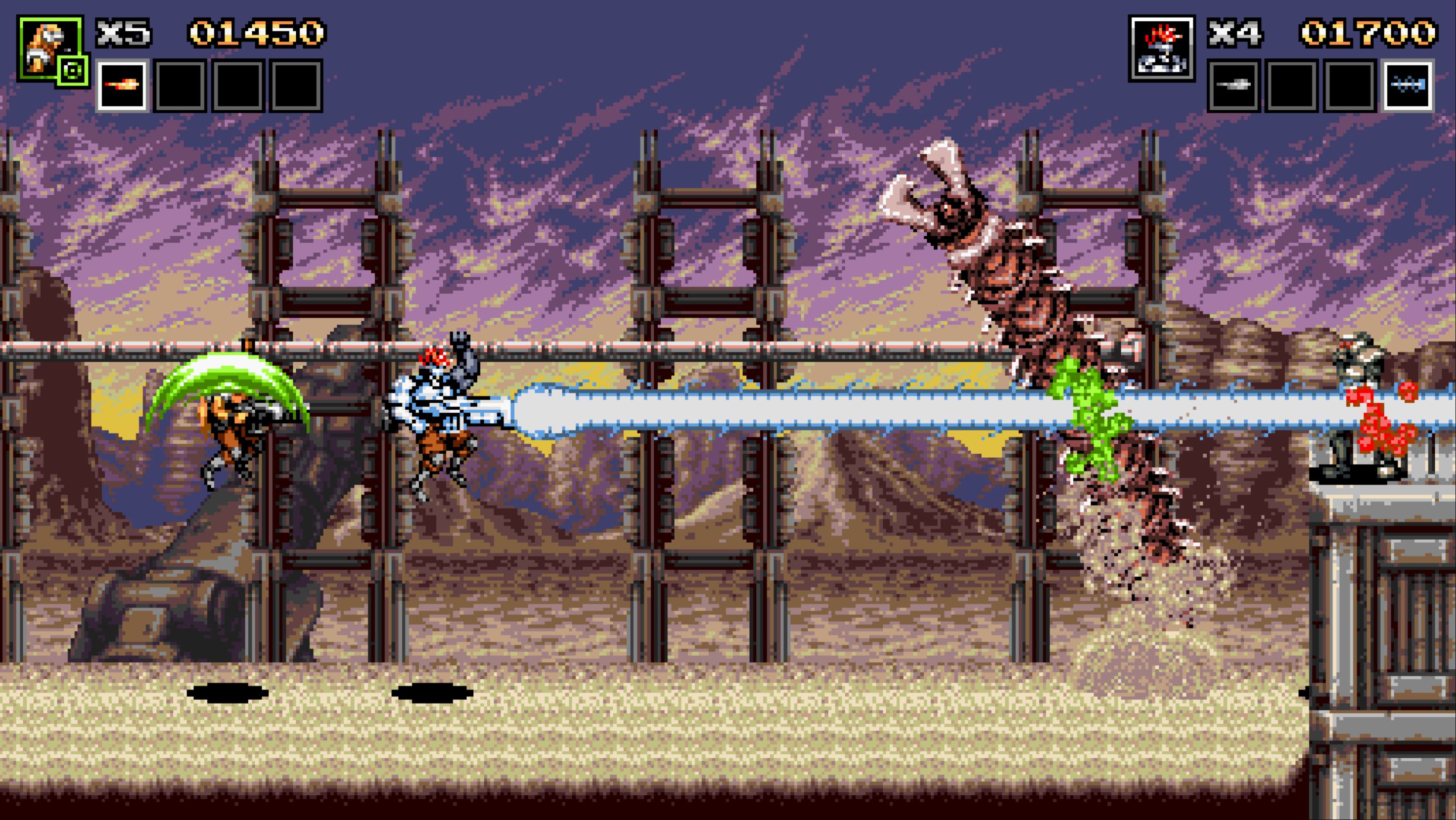 Blazing Chrome is an homage to the classic run and gun action of what was commonplace in the arcade a few decades ago during the 16-bit era. The levels are a bit longer and minibosses may make more frequent appearances than they did in the ’90s but basically it feels like a recently unearthed relic from that era. The gameplay is fast-paced action, filled with nearly constant shooting and platforming with the one mistake and you’re dead level of challenge that keeps a health bar from cluttering up the HUD. Memorization and reflexes are crucial to surviving in Blazing Chrome, but a proper old school run and gun wouldn’t feel right if it held your hand. In the spirit of the genre, local two player simultaneous co-op is supported for some old -ashioned couch camaraderie.

Four different stages are available initially for the player to select, with the suggested order implied by the different difficulty rating. Each level provides a variety of challenges as the players have to fight off hordes of enemy robots while jumping to avoid certain death and traversing the vertical passageways. Mavra and Doyle will sometimes need to rely on their upper body strength to pull themselves across hanging rails while fighting off pesky airborne enemies. The end level bosses are impressive mechanical monstrosities, but in addition to the environmental challenges, mid level bosses will make every effort to stop the player from ever reaching the end of the level, whether it be in the form of a mechanical super soldier of an advanced combat helicopter. Luckily in addition to the standard issued assault rifle there are other weapons to be collected and swapped on a whim, such as grenade launchers or a laser whip. 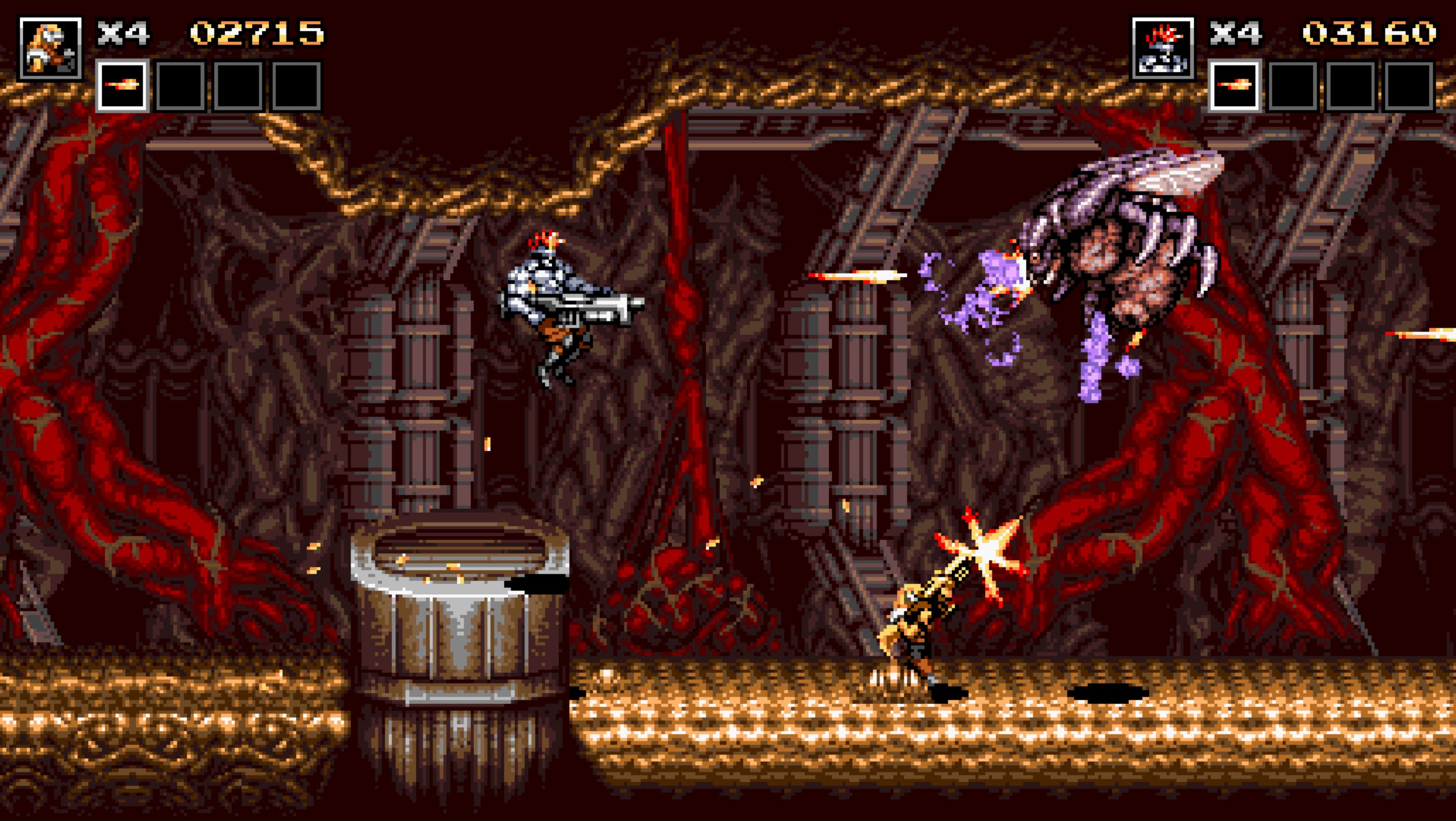 Blazing Chrome suffers from an identify problem and the term “problem” is being used loosely here. It’s obvious what the main influence is and given the quality of the source material this can result in a good game. Certain levels, such as the environments depicting urban ruins or a high speed hoverbike battle, pay homage a little too strong. There were a few moments in the game that seemed almost lifted from Contra III and made it feel like Blazing Chrome is treading the line between paying a tribute to run and gun shooters or being Great Value brand Contra. The blatant similarities don’t do anything to make this title any less fun and they’re clearly done as tribute but worth noting nonetheless.

The graphics do the influences justice, creating a bleak post-apocalyptic wasteland that looks like it crawled out of 1992 in terms of both artistic style and 16-bit pixels. There are a couple instances of deliberately garbled voices that sound like early attempts at bringing speech into video games. The controls feel like a contemporary take on the genre, a bit smoother and more responsive. Switching between the multiple weapons is a breeze and having the ability to hold a shoulder button to remain stationary while aiming the weapon like in Contra: Shattered Soldier aids a lot with boss battles. 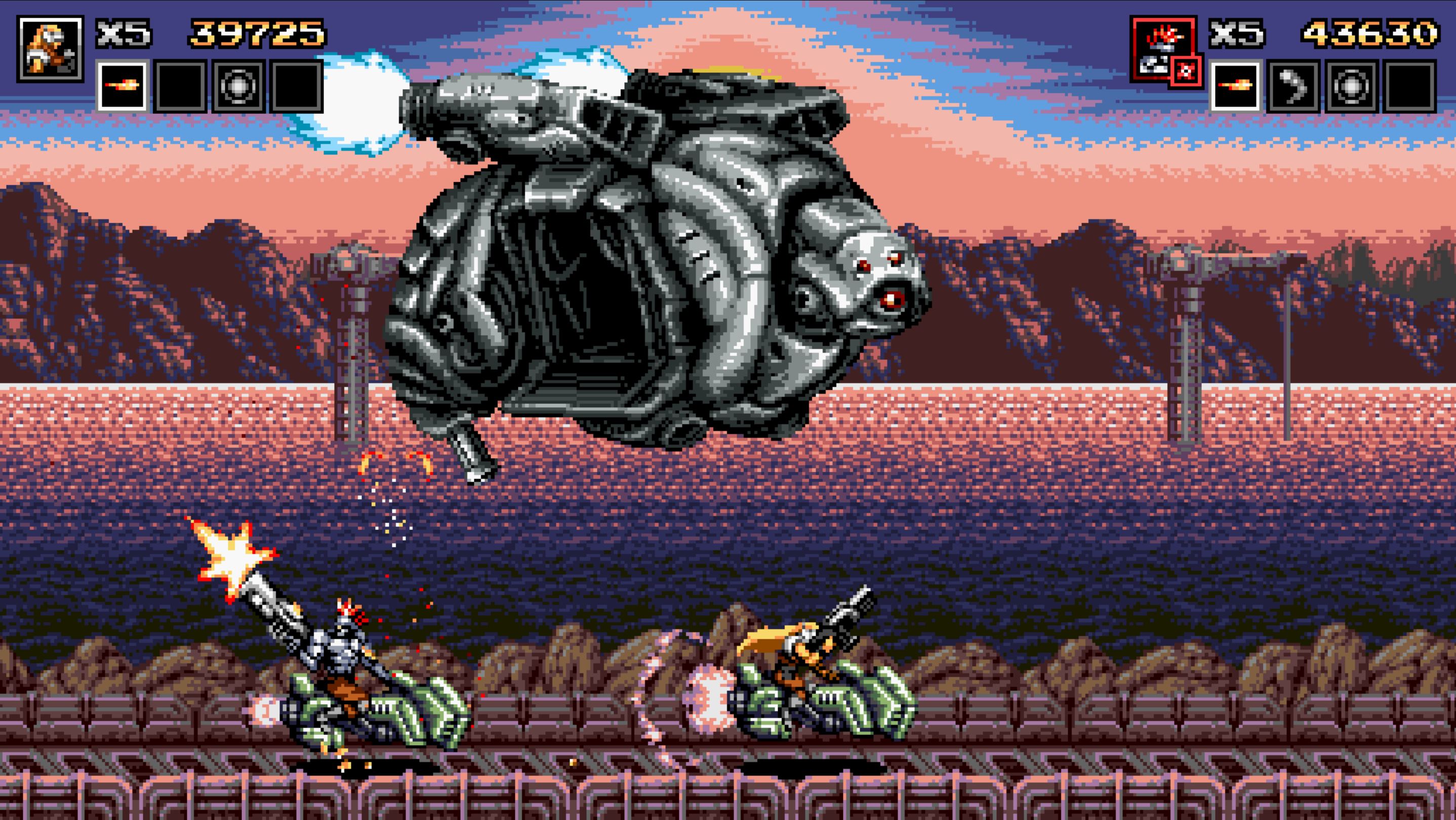 Blazing Chrome is an modern take on classic run and gun arcade classics. It’s difficult to ignore the strong influence Contra had on the game’s development, but either because of or in spite of this it’s still a lot of fun to play, especially on co-op. Anyone who wants something new with the classic Contra or Metal Slug style gameplay can’t go wrong with Blazing Chrome, but even though it’s a good time, it doesn’t really bring anything new to the party.