With eSports being as big as it is, Logitech decided to work with professional eSports athletes on peripherals that are catered to what the best players like. Logitech launched the PRO line of products, and the PRO Wireless Mouse was given direct credit for helping win a championship in 2018. The rest of the lineup included the PRO Keyboard and the PRO Headset. These devices were all meant to be light and portable for easy transportation. The PRO Headset was geared towards good acoustics and long hours of play. It was a flexible headset and wasn’t flashy as it only retailed for $100, but it more than got the job done. Behind closed doors at E3 2019, Logitech had started showing off its new PRO Headset. There are two this year, the Logitech G PRO and Logitech G PRO X and they have received quite the overhaul. More importantly, they are still affordable.

Logitech, again, worked with professional eSports athletes on this line. The team at Logitech designed many models and worked with the athletes via blind testing and feedback. This includes the smallest of details. The technology for the PRO X goes above and beyond this time, but keeps the expected aspects such as Logitech’s 50mm PRO-G audio drivers. This standing speaker design behind a hybrid-mesh material allows Logitech to change its audio engineering design. The focus on these headsets is a low distortion frequency. Logitech discovered that the low end frequency can actually benefit gamers and it shows thanks to the feedback from the athletes.

While the previous PRO passes for a gaming headset, the PRO X passes for a studio headset with gaming capabilities. Between the two headsets, the new PRO and PRO X will be nearly identical. The difference comes with the newest technology addition. The PRO X is the first Logitech headset to implement Blue VO!CE microphone technology into its products. With twenty years under their belt, Logitech approached Blue VO!CE to implement clear communications. The results are rather impressive. Blue VO!CE is integrated into the Logitech G Hub and the technology allows players to put filters on their voice. This can better help identify teammates in the heat of the moment. The mind will pick up on the frequency rather than making the player decipher who is saying what. 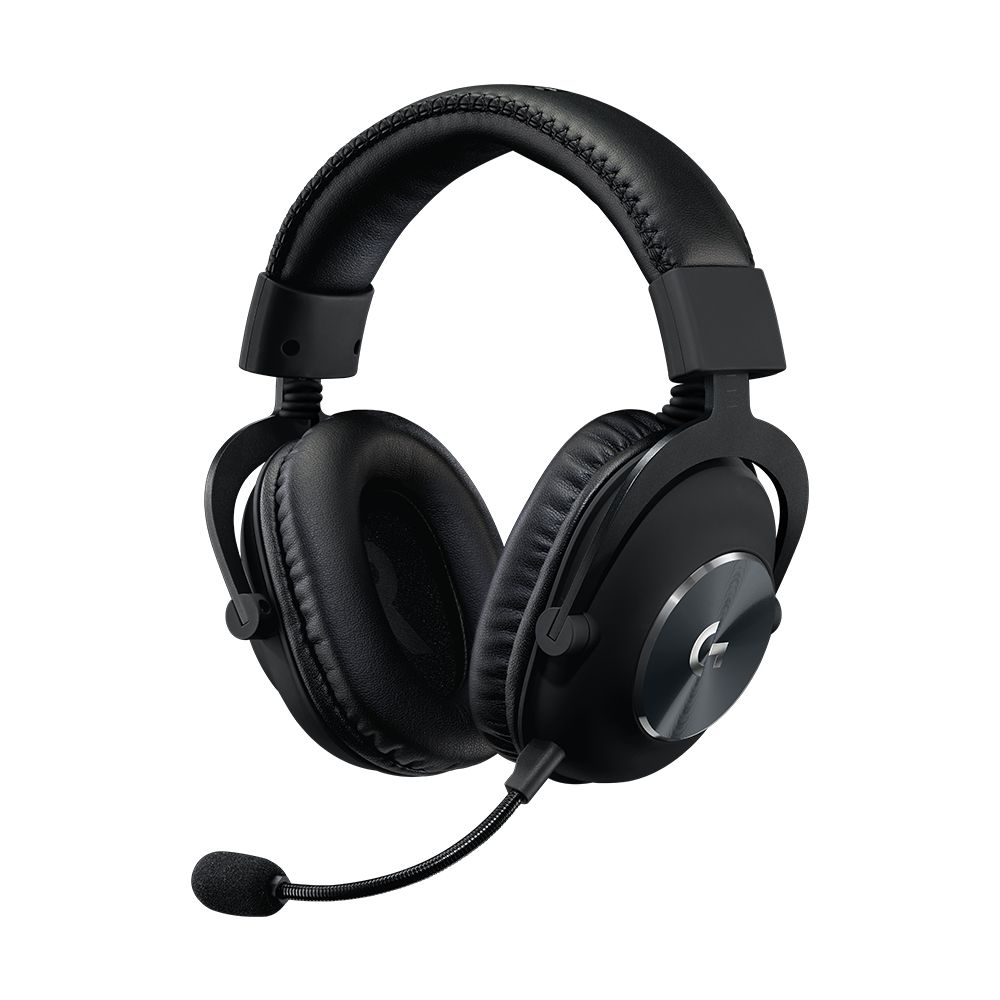 The Logitech G Hub has quite a few preset filters available to use. It includes three filters from eSports teams along with others such as AM or FM radio, broadcaster and high voice or low voice. More importantly, players can customize their voice with advanced controls or keep things basic with adjusting low, mid and high level EQs. These profiles can then be shared online, which means players can also download others’ filters as well. Some of the advanced controls include de-esser, high-pass filter, compressor and more. Multiple filters can be saved as the software includes both input microphone levels as well as output. This feels like some solid studio software here without getting extremely deep and the setup is accessible.

Having tested microphone input with a few games along with using some sample recordings from within the Logitech G Hub, the Logitech G PRO X provides clear communication that can be heard no matter how high the volume is. The playback I had from playing Wreckfest with accidental blaring music was pleasantly surprising. I could hear word for word with no voice audio being flooded out over the music in the game. Even speaking lowly could be heard with this headset, and that results is a combination of both the audio drivers and what Blue VO!CE has integrated into the software. The experience of using the Logitech G PRO X is unlike any other gaming headset I have ever used. 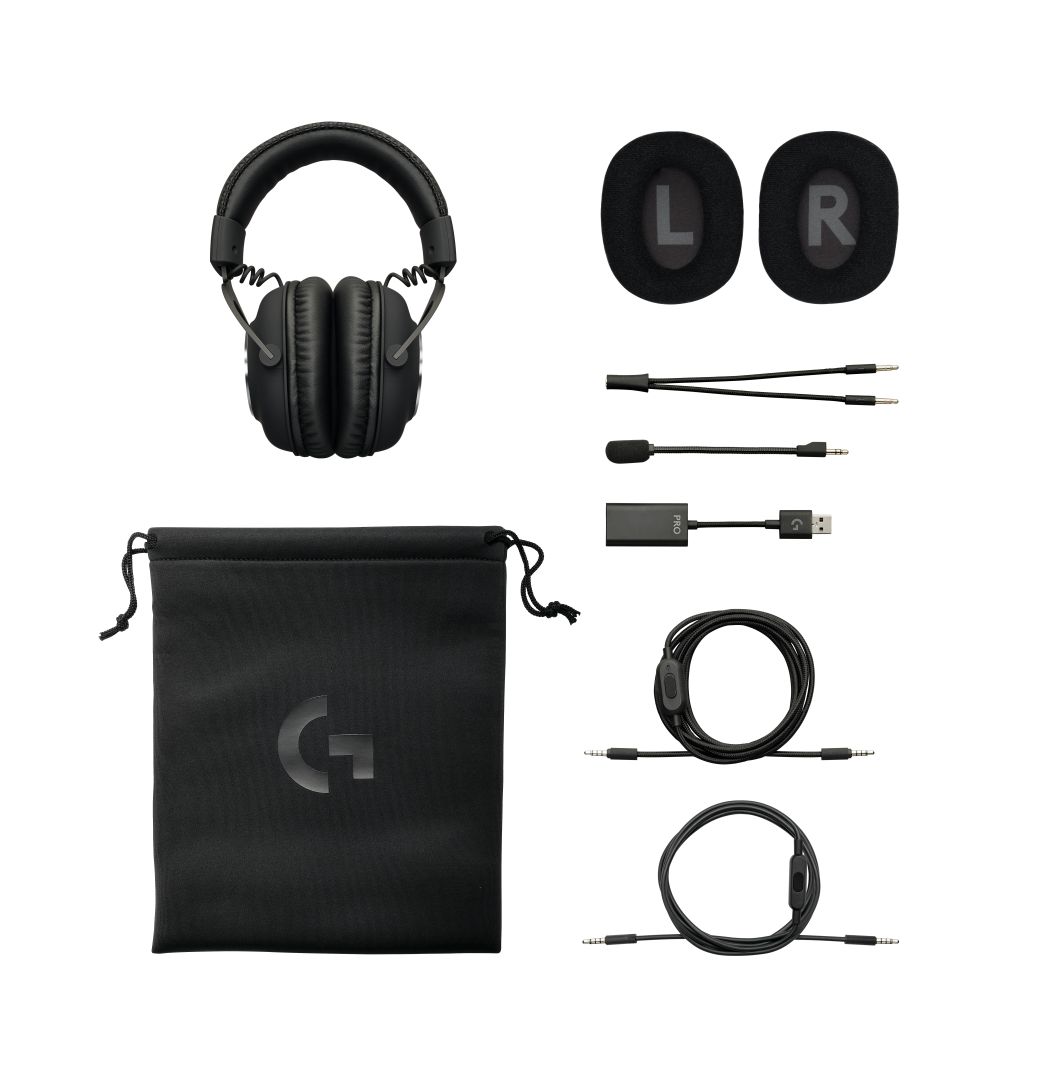 The Logitech G PRO X includes DTS Headphone:X 2.0 thanks to the 50mm PRO-G audio drivers. This helps simulate a three-dimensional environment as the audio coming from the headset sounds distinct. Sound effects in the background in areas of games will make you think someone either has music going or is talking outside your door. It sounds layered and with the 50mm PRO-G drivers, the sound effects are detailed. The original PRO Headset was designed to eliminate background noise so gamers can better communicate. With the PRO X, this feels much improved. If you’re sitting in silence and there’s a TV in another room, you’ll pick up on it. If there is any audio coming through the headset, however, you won’t hear any background noise from your actual environment. The sound quality is professional grade with the PRO X.

The look of the original PRO was discreet with matte black plastic surrounding the exterior. The PRO X also looks the part of a studio headset. The exterior ear cups are a smooth and soft black matte plastic but the cups also feature aluminum embroidering with the Logitech G logo in the center. Both ear cups, that are comprised of a leatherette memory foam, now swivel and bend with black steel to make the PRO X feel much more sturdy than the previous PRO. Across the top features that same leatherette headband with stitching keeping the steel beam intact. Even the wires that run to each ear cup are curly and it helps complete the look of something straight out of a recording studio. Lastly, the unidirectional microphone is moderate length and adjustable. It can be removed easily but only bends to certain points. 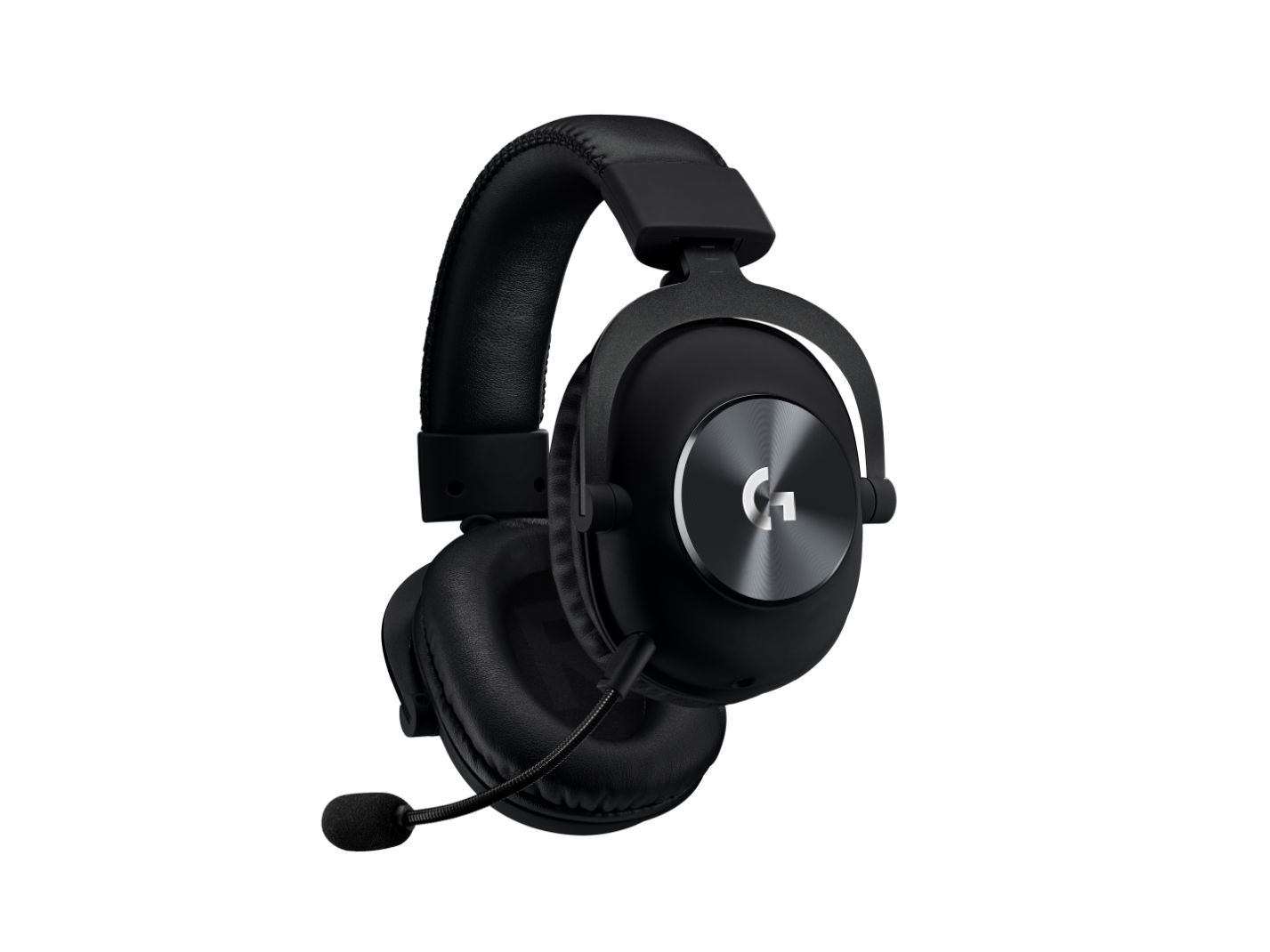 The Logitech G PRO X Gaming Headset is quite possibly the most comfortable headset on the market. Even while wearing it and typing with a mechanical keyboard, the sounds from the clicks is nearly cut by 75%. The headset fits snug on the head while the leatherette cushions remain soft and cool, making sweating a non-issue. The new PRO retails for $99.99 and the PRO X retails for $129.99. For the build quality and sound quality alone, these prices are a steal. It even ships with an accessory bag, spare ear cups and some other interchangeable cables. The USB sound card will only work on PC, but the headsets can be used on consoles. My only gripe I’ve had with the PRO line in general is how long the 3.5mm cable is. This is what eSports athletes preferred, however, based on feedback. These headsets will hopefully open the door to new directions within the Logitech headset landscape.